Today, (Monday) I was woken by our Chef Taff who needed the key to the building we would be eating in so that he could cook up breakfast. It was not long before I needed to be up anyway and so I sat myself up and started to sort out my admin….yeah really, I went back to sleep for half an hour! Around a half hour later the alarm went off and I genuinely did then sit up and square some personal admin away. Even though it was the second morning I got on a lot better this morning getting dressed, I was able to get dressed more easily than yesterday and slightly quicker but the most important thing was that I had done three nights and three get ups. Why is this so important, because it means that I should be able to go to the recruit training weekends at Wyvern Barracks. This will give me a little bit of normality back that I have lost since my accident. It also opens the doors for us to go and stay in a travel lodge or motel if we choose to go and visit people provided I take my admin stuff. I wanted to see if I would last a week, two weeks even but ultimately if I only lasted successfully the equivalent of a weekend away then I would be happy for the moment.

Taff cooked up breakfast which looked tempting with sausages, bacon, beans and more, it was before my accident in July 2011 that I last had a cooked breakfast and although I immediately thought about the `C` word, (no Alison not that one),  CIRCUMFERENCE.  I had to have it. As I was eating it I was thinking that it would not help with decreasing the size of my belly but figured I would just go for a run later to burn it off. I finished the breakfast which was delicious and then the harsh reality of truth hit me, I could not go for a run to burn it off and it would indeed sit in my belly and add to the already bigger than I was used to circumference, oh the guilt, how did I convince myself that it would be fine and I would burn it off? What had I done? I pondered for a millisecond and came up with the answer….I had eaten a brilliant and tasty cooked breakfast and suddenly it was all ok!

I spent all day today between my office and the building we eat in. I have been booking in visitors and generally trying to ensure that everything is ready when and where it is supposed to be. The block jobs were better today; the students just crack on with no complaining and smiles on their faces. I have not been to the site at all today but by the same token have not been massively busy, I think it is more the fact of everything takes so much longer for me to do. I tried to put some water on the boil earlier today which meant that I had to try to lift the Jerry can up high enough to pour the water in to a boiling pot; this did not go well but at the same time was not as bad as it could have been. I could not lift it high enough because when it got to a certain point I needed to use my stomach muscles to help keep me upright. As they do not work, this posed me a problem. I ended up just about being able to lift it on to my legs. I had tracksuit bottoms on today instead of my uniform, the reason being that as my glamorous assistant insisted on clearing my clothing and wash stuff from the shower room I had used at the country club last night, in his hast he had forgotten to pick up my boots, hence the civvies today. Unfortunately the bottom of the can was covered in crap, consequently I then had dirty trousers. Pleased that I had got the can up as far as I had I now had to lift it a little higher and pour the contents in to the pot, not easy but let us see what happens…I lift…I struggle….I put it down again….I lift…I struggle….I lift…I struggle…I lift some more….I reach forward slightly….go on….go on….falling, falling, oh bugger…I can see a face plant in to the cooker coming on…and so I had to drop the Jerry can on to the floor in as controlled a way as I possibly could spilling very little to be fair just as Taff, my Chef came in through the door. I should imagine that I looked a bit of a cock but fortunately he only saw me for as far as he could see, trying to pick it up…..which he did for me and then we finally got the water boiling!

Water now boiled and put in to the `Norgy` (the container), I had one of the University lecturers take it up to site for me as he was going, I have to be honest here, I don’t think I would have got up the hill with it in my manual chair but I would have tried. “Better to have tried and failed than not have tried at all!” Not sure I would agree with that statement 100% if I am honest but anyway, the `Norgy` was on its way to the top of the hill and ultimately to the guys and girls who were out digging in the Baltic wind. I headed back over to my `office` as I was expecting some more visitors to arrive and I too felt the chill in the air….so I put my heater on. Only an hour later and with a couple more people booked in it was time to check on how lunch was coming along and wait for the hungry to be fed. Taff is great, a brilliant chef who needs no one to be watching him and gets the stuff done well on time, it is good because it means that from my point of view I can almost forget he is here and for my first time doing this job it gives me lee way, if I forget something he has already got it covered. This just means that if I go to him and say “Have we got…” he has already done it or is ready if not already doing it. At least I know that the things are all running smoothly with regards the food and water if I do remember something late. He spoils the lads and lasses though as he does the washing up as he goes meaning that there is so little to clean after food is served that he needs no help.

John Barnard came up today and bought up a disc for me to use for the Blog. As soon as I am able I will get something uploaded which I think you will be impressed at. He stayed for a good amount of time mainly at the site obviously, talking to the students, staff and military until they all came down to have lunch. Taff had cooked up some noodle and vegetable soup which was really good, nice and hot for everyone and not too filling as they would be having an earlier evening meal to give them time for a trip to the Roman Baths in Bath. They were going to be given a private tour which had been organised by Op Nightingale. I opted to remain at the training area to write my Blog and also because I had to get someone to drive my Chucklebus which whilst would be do-able, I did not want to do it as it meant that not everyone would be in the same transport, just so that I could go. To that end I stayed put.

As soon as they get back I will get a lift to the Coach and Horses; go and have a coffee and ask to use the WIFI to upload the Blog entries for yesterday and this one for today. Upon completion of this and my drink, I will come back to my room and aim to get in to bed BEFORE midnight; chances of success…..read tomorrows Blog and find out. 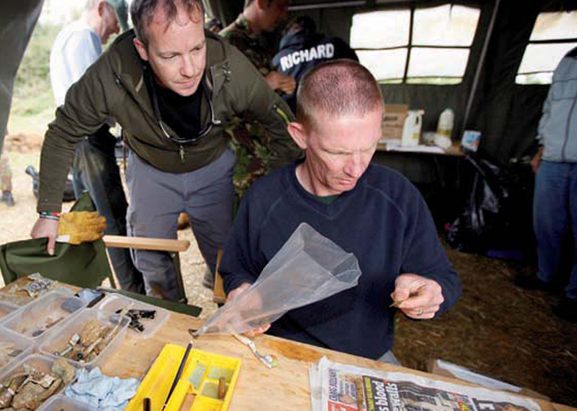 Picture of my two good friends Dave Hart (left) and Paul Turner (right) looking at items dug up on a previous dig where we looked for bits of a WW2 Liberator Bomber near Lyneham.