Christmas eve was the normal as I had previously said, I think it ended up being around two in the morning before we got in to bed. My Wife asked which of the children would be up first and what time but before an answer could be given, my Daughter emerged from her room. She walked down the hallway to my Sons room and looked inside and I did think that she was going to wake him but this was not the case. A short visit to the bathroom and she returned to her room and went back to bed, she must be growing up I thought to myself. It was six in the morning when my Wife awoke again which woke me, she was complaining about the fact that the kids were still asleep so I should have put my money on her being the first of the kids to be awake which I will remember for next year. I said that I would use this time to sort out my morning routine before everyone got up and so once on my shower chair I went to the bathroom. Less than ten minutes I had been in there before she was waking everyone up. All she had to do was wait for a half hour for me to square myself away and get myself dressed but she could not do it, too much excitement. Now this in itself is nice that she gets so excited at Christmas time and wants to get the kids up and watch them open the stocking presents but it also means that my Mother in Law is also up and it does make me feel a little awkward as I am pushing myself back to my room on my shower chair before I am dressed and simply covered in a towel. Anyway, I am finally dressed and in my manual chair and go to the kitchen to make a cup of tea in preparation for the kids to empty their stockings and unwrap their presents within.

There is one thing I will say for my kids and that is that they do not simply unwrap and stack presents, they look at them and show what they have received before unwrapping the next one and this year `Pickle` was the slowest at unwrapping the presents, she even started to look through one of the books that she had received and some of the best pictures that I took of the mornings present unwrapping were those of `Pickle` putting her head inside the stocking to reach the presents towards the bottom, bless her. With the stocking gifts unwrapped my Mother in Law left to go to work for the few hours required that day and with the unwrapped gifts in neat piles the kids were then given a few presents from under the tree. The Christmas Turkey had been in the oven since one in the morning on low heat and was slowly turning a golden brown on the top, it would not be long before it would be removed from the oven to make room for the potatoes and veg which was already prepared. My Brother and his clan came over in the morning as is the normal, the kids then get to exchange and open the gifts all together and it is nice to see them for the hour that they visit. The morning continued with the kids slowly unwrapping more gifts, we spread it out throughout the day so that they appreciate what they have been given rather than just speedily unwrap and stack the gifts and having no idea what they have received form who. My Brother in Law Tom arrived in the morning also, Danielle was working half of the day and so he was to spend the day with us until he would go to Danielle’s house in the late afternoon so we had a reasonably full house. It was then around 12 that my Mother in Law returned to our place having been driven by Danielle who popped in for a short time before heading off to her house.

Christmas dinner was great, two meats, the potatoes and veg and although it was around half the size plate of food that I would have had before my accident I still could not finish it, it is a little disappointing that I can eat nowhere near as much as I used to eat but still do not seem to lose the belly. I did not even drink too much, in comparison to the previous Christmas where I opened my Southern Comfort at a quarter to nine in the morning and had finished it by half eleven of the same morning I had actually only had a couple of glasses, probably not a bad thing I don’t suppose. The afternoon saw more gifts being unwrapped by all of us and also a visit from Alan and his clan, this I knew was going to be a good laugh and this is where we attacked the Gin, which we finished. They spent a few hours with us which was nice until they headed off home and our Christmas day came to an end.

Boxing day morning saw my Mother in Law leave for work early and us spend the day building the various Lego kits that the kids had received and the kids playing with their various presents. It is also a day where we sit and watch various films on the television or films that the kids have got for Christmas. Like many other homes, for us  it is a day for picking rather than sit down meals and eating sandwiches with fillings of left over Turkey and Gammon. The kids eat some of their sweets and I will tend to have a drink or two. Now the day went as expected, and in the afternoon my Wife and I sat at the table to enjoy a few games of Rummicub, this is when I continued to drink the Gin I had started an hour earlier. I have to be honest here, I had never been a Gin drinker until my visit to my Sister Andrea’s house while I was at the Spinal unit at Stoke Mandeville. Unfortunately I now have a bit of a taste for the Gin and Lilt drink and I am not exactly good at holding back on the Gin measure that I put in before topping it up with Lilt. Having not had much to eat during the day it should come as no surprise that I actually became a bit wobbly in my chair and with the lack of stomach muscles and nonexistent reflex arc to keep me upright I spent most of the games leaning on the table. Now this was only ever going to end badly unless I stopped drinking the Gin and lilt drink which I had become so fond of but I am guessing that my common sense had been adversely affected by the alcohol and as such I did not cease drinking the drink which turned me in to a giggling mess and was unfortunately caught on camera and posted on the social networking sites by my Wife for which I am obviously grateful. 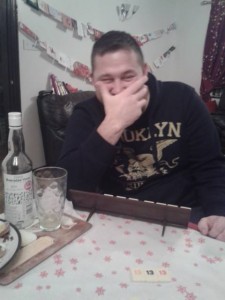 With my lack of understanding of what was happening, (or just being reluctant to accept it), I continued to drink and play Rummicub all be it badly from what my Wife told me today and then I obviously felt the need to visit the bathroom. I think this was around half nine that I went in to the bathroom. My Mother in Law came round to visit us which I obviously missed as my bathroom visit was obviously taking more time than had been anticipated so I have no idea how long she stayed, nor do I know what time everyone went to bed but at some point in time before my Wife went to bed she obviously poked her head in to the bathroom to check on me to find me parked, purely as a precautionary measure I would assume, by the lavatory and kindly took the obligatory picture and posted it for all to see on the social networking sites. 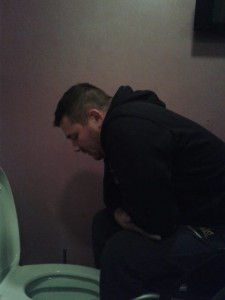 As I said, I have no idea what time the rest of my home went to bed but, I do know that it was approximately four this morning that I came to, went to my bedroom and then a further hour to get undressed and in to my pit, bad times. On the plus side, I did not fall out of my chair, which I count as a result!

This morning, OK, around mid day, I got up and didn’t feel too bad at all but I have been on a strictly cups of tea only diet today. We picked up my Mother in Law and went to Lyme Regis for a st-roll along the sea front. It was not as choppy as we had thought it would be but it was still a little rough. The wind was not as bad as I had anticipated either but it was clearly a different story on the sea itself as there were around seven wind surfers out on the waves and they were achieving a really good speed across the water. We missed the chip shops as they had all closed by the time we were ready to eat and so we headed home, dropping my Mother in Law off at her place on the way. I did have a sandwich for tea with a few chips but that has been my lot for today, I don’t think that my stomach was ready for too much more today, I must have eaten something that didn’t agree with me on Boxing day! I looked at the readout on my hoist when I was getting in to the bath tonight and it would appear that I have put on a kilogramme, not too bad but now I have to try and lose that kilogramme which is not easy now I can’t go for a run, still, could have been much worse. So that has been my Christmas. Great to see the kids enjoying their presents and noticing that `Pickle` is so much more in to exploring and investigating her presents this year. My Daughter has not put her “How to draw” book down and has done a couple of really quite impressive drawings for her first attempts. Today she has been working on some kind of troll like figure from the book and has been following the text of how to draw it. It is great when they get an interest other that the games consoles. And my Son has been playing with his Lego models and also learning to build things on his new game “Minecraft”. VERY basic graphics but seemingly quite involved. Tomorrow will be a bit more of a tidy up and I’m guessing a relaxing day ending with Darren and his clan coming round to exchange presents and having some tea.

I hope that you have had an enjoyable Christmas and that you have not put too much weight on. The next few days will be preparing for the New Years Eve where we can say goodbye to 2013, the good times and the bad. A time to make a list of things you say you will do and inevitably fail miserably at the first hurdle. So I will say goodnight now, I am off to bed a little bit earlier than last night/yesterday morning ready for whatever is going to occur tomorrow. Thanks for reading.