On Saturday, thanks to a lady called Rachel, I lost my virginity. My watching a premier league football match at a stadium virginity that is. I had been to a rugby match in Wales when I was a child but never a football match. Anyone who actually KNOWS me will tell you that I am possibly the worlds worst person to be around where footballers are concerned but my Daughter likes and indeed plays football. An opportunity arose to go and watch a football match that just could not have been more perfect. My Daughter supports Manchester United and Bournemouth, as Bournemouth seemingly did well at some point, they are now in the bit of the football table that puts them up playing against the likes of Tottenham, Liverpool, Everton etc which were the main teams when I was a child so I am guessing that they still are. Needless to say that my Daughter and my Brother (who lived in Bournemouth before moving here) are pretty excited by the whole thing. Bournemouth were playing Chelsea (which was another one of them main teams when I was a child) and I had the chance to possibly obtain some tickets for the game. I also have a very good friend who has put himself out for me on many occasions to help and also to make a point of visiting, who is an avid Chelsea supporter so the game could not have been more perfect. So I sent a message to Rachel who went through a great deal of sorting to get me 4 tickets to the Chelsea vs Bournemouth match at the Chelsea home ground, Stamford bridge. 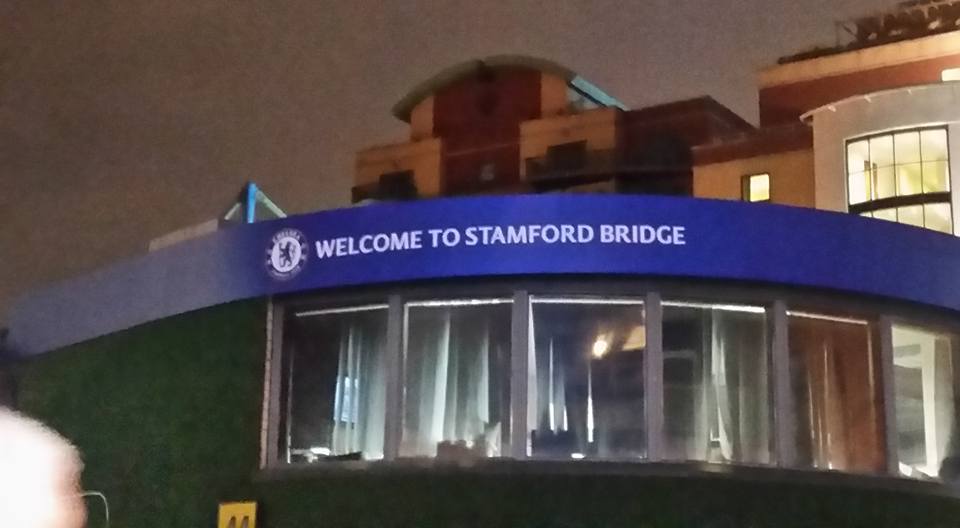 The tickets were not straight forward as I clearly cannot go in to the stands as I have my wheelchair. I wanted to take my Daughter and my Brother as I had to work on the fact that I would be in a wheelchair zone and thought that my friend would sit with me as my carer which would leave my Daughter with my Brother in the stand. We had been looking forward to it for a good while but were unsure if it would happen as it would depend on whether or not a disabled ticket could be arranged. As I hadn’t seen my friend for a while as he had been away on courses, I sent him a text to check that he was still available, and  the text I got back said…”Oh Bugger. *******’s 1st Birthday party!” Gutted was not the word to describe him but there was no way he could miss that event. As he could not go with us I asked another friend who has also helped me with several things and he accepted the invitation, this meant that I could take my power chair making the day more comfortable for me, as my Brother and friend could share the driving.

When the tickets came through the post, I looked at what the seating arrangement was and was really pleased. All four of us would be seated together so there would be no danger of losing each other, we decided to see if we could find out where our seating would be and did what you do when you want to know just about anything, we asked Google. Now there was a good a not so good and an irrelevant.

The good; We would all be seated together.

The not so good; We would be in with the Chelsea supporters (Daughter and Brother support Bournemouth).

The irrelevant; Steve watches the games purely for the sport, and I support neither and was there because I wanted to take my Daughter to a football match to watch her team.

We walked down to where we would be seated… 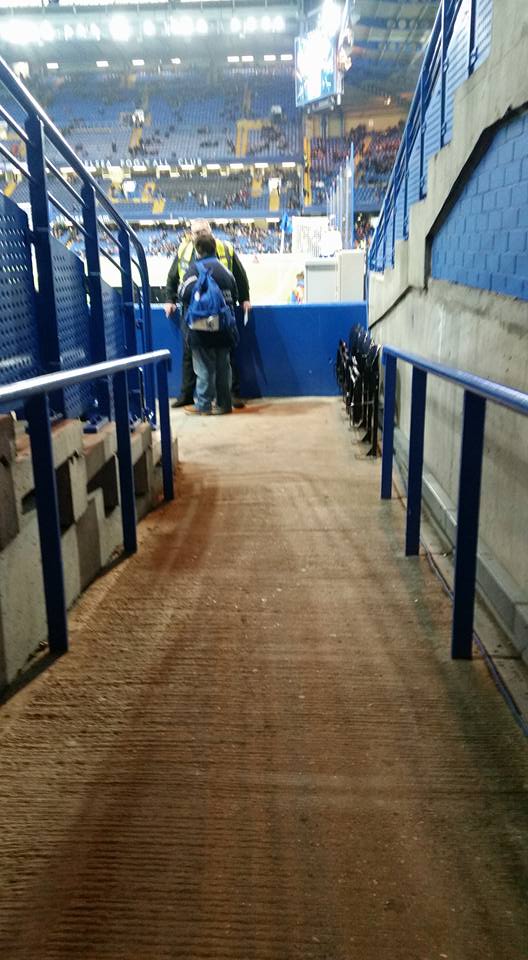 …and found our seats which to be honest, could not have been closer to the pitch… 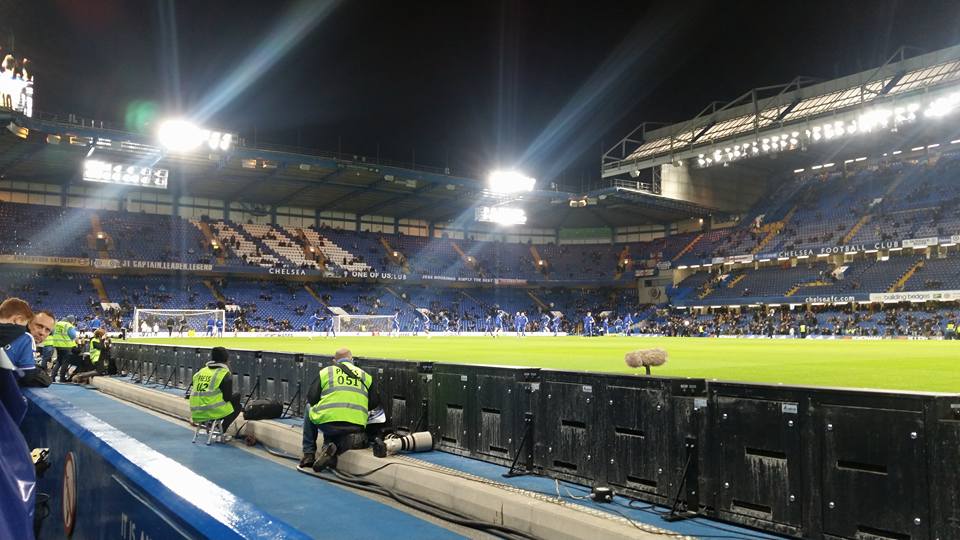 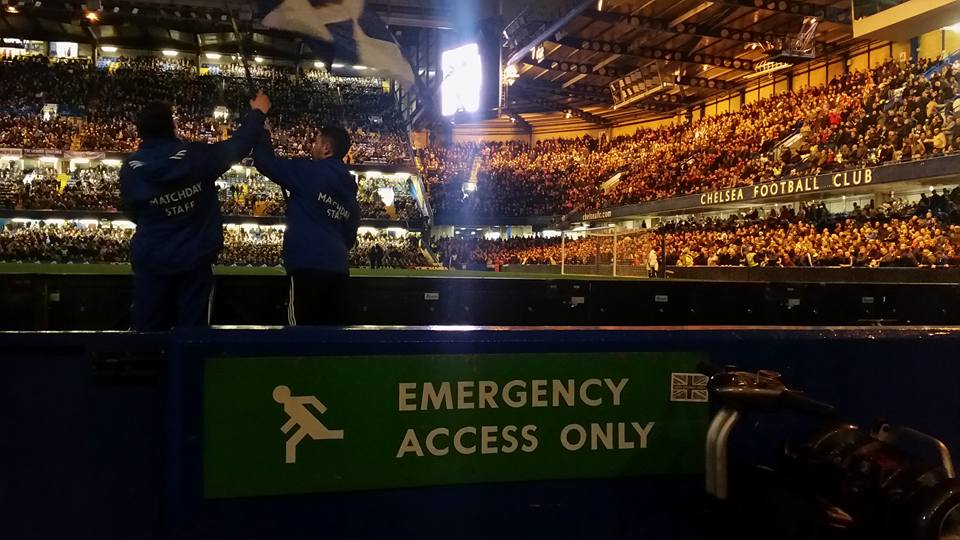 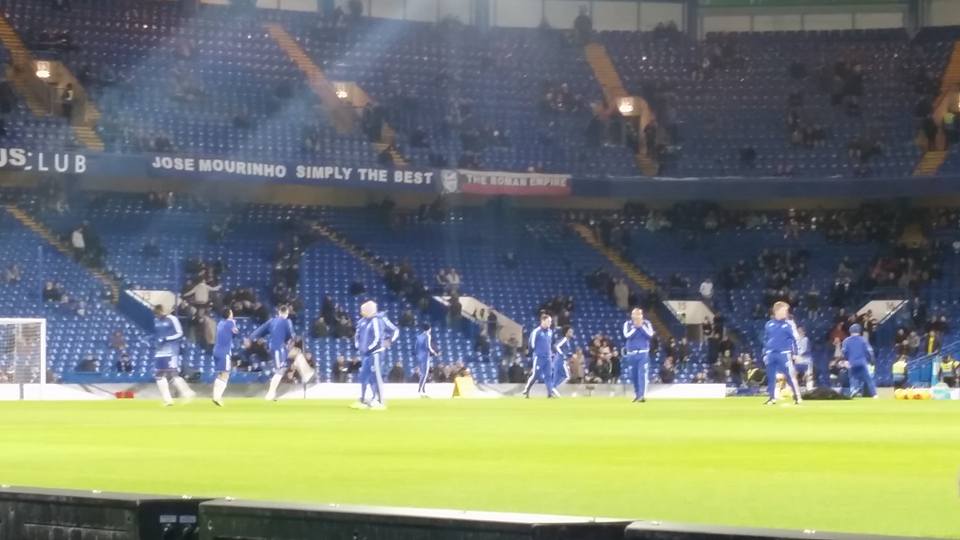 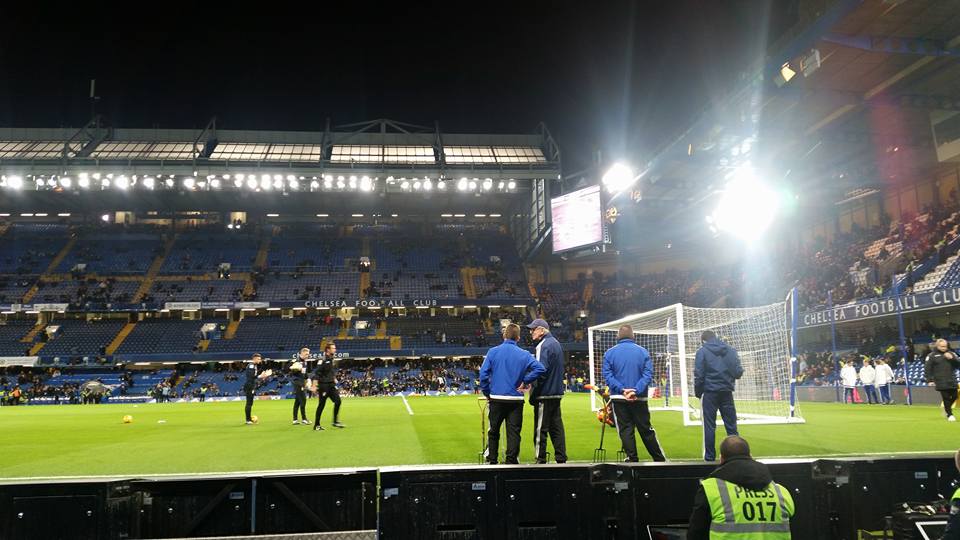 On the telebox the games are hard to watch I find. They seem to go on for ages and with the constant replays of someone kicking a ball while running up the pitch only to have another player from the opposite side run towards them and the player with the ball somehow managing to fall over, roll around like they have been shot, up until the ref comes over and gives them a kick of the ball unchallenged at which point the player is magically healed. This they replay a dozen or so times and then after saying very little of any consequence, they go back to the match. I will say though, clearly very publicly, that the match I watched on Saturday at Stamford Bridge was very enjoyable. There was a great atmosphere, very little of the roll around floor pretending to be injured and a great deal of actual professional football being played. The speed at which the ball was passed between the players at times took some concentration to figure out where it had gone. I mentioned the atmosphere; At one point one of the stewards (followed by four others, the reason will become apparent), approached a guy at the top end of one part of a stand housing the Chelsea fans who was blowing a trumpet which was all followed by the fans chanting, and tried to take the trumpet away. Momentarily the fans were not interested in the game and were focussed on the stewards. (Told you it would become apparent why he didn’t go alone). Needless to say that the steward had not impressed the fans who were doing no harm and in fact it is factual to say that the trumpet guy was getting a good reaction from the rest of the fans. There was no real reason why the trumpet should be confiscated but the steward was having none of it. This did not sit well with the fans who began chanting “Who’s the w****r (unpopular steward)…” This was amusing and must surely have been foreseen by the staff but still they insisted in taking the trumpet. The fans were still focused on chanting at the steward but this time they chanted “We want our trumpet back…” This was brilliant and I did chuckle. I am not sure if the guy was allowed to keep his trumpet but I would like to think that he was.

It was towards the end of the second half that a substitution by Bournemouth bought a fresh player on to the pitch and he promptly scored. It was at this point I rapidly looked at my Daughter and Brother whilst thinking that them cheering now would be interesting. They managed to restrain their celebrations at the goal being scored, then the match ended up going in to extra time. 4 minutes Bournemouth had to hold off Chelsea. Could it be that the match that we had come to, the match at the Chelsea home ground, could be won by Bournemouth. The time ticked, the ball stayed down at the Bournemouth end but the Chelsea players didn’t seem to be taking shots that I thought would have been worth trying for. Every shot must surely count here. I found myself looking at the clock on the large screens, the time seemed like it was taking forever. I found myself getting excited at the fact that the team my Daughter and Brother supported may win, the clock kept ticking and the ball kept crossing in front of the goal and then out towards the half way line and then back toward the Bournemouth goal, out to the line and….the whistle blew. The Bournemouth fans, excluding my Daughter and Brother, were cheering and clapping and I have to admit that I was really pleased that the first football match I had been to with my Daughter had been one that her team had won.

A huge thank you Rachel, it was a great day.