`Pickle` went to nursery this morning, she wasn’t the happiest little girl in the world for some reason, I don’t think that she was ready to wake up to be honest but after she got washed and dressed, had breakfast and then came to me to put her hair in to a pony tail, she gave me a kiss and went out to the Chucklebus. Wifey came back from dropping the kids off at school and nursery and got me some breakfast. I had to stay in bed as I had acupuncture this morning so there is no point in me getting up to get back in to bed. I finished my breakfast and cleaned my teeth just in time before Maralyn arrived for my treatment. We decided to watch Jeremy Kyle this morning during my acupuncture, we haven’t watched it for a while and so we thought it may generate a few laughs. There was a woman on there today who said that her other half had allegedly cheated on her eighteen years ago and that she refused to get married to him because of it. He was going to take a lie detector test to prove that he had done nothing wrong. He had a job to get a word in edge ways, but then so did Jeremy Kyle, and me and Maralyn both could not figure out why in the hell he was trying to get to married to the miserable cow in the first place. Furthermore, if she would not marry him for something that he had allegedly done, while they had split up, eighteen years ago, why the bloody hell was she still with him? Needless to say that he had not done anything wrong anyway. I’d have done one years ago if that had been me. It left us both wondering what exactly the point of the couple going on the show was in the first place, it left use staring at the screen trying to figure out what the point was, and I still don’t know. Weird.

So after my treatment, she went to continue with her day, which seemed to be a steady one today. Once she had gone, I got dressed and then something happened which shocked both me and my Wife, I sat up. Whilst this will seem uneventful for you, it was a massive thing for me and came as a bit of a surprise. I just did it, I obviously did not use my stomach muscles and instead used my arms, pushing with my elbows to satrt with, but it happened as if I had been doing it for years, it certainly made me and my Wife stop and look at each other as if to say, `Did I really just do that?` I transferred in to my power chair and went in to the front room. I spent five minutes just applying the transfers to my Daughter’s model Spitfire, so that one is now finished and ready to be suspended from a ceiling. It looks good actually, she has done a good job for her first attempt at building one. 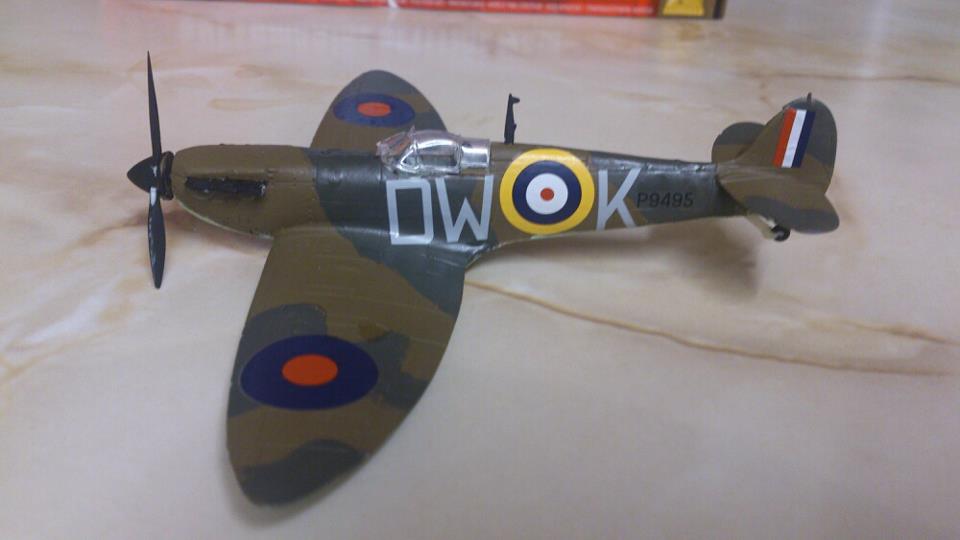 We then had a visit from the local SSAFA representative to see how we are and to collect some photographs and a DVD of the skydive I did for their publicity office. They may decide to use the pictures and DVD for advertising. We spoke for a while over a cup of coffee and I updated him on how the fundraising was going which is doing reasonably well but there is always room for more donations to take place www.justgiving.com/george-pas if you would like to help. He thanked us for the pictures and DVD and said that he would come and see us soon and would keep us informed of any developments. My wife then left to collect `Pickle` from nursery. She was a bit more lively when she returned home but had been a bit clingy at nursery, bless her.

After a light lunch it was time for my Physio to come round. She asked how things were going and then I could not help myself, I had to show how much I had improved in one week. We went down to my bedroom and transferred from my power chair on the bed. I lay down flat, waited for my spasms to stop and then I sat up. The reaction from her was identical to both my Wife and I previously that morning. She was very impressed which was brilliant. I transferred back on to my power chair and we talked about the progress I had made, even the transferring was so much quicker and less clumsy. We also discussed how I can now try different exercises for the next part of my progress. Once the appointment was complete, we made an appointment for next week and she headed off to her next patient.

I called my friend to let her know that my appointment had taken a bit longer than I had first anticipated and that I was running late to get up to her place. She was going to help me out by doing some sewing for me on my new uniform ready for Sunday and the Remembrance parade. She said that she and her husband would come down as it would be quicker and they would have coffee at mine instead. She did a brilliant job on the sewing which has helped me out no end, and while she was here, my Wife returned with the kids from school and another friend popped in for a coffee and a chat. Half an hour later and he had to go which then meant I could go and spend a bit of time with my friend and her husband. Next my Mother in Law came round to check that we were going out for a meal tonight and that she was going to have the kids with her for the evening. A bit of a busy day today with visits and appointments, but it makes the day go by.

And so tonight we went for a meal with friends, it has become something that we all try to do every month to six weeks. It gives us a chance to catch up with each other, have a really good chat and get away for a couple of hours. The location is ideal, the staff are friendly and the food is very good. The convenient location of the pub means that we use it each time we go out. It was a really good evening again, and I look forward to the next time we go out. There were a few funny moments during the evening, but the most amusing had to have been when we were told how one of our friends their tonight had been asked if she was the Grandmother of one of her own children. She did not seem particularly amused by this, but it certainly got a giggle from the rest of us, even my Wife and I despite the fact that we actually are Grandparents!

And so we returned home to a quiet bungalow as the kids are staying over at their Nanny’s tonight. So it was in to bed, where Wifey is catching up on sleep and I am writing the Blog. A really good day with a fantastic surprise and sense of achievement for me after managing to sit up from laying flat. A real show of progress. Things can only get better and I can only get stronger and achieve more, can’t wait to see what I manage to do next.