As we know, I was led astray last night by two very bad men who wrongly encouraged me to spend `an hour` on the x box on line playing a game together. This turned in to three hours and I had to cut my Blog short and write only about Wednesday.

Darren came round and collected me on Thursday morning and we went off to the gym, I have not abused the trial this week, I know what equipment I can use and have used them well in the hour I have spent there on each of the two occasions I have been. I really did work hard again as I think that you need to work hard and push yourself or it is a waste of time going. I am unable to reach the bars for certain exercises that I do but Darren helps by handing them to me and changing the weight when required. He also helps by changing bars around which means that I do not have to and keeps a check on the exercises that I am doing so as not to repeat them. I am hoping to join the gym but I first want to talk to them as I will be limited to equipment I can use and the times I can visit as I do not want for my wheelchair to be in the way of other members. As I am not in employment I can move my timings around easier than those who work and so it would be ignorant of me not to as long as it is not a time that is inconvenient to me.

With my hour workout done we got back in to the Chucklebus and headed off to Seaton. I spotted an air rifle in a shop there almost a year ago, I pop in to the shop when we visit Seaton for a general look round but a month or so ago I went in to have a closer look, the shop attendant took it from the rack and showed it to me. The weight was too much for me to hold in the aim as I have zero active stomach muscles to keep me up but I was comfortable and stable with my elbows on the inside of my legs. I asked some questions about it and eventually tried two more but it was the first one that I looked at which was the one I kept going back to. I left and have visited once since then, but I saw another in a different shop which I looked at and held. It was lighter but did not feel of the same build quality as the rifle I had seen and held previously in a different shop. As we were in Seaton I decided to revisit the shop which had been selling the rifle that I had held before and it was still there. It is double the cost but of superior build quality and the fact that it had been unsold for so long could only work in my favour. I spoke again to the attendant who said that he did remember me (I don’t imagine that there are too many wheelchair bound guys who enquire about air rifles but I could be wrong), and he remembered immediately the rifle I had shown interest in and wasted no time telling me. I was so tempted to purchase it, a really nicely built rifle which I would be able to practice shooting with but I exercised some control and decided to check with Zero Alpha, (a.k.a the boss, a.k.a my Wife) as I did not want to spend the money without discussing it with her first. Deep down I know it will not happen and that is why I did not buy it. We finished our look round and went back to the Chucklebus where Darren attached the straps to my power wheelchair and strapped me in. I had to take the power chair due to where we were going next.

We drove to Exeter Disability Centre on the Marsh Barton trading estate which is where I purchased my manual wheelchair as I have had it for around a year now and I wanted to get it `serviced`. It is how I get about and just like you would get your vehicle serviced at least once a year, I rely on my wheels and the chair that they are attached to and so a service to check everything is in working order is worth the money, especially if they find something wrong. We arrived five minutes before the appointment time and Darren pushed my manual wheelchair in to the shop while I followed in my power chair. I spoke to the guy who would be carrying out the service for me and handed him my latest addition to my wheelchair. I have just taken delivery of two new wheels which are wider than the wheels that are normally fitted to my chair and have chunky mountain bike style tyres. They have a kevlar band fitted inside the tyre to defend against punctures and they, in addition to my third wheel, will allow me to move over grass and slightly rougher terrain. I will use them for my trips down the cycle path to see how they are. I hope that they will become my outdoor wheels for if it is wet certainly, but maybe for each time I make a trip outdoors, depending on distance, if they work well. Not a cheap addition to my chair but unfortunately I am unable to simply change my shoes depending on terrain, and so I require new wheels or wheelchairs. I have not used the new wheels yet but as soon as I do, I’ll let you know how they were.

We had around an hour to spare while the service was done and so we decided to pop off for a coffee somewhere. Marsh Barton trading estate is the size of a small town and not the easiest place to find your way about in if it is not somewhere you go to regularly, one place I do know the location of though is a motorcycle shop that I used to ride to for a coffee and a look round if the mood took me and so that is where we ended up. I looked around the bikes and we sat and had a drink and then Darren showed me a poster for an event that the bike shop has organised. It is to educate people on the actions they should take if they are unfortunate enough to be the first on the scene of an accident involving a motorcycle. I asked about the event that I had just seen advertised and got talking to the young lady behind the desk, (she was one side and I was the other, I was not talking to her behind the desk because that would be weird!), the conversation took a turn and we spoke about why I was in my wheelchair. The young lady called the events organiser and we spoke. During our conversation I informed him of my interest in speaking to scooter and new larger bike riders in the hope that I may educate them about the injuries I sustained at low speed despite wearing the correct protective clothing in the hope that they would think twice about riding without protective clothing. He was interested in my idea and asked for contact details for me which I gladly gave him. I thanked him for the interest he had shown to me and shook his hand to end the conversation. As I was walking, (well rolling actually since I can’t walk, how did I forget that one???), he called after me and asked if I would attend the evening event which we had been discussing. I am going to go if I can get a driver as I have been invited to go but also as I am interested to see how the event goes. By showing support for the event I hope that they will invite me to another event which may lead to an opportunity for me to talk to people about the importance of protective clothing or on the flip side, the importance of car drivers being more observant on the road and to make a point of remembering that there are vehicles with only two wheels on the road and they have equal right to be there, to that end they deserve to be given the same courtesy that would be afforded to other vehicles and be looked for. It was actually over an hour that we spent at the bike store and so with that in mind we returned to the Disability centre to see how things had gone with my service.

All in all it had gone well, and showed me that I had made the right decision in booking it in. I do a lot of mileage in my manual chair because I try to keep fit as well and it was apparent that my trips down the cycle path had taken their toll on the chair. The general condition of the chair was fine, no fractures in the frame and no problems with the back folding mechanism, my main wheels were fine with no bent spokes or damaged bearings. The same could not be said for one of the front castors. It required a new bearing and axle. If this bearing had failed completely then it would have made it difficult to propel myself and would have put my wheelchair out of action until I had new parts delivered and fitted, so you see, wheelchairs need servicing too! It was not even expensive, and I managed to get new axle pins for my new wheels meaning that I do not need to adjust the spacer bolt on my regular axle pins which I was not happy about doing. Knowing that things do wear on the chair it is a service that I will definitely ensure I have carried out once a year.

We drove back to the bungalow and later in the evening I had a visit from my friends Matt and Anji and their kids. They had come for a catch up as we had not seen each other since Christmas and they brought over a Birthday card and a present which was really nice. While they were with us we had an unexpected visitor who ended up staying the night in my en suit bathroom after taking some advice from the relevant organisation. 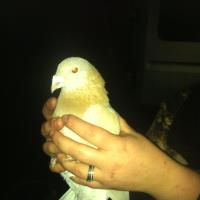 The bird had a tag and was obviously a homing pigeon who was too tired to fly any further and had sought refuge on our doorstep. It simply could not stay there as it would be likely that it would be eaten by a fox or a cat, it was not phased when my Wife walked to it and so we called the local RSPCA who advised the best course of action would be to give it a warm place for the night and then release it in the morning, and so that is what we did. Anji picked the bird up and between my Wife and Anji they made a nice warm bed in a box for the bird, ensured there were plenty of breathing holes and put it in the bathroom in my bedroom for the night. It would at least be safe form attack during the cold night. 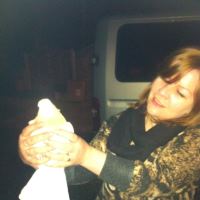 And so that was Thursday. A busy day, a constructive day and a day that we were able to help a cold and tired homing pigeon. Our good deed for the day.