Last night was the `B` Company Christmas party, a time when you can take your other half to mix with the other partners of the members of our TA Company. A time for new friendships to be born and older friendships to be strengthened. I have always been someone who will bang my gums to all about commitment to the TA, if you are willing to wear the uniform, take the pay and tell your mates that you do it, then you should commit to it, train as much as you can and support your fellow Company and Battalion members. There are two events during the year which I believe and pass my belief to any and all, that you must attend. The first is the Remembrance parade, this needs no explanation as to why and should be something that you would want to participate in. The second is the Christmas party, this should be attended by all as it gives the opportunity to take the other halves to meet and catch up with others which creates support networks for when you go on tour, and is a time when the Company can let its hair down, drink copious amounts of `cola` and do the “squaddie shuffle” in front of the disco with out the concerns of who is watching how crap you dance.

Last night was brilliant for me, my Wife drove as she does not drink and we took along two great friends, Matt and Anji. Matt is an ex member and so it is nice for him to catch up with old friends who he did his training as a recruit with. We arrived and got ourselves a table, very soon we were joined by one of the lads I trained who had just returned from a promotions course, and his better half. It was great for my Wife and Anji to catch up with Andy and Alison, and it became apparent very quickly that this was going to be a really good laugh but also potentially messy. We were so well behaved for around a half hour until I ordered us some Jaeger Bombs and from here on in it was obvious that we would be getting a little tipsy but a good laugh was inevitable.

The evening kicked off with some goodbyes. Two Serjeants were ending their TA careers. One is technically HQ Company as he is REME, a mechanic, but as he paraded with us and works as a civilian contractor looking after our vehicles, he has always been regarded as `B` Company and so it was fitting to present him with a parting gift. I am glad that he is still going to be continuing his civilian job as it will mean that there will be plenty of opportunity to see him. The second is a Serjeant of `B` Coy who I have a lot of respect for. He has to be the first walking GPS I have ever met, he is clever and always did or said something to make you chuckle. He will be missed by the Company, members who barely knew him and those of us who knew him well will all miss something about him as time goes on. I wish Nigel all the best, and loved the letter that the OC read from his file. I laughed my ass off as it was read and still have the events described playing over in my head, I think it will be a while for them to disappear!

After the goodbyes it was raffle and prize draw time. For the star prizes there were forfeits for the person who had their number drawn, however if the number drawn was for the partner of the serving soldier, then she could nominate the soldier to undertake the forfeit, which is nice. The prizes were really good this year and whilst my Wife and I did not have our numbers drawn for any prizes we did win the first prize on the `money tree` which was great. After the raffle and prize draw it was time for the buffet, as it was upstairs my Wife went up to get me a plate of food but while I waited down stairs for her, the lads asked if I wanted them to carry me upstairs. It was not necessary as Wifey was already on the case but it was great of the blokes to ask, and this is what I have referred to before about it being a second family.

Food was eaten, drinks kept flowing and then it was time for the dancing to start, and start it did, and the more drink that was consumed the more people ventured on to the dance floor, and then it happened. I was kidnapped. 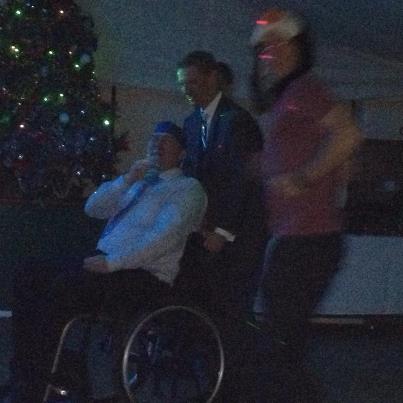 I was moved from my position by my table to the dance floor where I was encouraged to join in, now I would not dance when I was able bodied so quite what they thought I was going to do on the dance floor in a wheelchair I had no idea. So while they were laughing and joking doing their dancey thing, I popped back to my table and had a few more to drink. I was of course led astray by Matt and Anji who are a bad influence! After a few more drinks and a few more jokes and stories, the evening was being enjoyed by everyone. 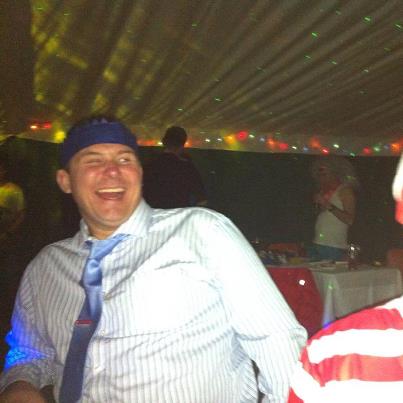 Before long my friends were hijacking me again and I found myself back with them on the dance floor, the lunatics. 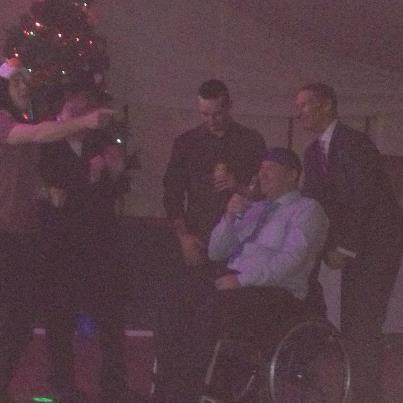 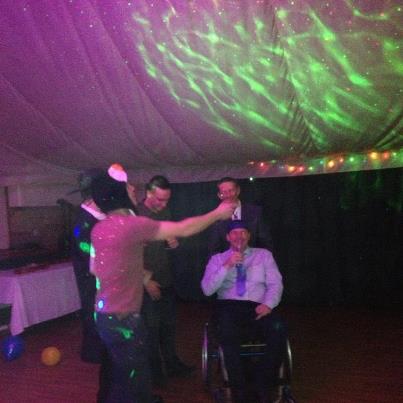 We left at the end of the evening having had an amazing time. The lads helped me down the steps and Anji, Matt my Wife and I got in to the Chucklebus and headed home. We dropped Matt and Anji off at a time which I could not begin to hazard a guess at and then arrived home at the bungalow at a time which I have no idea about. Matt and Anji gave me a little present which was lovely of them. I now have an Apache helicopter model which is bigger than I thought it would be, and I am looking forward to building it. I am truly grateful to them for the gift, and it has put my mind back in to model mode. I have been busy with various things lately and have had little time to continue the model building. The Liberator is so close to being completed it is not true, the Seahawk has not been playing ball in so much as the white colour for the underside will not sit correctly and so I have rubbed it down ready to mask up, re prime and then spray. Once these are done, the Spitfire and Hurricane will be next which I can build concurrently. There will then be a Huey helicopter and the Apache which I may do together before I turn my attention to the Sea Vixen. But no plan survives first contact as they say and so we shall see what happens.

Today I woke early, half past six needing my Wife to help me get to the bathroom, which she did. I felt bad about having to wake her so early, especially after the driving she had done, the very late night and having to help me to bed, but I had no choice. Getting on to my chair and in to the bathroom is not the problem, it is getting my chair in the first place, that is why I had to wake her. She left me in bed after she had got up bless her, I am either very lucky to have such a wife, or she prefers it when I am asleep, only joking, I am a lucky guy. I did feel guilty though when it was mid day when I woke. I got washed and dressed and then I asked my eldest Daughter to get me my chair and I got up.

My Son and I went to the local supermarket to do a bit of shopping and to get something for roast dinner. He was so helpful, he only hit three people with the trolley!!! He helped pack the bags and then we walked back to the bungalow. We unpacked the shopping and I had a cup of tea and then we took a walk down to the local DIY place to return something. We played some guessing games as we walked to the store, he helped me crossing the road by looking up and down the road and going ahead to the crossing and pressing the button so we did not have to wait so long for the lights to change. After we had returned home, my Son, eldest Daughter and I went down the cycle path a mile or so to give them an opportunity to get out on their pushbikes. We arrived home in perfect time to help with serving the roast dinner, and it was brilliant. Roast pork, potatoes, veg and Yorkshire puddings with gravy, amazing.

And so after a very late night with the party, and a good amount of time in the fresh air today I am finishing up this Blog entry to retire to bed. If you have a Christmas works party then I really hope you enjoy it. You don’t have to have a lot to drink to enjoy it (although sometimes it helps), but you do need to have good friends to enjoy it with, and with the right friends it will be something you remember and talk about for years to come. If it does not work out that way, then maybe your friends are not quite as good as you think, thankfully for me, I know that I do not have that problem. My Christmas party was not just with good friends but with friends who I regard as family, and a bloody good family at that.