Had a full day in bed yesterday (Sunday), woke with a headache from hell so took pills and went back to sleep eventually rising at half five in the evening despite still having the headache. The day had passed me by which was a waste but I had things to do and so to that end I would just stay up for a while. The main thing I did yesterday or rather this morning was to add photographs to sets on Op Nightingale’s new Flickr page. I had to trawl through over eight hundred pictures and put what I could on and then arrange them in to sets. Not being very good the laptopamabob, this was a bit of a headache to begin with but after a short while I had it sussed. Have a look at what we’ve been up to. I do have the Roman baths visit to add yet but there are still others to see. Here is the link for you.

Over time, more sets will be added so please, have a look and support Op Nightingale. It has given me an idea for a Flickr account for my Blog but we shall see. It would be somewhere that I could upload and store pictures of my progress on different things, something I wish I had done from the start because sometimes it is hard to remember how far you have come, and preparations for challenges and fundraising events. I need tomorrow to write an email to start the ball rolling for the next event, I am really excited about it. It is something I have never done before, have never even thought about doing until now but will be a massive achievement for me if I get to do it.

It was three thirty this morning before I went off to bed, and a furthur two hours before I don’t remember seeing the clock because of my spasms. I saw a poem yesterday that I chuckled at, I had to steal and modify it, the result was many people chuckling at it. See what you think…..

My nookie days are over,
My pilot light is out,
What used to be my sex appeal,
Is now my water spout!
Time was when, on it’s own,
From my trousers it would spring,
But now it is a full time job,
To find the bloody thing!
It used to be embarrassing,
The way it would behave,
For every single morning,
It would stand and watch me shave!
Now due to Paraplegia,
It really drives me crazy,
To know it rests it’s little head,
Because my bodies lazy!

Anyway, I had an e mail from one of the University lecturers today with a little insert for the Blog, so now would be a good time to share that with you now. 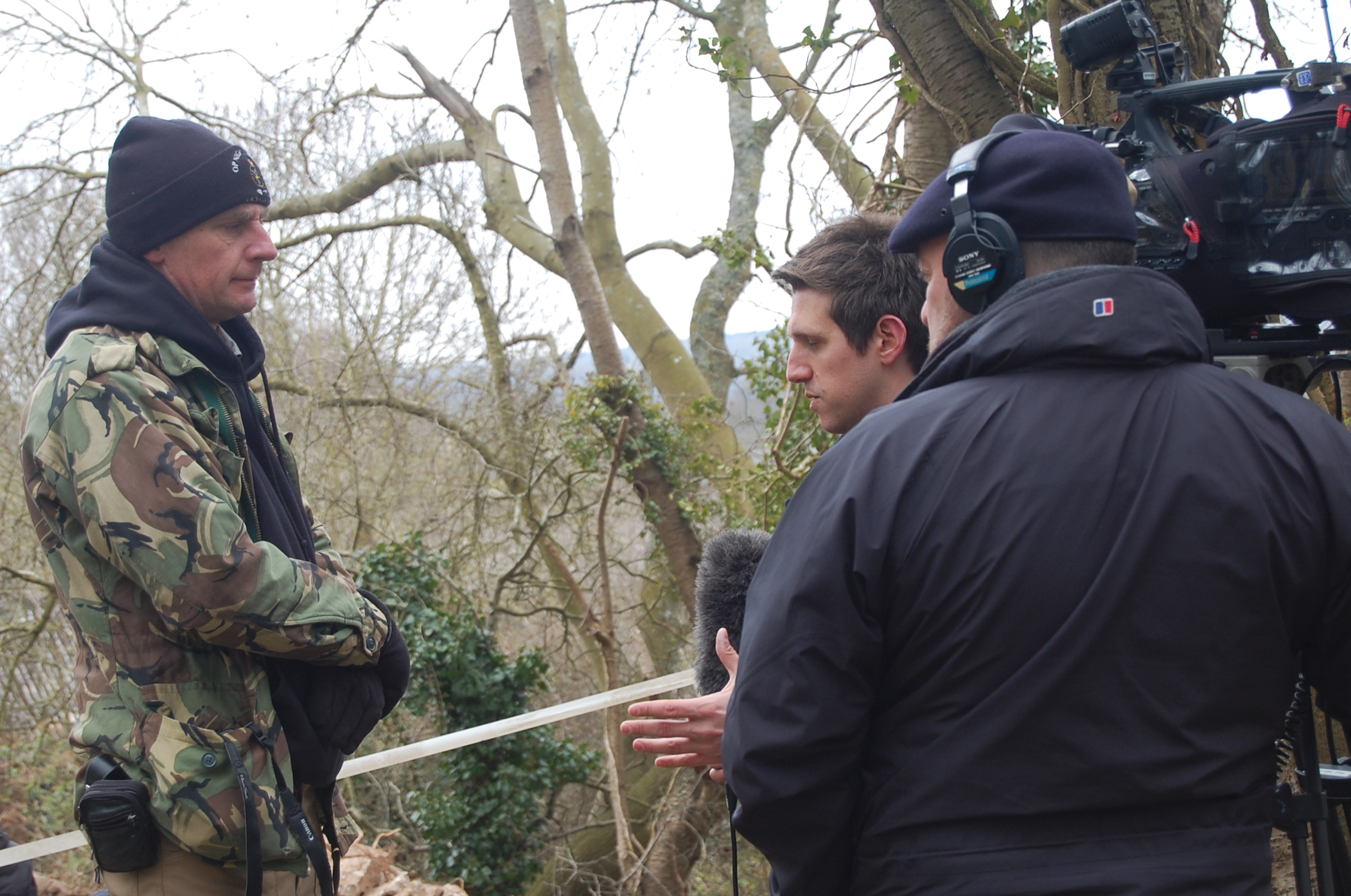 “Well, the University Land Rover has hauled me, the students, and all our kit back to Leicester for a well-earned rest, after an intense and thoroughly enjoyable two weeks digging at Whitewall Brake with Op Nightingale. We knew from past experience at Caerwent Training Area that there would be some great archaeology to discover, and the Roman building(s) did not disappoint. Still, I was worried how we might all cope with days of sub-zero wind chill accompanying the unseasonable weather. But this is exactly where the likes of us really can get so much from working so closely with soldiers; all of us picked up valuable top tips from George’s excellent group talk on choosing kit and how to dress for challenging field conditions! Then there were the wonders our Army chef Taff produced for us from his field kitchen at the end of each strenuous day; pork and black bean stir-fry, hot trifle… And of course there was the actual fieldwork itself; I had not worked with DIO archaeologist Philip Abramson before, but that proved to be a real pleasure, as from experience I already knew digging with the soldiers would be–so I was confident the students, most of whom were Op N newbies, would also enjoy themselves. In the event, we all had a total blast; Diarmaid Walshe’s Cunning Plan of designing a site team balanced between soldiers and civilians worked outstandingly well, promoting team building and high morale. Or in less officialese terms, everybody really did work very well together, and learned a great deal from each other, with students and soldiers developing their archaeological skills side by side. Despite the cold there was a great deal of banter and laughter on site, while an impressive amount of valuable work got done. And in the evenings, with some beers over dinner, chatting round the Burco in the brew room, and during visits to the Coach and Horses in Caerwent village, a lot of serious stuff got discussed too, and new friendships were forged. We all went to Caerwent anticipating some interesting archaeology, and hoping we could also make a contribution to the aims of Op Nightingale in supporting injured soldiers’ recovery. Again, from past experience, I was confident that we would be able to play our part with this; but I think many of the Leicester contingent were surprised at what a big, very positive impact working and playing alongside such a brilliant bunch of guys would also have on US! So here’s to the next Op N exercise…”

Today was full of nothing really, we had to go to Taunton to sort a couple of things out. I went to get some information on a couple more vehicles for me to research in readiness for my hopeful return to driving. And then I read the sad news that Baroness Margret “Maggie” Thatcher, A.K.A “the Iron Lady” had passed away. The television, the radio and the internet have been alive with people arguing that she was loved and hated. Not being a huge fan of politics was irrelevant, in my opinion it was the last time that our country had a leader with a set of balls. She stuck to her guns, she stood for what she believed in and was not walked over by anyone. Look at the Falklands conflict, against all advice she assembled and sent a task force, commandeering the QE2 and turning her in to a hospital ship. She knew that there were British citizens on the Falklands who deserved their countries support and so she sent it. If only we had leaders like that today. I know that everyone has their own opinions and I am by no means saying I agreed with everything that she did, but no one can deny that she had balls.

And so that has been the last couple of days. Nothing really to report of any substance. I have some mixed feelings about different things at the moment which gives me things to think about, a bit of a washing machine inside but nothing I can put in to words or make sense of which is frustrating, worrying, and causes some anger. Things I want to remember and thoughts i do not want, I guess this is how you progress through life after your injury. Anyway, time for the land of sleepy bo bo.