A smile on my face at the end of the day.

This morning was going to be different, everyone up, dressed and ready to go before 09.00 as usual. This time however my son was off to the hospital in Chard. He had to be there early for an x ray. Yesterday at school he was playing at break time and fell over, he had scuffed his hand removing some of the skin and as a result he had to have some plasters on which the school kindly did for him. Whilst he was was waiting to take part in his swimming lesson yesterday afternoon after school, he was worried about his hand stinging in the pool. After some reassurance he smiled and went off to take part, Then at tea time he kept saying how it hurt. I kept telling him it was only skin removed and that it would be OK but then he got very upset and started to shed tears. I called him over to me and looked at his hand, I’m no expert but when fingers swell like his had, it is a pretty good combat indicator that the probability of a break is pretty high. So wifey took him up to A&E and they had a look. They strapped them together and advised he return in the morning for x ray. The x ray was taken this morning and they have put his arm in a sling to elevate his hand to relieve the swelling. They are waiting for a specialist to view the x rays to be sure of what he has done. So while he was with the wife doing that, me and my daughters went for a walk towards the hospital to kill a bit if time in the hope that we would arrive as they were finishing and then we would take them to school. This worked quite well and they eventually arrived just after 10am.

Things started to go to rat shit then when we returned home. My back was very uncomfortable, painful even. The only way to describe it is that it feels as if the rods in my back are trying to poke out through my skin on the right hand side and pull out of the vertebrae on the left. NOT NICE. Then I had some potentially bad news in an e mail. Some crappy news in a letter and it just really got to me. It seemed like a lot of what we had achieved was going to not work out how it had been planned. For a while I really started to get down, and I could feel it happening which made me angry and more down. This made my wife worry which got me down further, she doesn’t need to be feeling down. I called the people who sent me the crappy letter and the smug git on the end of the phone unfortunately “pulled the pin”, the more his high and mighty attitude was received by me the worse he made it for himself which caused the fly off lever to go and approximately two minutes after that happened the explosion followed and he had it. Patronising little p****. I do not like being talked down to, I endeavour to treat people as I would like to be treated and believe me that can be a struggle nowadays, but I try, but this guy, don’t think he will be writing again.

I “kicked myself in the ass” to snap out of it and went outside for a breath of fresh air. When I came back in I picked up the model Harrier I’ve been building and the Liberator I recieved the other day in the mail. I took them to the garage and decided to spray them with primer. This would enable me to repaint the Harrier and also paint parts of the Liberator such as all the parts needing to be black. The boots of the aircrew, propellers, guns and tyres. As well as this there were some silver parts like the undercarriage. Because I have primed them, the paint takes a lot better and gives a much better finish. Whilst I was carefully painting the aforementioned pieces, my wife and Mother in Law were cutting the grass and generally getting the garden ready for winter. I try to occupy myself when they are doing things like that as it is frustrating knowing that I can’t help my wife like I should, it’s just lucky that my Mother in Law enjoys helping and spending time with us.

My Brother came round earlier, general chit chat and take the piss out of me, not totally one sided though and for the years I leathered him because I was really slim and relatively fit, I guess this is payback. Karma does exist, so be careful! He is going up to Bournemouth on Saturday to pick our Stepbrother and our Nieces up to bring them down for the Ilminster carnival. They can stay over then until Sunday, he came to see if I fancied going along. We are going to take my youngest and my Brothers youngest to call in and see our Dad while we are down there which will be nice. Should keep us out of mischief for the day…..maybe.

So I managed to pull myself out from a bit of a dip today with the aid of wifey, and then, as I thought my day could not pick up anymore I received an e mail from Mission Motorsport. This did put a smile on my face I’m not going to lie. And then, I received a message on my Blog too. It just goes to show that just when you think you’ve reached the highest point of the day, something can always boost you that little bit higher. 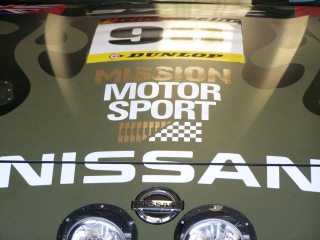