Decided to accept an invitation from a friend to go out for some food and a few drinks on Thursday being as neither of us could remember the last time we had, and came to the conclusion that it must have been before my accident two and a half years or so ago. We met up at mid day and had a cracking grill for lunch, it definitely filled the void in my stomach and so to wash it down I had a pint kindly bought by Alan. We had a couple more and then decided to pop in to the pub across the road for a few games of pool. Despite Alan potting the black three times, I was winning two games to one and so we had another couple of games. It was hilarious, I couldn’t look down through the the line of the pool cue and could not see the balls from above to work out angles so it really was hit and hope, some of the balls I managed to pot were ridiculous! This resulted in the pair of us laughing our asses off, but in the end it was Alan that won. A really good few games of pool with a pint for an added bonus and we were back across to “spoons” for another. We bumped in to a guy who used to work at another place we go to and he joined us after he had dropped a couple of new drinks to try. The name of the drinks escapes me but they were along the same sort of lines as Jaegerbombs, very nice, very dangerous because of how nice they were and a good talking subject when he joined us. We stayed chatting for a good while and had a few more to drink until Tom rocked up with the “Chucklebus” and asked if we wanted a lift. This obviously seemed like a good idea because he drove us back to my place and then Alan to his. I may have been a little `tipsy` when I arrived home at a little after 10 o’clock that night but had had such a laugh. I can honestly say that I really needed it too, I forgot about all the shite and problems for one day and just had a great laugh with a good mate, I’m sure that it would have been prescribed by the Doctor if he was able.

No headache or dodgy tummy on Friday was a good thing, Wifey was making cakes and it was my Daughter’s last day at her school in Ilminster. She has decided to move school now which I am really proud of her for as it is a big move for her. I took her new uniform back to the shop as it was the next size up that we needed which also gave me a nice lot of fresh air and got me out of the bungalow for an hour or so. It is real easy to get stuck in the bungalow in so much that you start to do something or look at something and before you know it, it is time for the kids to come home and therefore too late to get out, so if I am able I try to get out as much as I can although I have lost count of the amount of times I have missed the opportunity and ended up stuck in for a whole week or more. Anyway, I changed the items of clothing and had a roll around the town for a while and then headed back to the bungalow. In no time at all it was approaching three thirty and we had to head over to get the kids from school in Ilminster. As it was my Daughter’s last day at this school with her friends I wanted to travel over to get her as well and so in to the car we got and over we went.

On Friday night we were visited by my Wife’s Aunty and Uncle from London who had travelled down as we were all going out for a family meal at the Stonemasons on Saturday night to celebrate Pauline’s Birthday. For us to all go up to London would take at least three vehicles and so they decided to come down to us, it would also be nice for them to have a meal somewhere different and would also give them a chance to go to the coast while down. We got a text from Wifey’s Cousin too saying that she was at the train station in Yeovil and could we pick her up. No problem, but we had been told by her that she could not make it down when we had spoken to her not too long ago. A minor panic occurred on the side of Wifey while she tried to get hold of Tom to go and get her or to sort out the kids ready to go so we would all go and collect her. After only around ten minutes of her rapidly climbing to 30,000 feet while trying to sort out going to get her Cousin, there was a knock at the door and it was….. Lucy, her Cousin closely followed by…. Mark and Pauline, her Aunty and Uncle. Sneaky buggers!

Saturday had some beautiful weather, cold but with beautiful sunshine and blue skies and so we all decided to go for a `st-roll` down at the coast, we therefore headed off to Sidmouth. My Son, `Pickle` and I travelled in the “Chucklebus” with Tom as Wifey had to take my Daughter for a hair cut ready for school on Monday, so they would catch up with us later. It was quite nice to roll around the streets and look at the shops, a couple of which I would have quite liked to go in to have a look at but unfortunately there was no way that I could get in to them. This is something that you do come across more frequently than you would like and certainly more frequently than able bodied would like to believe. As a general rule so far I have found is that the shop keepers will be happy to come and help if you know exactly what you want but not many are really interested if you are not sure exactly what you want but know what you are looking for. In short, unless you know EXACTLY what you want and are DEFINITELY going to purchase it from them, then a lot of the time you are wasting their time which to be honest gets right on my tits. It is refreshing when the shop staff will bring you some choices and also are happy to engage in conversation with you whether you buy from them or not. One such seemingly helpful shop keeper owns a toy shop in Sidmouth, I sat at the door and could see the Airfix models at the rear of the shop but could not make out what one in particular was. I called to Tom and my kids who were in the shop towards the back and I asked them to see what the model was. Before they had replied, the shop keeper had given me the answer that the models were Airfix, I knew this bit of information but it was the make of model aircraft I was wanting to know. The shopkeeper did ask if I wanted him to go and get the model which was nice of him but as it turned out I already a Hawk and so I thanked the shopkeeper and with the tribe finished in the shop we headed off to look around some more. Having finished in Sidmouth we all got in to our vehicles and headed off to Seaton where we would meet up with Wifey and my Daughter.

The weather here was just as cold, (although we did see an older lady swimming who reckoned the water was around 11 degrees! NUTTER!), but the sky was beautiful. The sea can only be described as dead calm, even the little waves that rolled slowly to break on the beach seemed like they couldn’t be arsed, it resembled a saucer of water with the sun glistening off of the waters surface. Beautiful. We had a cuppa on the sea front whilst looking over to Seaton Hole which is more difficult to get to, since the coastline has been falling away due to constant erosion. It was while we were having this cuppa that I spotted a really interesting cloud which made for a lovely photo. 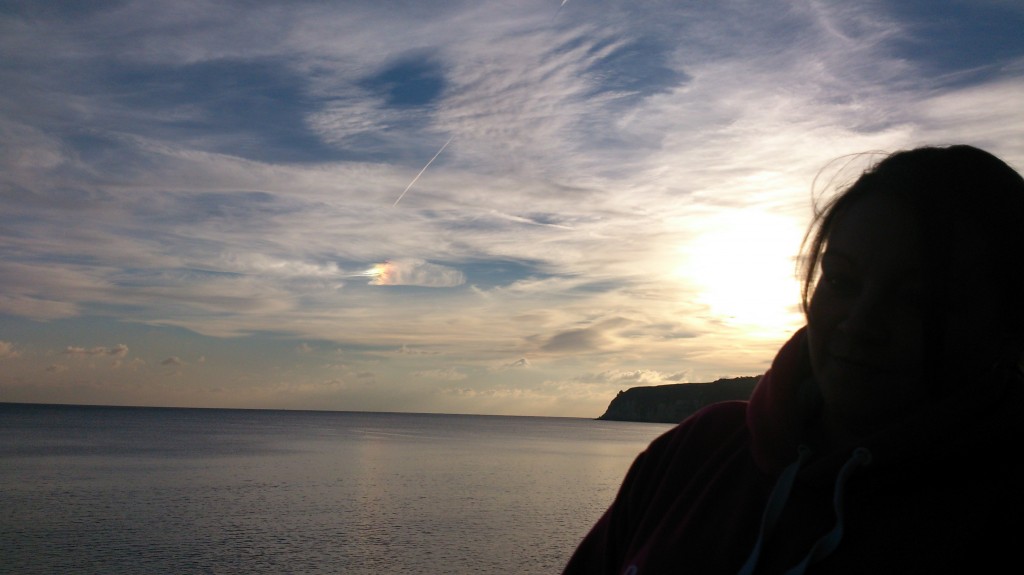 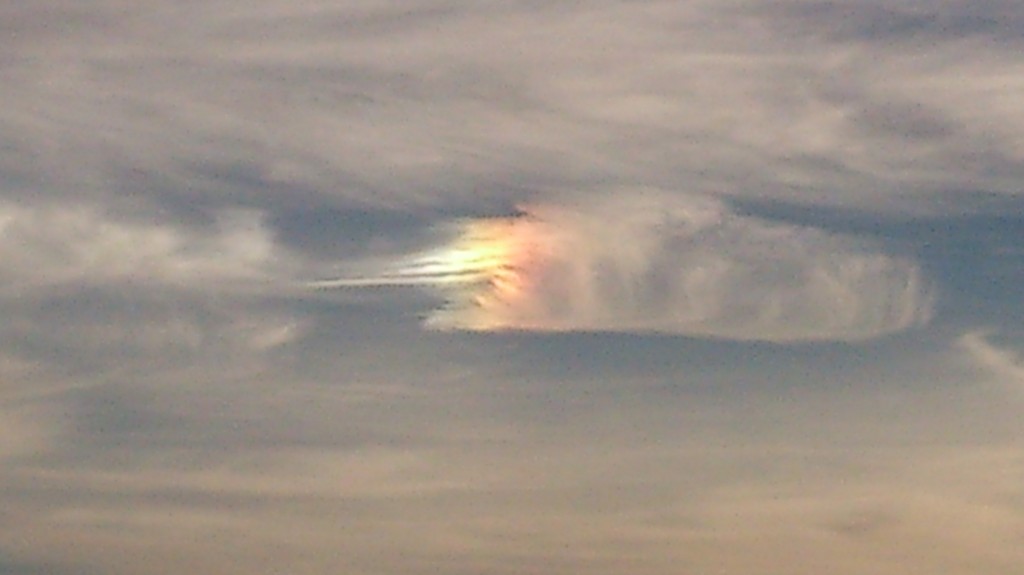 Eventually, after a good couple of hours wondering along the sea front, we went back to the cars and headed for home. This was not the end of the visit or time spent with Pauline, Mark and Lucy; this was just to give time to get the kids and ourselves squared away for our meal at the Stonemasons which we were all looking forward to. We arrived a little before the seven o’clock timing that we had all arranged to go for to see about getting a table for the fifteen of us. Weirdly, despite the fact that I am a regular customer, I was not able to reserve a table even though it was not for a table of two. Anyway, they put our names down for the next available tables until we had enough seats for all of us, and then at around half seven we all sat down to eat. The food and atmosphere was as good as it always is and low and behold, sitting at the table next to us was someone I have known for a good few years and her Mum who I had never met before. I briefly popped over to their table to be polite and say hello as it is not often I get a chance to chat. While having a bit of a natter she messaged her husband to say I was there so I could take a few minutes to say hello. Again, the opportunities to catch a chat are few and far between and so when he arrived I did catch a few words with him. It was nice that he made the effort to pop down to be fair, I hope that over the Christmas period they will find a few minutes to pop in for a drink. It’s on the internet now you two so I hope you will come round! With our plates empty and bellies full, we left the Stonemasons and made our way back to the bungalow having said goodbye to Kev, Maria and Maria’s Mum. Wifey had made a Birthday cake and so after the presents and cards had been opened, we ate the cake, drank wine and/or tea and coffee and chatted until everyone went home. It was a really good day, great to catch up with the family and to spend some time at the coast.

My Daughter starts her knew school tomorrow. To that end she has been to Taunton today with Wifey to get new stuff that she requires and this evening has been spent going through forms and paperwork for the school tomorrow. Not the most confident person in the world I know that she will be nervous but I hope that she will be ok. First days can always be a little nerve racking and she really only knows one person, but I guess we will see how it all went tomorrow afternoon. Bless her.

So that is it, not much going on, tomorrow I have some bits I need to do and I’m going to call some swimming pools. I really want to go swimming.