Saturday saw things go somewhat wrong for me if I’m honest. I had been to watch some of the junior wheelchair basketball at the Guttman stadium here at Stoke Mandeville Hospital grounds which was very impressive and showed sportsmanship and proffesionalism that the so called celebrity sports people could learn a huge lesson from and then I made my way back to the ward. I felt a little tired and so at 15.00 I raised my bed up and lay my head on it. It was 19.00 before I woke agin properly and this was when the nurses convinced me to have my obs done and for me to get a urine sample. My blood pressure (BP) was low and my temperature (temp) was high, late 39 degrees. I went off to the toilet to get a urine sample but fell asleep before I returned with it causing a nurse to come and find me. It was around about this time that I realised there was clearly a problem, what better place to get ill though right? They called for a Doctor and she made the decision that I needed to have blood taken and a Canular fitted, blood I could understand but a Canular? That didn’t sound good. 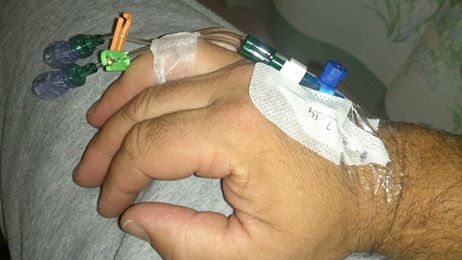 Not ideal as I had to get in to my bed and I need to make a fist to carry out the transfer, shouldn’t be a problem though… 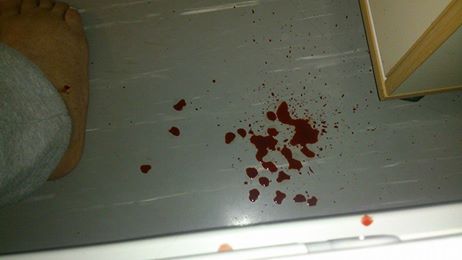 So the transfer went well but the Canular didn’t, I had unfortunately pulled it from my hand resulting in me leaking a bit, on the floor, my bed and my clean tracksuit bottoms. “Doctor…..I think I may have undone your work of putting the Canular in, sorry about that, you may need to come have a look.” And so she did come and look, and agreed that I had made a bit of a balls up of things (not her words). She decided however to leave it out. I got in to bed and watched a little TV. Shortly afterward the night Doctor came on and asked if he could also put a Canular in and take some blood. Why the hell not. He decided that the Canular would be better placed further up my arm. 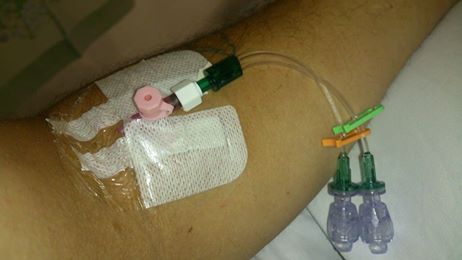 With this in and a nurse over to check my obs again, the Doctor mentioned an ECG, what the hell, an ECG, that’s for the heart, I only wanted to practice transfers what the hell is going on? I was given antibiotics and fluids via the Canular through the night and would see how I was in the morning. Morning arrived and more obs. Have to stay in bed and have more of the same, this is not how my time here is supposed to be panning out. Later in the morning I was assisted in a bed bath and then I got in to my chair while they changed the bedding which was wet due to the amount I had been sweating. I stayed in the chair for the day, predominantly by my bed until the evening when I had to go back to bed to have more obs, blood, antibiotocs and fluids….and an ECG. My heart rate was of concern which warranted the ECG but I was reliably informed that I was unlikely to die immediately or indeed overnight which was encouraging for me and would eliminate any need for complicated paperwork for the staff so a win win really!

Overnight fluids were put in via the Canular and this morning my obs were satisfactory to be able get up and go to my physio appointment at 10.00, this was good news as I need to make the most of the time here, to be put on bed rest would be a disaster as this is the second of the two weeks and I still have transfers to accomplish and perfect. I went to the gym and met with Katie, I explained about the whole Canular in the arm thing and while Katie got the mats for my transferring session I got on to the bench. With the mats in place I asked Katie if we could not use the bench any more and concentrate on me getting in to my wheelchair. The sweat that was running off of my forehead and from my head down my neck back and chest was ridiculous, to the point that Katie had to get a towel, no sooner had I dried myself that I had to do it again, this was stupid but I had to keep going and make the most of the transfer time. I achieved several good transfers and we lowered the step again but after only a couple more I was simply unable to do anymore. I was soaked, the towel was well used and I was too tired to do anymore, my day of lifting was over.

I attended my fitness class at 13.00, I had drunk loads and was ready to work hard, not 100% as I was still not feeling great but I would put as much effort in as I could. In the absence of Kirsty the job today fell on Liv, she was very enthusiastic and clearly enjoyed seeing us all working (I think she may have been working with Kirsty a bit too much!). I was definitley still not right though as the sweat that was running off of me again was beyond belief but I cracked on, I just reduced the level of effort slightly although this made little to no difference to the sweating. With the fitness finished and me back in the ward I had a shower to freshen up, as I had the Canular fitted though I was not allowed to get it wet so the staff kindly protected it for me. Now I have been called some things in my time on this Earth, some of which is unsuitable to publish on here but I have never been labelled as a Biohazzard! 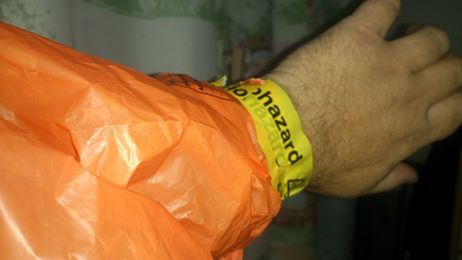 Normally I would get dried and dressed in the shower room but I went to my bed as the sweat was again pouring out of me to the point it looked like I hadn’t dried myself. I got back to my bed where I dried and got some fresh clothes on. After tea I had a visit from my Sister Andrea for a couple of hours which was nice and a surprise visit from young Issy who was here on my last visit. So tomorrow I will be having lunch with Issy and another visit from Andrea at tea time, whish I am really looking forward to. Tonight though, it is more antibiotics and fuids via the Canular. So this shows how luck can go, I was paralysed due to an accident which happened at a holiday destination and I get an infection whilst staying at a hospital, still, it could be worse I guess!