I appologise for having not written about my gliding course daily or even an entry on the last day of the course but things have been tiring and have actually taken a lot out of me, something which I have not been used to. The learning curve on the gliding course was steep, as steep as the climb rate of the glider on launch if not more and there was an added element for us to cope with, a cross wind. The weather was not too unkind to us throughout the course, some showers and cloud which made finding thermals difficult even for the instructors but the wind was such that we had some amazing challenges learning to launch and land in a cross wind, a cross wind that you really knew about, from launch to land. This gave us some training that made us work hard, but also it gave us the knowledge of how to deal with cross winds should they arise later in our flying careers. Because of the cross winds, none of us on the course were able to fly solo although we were told we were so close, the reason we could not fly solo was because none of us had been flying complete and proper circuits due to the winds and as we had not had enough practice of it, the decision was made for us not to fly solo. We were all given a 12 month membership of the club and so we can make the most of the flying on offer, or not we don’t wish to follow it up.

I met some really good people on the course, at least three of which I know I will be staying in touch with and hopefully meeting up to do some flying with. One of the guys I would have loved to have met up with for gliding lives way up country which is a shame, we had a really great night playing cards on the Thursday. One of the guys sent me a friend request on a social networking site which I obvioulsy accepted, another guy gave me his e mail address which I will use to send him my details in the next couple of days and another guy has my details and I hope to hear from him soon also. The three of us are not too far from the gliding club and so we should be able to arrange a day that is suitable for all of us to meet and do some gliding which will give us a chance for a catch up also. So to close off the gliding side of things, here is a video taken from the wing of the glider I learnt in which captures my launch, circuit and landing, and Yes I am flying it.

On Sunday my Dad travelled up from near Bournemouth to my bungalow, he arrived at around 07.15 and the reason for the early arrival was because he was going to drive the “Chucklebus” to the Royal International Air Tattoo at R.A.F Fairford. My Son was going to enjoy the day with us which was great, a day out with Dad and Grandad and for me, a day out at an airshow again with my Dad, just like the days when I was a kid. The rain really came down on the way to the airshow but the word from Fairford was that it was overcast and improving. When we arrived it was indeed overcast but the cloud base still allowed the display aircraft to perform allowing the pilots to show what their aircraft was capable of, and with several diferent nations having the same aircraft there was always going to be a little competitive nature between the pilots which meant the crowds got to see the aircraft really being thrown around.

The main reason for my visit to Fairford was to watch the 2014 scholars of the Flying Scholarships for Disabled People recieve their certificates, people who had gone through the same process as me on the interviews and the like but who had been sucessful in obtaining a scholarship which is to help people to get back their self confidence or self worth from what I understand. It was interesting to hear the sholars being introduced and the reasons that they had given for wanting the scholarship. I did not get a scholarship as I had been told that I had enough self confidence to share around which I was very proud of but on balance I was given the opportunity to learn to fly a microlight with the Flying for Feedom programme and as soon as I get the hospital stay and three peaks completed I will be starting the flying with the microlights, and I am really excited about it. Here are a few pictures from the presentation ceremony.

Here, (below), is an ex scholar giving a speech on how it has helped him. 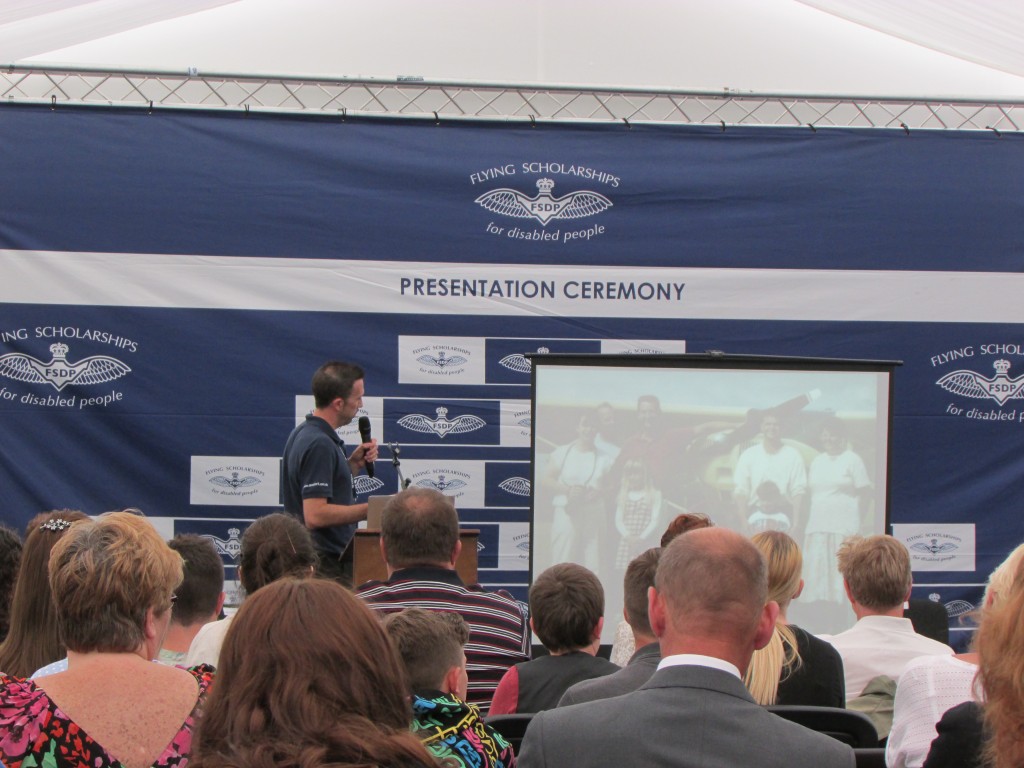 Here is a patron, Bruce Dickinson, giving a talk on his involvement in the charity. 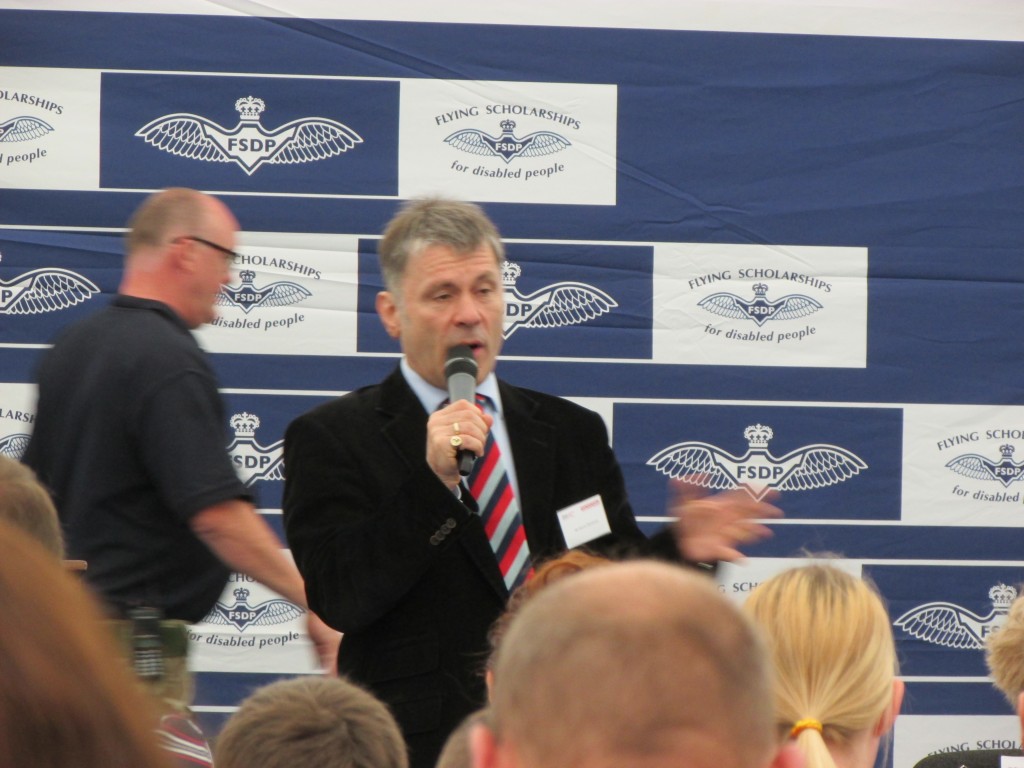 Below is Sherill, one of the people who I met on the schaolarship interview process, she was awarded a scholarship and was collecting her certificate. 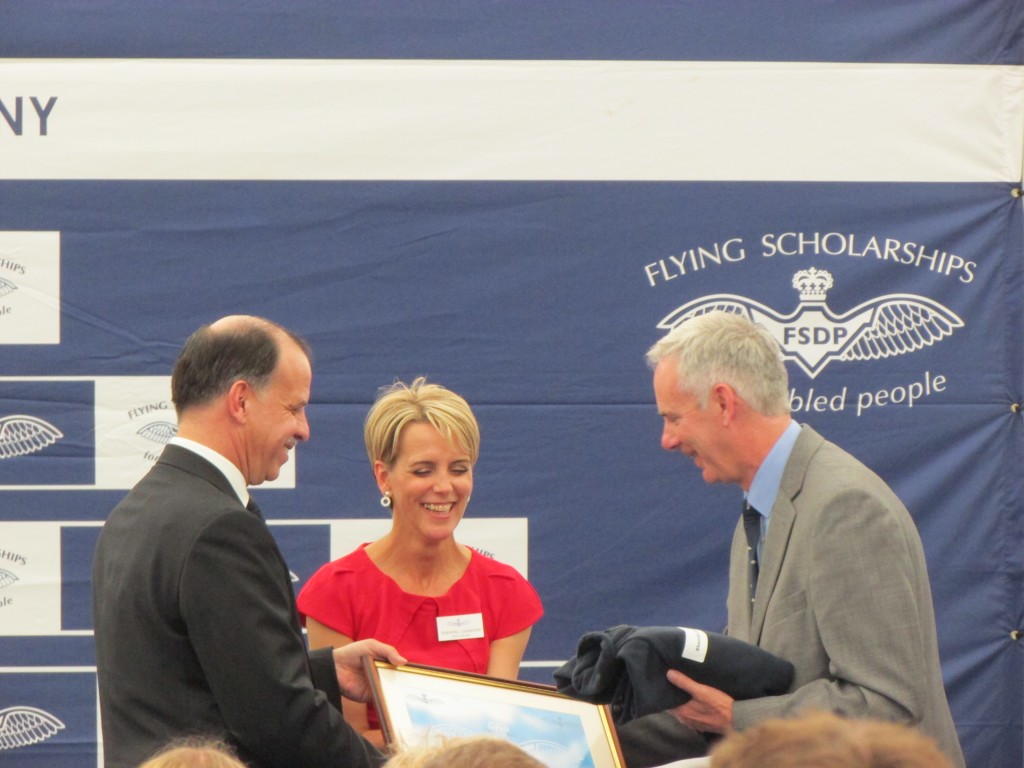 And here is another of the scholars who I got on well with, Carolyne who was also fortunate enough to be awarded a scholarship. Sherill and Carolyne are undergoing their flight training together at the same airfield. 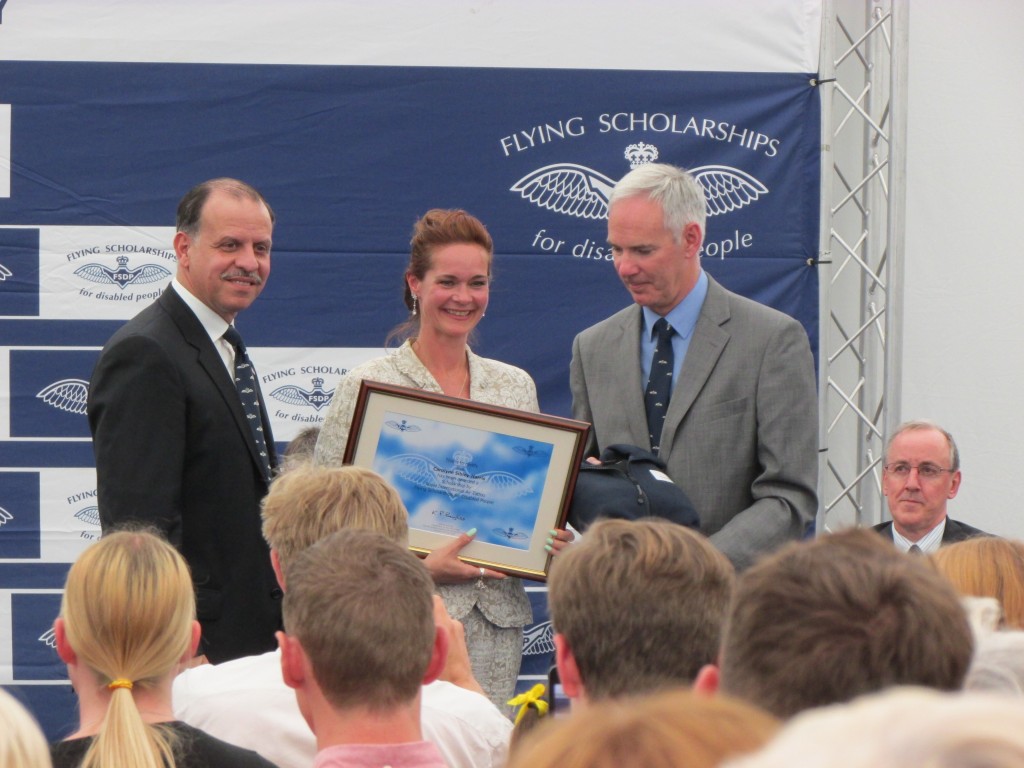 There was a special award for two ex scholars who are now mentors and fundraisers (pictured below). Pauline, in the uniform, drops everything and travells to wherever she is asked to go to to support the scholarships. She had bought her cadets down from Scotland for the ceremony and the cadets acted as a works party. They did themselves and Pauline proud. The other ex scholar was Sean who has raised in excess of £20,000 for the charity by pushing himself in his wheelchair along various runways, (including Heathrow which was closed at the time), and has been accompanied by members of the Red Arrows who have pushed with him. 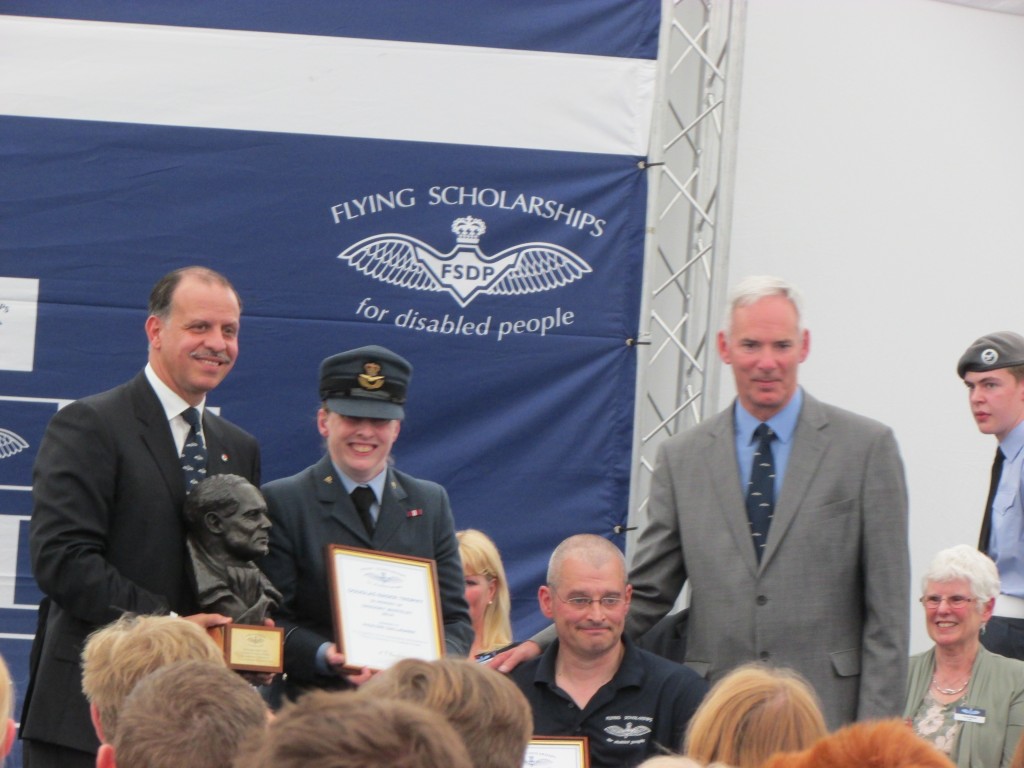 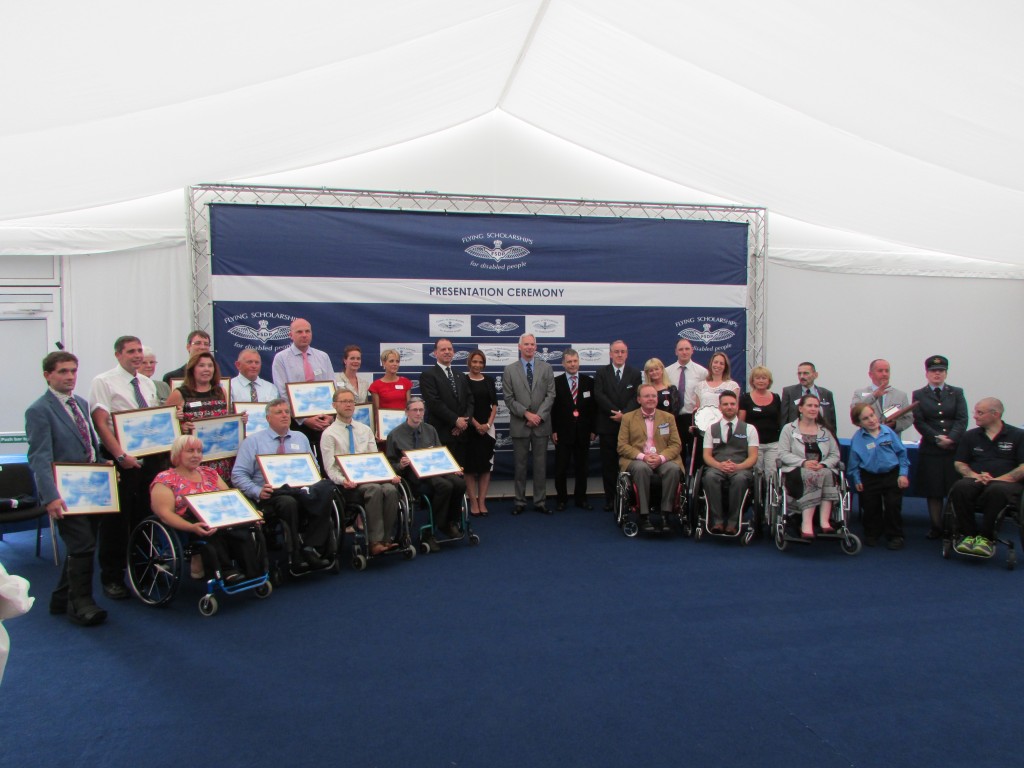 Outside of the ceremony, in which my Son grabbed forty winks bless him, we looked around the static aircraft. 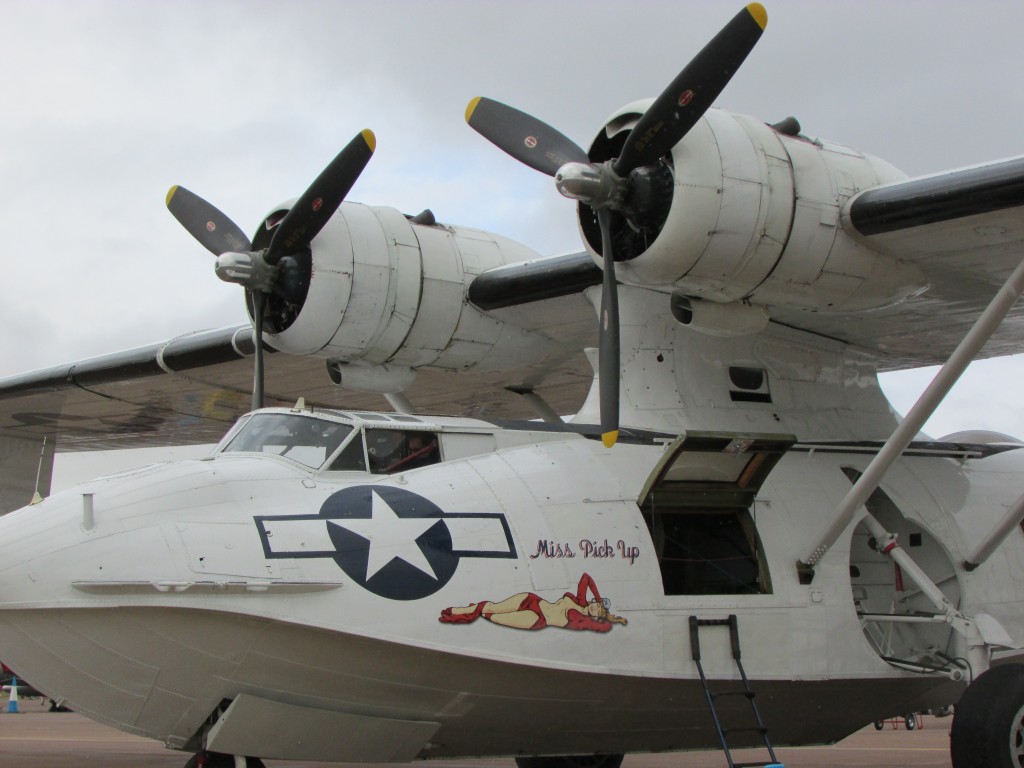 The Gazelle formation team were collecting for BLESMA, having spotted my BLESMA badge on my jacket, one of the pilots invited my Son to sit in the Gazelle while the pilot talked about the aircraft. 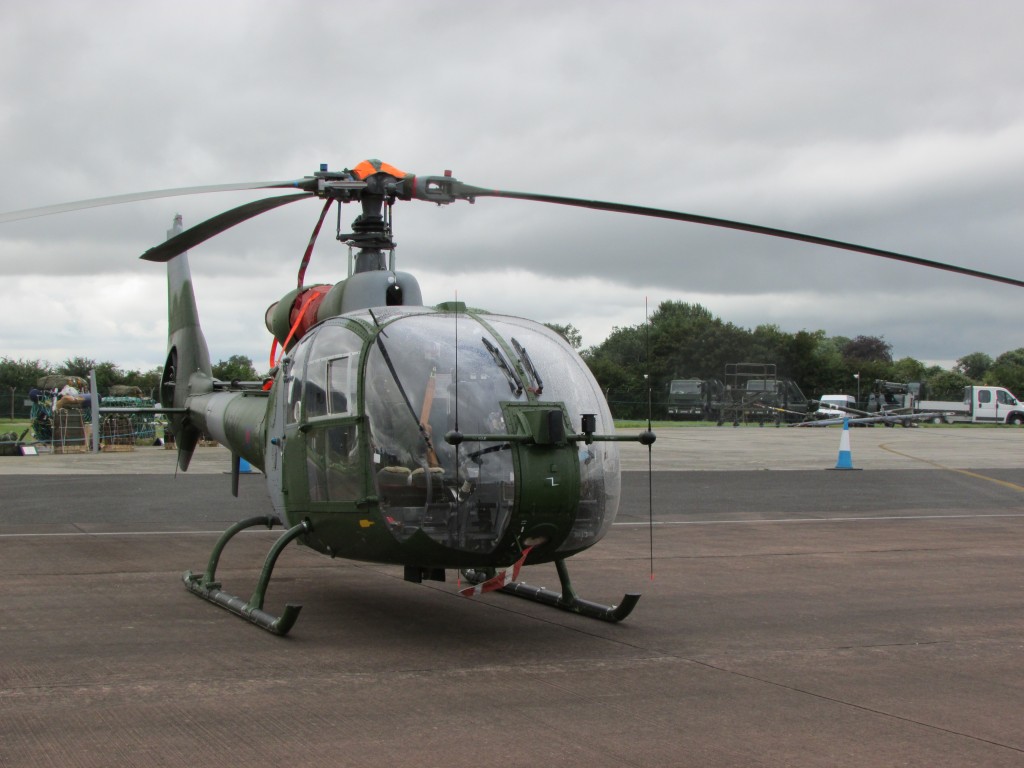 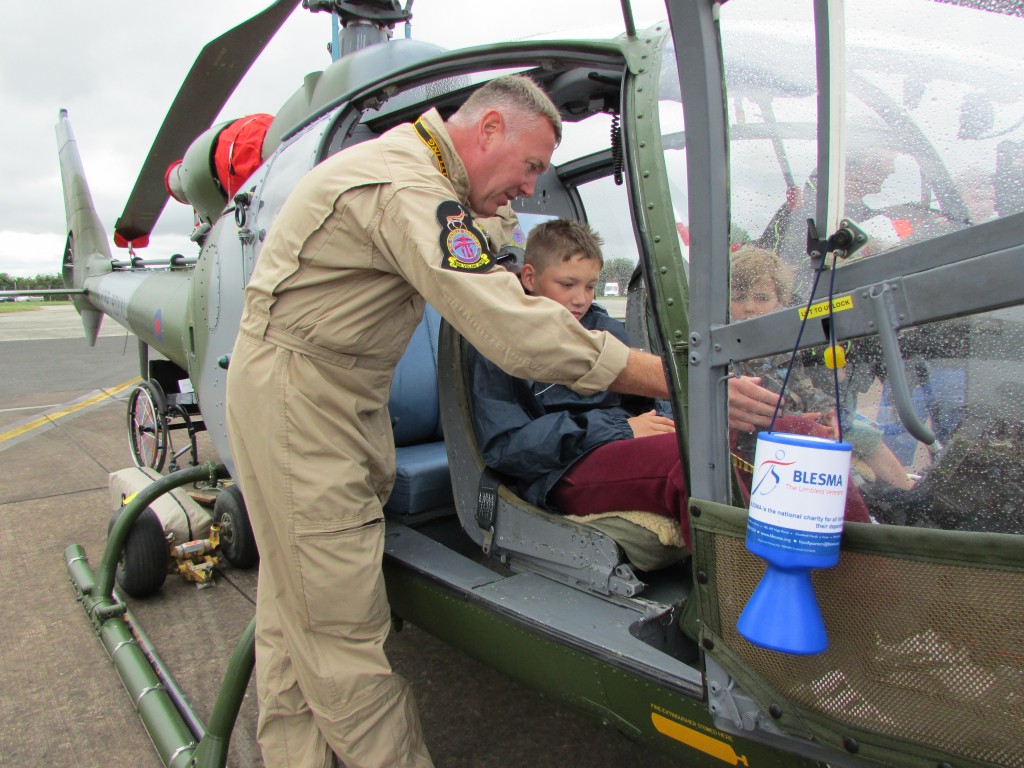 The Vought A-7 Corsair, note the writing on the side, everyone needs a motto I guess. 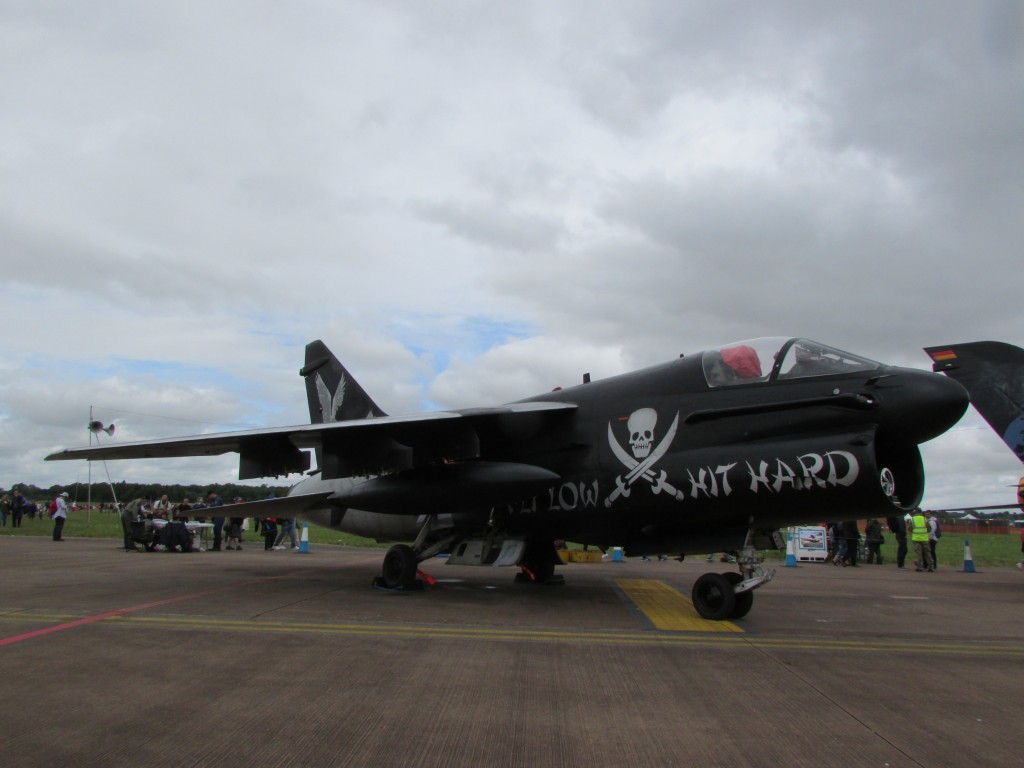 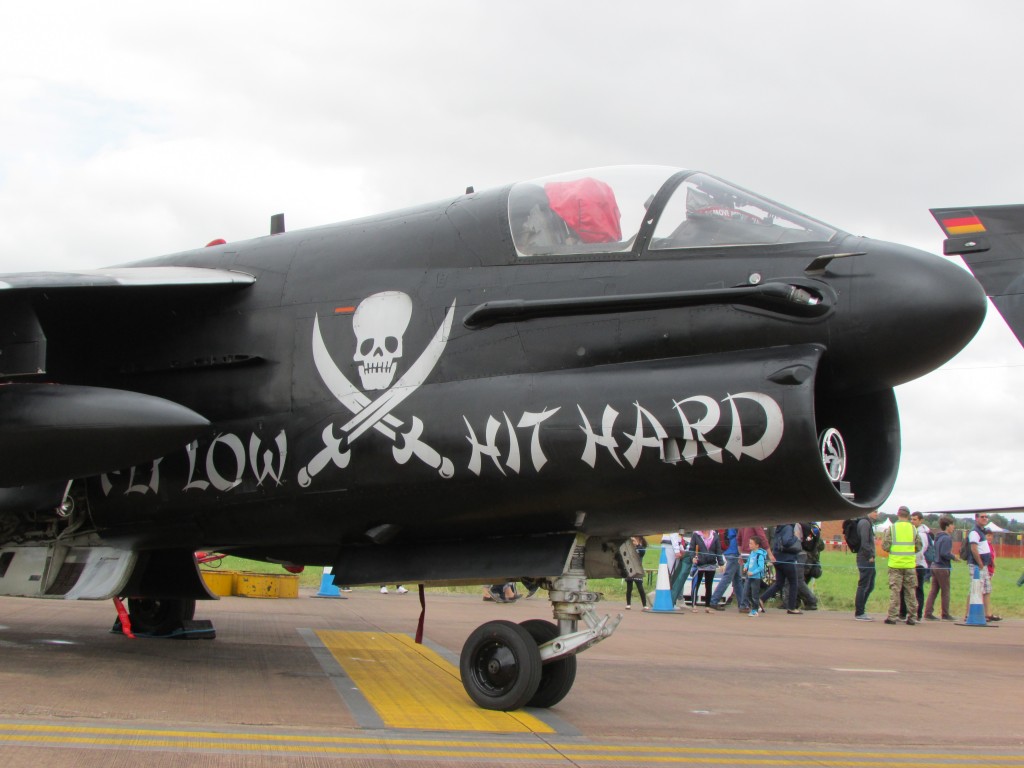 John from Flying for Freedom took me over to the Hurricane that was on static display. He obviously knew the pilot or crew that was with the aircraft and so under the wire we went and he took a picture for me. 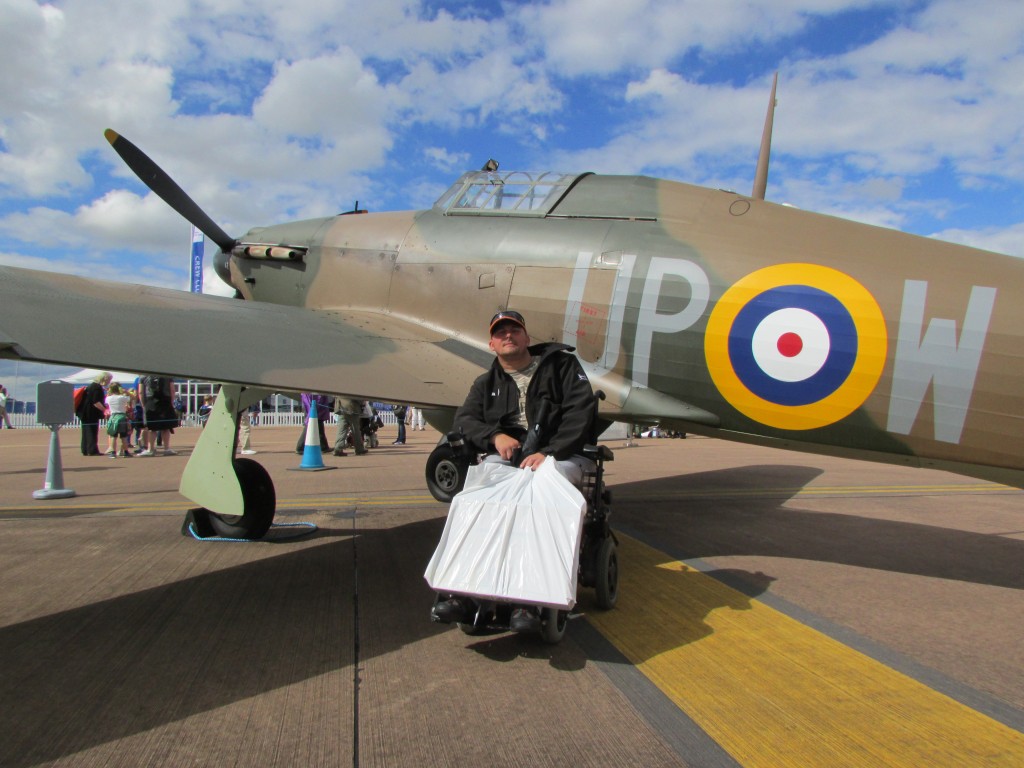 The Canberra that is based out of Kemble where my microlight training will be taking place. Great to see it, Dad worked on these for years. 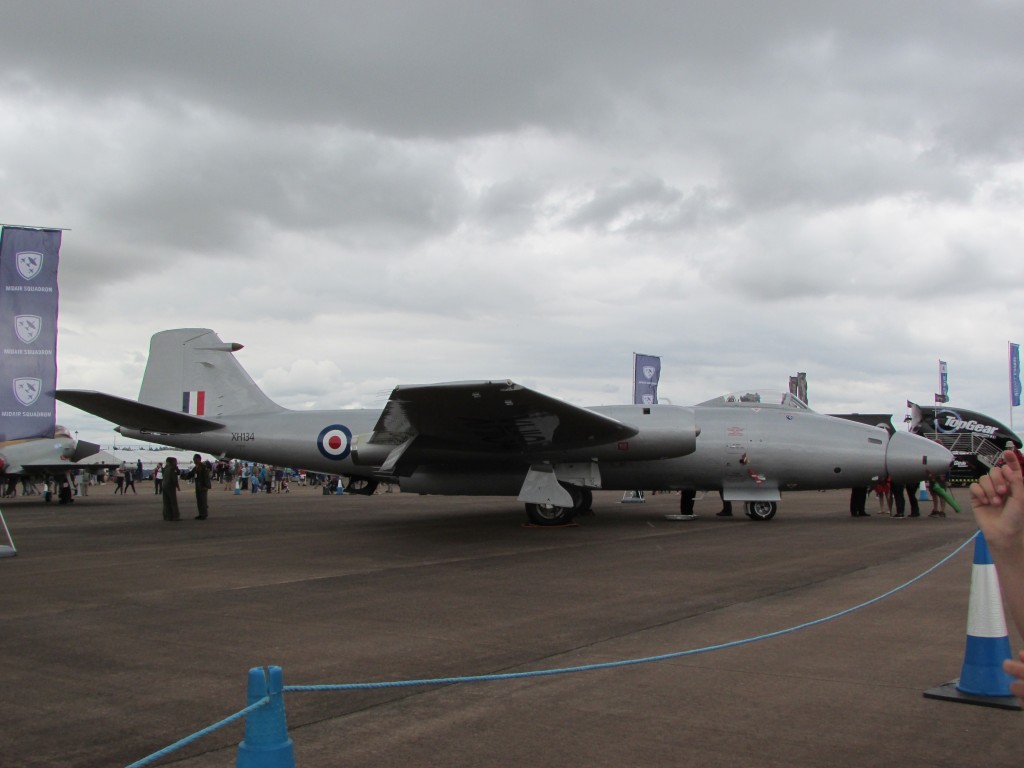 And the Hawker Hunter, again my Dad worked on these for years and I grew up around them as a kid. Dad was pretty sure it was one of the Hunter aircraft that was owned by FRADU and therefore one of those which he used to work on and look after. This aeroplane for me, possibly because I grew up with it, will always be the prettiest aeroplane that the UK has ever owned and operated. 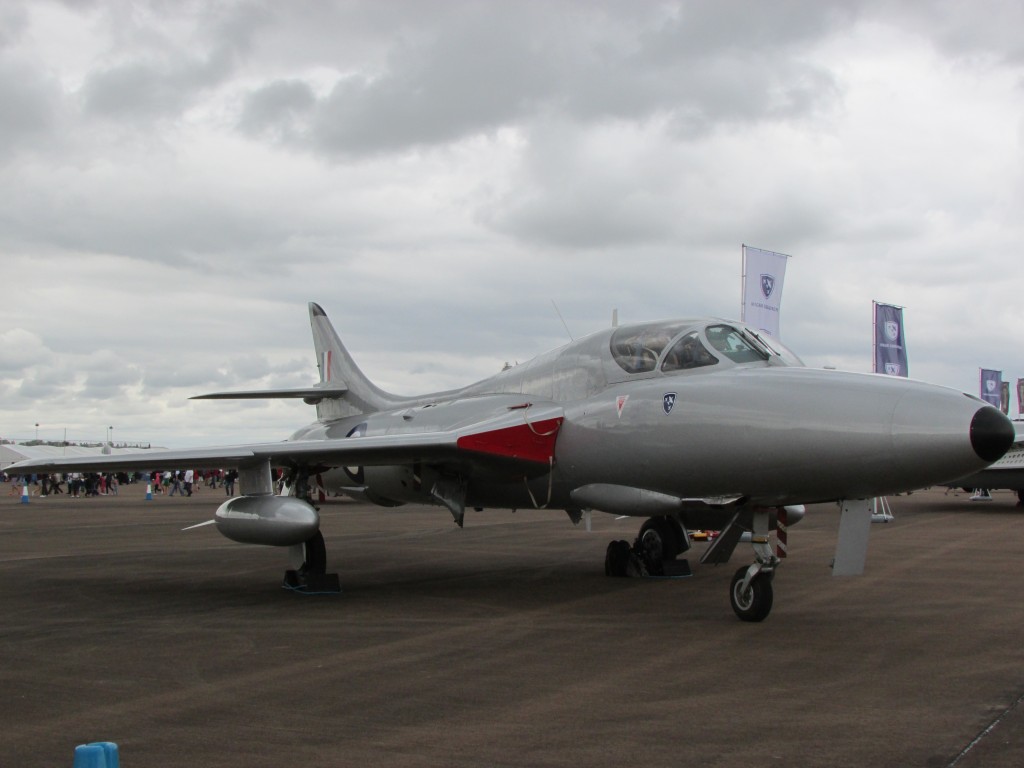 Flying displays came from many types of aircraft from many different countries. Below is a picture of an SU-22, an aircraft I had not seen fly before. 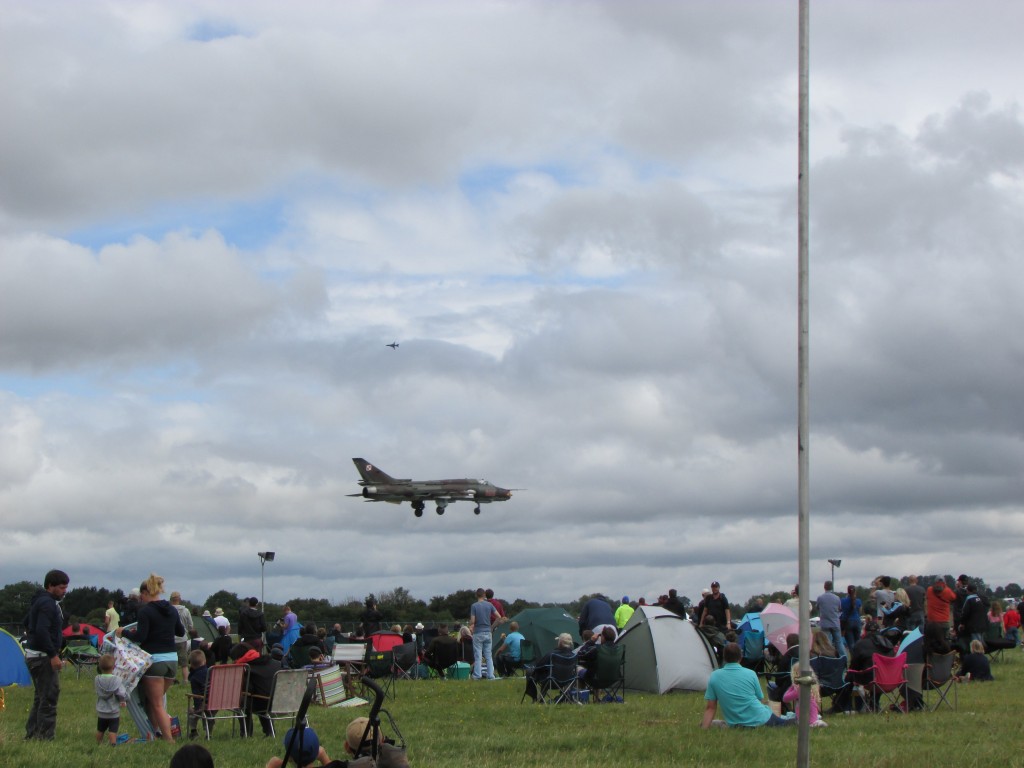 Below are a team I had never seen before, a Swiss aerobatic team made up of volunteer pilots. Their close formation flying was very precise and this was the first time that I could remember seeing the F-5 Tiger fly. It really bought home to me the size of another of my favourite aircraft which is now retired, the Grumman F-14 Tomcat. The main wingspan on the F-5 (pictured below) is smaller than the tail wings of the F-14 which means the F-14 was HUGE! 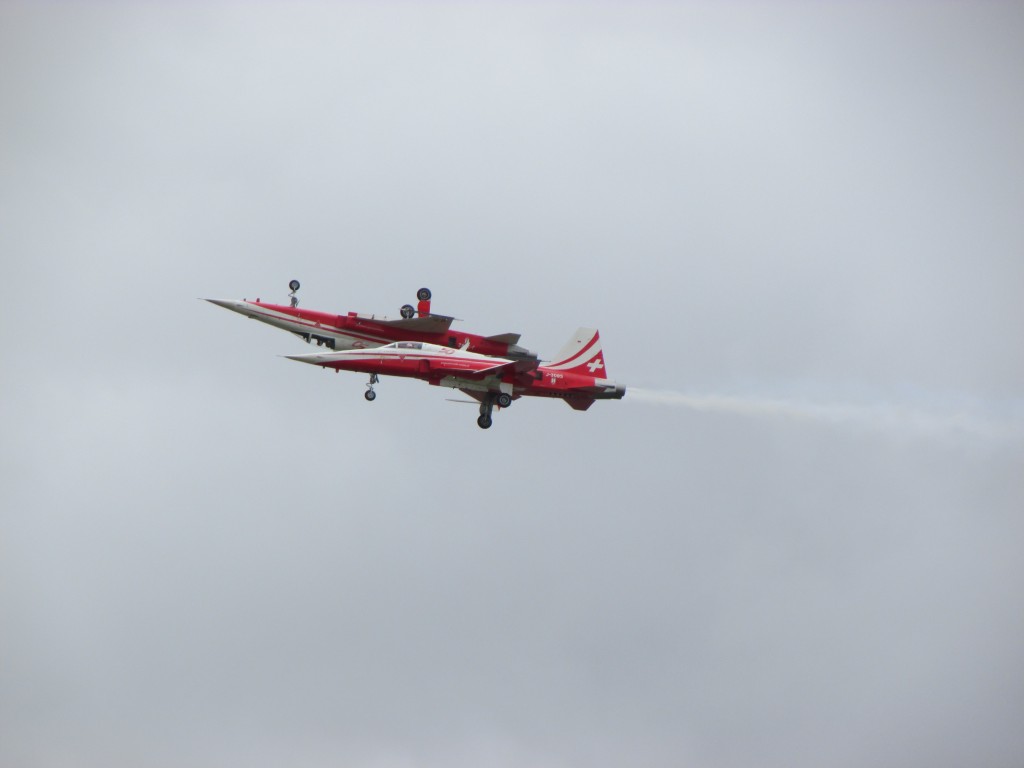 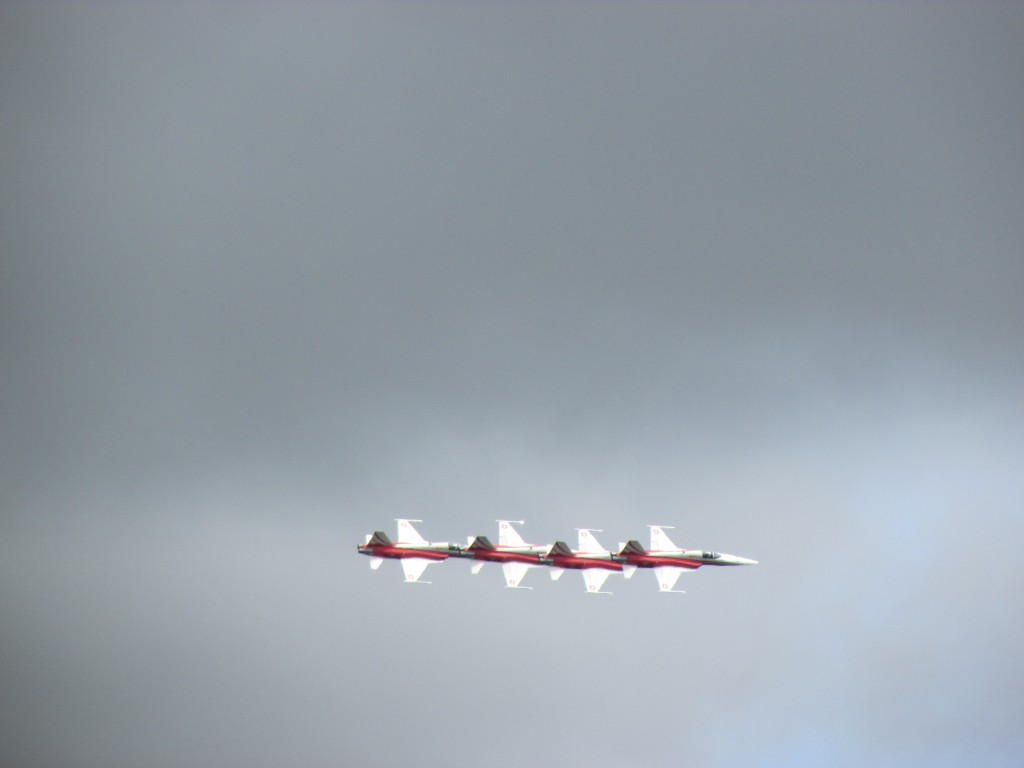 Below is just one of the F-16 aircraft that was thrown around the sky. Who would have thought that the F-16 is celebrating it’s 40th Birthday! 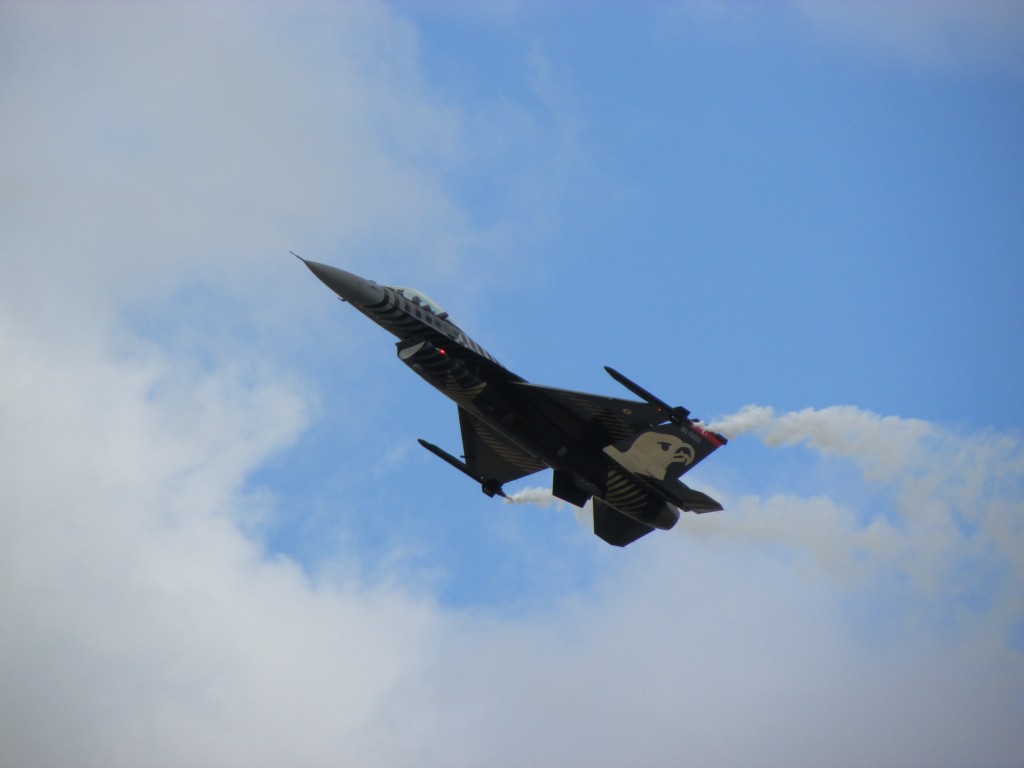 The Royal Navy chucked their Merlin around. 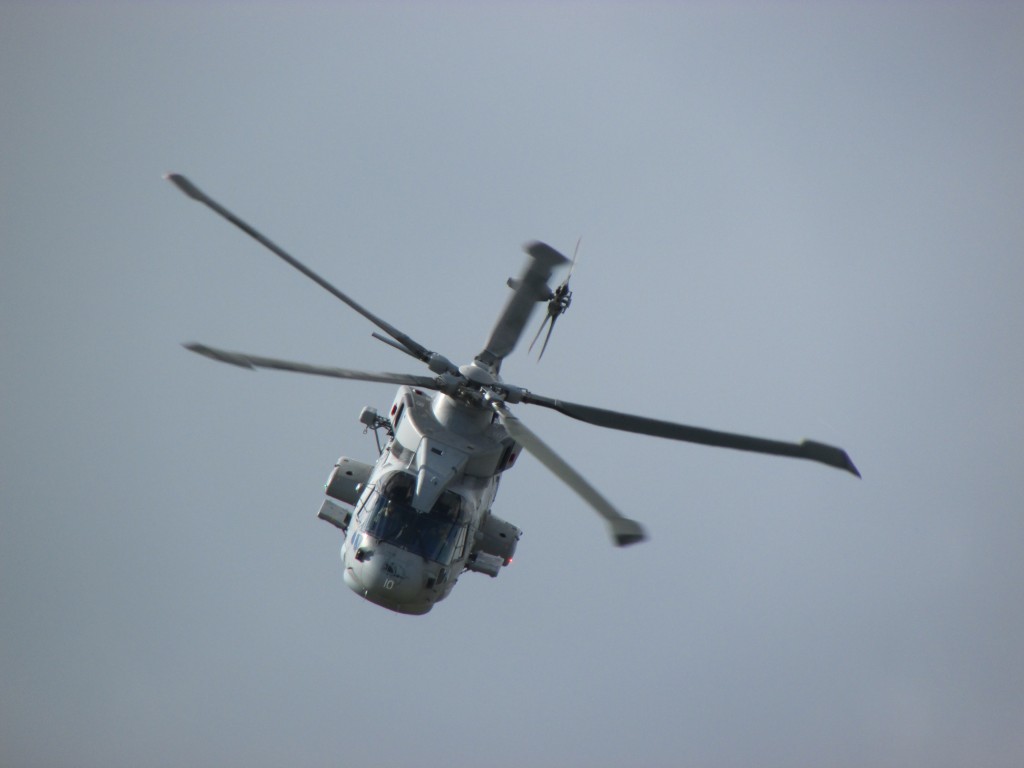 And of course no airshow could go on without the Battle of Britain Memorial Flight displaying some aeroplanes. Below is the Dakota or Skytrain. Note the D-Day markings. 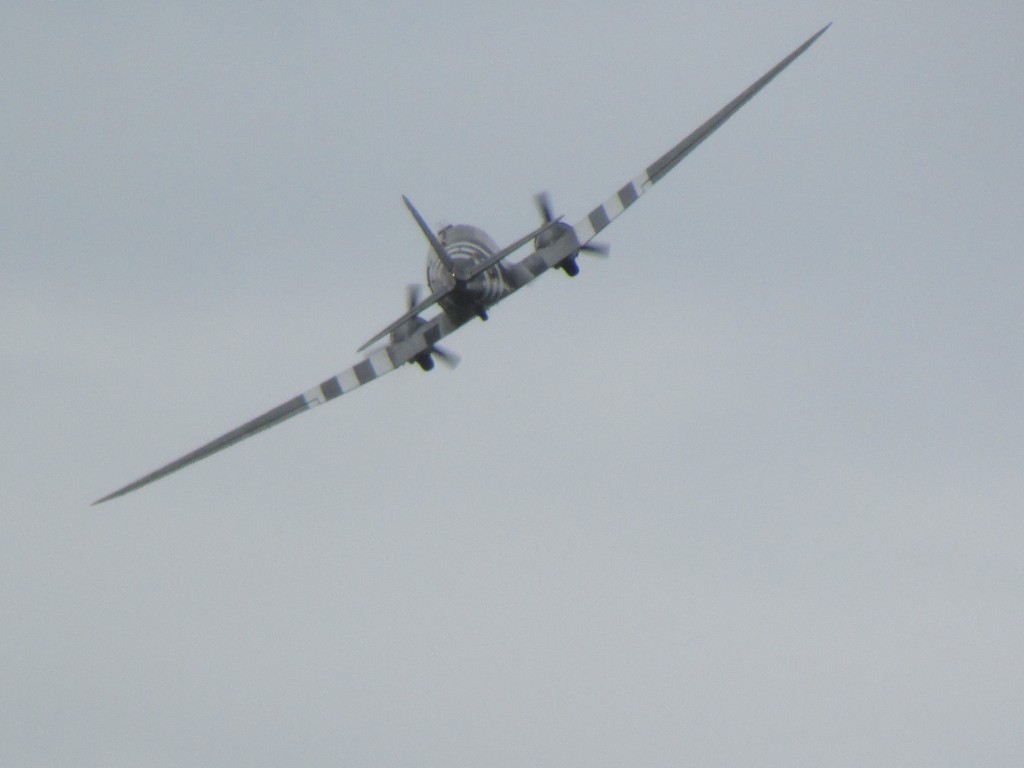 She was not the only BBMF aircraft flying. 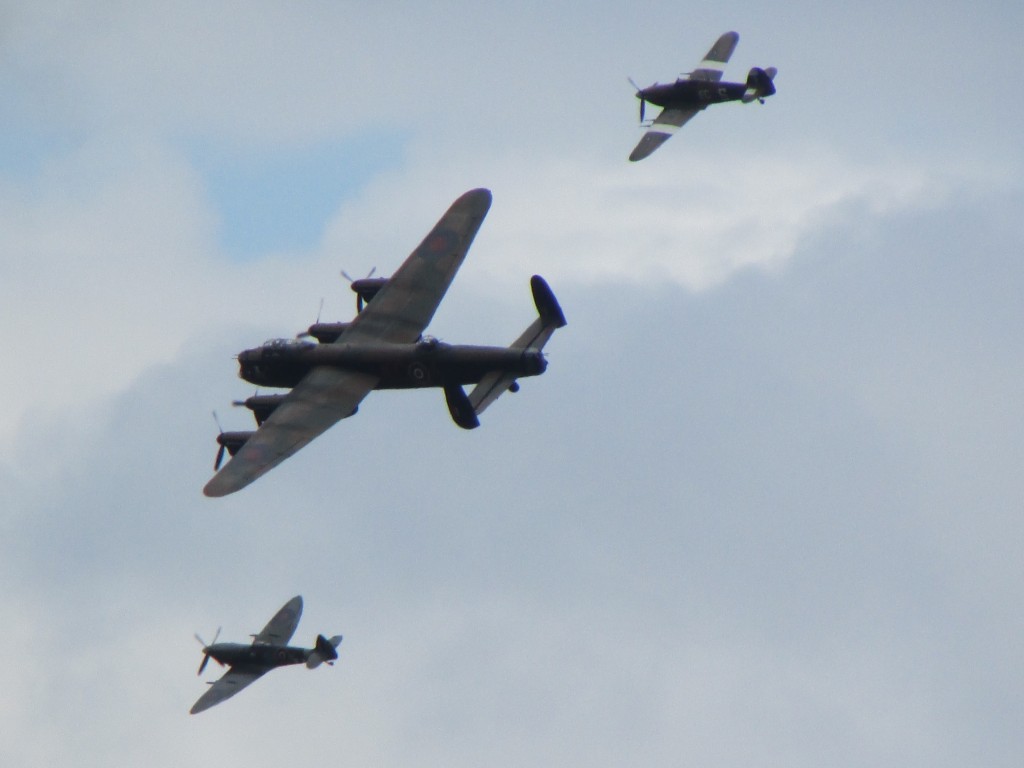 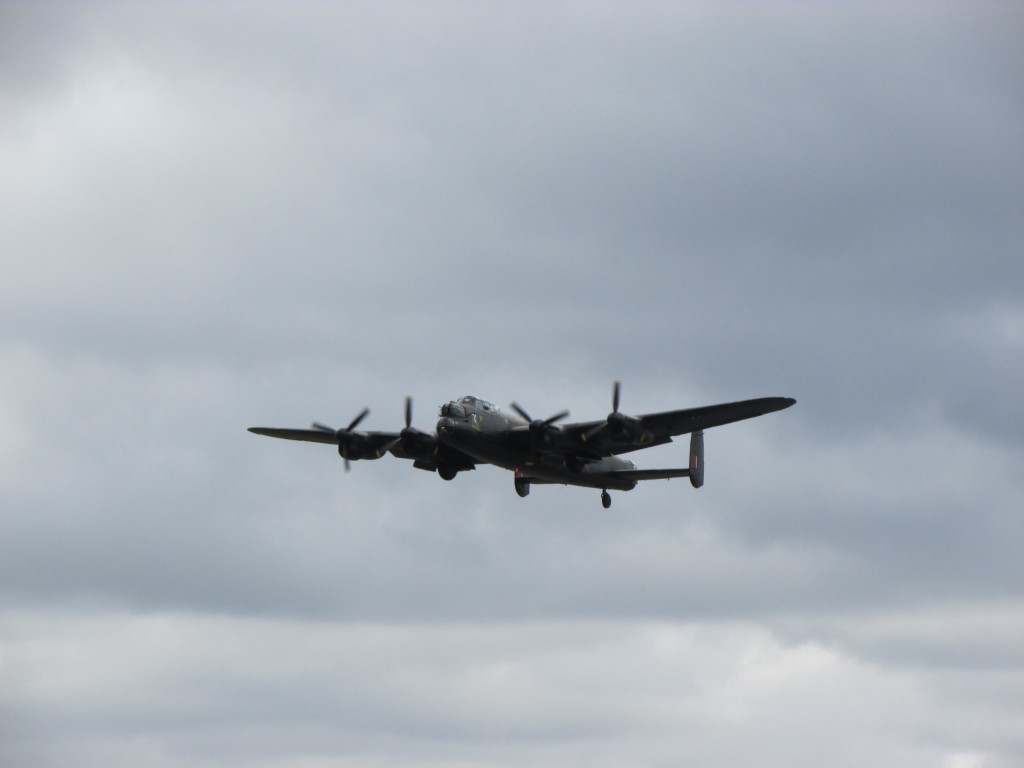 And to celebrate the 70th anniversary of D-Day, the spitfire is accompanied by the Typhoon for a flypast, both showing respect to those who gave their lives by displaying the D-Day markings. 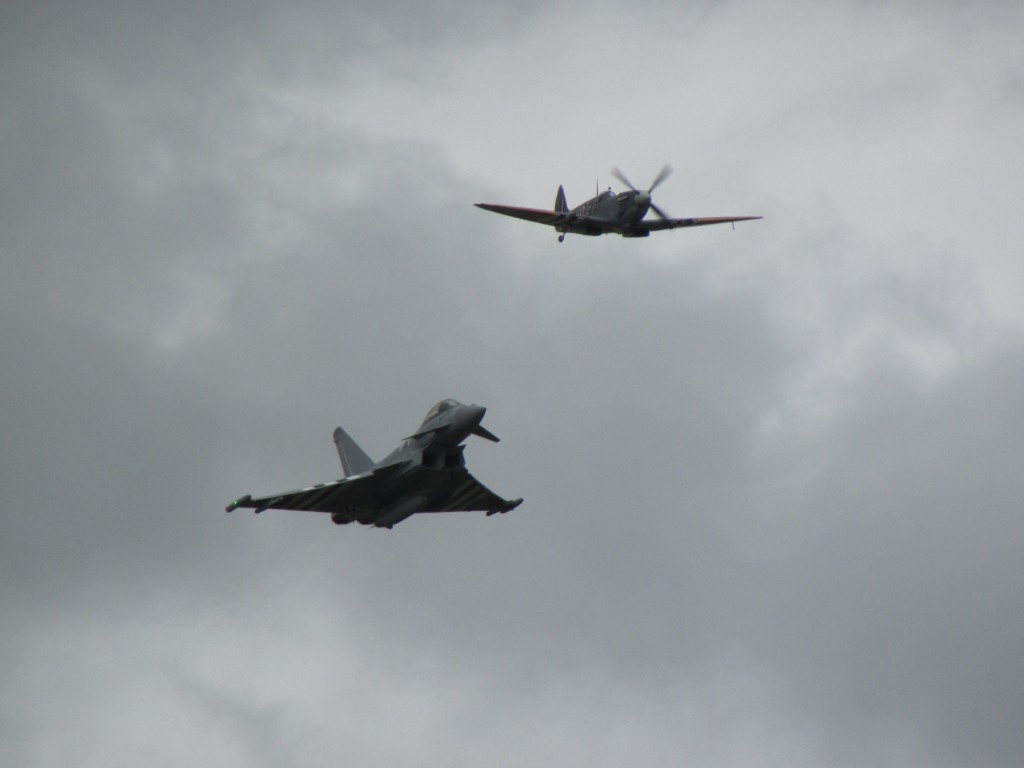 The RAF showed what they can do with the Chinook, the RAF heavy lift helicopter.

It was an early start, and a late finish but we had a great day, it was excellent to spend the day not only with my Son but my Dad also.

I want to tell you now about Flying for Freedom.

“Flying for Freedom, in partnership with Help for Heroes, are mounting an expedition to the South Pole. 14 days flying at below -40 degrees C. Your donation will help us pull off the expedition and establish five flying schools around the UK offering free microlight flying. Disability flying provided by our disabled flying instructors. Together we can change perceptions of what can be achieved, Flying for Freedom.”

Now you will undoubtedly have seen a few months ago the “Neck nominataions”. People were quick enough to pour a cocktail of drinks and drink them as fast as they could but Flying for Freedom have a different take and have started something different. They are asking for people to take a picture of one of their legs and text “WINGS” to 70900 which will donate £3 to Flying for Freedom (you will be charged £3 plus your standard network rate) and the full £3 will go to Flying for Freedom. You can then nominate three of your friends to take a picture of one of their legs and donate £3 and nominate three of their friends. This is a great cause and I hope that you will get behind it, no drinking risking life or injury, just getting your legs out to help those who may not have any!