So I finally have my laptop back after yet another hard drive crashed. Thankfully though I had managed to download everything on to a purchased external hard drive, this did take four days to complete which will show how knackered my hard drive was and at times I did wonder if there was any hope that the operation would complete but this time I was in luck. I took the laptop in to my local PC World and told them that the hard drive was dead and that it would not even boot up but that I had no operating software on disk and as such would like for them to fit a new hard drive for me and replace the software. I paid the initial fee to transport the laptop to the external repair centre and simply awaited a call to collect. After a few days I did indeed recieve a call from the centre…to inform me that my hard drive was knackered…NO SHIT SHERLOCK! Anyway, a short while later I was told I could collect my laptop from the Taunton store, and so I did.

A few things have happened since Christmas as you would expect. The Overlander goes out every Sunday when we venture in to the woods where I am slowly getting to know what it will and won’t do and I hope to get some decent footage of some of the trips out so you can see. I have filmed some of it with a camera on a head mount but it really doesn’t represent just how steep the slopes are that I am going up. One of the trails I have done in particular had seen the Overlander progressing up the hill with me pulling myself over to the left as the front left wheel is waist height off of the ground but the other three wheels are still powering me up the steep slope. I really hope to be able to get footage from both a camera mounted on the Overlander and from someone on the ground in the hope that it will show some of the terrain the Overlander takes in it’s stride. Last Sunday I did something I hadn’t done for over four years, and it was thanks to my Overlander. I spent the morning on the beach, but not just on the beach, I “played” in the sea! 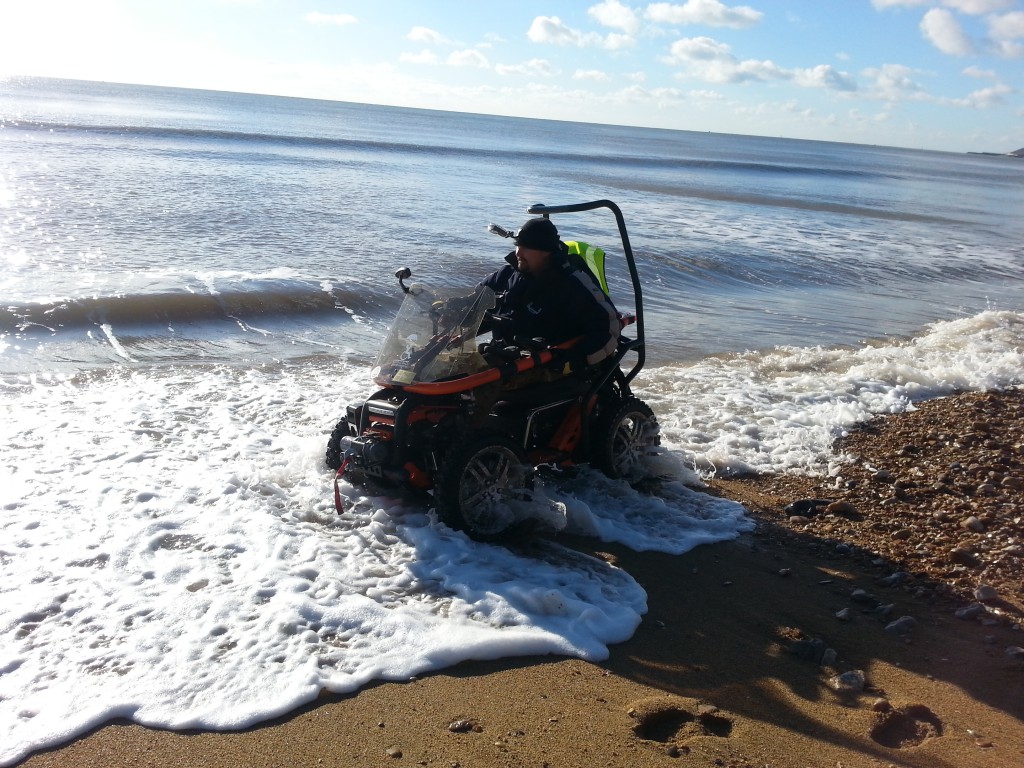 A  little over a week or so ago I asked if a friend would mind accompanying me to look at a car with me. Mainly because I would not be able to drive it and so I wanted him to. He agreed and we spent almost two and a half hours looking over it, seeing if I could get in and out of it, if I could get my wheelchair accross me to put it in to the passenger seat and to see how much space there was in the boot. We went out for a test drive with the salesman and then my friend drove it back to their premises. I am hoping that I will be able to buy the car which will essentially be my present to myself for the crap I have been through since July of 2011. Watch this space.

My Wife and kids have moved back in to the bungalow, this happened a couple of weeks ago and my Wife is now trying to find homes for all of the things that they brought with them. I’m not going to lie, I’ve seen bombed out buildings that are tidyer but slowly it is getting sorted out. No idea how things will turn out but we shall see. The kids are in the bungalow which is nice but also is noisy, the arguments are also something that you hear which is part and parcel of them being back and of course the toys being raced up and down the hallway. It will take some getting used to again I guess as I have been used to being able to go anywhere in the bungalow without problems and that is very much a thing of the past now, at least for the moment, As a concequence of them moving back we have had to get rid of various bits and bobs. Televisions that are now not required, bits of furniture and household appliances and so we have advertised them for a small fee, on the free selling pages. After a while I reduced the fees down to even five pounds for a sofa and yet no takers so eventually I offer it free to a good home. How ironic then that as soon as something is free, people suddenly need it. Five pounds is too much, no way they are going to pay five pounds for something but free, Hell why not! U N B E L I V A B L E !  It does show me about people though because the people that come to get the stuff are the people who have seen the notification on the selling pages in the first place when the items were for actual money.

My video camera is now fitted in my car. I had to drive to Taunton yesterday (Friday) and the driving that it filmed was unreal, (not mine). One of the things that I simply found astounding was at a junction just inside Taunton. I needed to turn in to the junction from the main road. There was traffic passing me on the left as I had obviously moved in to the central turning lane and traffic was coming down the hill towards us. There was a car to my right in the junction I was wanting to go in to, who wanted to turn to their left and one who wanted to cut across in front of me to turn to her right. For this reason I had held back so as to let her go. One thing (of many to do with road users) that really pisses me off is why a car turning right (as I was) cannot let the car at the junction also waiting to turn right, pull out before they turn in to the junction. Let’s be honest, the car will not be infront of the turning vehicle so what the hell does it matter? Anyway. A gap occurred in the oncoming traffic and so the vehicle with the young lady in began to pull across the road. Here she waited for around ten seconds for a vehicle to let her out (which one did) but in tose ten seconds a 4X4 driver pulled right up to the side of her car and held his hand on the horn. This could have forced her to take a real chance and go which may have caused an accident but thankfully she did wait. Two things here. First off, had he reduced his speed as he was a good distance off when she pulled out then he would not have had to of braked and second, he made himself look a complete wan*er which I may have let him know when he drove past me. What the hell is wrong with people on the roads in this country, no one will let anyone out, or merge in turn because heaven forbid anyone be in front of them. J A Y S U S, get a grip. (rant over).

Lots of pain in my legs and feet. Been quite ill over the last week with shakes, headaches and other little problems but just another thing that although I will never get used to, I know will happen but it is really not good when it does. My memory is REALLY getting worse too, I have spent the last few days looking for a prescription that I thought I had put in but have NO IDEA where it is so I will have to go and ask for a duplicate. It is not for medicine so there should not be a problem I hope but it has highlighted to me how bad things are getting. It has always been something that we have made light of in the bungalow with family and friends but not after the prescription episode, I am not finding any funnies in the memory problem now. I have to see my solicitor in a couple of weeks to discuss specialist reports and one of the things I am going to have to highlight again is the whole memory thing, I swear to God I am worried that I will forget where I live soon!

So that’s it for now, off out to the woods and forest tomorrow in the Overlander where I hope to get some good footage of the day and some photographs to accompany it to share with you. Until then though, I am going to join forces with my Brother Darren on the X Box and see if we can complete another co operative campaign~(I am such a child).