My Wife bought me a radio controlled helicopter for the first Birthday of mine after I got out of hospital. She knew that I would need somethings to occupy my mind and to relax with, the intention was to allow me to learn to set up and fly the helicopter but very early on it became apparent that this would not be the case. The engine was fuel powered and needed to have a starter rod inserted in the top of the engine and a glow plug to heat the fuel for it to start. Then, once started you had to ge tout of the way to avoid being hit by the rotor blade. In the wheelchair this was not happening. I had a freind help me a couple of times to put it on to the training cradel and start it up for me but it was not something that I could do on my own and therefore it sat in the box. I was hoping that as I got used to doing things for myself and becoming more able to move in the chair and leaning forward that I may be able to do it at a later stage and so I held on to it. After a year of being out I tried again and had the same problem, I simply could not fit it to the cradel, let alone start it and so it went back in the box and sat doing nothing. Finally I decided to sell it and so advertised it.

I had a guy who was interested but seemed to want something for nothing and so no deal was struck. I readvertised it  and had some interest by way of questions but again, stupid offers and then this guy came back with another offer, which was less than his original and so no deal was struck. Finally I advertised it again three different ways. Again the guy came back and after a full day of texts back and forth it looked like we had a deal for a swap. My helicopter, minus the radio gear for his aeroplane, minus the radio gear. All looked good until he finally told me something that I frankly found ridiculous and as such, no deal was struck. He now has his aeroplane still for sale but I had a guy ask me about the helicopter who sounded really interested, the only snag was that he wanted me to post it. I took it to the Post Office and got a quote to post it and let the guy know who was more than happy and so, parcelled up with bubble wrap and brown paper it was on it’s way. Concurrently to this I had been looking for an aeroplane to learn to fly with, I found one and messaged the guy who was very honest and informative. Unfortunately for me I missed out but messaged the guy to ask him if he would get in touch with me if the buyer messed him around. As a huge stroke of luck, with my helicopter sold I got a message from the aeroplane guy to let me know he had indeed been messed around and that I could go and view the aeroplane if I so wished. So on Sunday morning at 09.00, my Brother Chris came over and collected me and off we went to see the plane, I have to admit I was a little excited!

It took around an hour to get to the guys house, but as soon as we arrived his wife offered us a drink and he endeavoured to get me round in to the back garden. Needless to say, this did not happen. His house is not designed for wheelchairs but that did not matter, he brought the aeroplane and the controller to me at the front of the house where he proceeded to teach me how to assemble, fuel and start the aeroplane as well as how to check the controll surfaces. He demonstrated taxiing the aeroplane and also how responsive the controlls were. With his demonstration and instruction finished he then asked me if I had any questions of which I had very few as he had covered almost everything in his demo and talk. I decided I would like to purchase the aeroplane and he then went back in to his garage. He came out with several extra’s that would essentially mean that, aside form the fact that I would need an instructor, I could fuel and fly. With the deal complete Jon, that’s the guy with the aeroplane, helped my Brother load the aeroplane and all of the extra’s he had given to me in to the car. I thanked Jon for his hospitality, instruction and demonstration and he told me that if I needed any questions answering then I should simply call or mail him and he would help where he could. I could not have met a more helpful guy, and feel good knowing that he has supplied me with all of the extra’s so I can fly as soon as is possible.

We got back to the bungalow in a little over an hour and Chris took the aeroplane in to my home, ensuring that he told my Wife that he was simply the driver as he past her. My Wife helped me get out of the car and we went inside. Chris had put the aeroplane in the front room and rested the wings on top of the fuselage to show what it looked like. It was at this point that I had a sudden thought, a realisation if you will. A realisation that it was bigger than I thought it was now I had seen it in the front room, and that I now needed to think really quickly for an answer to the upcoming question from my Wife. And there it was…. “Ok Love, it is very nice, but exactly where the hell do you think you are going to keep it?” This was an extremely valid, good and sensible question that deserved a valid, good and sensible answer….with hind sight, “The bedroom” was possibly not that valid, good and sensible answer that was being sought. Lucky for me that my Wife loves me and has put up with my stupidity for as long as she has or I fear, the aeroplane may well have been able to fit in the bedroom, in a cardboard shoe box! 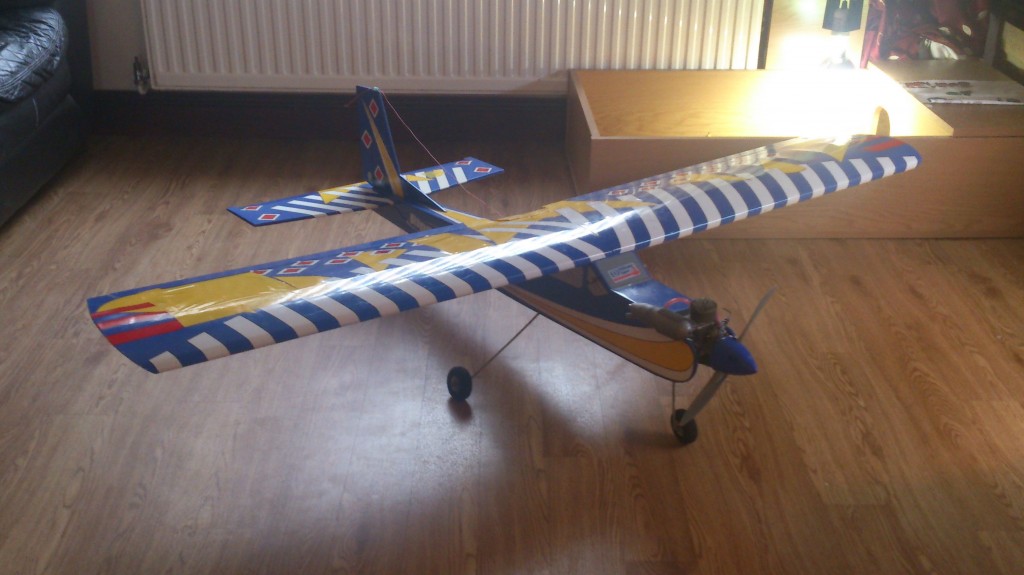 So as it stands at the moment I am waiting to hook up with someone I know to show me how to fly, I am hoping to join a flying club so that an instructor can teach me how to fly, and my aeroplane is in the two pieces it should be in when not flying, and is sitting on the dining table in the extension.

Today (Tuesday), I had a conversation with an accountant who spoke to me about my wanting to start my charity. We went through the whole saga so far and he gave me some thngs to think about and some things I needed to look in to. He is also trying to hook me up with a friend of his who sets up charities for people and sorts all of the paperwork out, letting you know what needs to be done and the like along the way. I am passionate about wanting to succeed in strarting this charity that I want to do and really hope that the accountant will be able to help, and of course that it takes off and does well at what it is intended to do. I am going to get a date from the Royal Air Force with regards to my abseil that they are helping me with and although it will be only a short time between now and then, I am hoping that I may still be able to raise a reasonable amount of money, so please watch this space for further information and if all goes well and you are able to support by donating then please do.

So tomorrow then will be nose in computer screen researching, phone calls to Graham at the R.A.F and also to Op Nightingale with regards the dig just after I come out of hospital amongst a whole heap of other little taskings! I hope that you are all well and that you are not too cold, that is what I have heard alot of over the past couple of days, people complaining about the cold. I think you will find that it is probably no colder than last year but because we actually had good weather this summer, the body has got used to being warm and now it is a shock the system that the sun is not out. Don’t worry though, another few weeks of this and you will be back to the default setting of body coping with the chills and all will be well again so hold off on the heating people, be strong!