Ive been busy studying the flying book in preparation for my trip to RAF Cranwell for interviews and tests in the hope of being chosen for a flying scholarship. Not constantly reading as it tends to just clog up the grey matter so I will read the chapter and do the test questions and then if the chapter has been easy or something I am familiar with then I will go to the next chapter and do the questions and then take a couple of days out before I briefly run over the previous questions and then go on to the next chapter. All six chapters have been completed now and so I have now started at the beginning again but first I have a go at the questions. In the even that I get the questions right, I will leave the chapter and go to the next. I hope that I can retain the information that I need to pass the tests at Cranwell but then of course it will be down to the interviews. I’m looking forward to it and will just have to see how it all goes. Suffice is to say though that you will know, because it will be something that I will write about.

I’ve been packing ready for my trip to Germany too. It is ninety nine percent finished and Wifey has just popped to Tesco to get a couple of personal admin items for me. Then it will be a quick tip out of the suitcase and re pack ensuring I have absolutely everything I need for worst case admin scenario. I have posed the question on a FB page that I started with a friend who I met in the spinal, unit specifically for Spinally injured people, to find out about which is best to manage my bladder while in the colder climate. Sorry, this will make no sense to most of you so let me explain. I have been massively fortunate as I have been allocated a place by Battle Back which takes injured service personnel on different activities to allow them to undertake things that they possibly may not have thought possible since their injuries and also as treatment to a degree. The activity that I will be taking part in is adaptive skiing in Germany. I have never tried to ski and to be honest was not overly successful at sledging when I was able bodied but I am really looking forward to trying out the skiing. So that explains the cold weather bit.

The bladder bit then. With my spinal cord injury it has left me with almost zero voluntary movement of muscles below my chest. I do however have extremely reduced feeling below my level of injury which is T3-T4 (roughly nipple height, give or take). So how does this affect my bladder? Your bladder is a muscle and as you grow up you learn to control it. Hence when you are a baby you have no control. Now I can not relieve my bladder naturally and as such I have to self catheterise. In essence I have to insert a catheter down through `Jr` and in to my bladder to empty it. As you can imagine, this got me thinking about how the hell I would manage this on the slopes. I can feel when I need to go but I need to go very quickly after knowing I need to go. With all of the clothing and god knows what else, I am concerned as to how I would be able to go. I therefore asked on my page whether it is best to continue with the self catheterising or whether I would be better to have an indwelling catheter for the trip. I would be putting an indwelling catheter in for my flight anyway just to be safe but would I be leaving it in while I was skiing. I was asking as the last thing I would want, (for obvious reasons), is to have it in and run the risk of pulling it out from the result of a fall. Sorry, in dwelling catheter; It is a catheter that I will put in in exactly the same way as I would normally to empty my bladder but once it is inside my bladder I will use a syringe of sterile water to inflate a balloon, that is part of the catheter, which will keep the catheter inside. What this means is that my bladder will not fill as the urine will be constantly draining as the bladder is open. To stop this then I have a valve attached to the top of the catheter which I can open and close to empty the bladder, this in turn is connected to a bag which is strapped to my leg which I simply empty periodically. The advantage of this is that I should never have an `accident` as I always have the bag attached.

So the outcome was that I have fitted the indwelling catheter this morning in case I have any problems with it and that those who have been skiing and require a catheter to `pee` have said that if you can go three to four hours between needing to `pee` then simply self catheterise as normal but those who have to permanently have indwelling catheters anyway have said that the likely hood of accidentally pulling the catheter out is so remote that it would be ok to leave it in. So I have decided to see how it goes for the first day of skiing and make my decision from there. Just one of the things that I now have to think about as part of my new life as a paraplegic. Gone are the days of me simply grabbing a bag and heading off, sleeping wherever and doing whatever I wanted to do, now there are so many factors that I have to take in to consideration, the toilet situation being one of those very factors which stopped me from having a really good evening of games and drunkenness and staying over with my friends at my Army Reserve Centre, at our last EVER Company “Smoker”.

And so on to the aforementioned “Smoker”. A “Smoker” is essentially a night of games, socialising with the members of the Company and of course, some drinking of alcoholic beverages. The reason for this “Smoker” last night was because on the first of April this year, 6th Battalion The Rifles will be losing what we consider to have been the best Company it had, `B` Company based in Taunton but with a Platoon at the Battalion Head quarters in Wyvern Barracks, Exeter. They will be joining the HQ Company as an asset believed to be Assault Pioneers while the two Platoons and the Company HQ will become a brand new unit; 675 (The Rifles) Squadron Army Air Corps. We are all incredibly sad that `B` Company will cease to exist but we will embrace the new unit when it is born. I wanted so much to stay with my fellow members last night, to have a really good drink and join in with all of the games and general cocking about like I used to and whilst I know full well that the Company members would have helped me, I just did not want to take the chance on having an accident. Having an accident due to excessive alcohol is normally laughed off and the person will be ripped for a short while afterwards, it’s just what happens, and it is something that I too would have laughed off and endured the piss taking in the past but it is different now.

I have several people that I know would not bat an eyelid if I did find myself in such a situation and would assist me with nothing more than some amusing comments which would not offend but I don’t know if I feel comfortable about possibly having to put them in that situation. Two of my friends spoke to me last night before I left briefly and told me that when I feel happier,  and I decide to stop over one day and in the event of anything happening, it will be dealt with. Anyway, here are some of the games which for many of you will make no sense at all, but to some will raise a smile and maybe a giggle.

Our very own “Jack Sparrow”? 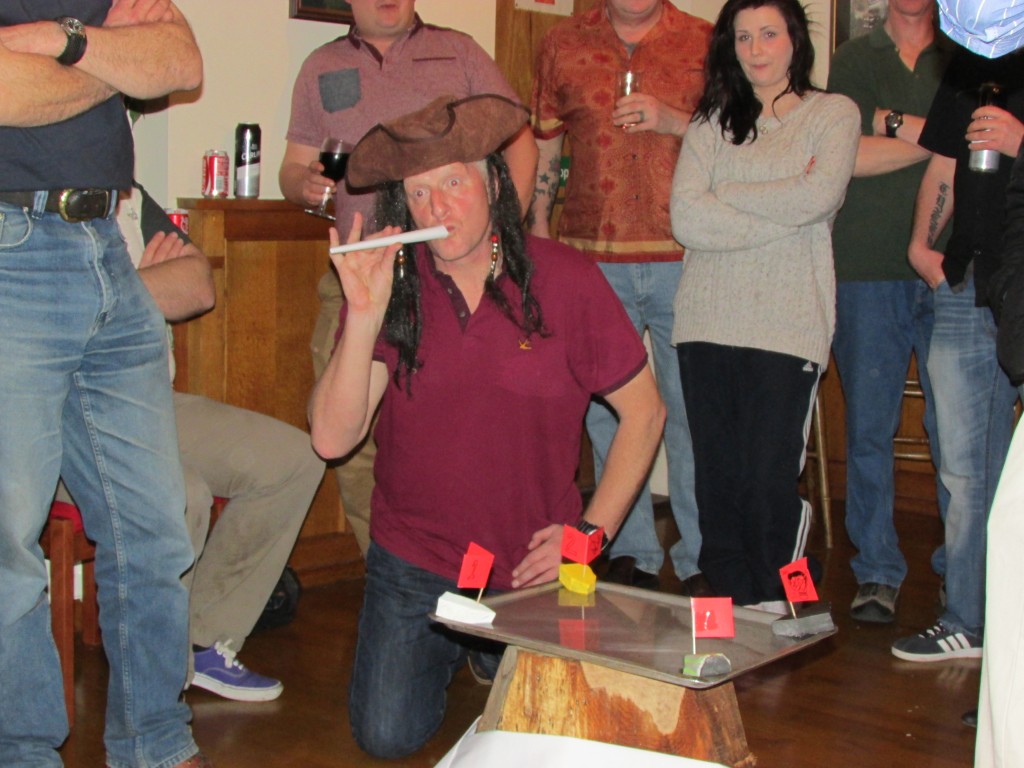 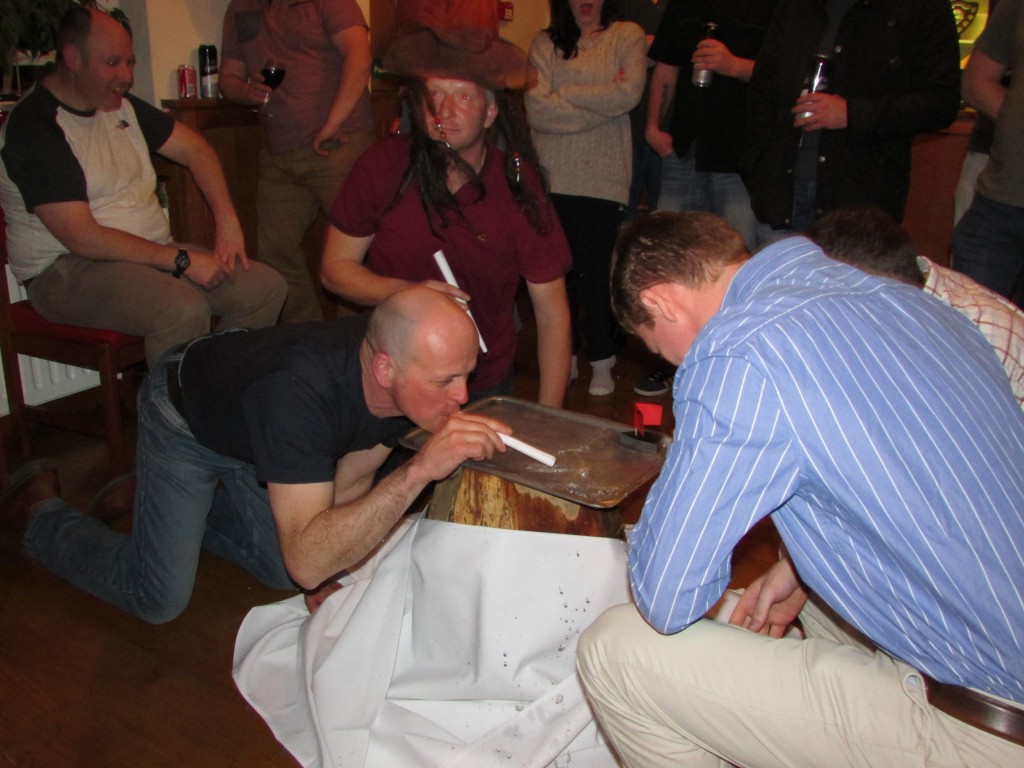 Then the boat race of the Riflemen, didn’t see the high seas coming! 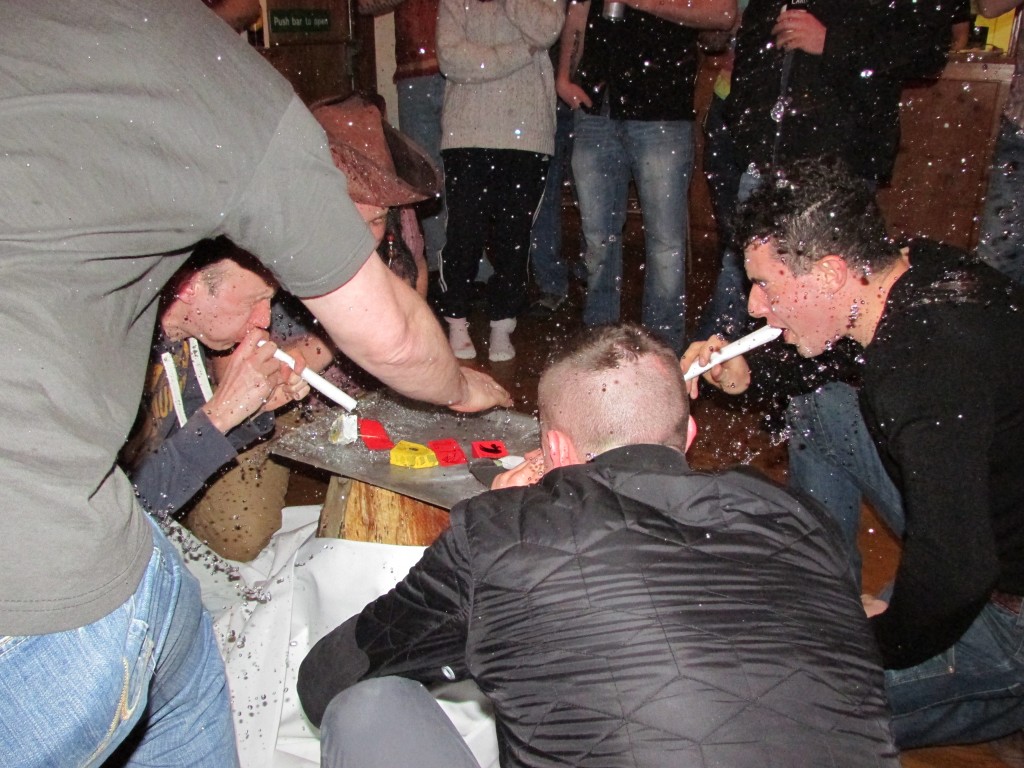 Our CSM, `striking a pose`. 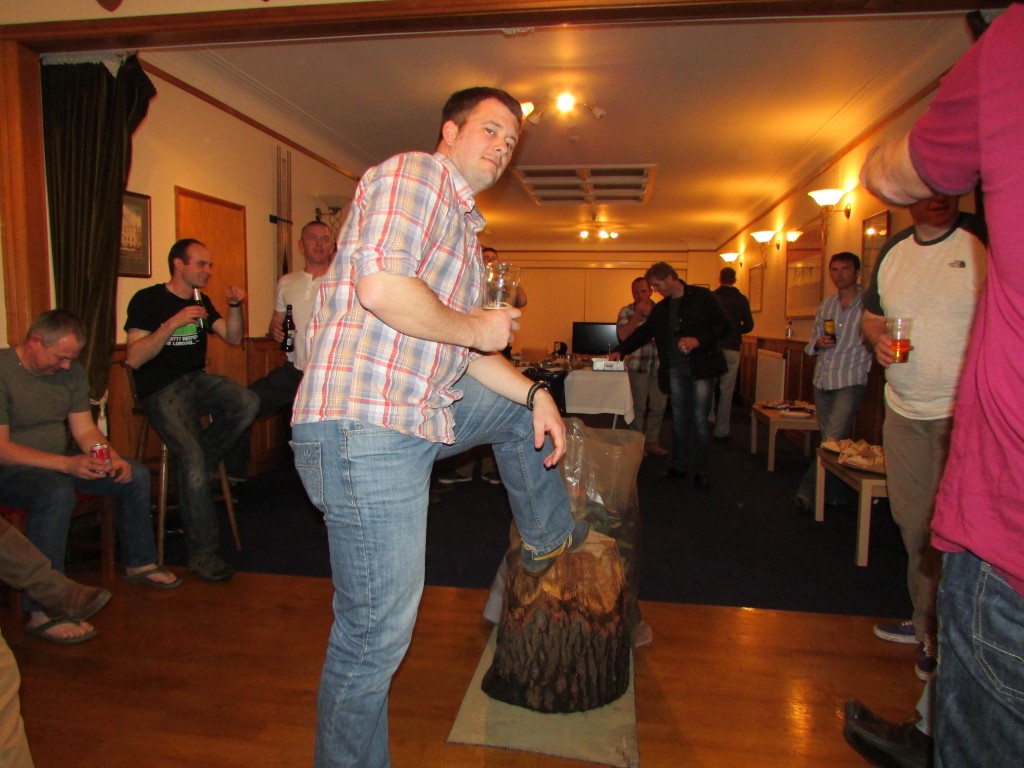 A relay race of dressing up and eating chocolate. 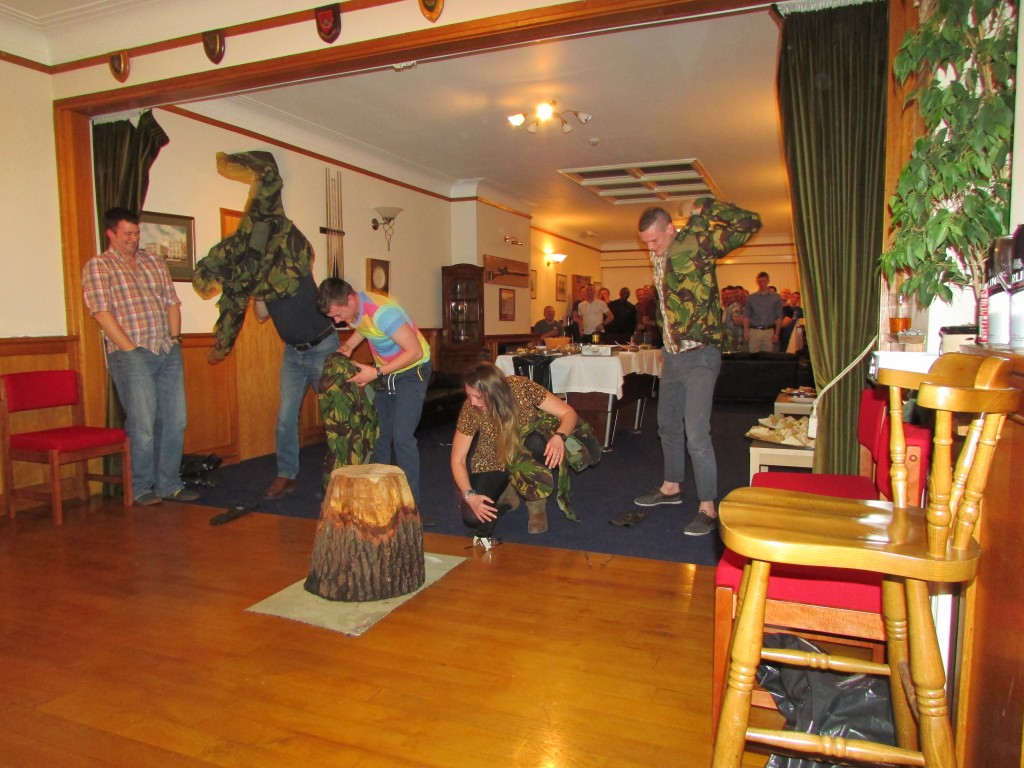 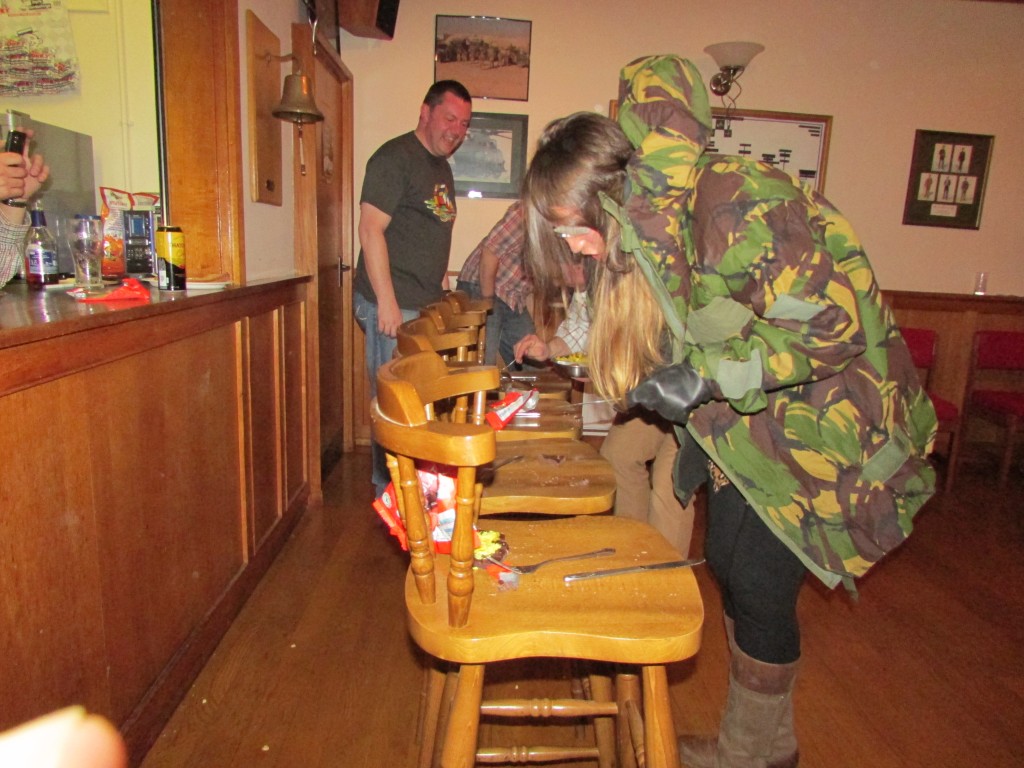 Going well, too well and so the OC “ran some interference”. 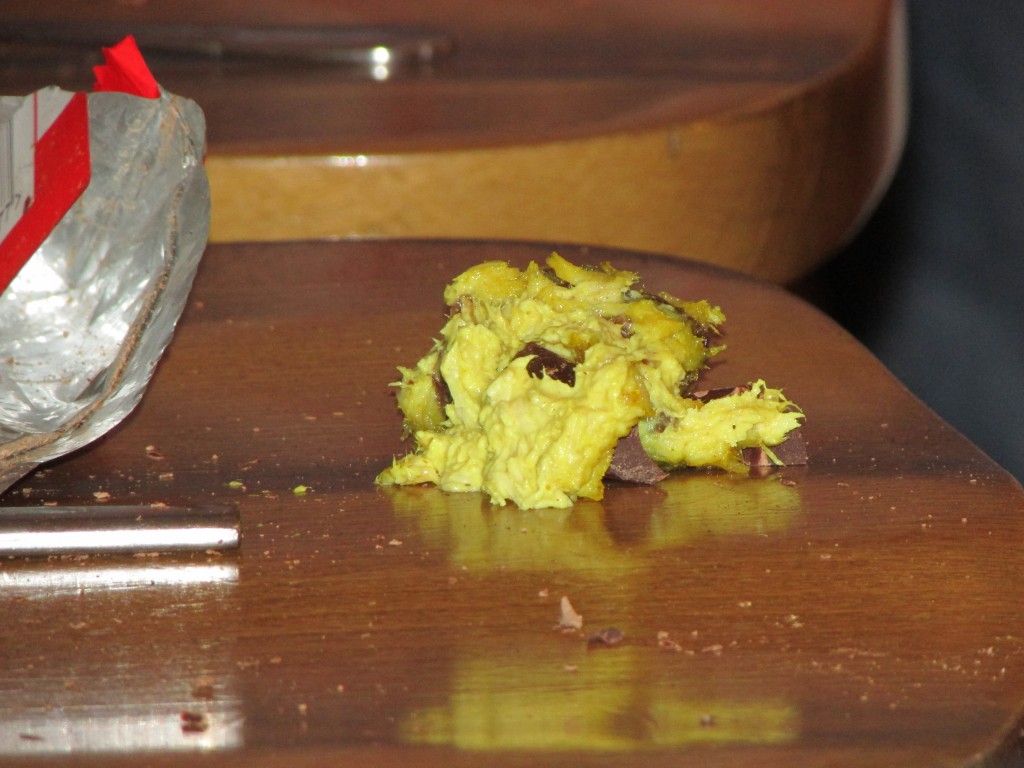 Then it was the turn of the recruits to hit the nail. 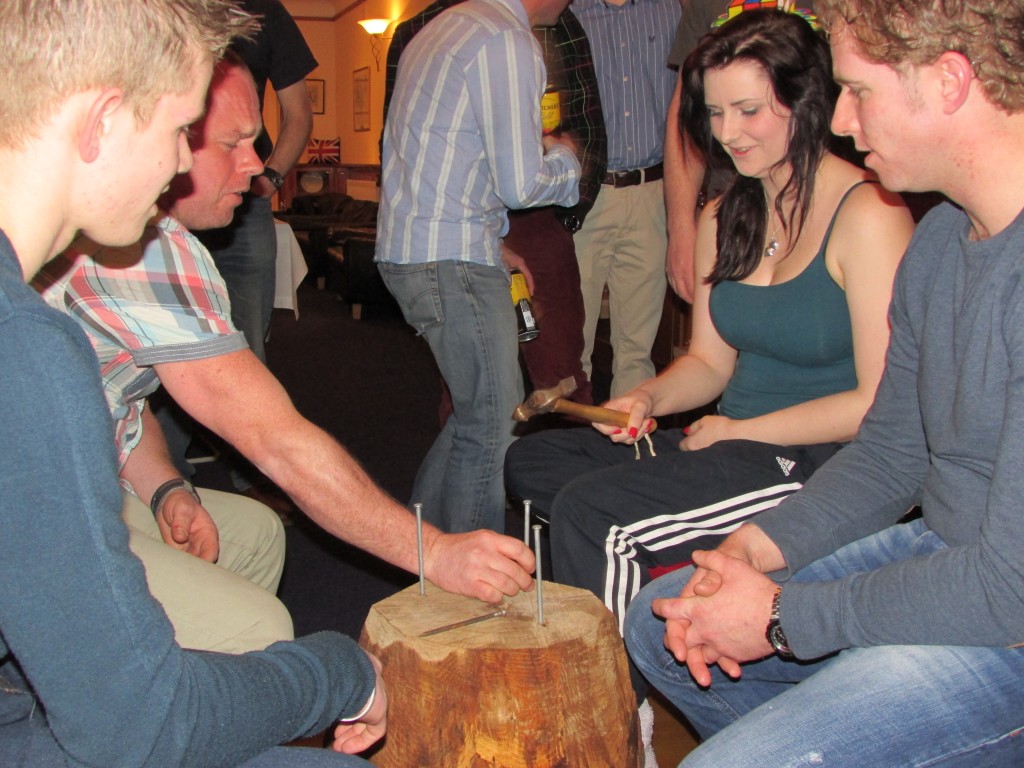 The Junior NCO’s had to race eating the cream crackers. 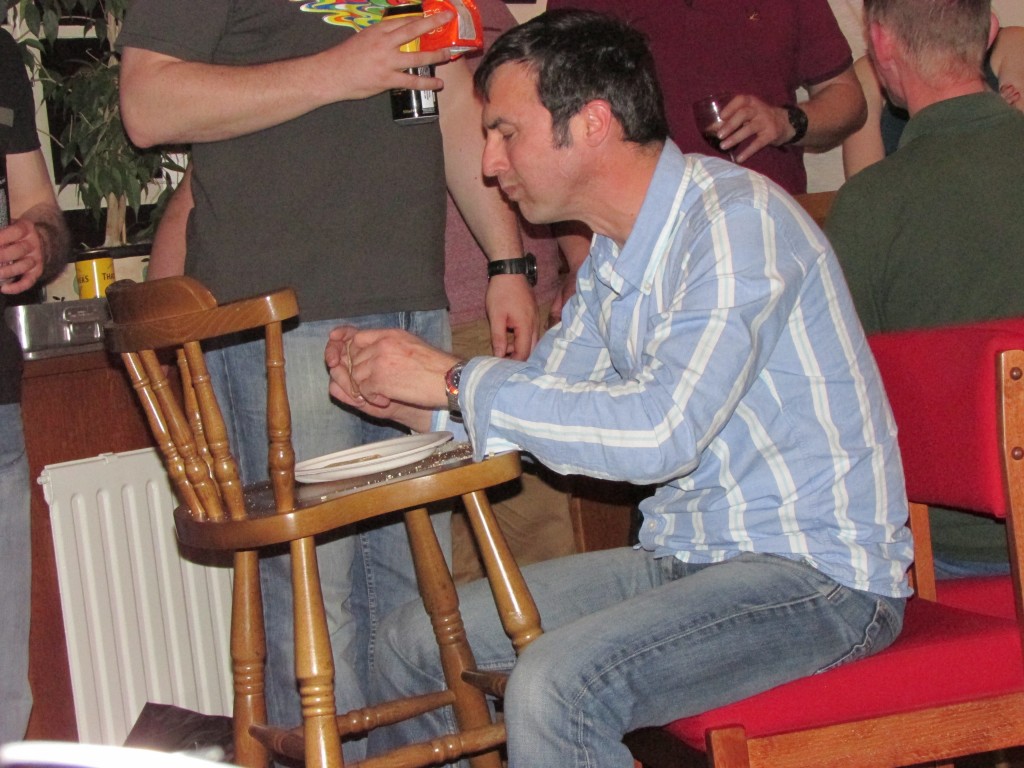 And the Senior NCO versus the Officer in the “slap with a spoon”, the Officer clearly got the shit end of the stick much to our amusement. 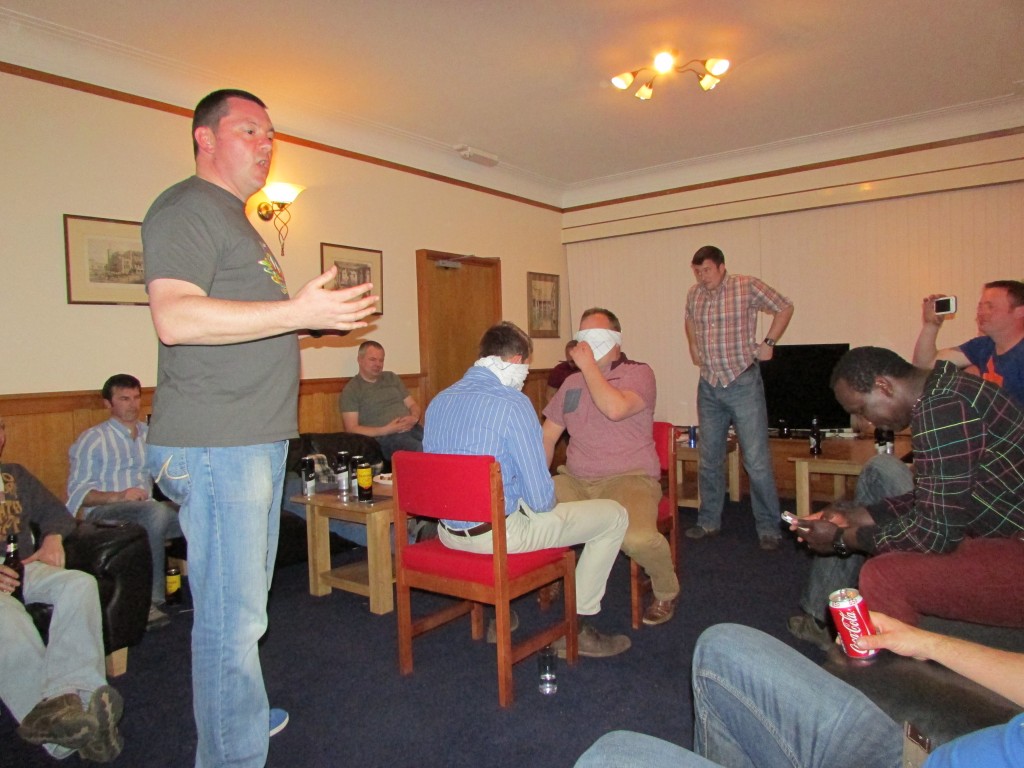 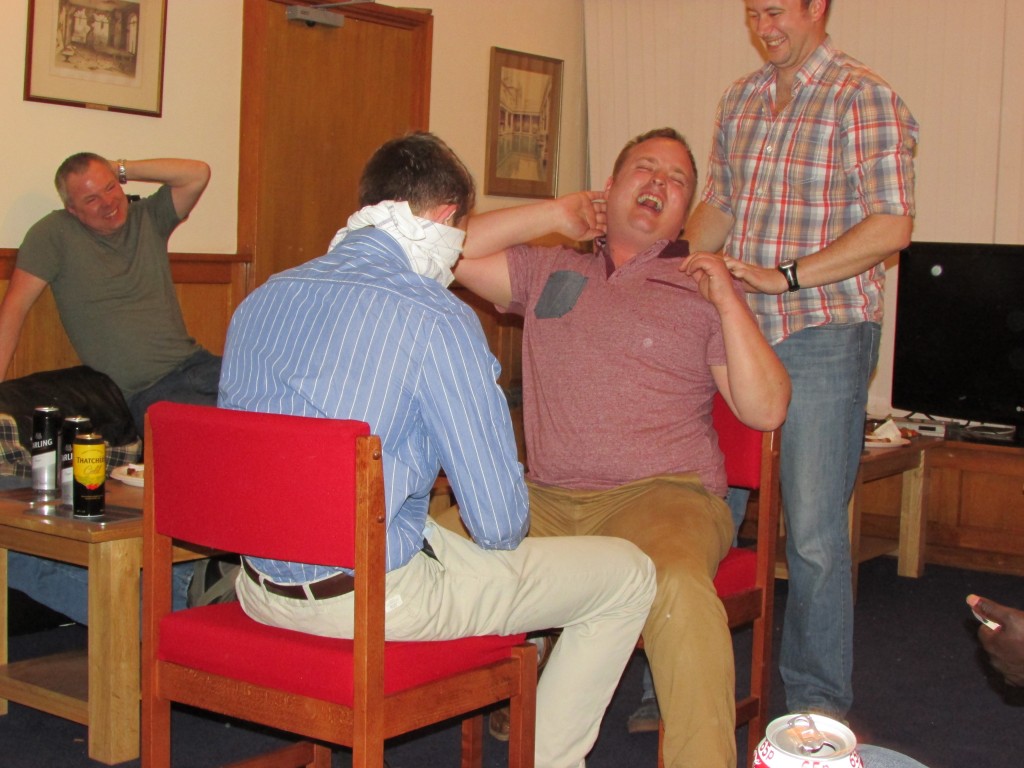 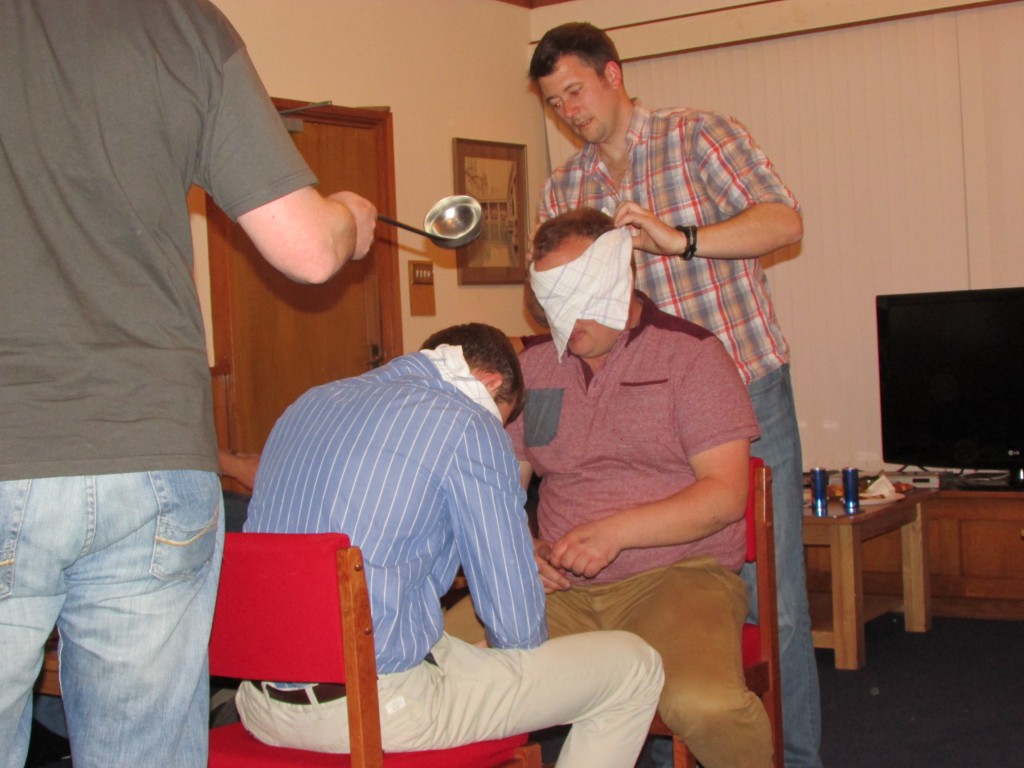 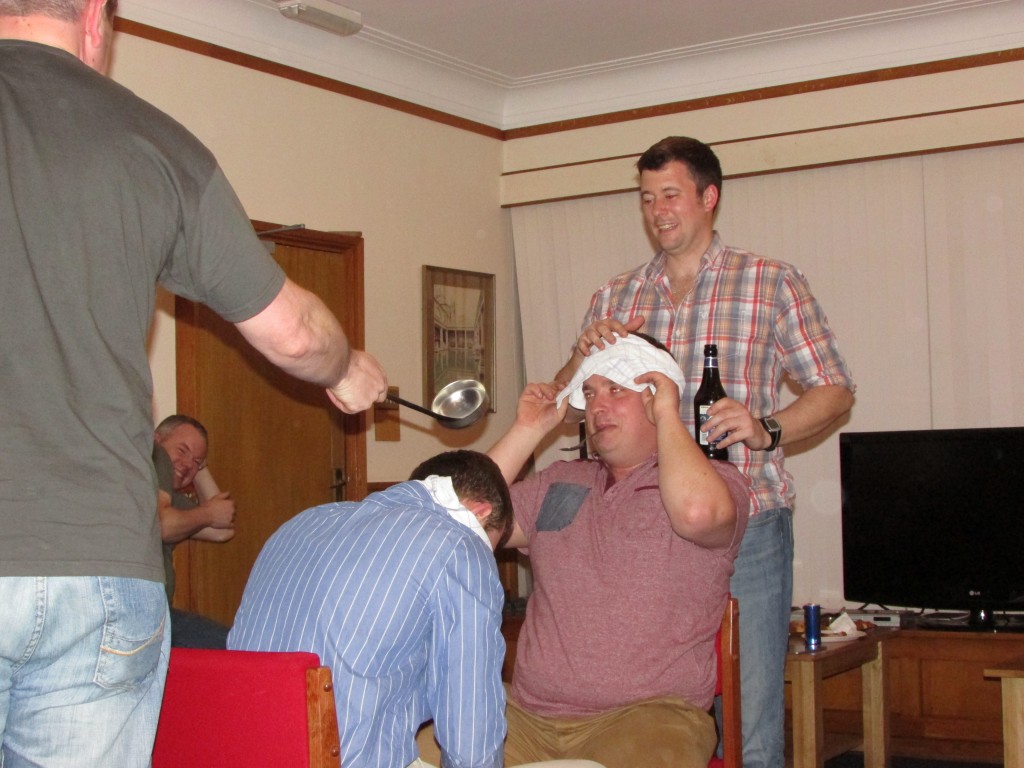 A really good night. I’ll try to let you know how the skiing goes if I can but if not it’ll be when I get back.

Have a good day.