It’s been quite a good week this week. I have been out and about in the power chair as much as I have been able, making the most of the particularly mild weather that we have been experiencing. I have made trips up in to the town several times simply to go to pick up a paper or to post a letter to escape the bungalow. I am not a lover of the inside which is why I was a delivery driver and soldier, the outside is to be viewed and enjoyed and even though it may only be a trip up in to town, it is still outside. I made a trip in to Taunton on Wednesday to meet with someone from the Rifles office, a gentleman who I had conversed with on several occasions and had met a couple of times, one of which was at the awards ceremony a few weeks ago. It was here that I was invited to meet with him at the Taunton office for a cuppa and a chat about Cyprus, fundraising ideas that I had and how things were going in general. I had arranged for this to happen on the Tuesday of this week and went to the bus stop in order to arrive in time for our meeting. Unfortunately, the bus already had one wheelchair on it and as such there was no room for me to board as well. I returned to the bungalow where I called the office to inform them that I would be unable to get to them in time for the cuppa and chat as I had been unable to get the bus. It had been something that I had should have thought about and maybe caught the earlier bus but by the same token, you have to be a little realistic on exactly how long you are going to spend aimlessly rolling around simply killing time, especially as I had specifically made the arrangement for the Tuesday as I would be able to go on to the AR centre for the evenings training.

Having made the call and re arranged for the following afternoon, I took a little time to have a cup of tea and watched a little television until the time came for me to again make my way to the bus stop in order to get over to the evenings training at the ARC. I had the intention of visiting my friend as I do sometimes before going to the ARC but due to a personal admin issue I was unable to leave the bungalow in time to make it and so I waited for the time to leave to catch the next one. Leaving with the normal time to catch the bus, I left the bungalow and was helped up the road by my Wife to get to the bus stop. I have to cross a main road to be able to get to it and as it is now dark in the evenings she helps me to get across. There is no pavement for me to be waiting on for a gap in the traffic and vehicles parked up make it difficult to see traffic coming from the left. It is only since being in the wheelchair that I have noticed how differently things are that I used to take for granted, things I now have to think about for instance, there is no running across the road in between the traffic as I have to wait for a really large gap to get across. Trying to catch the eye of the drivers to ensure that they have seen you rather than take it as read that they have before you cross in front of a stopped vehicle, (nearly come a cropper once or twice on that one!). Anyway, I made it to the bus stop and waited for the number 99 which I would catch to the hospital or maybe to the college. I would always get off at the hospital and wheel myself to the ARC from there but now with the dark evenings I will often wait until the college as I will be on the pavements all the way to the ARC. This week though, neither would be happening as for some reason, despite being a little early to the bus stop and waiting until ten minutes after the due time I somehow managed to miss it. Bugger!

It is a little frustrating when I miss the bus as it is not a simple case of jumping in the car and being five minutes late for leaving, the bus is hourly and so if I miss one then it can throw the entire day, again this is something I had never considered when I was able to drive. My Wednesday appointment for the cup of tea was not going to fail and so I arranged for the time I would arrive to be sometime after lunch as the gentleman I would be meeting was going to be in all afternoon. I had decided as well to use my power chair due to my left wrist causing me some discomfort and at times a lot of pain. This is something that I also get in my right wrist and to give them a chance I will use the power chair. I was recently prescribed splints for them for when they cause pain, it is something that I am aware I will suffer from for the rest of my life due to the extensive damage caused during the collision. I still consider myself extremely lucky to be able to use them at all and to that end, whilst the pain in them is bad it is something that I have to live with, better this than have no use of them at all I think anyone would agree. I arrived at the bus stop in my power chair with a good ten minutes until the bus was due and only five minutes after my arrival the number 30 arrived. This is a bus which takes a more direct route to Taunton than the normal bus I use but I am usually unable to use this bus as it is normally a double decker and therefore does not support wheelchair access. I took the opportunity that had arisen though and I spotted someone I was positive I knew but memory was not playing ball, thankfully though, the lady said hello and used my name. This was a result as it confirmed that I knew her and then the name came to the front of my head. We chatted all the way to Taunton and in half the time it would have taken, the bus was in the main street in Taunton.

I got off of the bus in the town centre and had a quick look round a couple of places I wanted to go to before making my way to the office to meet with the gentleman for a cuppa. I arrived a little earlier than I had anticipated but he was there and answered the door. The first thing that we had to try to overcome was getting me in to the building. As it is an old military building it is not exactly wheelchair friendly which is what I would have expected. He was not happy about not being able to get me in to the building and so we went to the building across the car park. No joy here either which I did not mind and it actually served a purpose for them as now I am going to return to the building with my portable ramp and help them to find a way to be more accessible to wheelchairs. As I was unable to get in to either building it was decided that we would take a `st-roll` in to the town for a cuppa there. We went to the Taunton castle museum where the gent is the curator, and while we were there I was shown around which allowed me to see how easy it is for me to get around in the chair as I want to take my kids to visit. After my brief tour we sat down at the cafe and had a cuppa and a good chat about many things until eventually we left the museum castle, he returned to the office and I had a look round the shops before returning home on the bus. It was really nice rolling around the town with the sky dark and all of the towns Christmas lights shining, and it was great to see outside of the museum, a skating rink and a large ferris wheel next to some stalls. This was something I wanted to bring my kids to and so that is what we did on Friday evening, and they loved it. 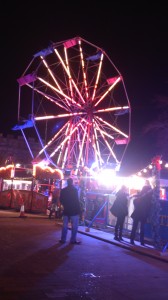 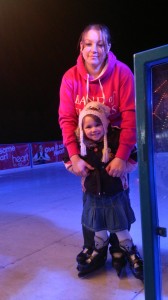 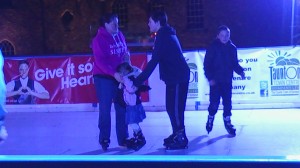 Yesterday, (Saturday), I had a medical at the Marine base. The medical staff tested my hearing and my eyesight and then I had to see the Doctor. She spoke to me about my injuries and asked me questions, the answer and information will now be used by her to write a report which will be used to start the process for me to go in front of a medical board. This is unlikely to be started until my current medical grading ends in March next year and so it is unlikely that I will be in front of the board until after April next year. She did however say that it is unlikely that I will receive anything but a medical discharge which will be a little more than disappointing but we shall have to see.

Today, we had a visit from Andy and Laura which gave us our first meeting with their new baby which was great, and what a cutie he is, (the baby obviously, not Andy), he was asleep on their arrival and was extremely happy when he woke but after an hour or so he neared his feed time and the mood turned from happy to hungry and then he began to cry, (again I am talking about the baby and not Andy), and so it was time for them to go. It was great to see them and obviously it was lovely to meet the new baby and it was also good to catch up with Emma and Justin too. Emma, Laura and my Wife all went to school together and so it was nice for them to be able to chat together instead of Laura and Andy visiting us and then having to go after a short while to Emma and Justin’s. That is what they normally have to do and had that been the way today, then they would have had to cut their visit short and head off to tend to the baby.

So it has been a really good week this week. I am looking forward to this coming week, one day in particular which you will see and read about. Until then though.