We had a family evening out on Wednesday, we travelled over to the annual open evening at the Merrifield airfield at Ilton. Each year the Royal Navy have the open evening for the local public to go and see what they do at the airfield. It is used to train and practice the helicopter pilots in predominantly the Sea King and Lynx aircraft. 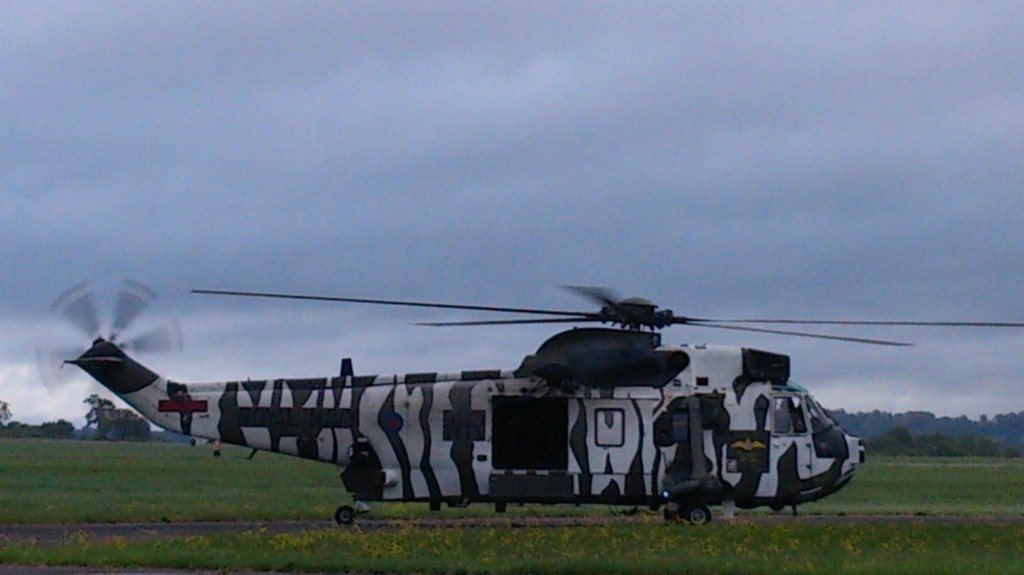 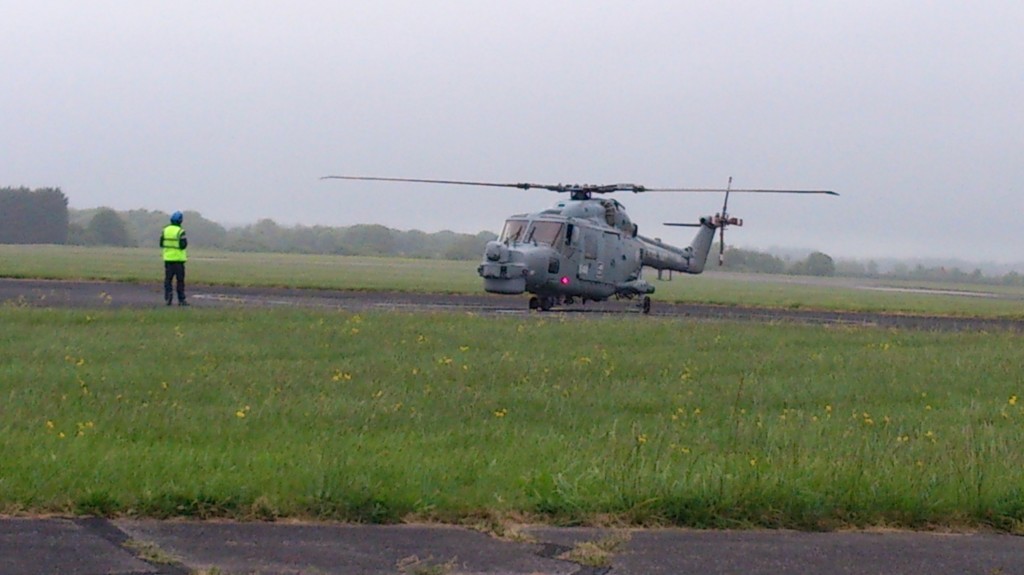 It is not unusual to see a trailer under slung beneath a Sea King…. 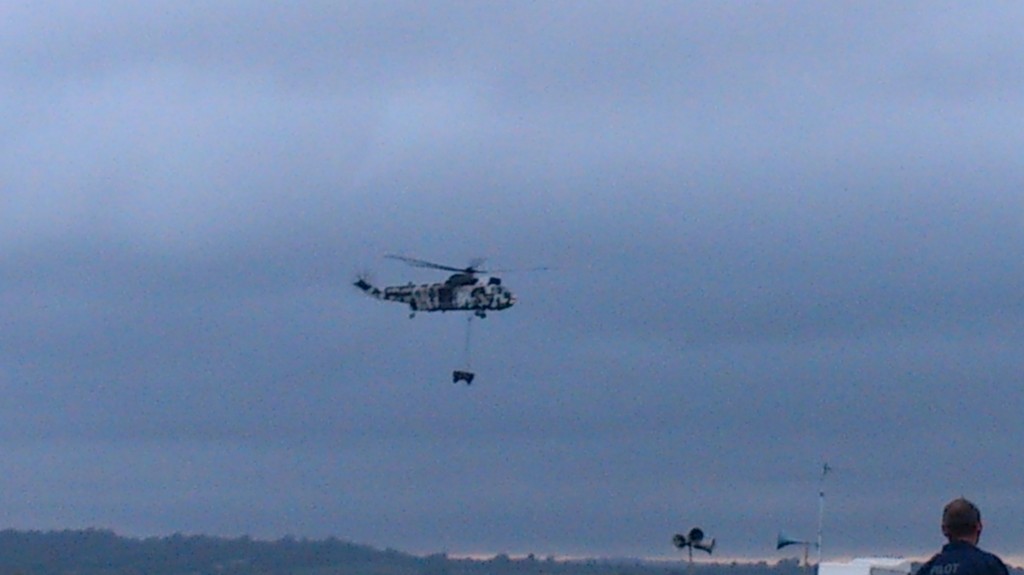 Or to watch a Lynx dive down and run along the tree line, climb up and appear to loop to do it all again effectively running figure eights or to watch both of the aircraft types seemingly fall from the sky as they practice engine failures. 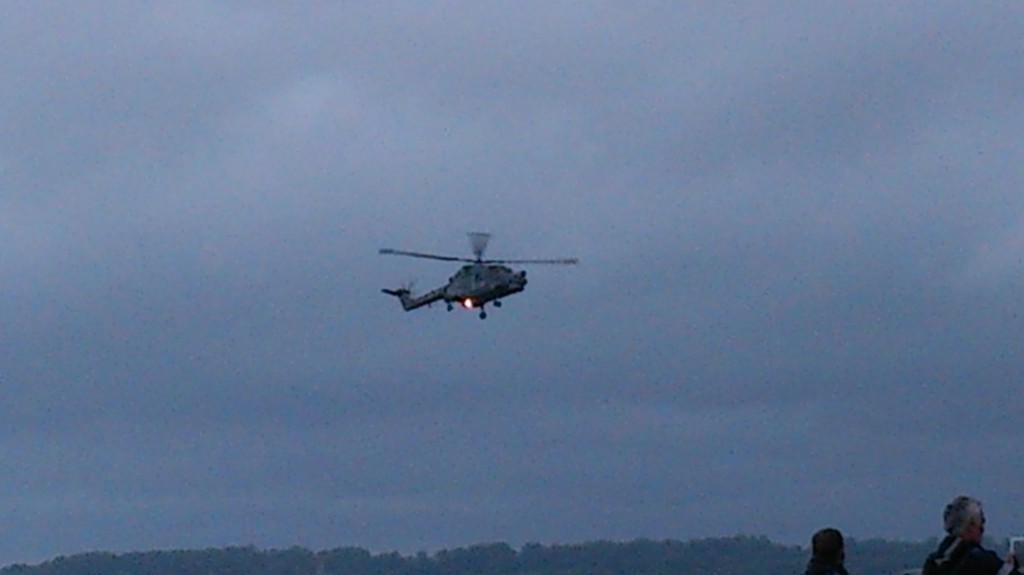 The airfield also operates at night until quite late as it is obviously important for the pilots to be able to carry out all of the tasks and manoeuvres in the dark as it is in the daylight, that is part of the reason for the open evening as it is obviously quite noisy and more so in the dark hours, it allows the Navy to explain to the people who are affected by the noise of the helicopters why it is necessary.

They have a Sea King and Lynx which they fly and demonstrate what the pilots practice and have a running commentary to tell the onlookers what the pilot is doing and the purpose for the manoeuvre. As well as the two display helicopters they have a small static display of Sea Kings and Lynx…. 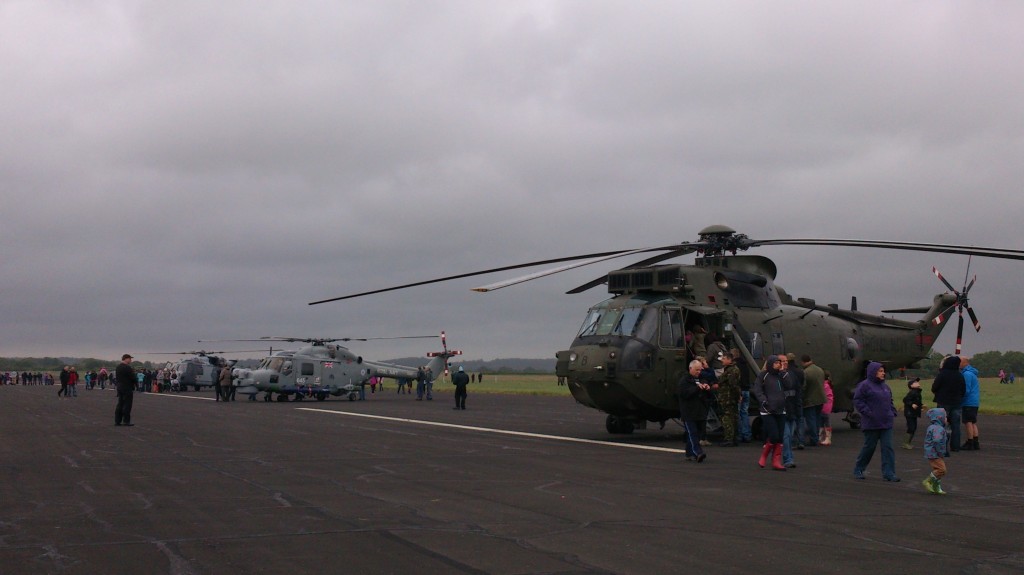 …and generally the Police helicopter if it is available.# 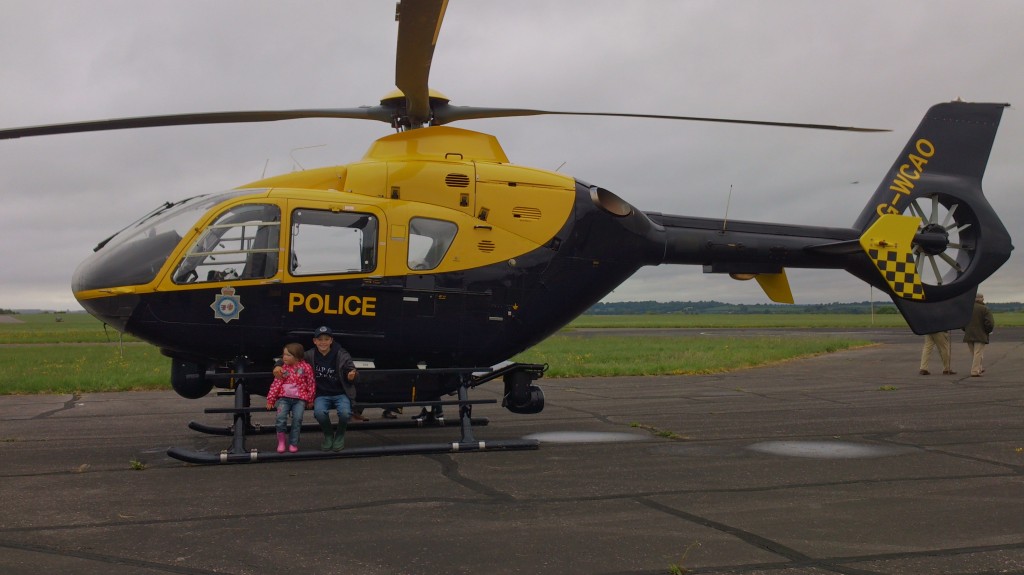 The static aircraft are manned with crews to assist people on to and off of the helicopters and to give informative talks about the aircraft that they crew. This year they had bought a Lynx which was fitted with a large calibre machine gun as well as a couple of the new Lynx Wildcat helicopters which have been chosen to replace the Lynx both in the Army Air Corps and the Royal Navy, and what a bit of kit it appears to be. 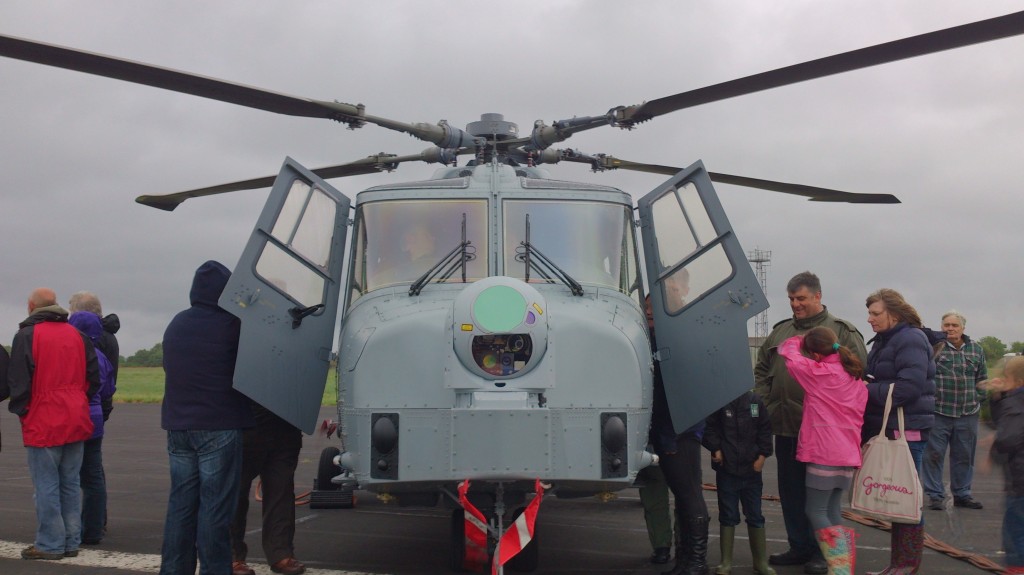 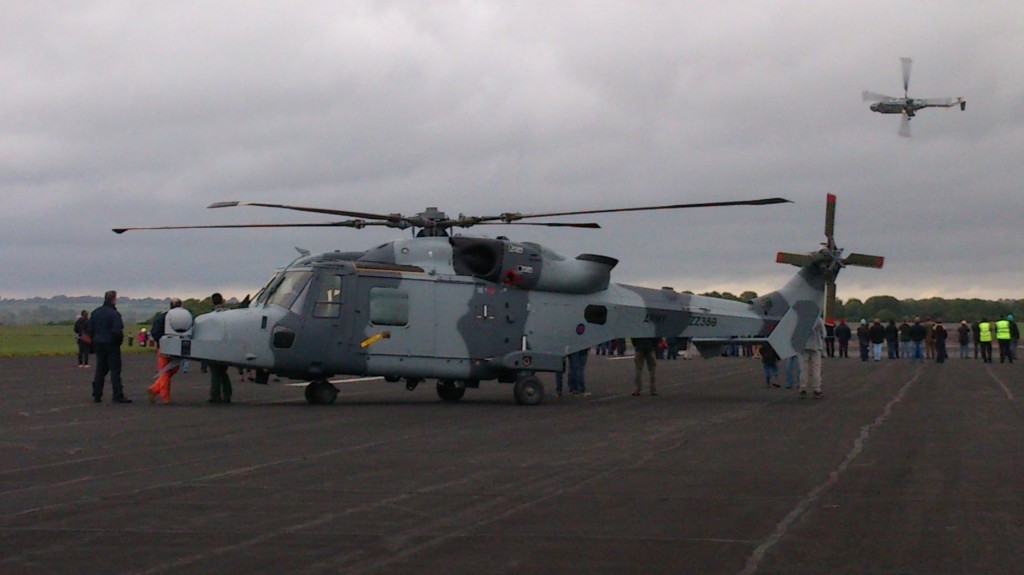 My Son patiently waited in line to sit in the Wildcat and eventually he was helped in to the seat. 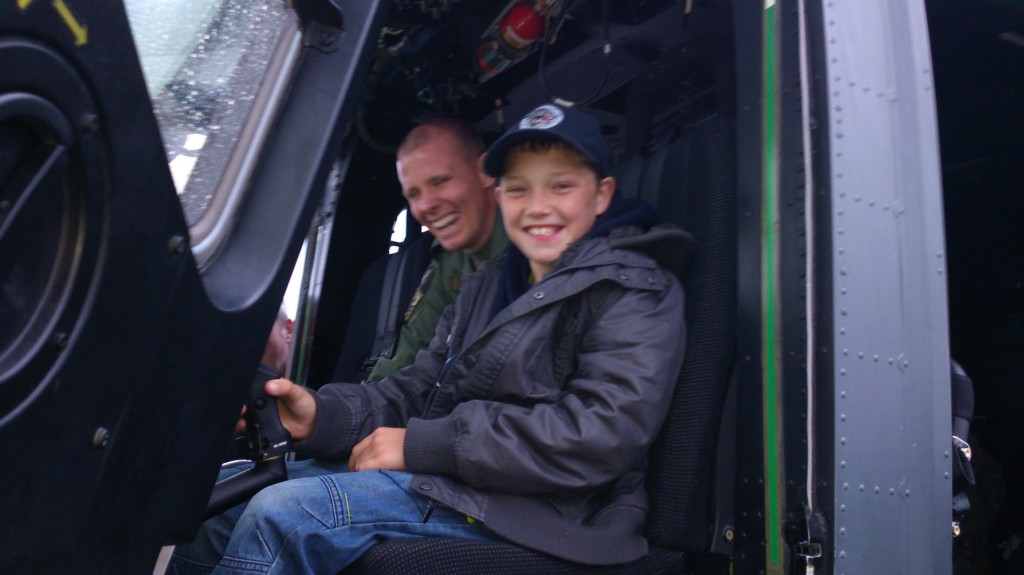 Here he was faced with television screens and the display showing the dials and artificial horizon required to monitor the aircraft while flying it. There is a system on the front of the helicopter which is for targeting, this has a camera in it which was demonstrated by the crew, very impressive. My Son was in the front for quite a while and really showed interest in what they were explaining to him which is good for him as he has serious problems with concentration and learning. 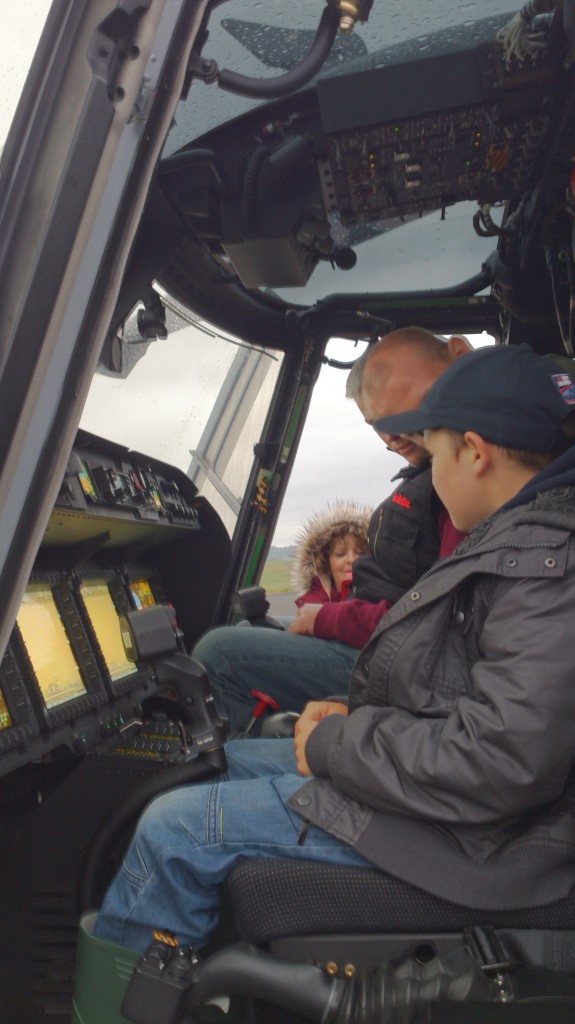 With his talk over, he politely said “Thank you” and was helped out of the Wildcat. He also had a talk inside the Sea King and then found the fire tender. He not only got to go inside but he went up top where the large water canon is and got to spray water. The grin on his face when he came down was immense, he had really enjoyed the chance to mess about on the fire tender and when the demonstration and mess about ended he again said his “Thank you” and left the appliance. It was a really good evening with a good few displays including an appearance and display by the Historic Flight’s very own Sea Fury. 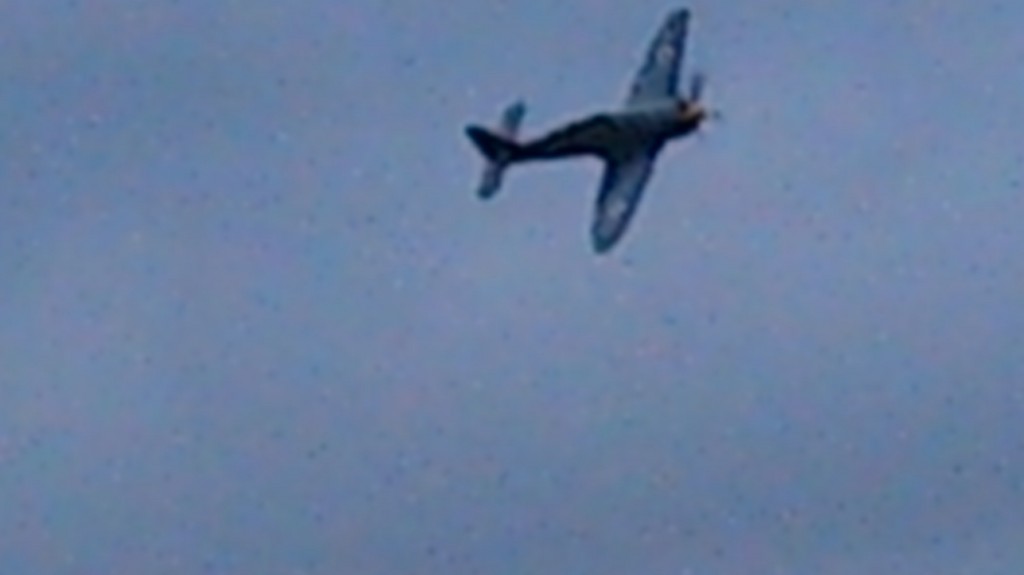 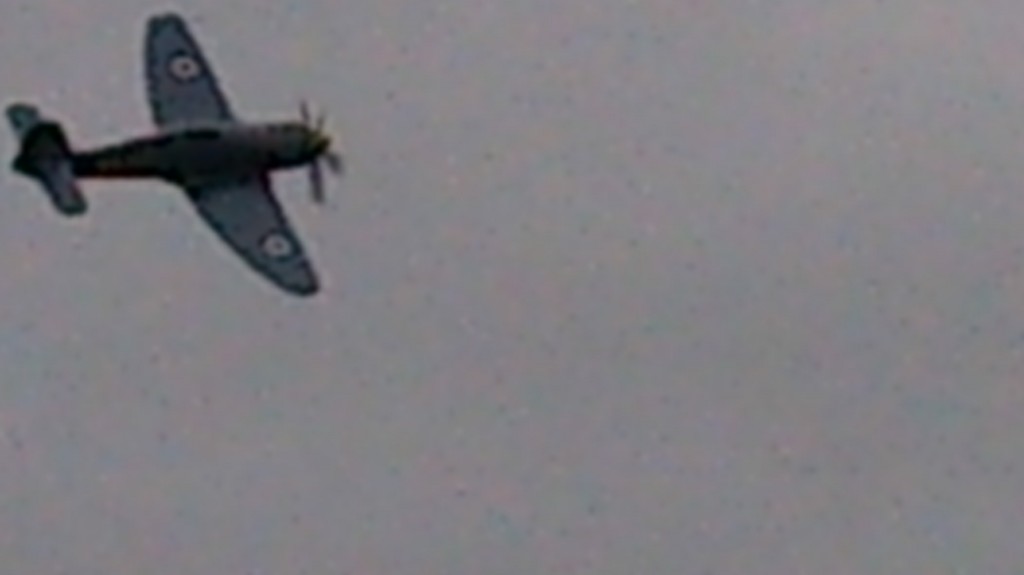 Excuse the pictures but hopefully it gives you an idea of what the old girl was like if you were not familiar with what she looks like. We headed home after a really nice evening where, despite the weather not being brilliant and causing the parachutists to call off, it did not rain and mess the entire evening up. A big “Thank you” to The Royal Navy for another pleasant evening at Merrifield. I was trying to find out if the Commanding Officer of the Sea King Squadron was present as I wanted to thank him in person for his efforts to try to allow the abseil but unfortunately I did not manage to find out.

On the topic of abseil, I have e mailed three new potential venues. One of which has e mailed to inform me that they have to pass it on to their manager and another that have responded requesting me to call them to discuss it which I will do tomorrow and with any luck will secure the venue and a date. The sooner I can do this, the sooner I will be able to start trying for sponsors, I will of course keep any developments posted on the Blog Facebook page.

On different news, the bunnies are growing fast and are now munching on the food we put out for the mother. I reckon it will be another two or three weeks and then they will be looking at moving to new homes, they are cute I’m sure you’ll agree, and I have to repeatedly tell my Daughter that we are NOT keeping any of them. 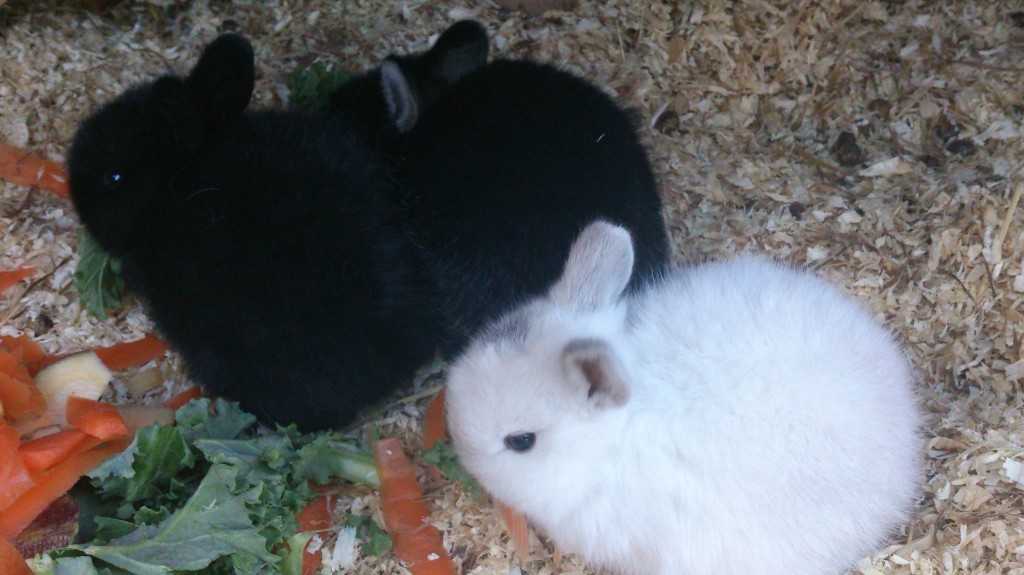 My Physiotherapists came over today after one of them has been off of work. Today we tried a way of getting me in to the chair in the event of me falling out of it in the street. We have been trying to find a way for me to get myself in to the chair for a while now but my Physio was told of a way that I would be able to get in to it and back on my wheels with help. She was a little nervous of trying it and she did say that she could imagine my Wife coming in to the room to find me on my back but in my chair on the floor as if I had overbalanced. We managed it, all be it a little messy on the first attempt as my spasms were a little bit of a problem but generally it was a good effort and something that we can now work on and practice. And low and behold, my Wife did come in to find me in exactly the position I had mentioned and my two Physiotherapists and I laughing. I am looking forward to Monday now for us to practice some more.

So now I am going to leave you with a nice warm fuzzy feeling of cuteness inside. 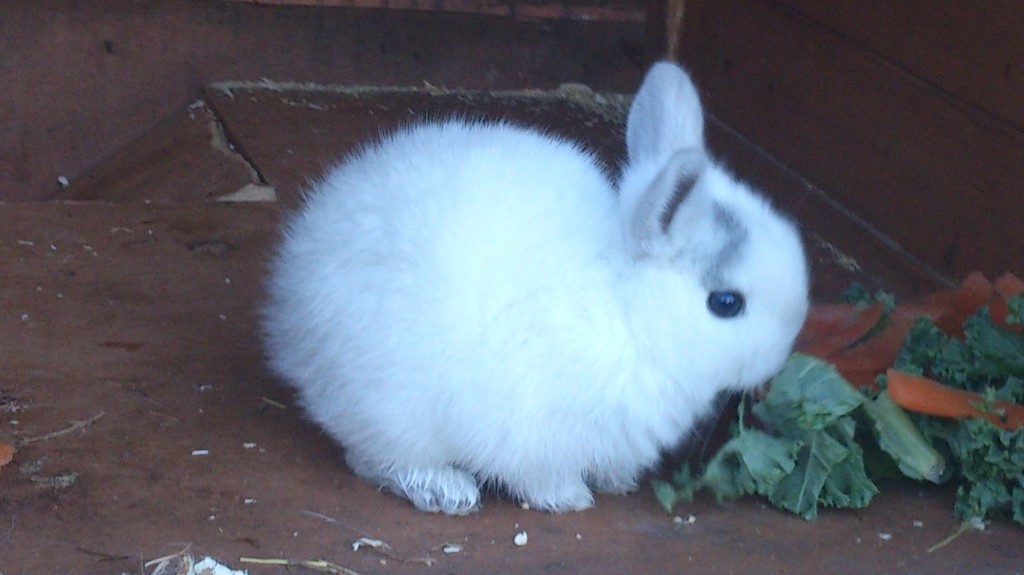