I eventually finished the things I needed to do at around two this morning and was ready to set my bed and myself for the very short night ahead. Time to get up was to be at 07.00…..for everyone else, but Paul and I had to get everything ready for breakfast which meant that we had to be a half hour ahead of them, which meant I had to actually be an hour ahead of them. We had to ensure that their breakfast was ready for them to eat at 07.30 but it takes me so long to get now I needed a head start on the head start! I got on top my bed and undressed, then I pulled the cover back on my bed or at least I tried to as it was caught under one of the legs, to top it off I had not prepped the bed sheet. Fantastic, the only way I could sort this problem out was to get back on to my wheelchair. What a task this was, what happened to the easy times I had experienced when practicing at home? Please tell me that this was not going to cause me problems so early on. I dragged myself on to the chair and then the leg spasms started, I was locked in to the chair unable to move, it had taken so long to get back in to it that Dave and Paul were asleep, I did not want to wake them but what the hell was I going to do? I was stuck. I was now at a point where I’m thinking that maybe I will have to sleep in the chair, but this could go wrong, don’t start worrying too much as this will cause the spasms to worsen, it’s not that bad, it WILL be fine. My leg relaxed enough for me to get myself square in the chair and then came the sorting out of the stuff I should have done to start with before I dropped my fat arse on to the bed in the first place. Paul had pumped up the overlay that the physio had given me and between us we had fitted the sheet when we were setting up the room, I now had to sort out the things stopping me from going to bed. I lifted the side of the bed, freed the sleeping bag and sorted out the sheet problem. Now I was free to get back on to and in to the bed ready to sleep, the time now…..03.00.

I lay with my eyes closed for what seemed to be an hour wondering how I would get on with getting up in the morning, would my legs still be on the bed? Would I be cramped up and stuck, unable to move and resembling road kill? Would I even be on the bed? At some time I fell asleep. I woke to the sound of Paul closing the room door, I did not know what the time was, I did know that I needed to start getting sorted right away though and that I was on the bed. I uncovered and then noticed that my legs had misbehaved and that they were not only bent and twisted but that my left was under my right, this would be a real bugger to get up now. I tried pushing myself up, I tried lifting my legs with my hands but my feet would not slide down the bed, I tried to use the wheelchair which I had kept next to me to get up but to no avail. I had no choice but to ask Paul to straighten my legs for me. Not the best start but I was not going to let this minor thing worry me at this stage. I sat myself up, swung myself round and started my admin. Getting dressed was not too much of a drama, I knew I would not over balance as the bed is much lower than the bed at home which made things a little easier. I did struggle, as I always do, to put my right boot on but Dave kindly helped me using his one good arm while I held my leg, most comical and we did laugh while trying to get the boot on. Eventually, I was dressed, washed and shaved and on my way to breakfast. With breakfast finished and the washing up squared away we all headed to a building just down from the pub where the participants of Op Nightingale’s dig in Caerwent would be given a briefing from Dermot, then myself as the Platoon Serjeant and CQMS and then we handed over to a local historian, John Barnard, who told us of the Roman ruins that Caerwent held. He showed a video that had been shot using a radio control helicopter showing the ruins that had been discovered and excavated, but Caerwent have done something which should be adopted by other areas that unearth such finds, they have put up information boards telling readers of what the ruins are. They have unearthed so many ruins that they actually have sign boards pointing to the next treasure that they have found, they really are proud of what they have found, what the Caerwent of Roman times was like and they want visitors to come and see them. I will not pretend to be a huge follower of archaeology with regards to Roman and Saxon times, I will openly admit that the chance to dig trying to find aircraft of WW2 or any aircraft interests me much more, but these Roman walls and footings and market places that they have found and show off so proudly are incredible. Caerwent is a little town around ten minutes from Chepstow. There is a lovely little pub called the Coach and Horses which sells beautiful food and has a really friendly atmosphere. It is well worth visiting; to have seen the Caerwent of Roman times has encouraged me to pass the opportunity to view these fantastic ruins to you. I simply have to share just some of the pictures of what I have seen today, (Saturday), to you. The first of the pictures is John talking to all of the archaeology students, injured personnel and Op Nightingale staff about the various sites as he gave us a tour. 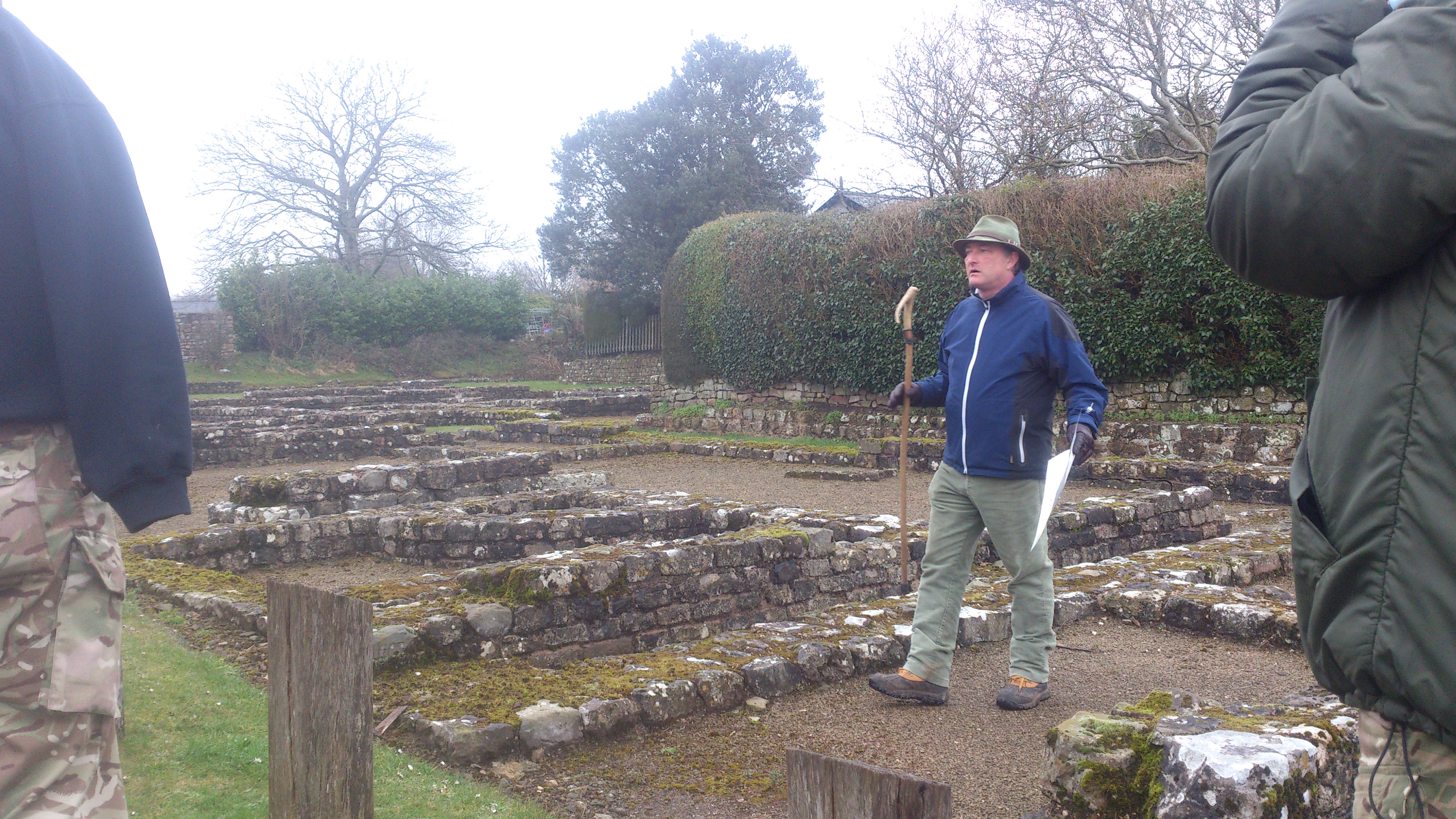 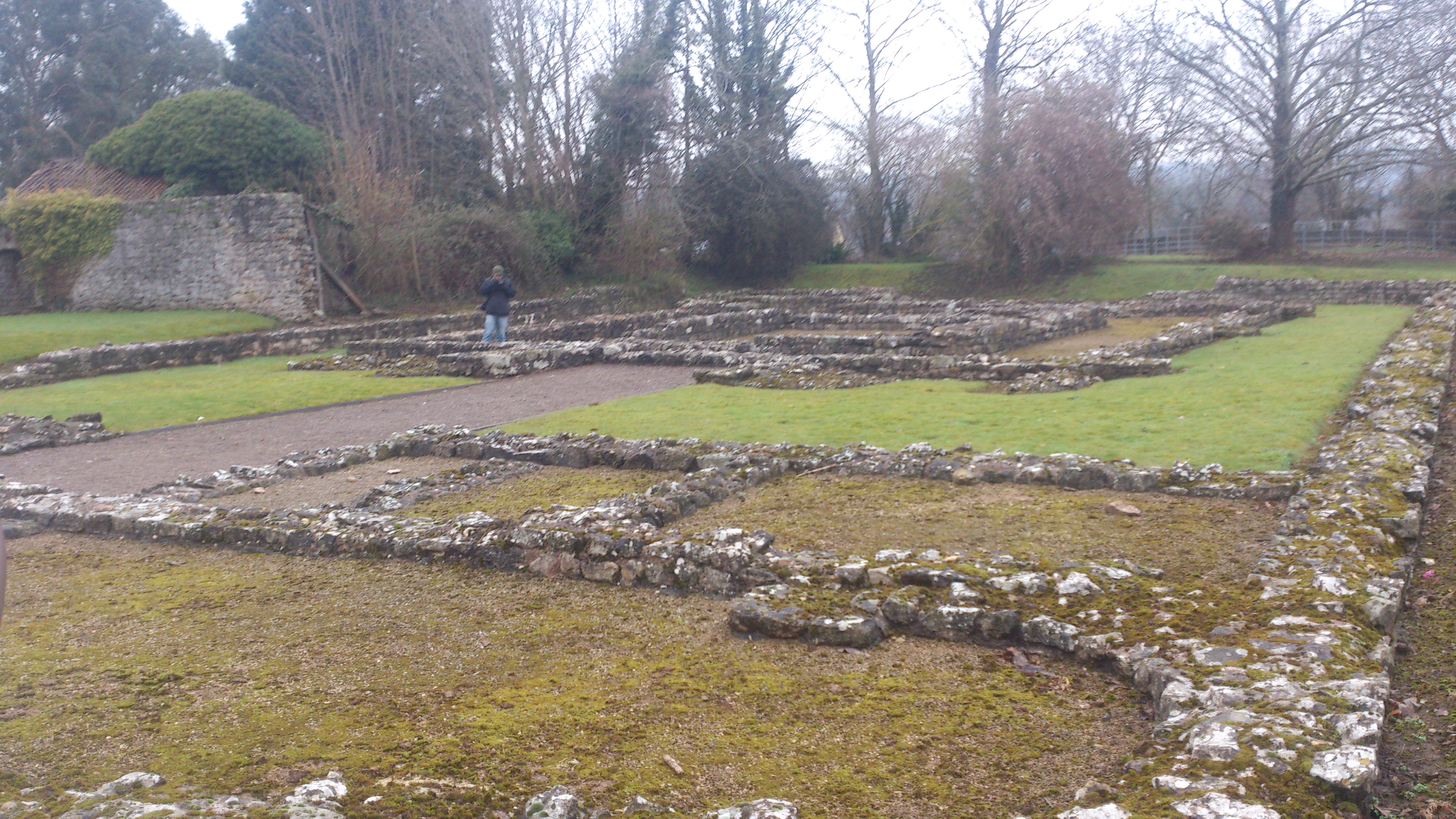 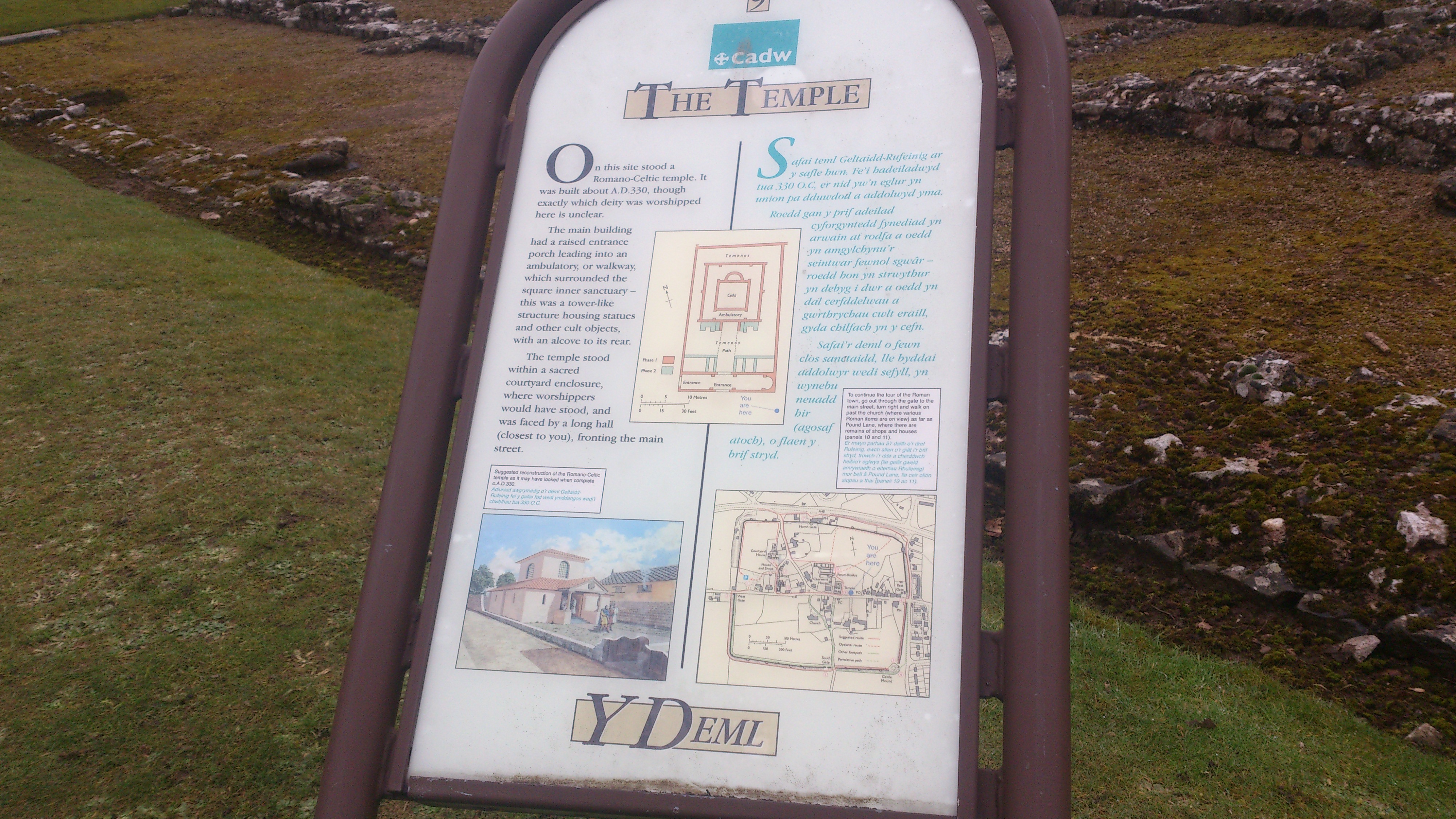 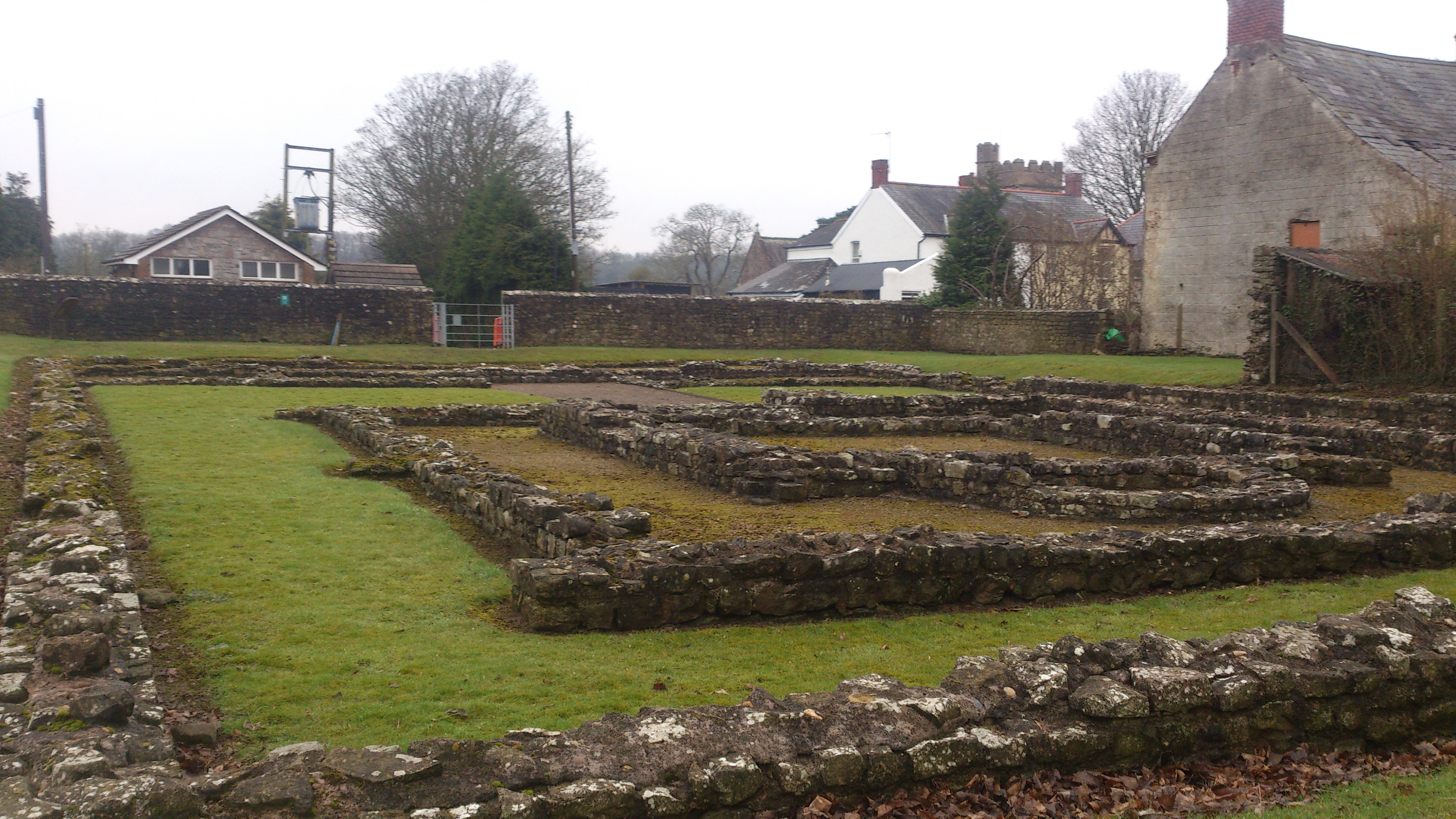 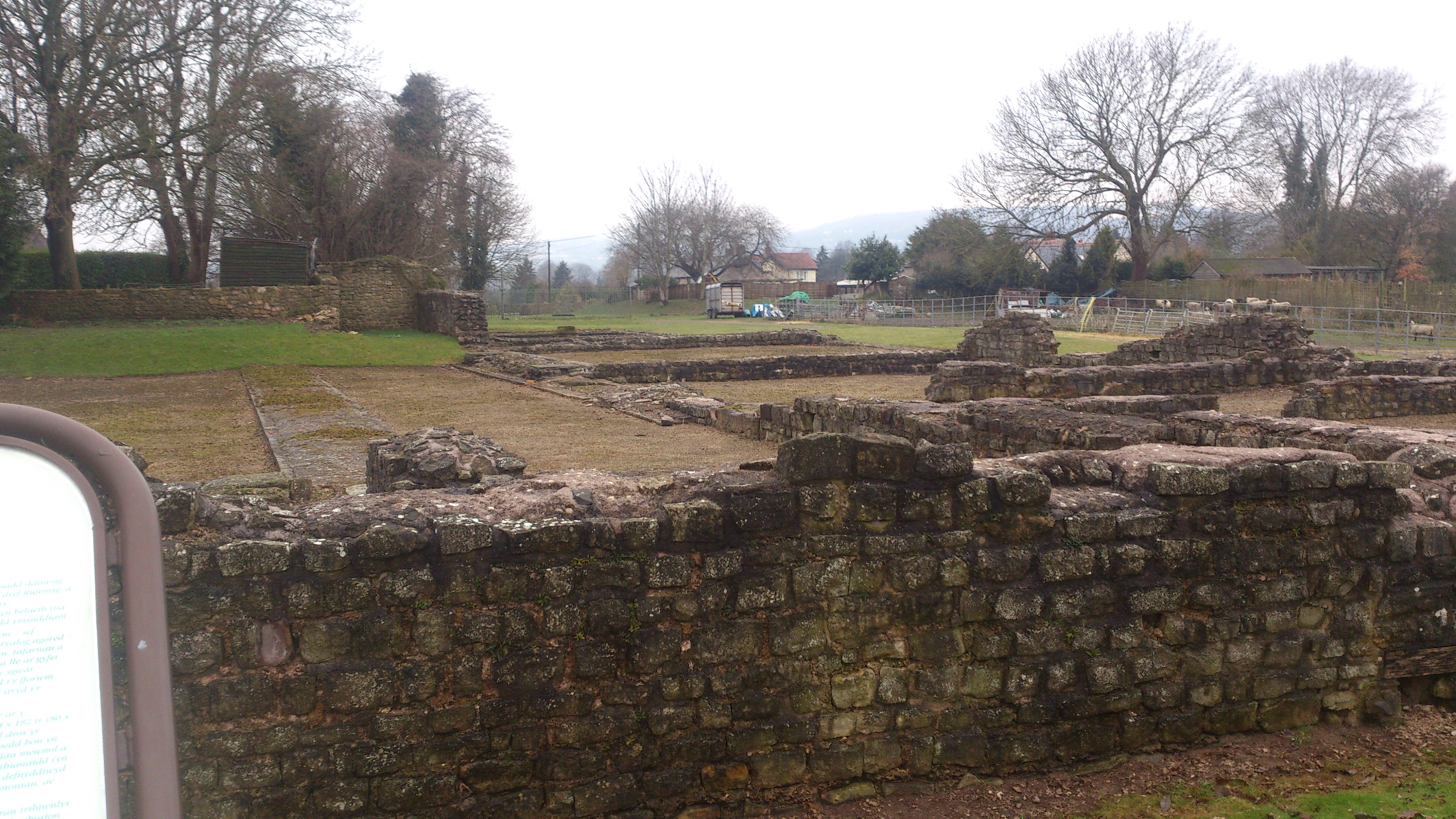 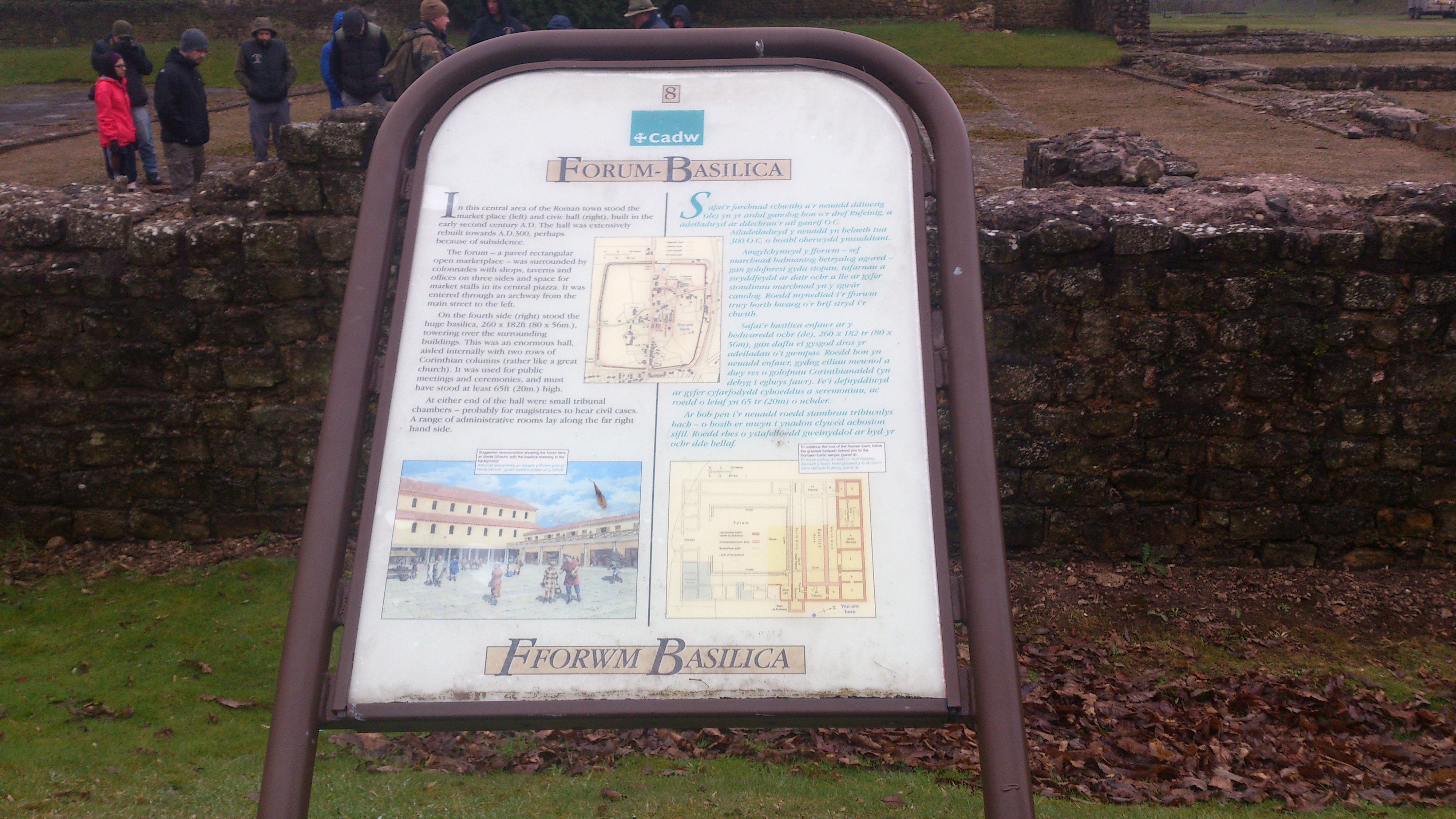 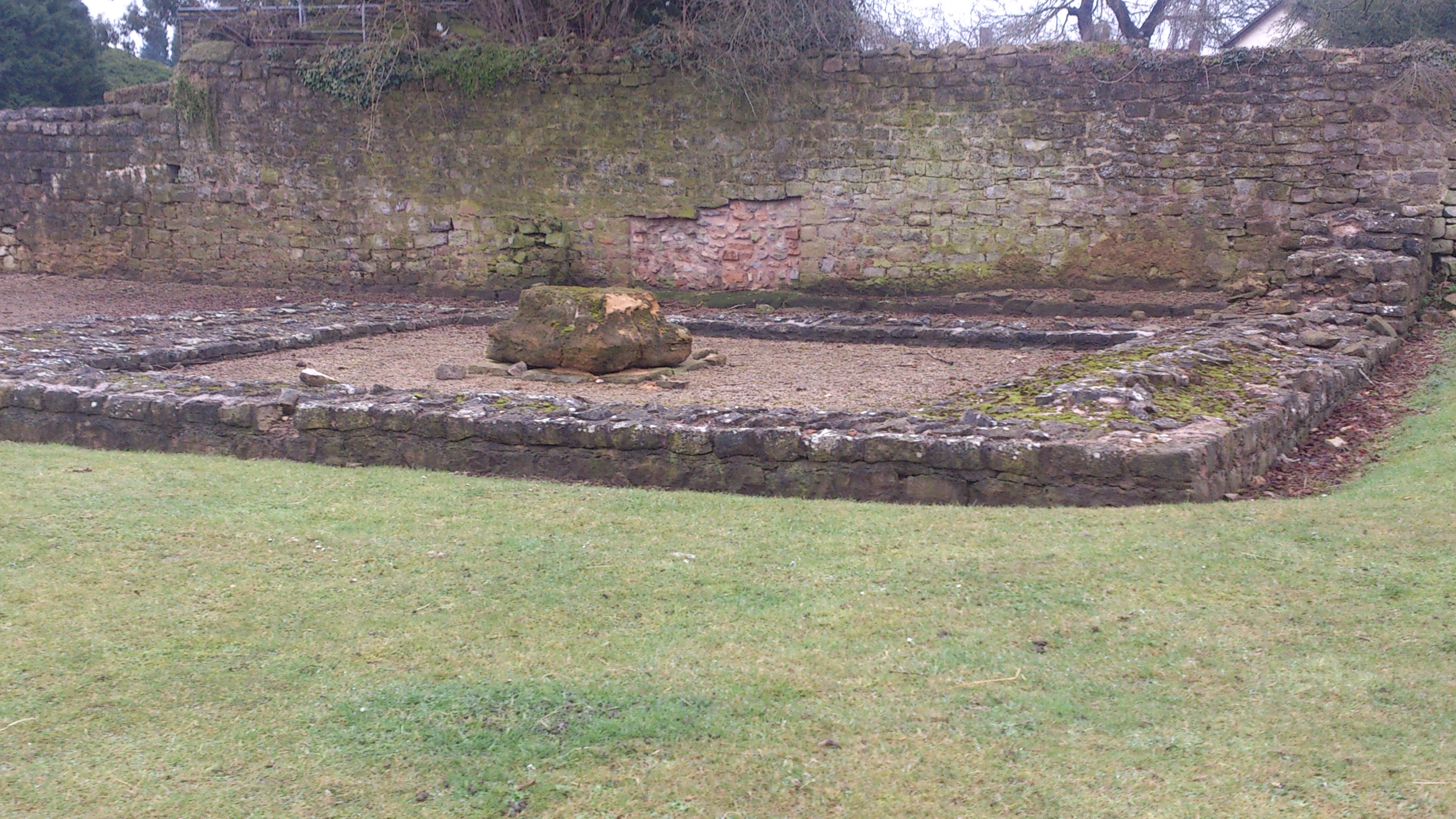 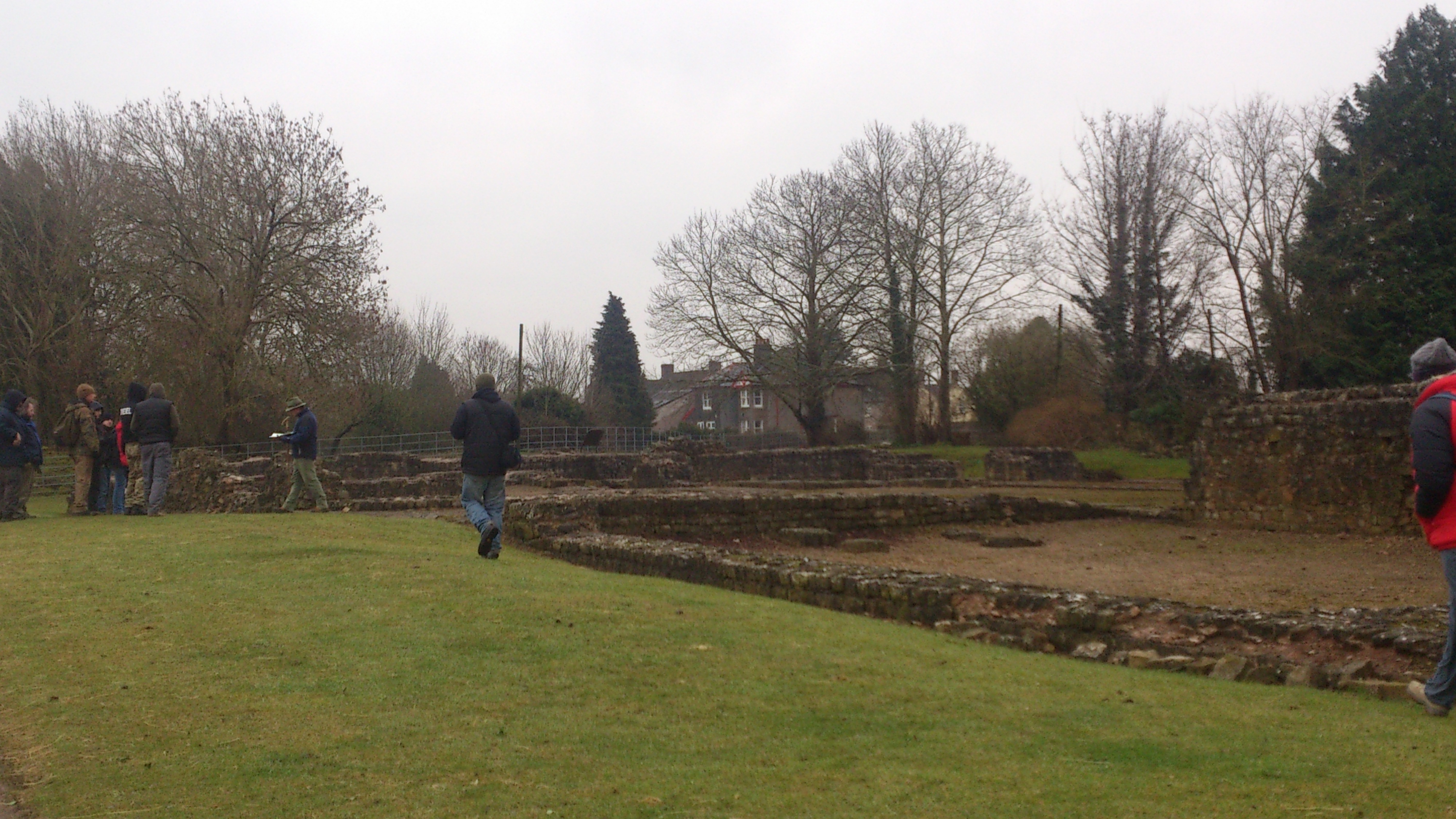 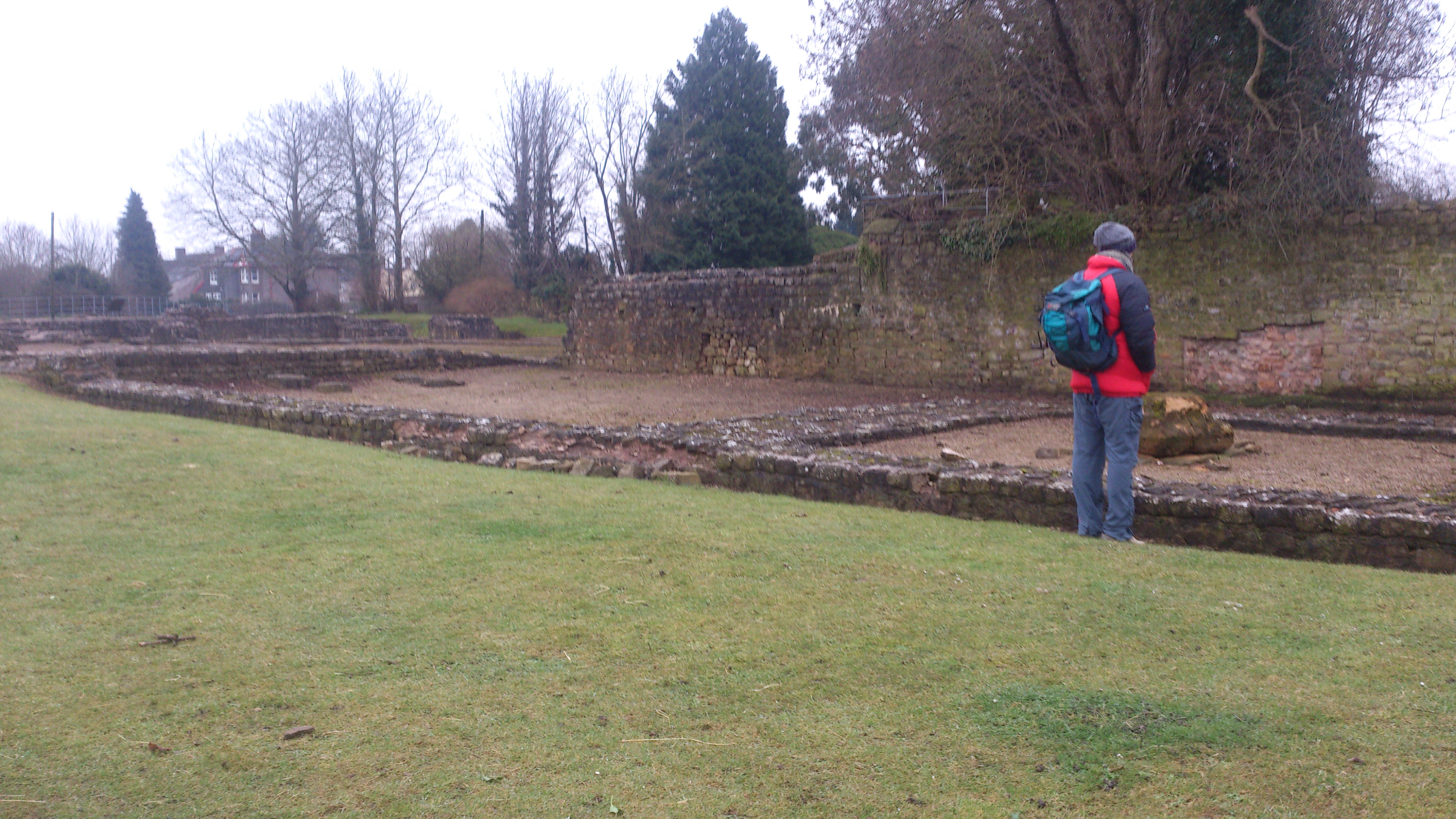 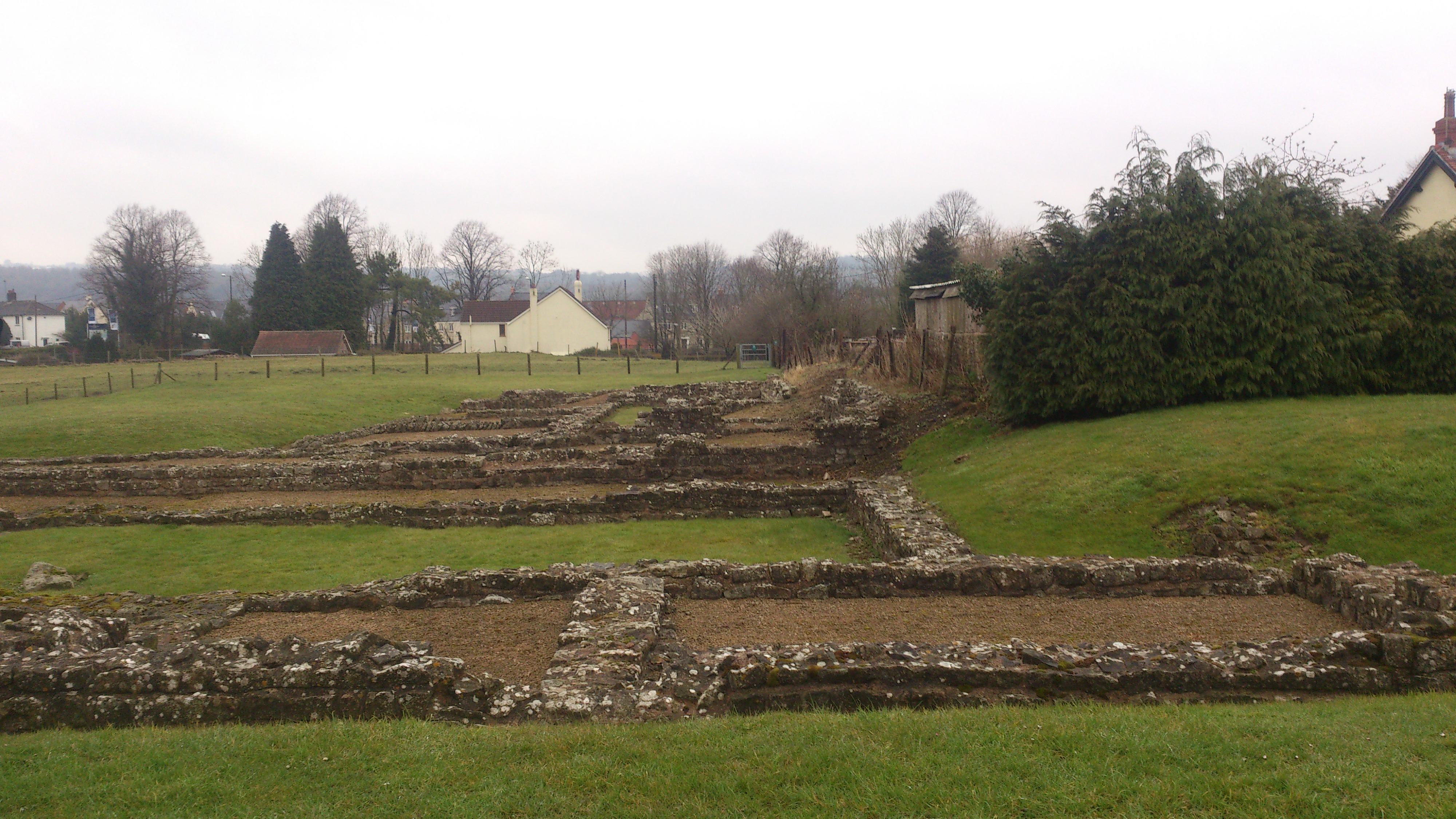 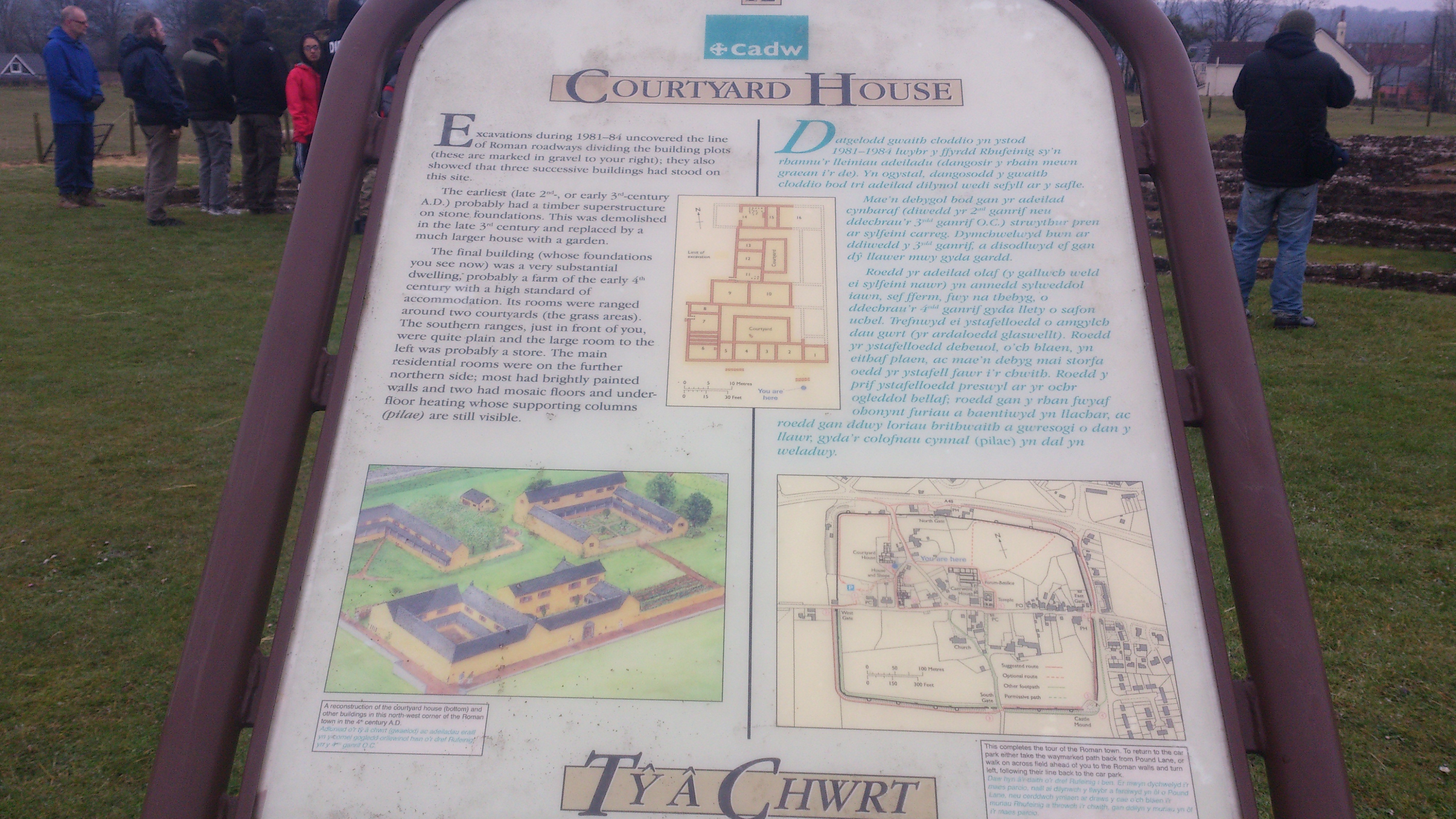 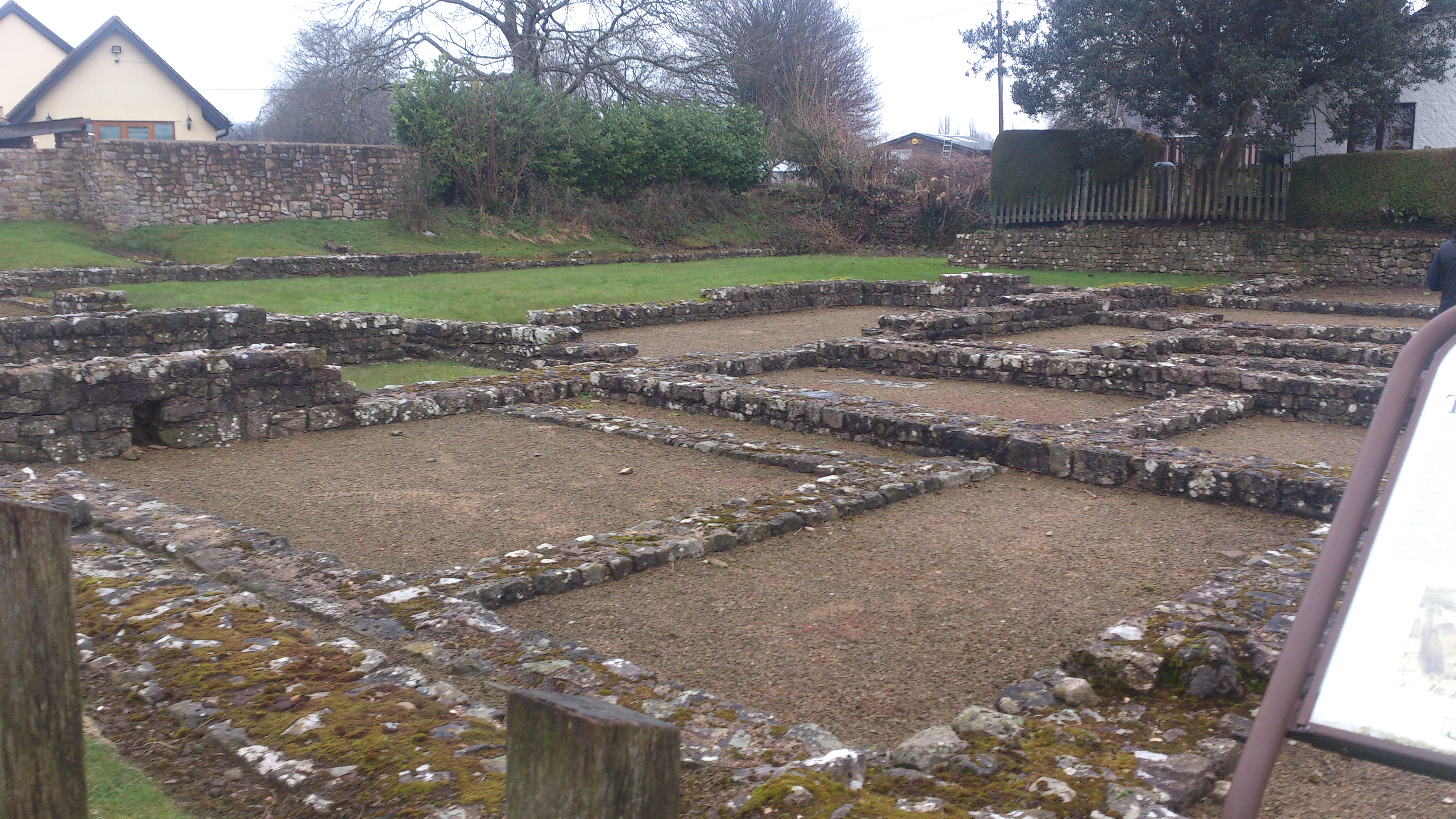 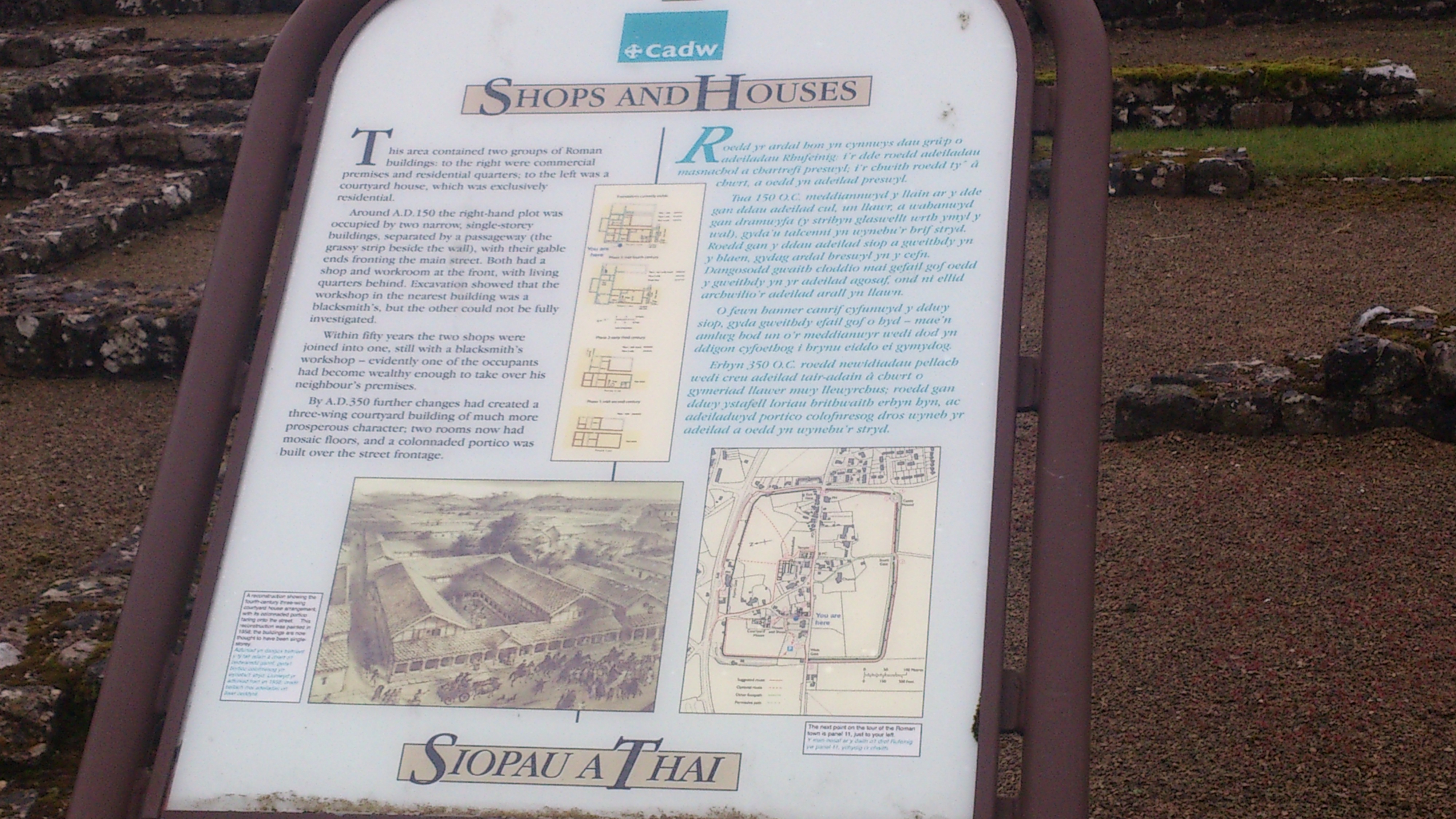 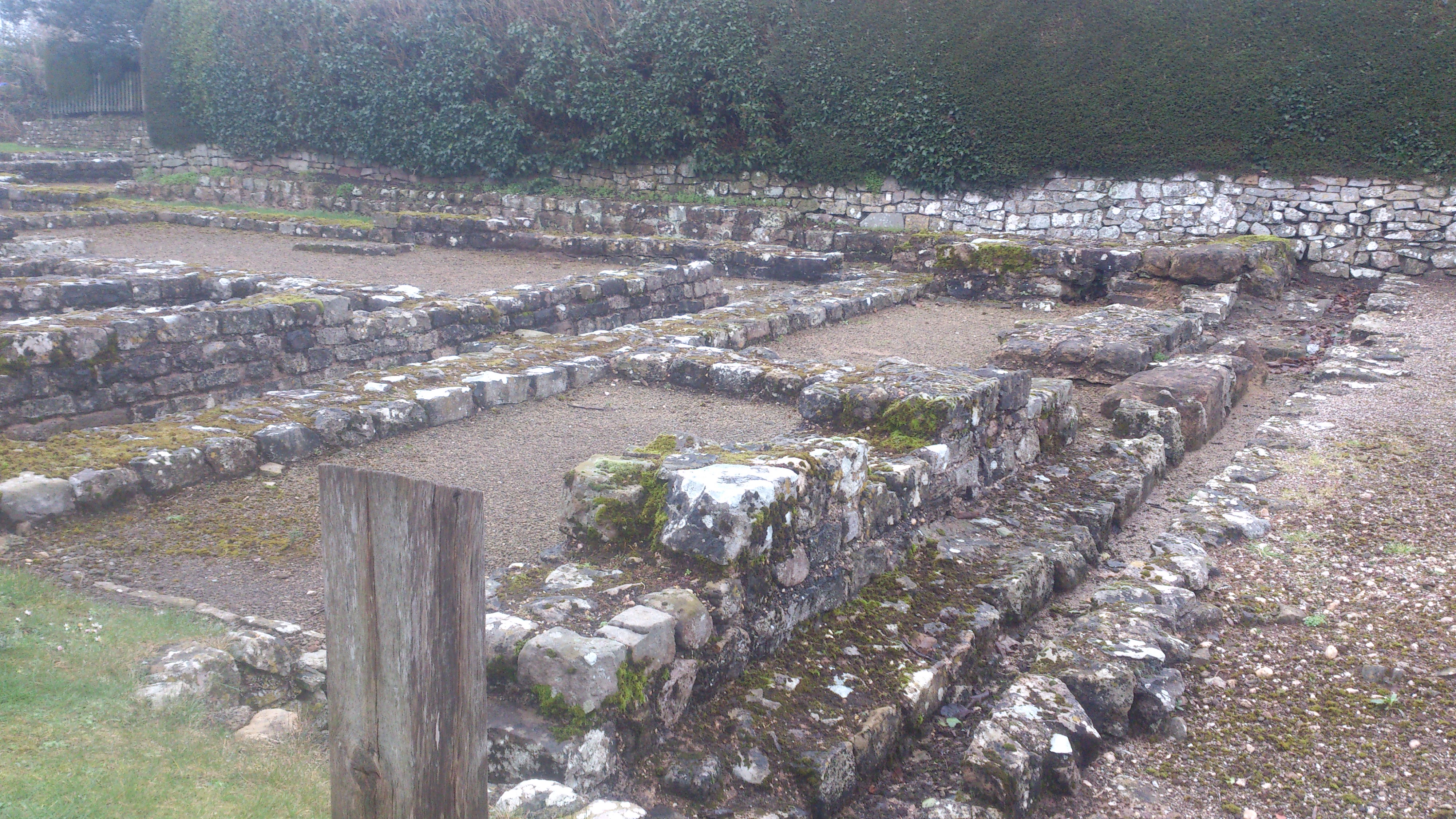 There were other sites including tall walls which were more difficult for me in my manual wheelchair which I did not see. The ground around the sites I did see were grassy and slightly undulating, I did not have my `off road` wheels fitted but with my “Freewheel” and a little help from Kenny, I did manage to get around. With my Power chair I would have had no problem in getting around the sites I visited without help. I hope that by people reading and sharing www.georgepas.co.uk it may encourage people to go and visit the sites, if the people coming to visit the sites increases in numbers I hope that Caerwent village may adapt the areas to and around the sites by putting in pathways, even gravel paths to make it a little easier for the wheelchairs but to be fair, it has not been the driest weather for a long time so the ground is expected to be soggy.

We have successfully fed the staff and students today without the chef, we have had no complaints about the food and so far all seem to be without illness, (a big plus in my books!). This evening I talked to the students about hygiene. We are in hardened accommodation with running water, (all be it cold), but they will be going to sites where they will live in tents and rely on boiled water to wash. I was tasked with teaching them how we as soldiers look after ourselves in the field. The aim of having archaeology students on Op Nightingale is to further their skills and knowledge and for us as soldiers to learn from and with them, so it is a two way street. We can teach them things which we do in the military which will benefit them. I spoke about keeping warm and dry, what footwear to use, the layer system of keeping warm and the consequences of not washing and dressing correctly. With any of the questions that arose answered I then gave them each a present…..a 24 hour ration pack. I talked them through what it was made up of and I got them to tell me when they would eat each item. Was it a meal or a snack? Breakfast, lunch or evening meal? Was it a pudding or another snack? As well as this I told them how they should cook and eat it. With them really showing interest I asked them if they had any questions? There were no questions asked, instead they were carefully looking at items that they had removed from the box and replacing them. So I told them, “Excellent, if there are no questions then, I know that you`ll be fine fending for yourselves for the next 24 hours. That will take us up to when the chef arrives and starts cooking.”

I had the students fill in some forms for me containing some basic details. I then put all of their names in to a table which I have made in to a booking in and out sheet. It is a military training area and to that end I want to know where everyone is. With various other tasks completed I am now ready for some personal admin and in to bed again, it is only a quarter to one in the morning and so I hope to be in bed earlier than last night. Tomorrow, (or later on today), there is a car rally on the area and so safety is going to be a really big thing. I have visitors arriving tomorrow as well and so I need to show them the standing orders and brief them on various things as well as getting them to sign on to the visitors sheet. There is a lot of admin for me to do which is great. It gives me something to get my teeth in to, some different challenges and hopefully some different achievements. I called my Dad today while he was having his surprise get together. He was really happy that it had been done and that everyone was there, my Step Sister made it down from Leighton Buzzard as well, so it was only myself that was unable to be there. I stayed on the phone while my Wife had the cake bought in for my Dad, everyone was singing “Happy Birthday”, and as soon as they had stopped singing my Wife handed the phone to him again. He told me about what the company who he has been driving for did on Friday and the cake they had got him. He said it was a brilliant cake but that the train that we had got him was amazing. I am so glad he liked it and sorry that I could not be there for his 65th Birthday. 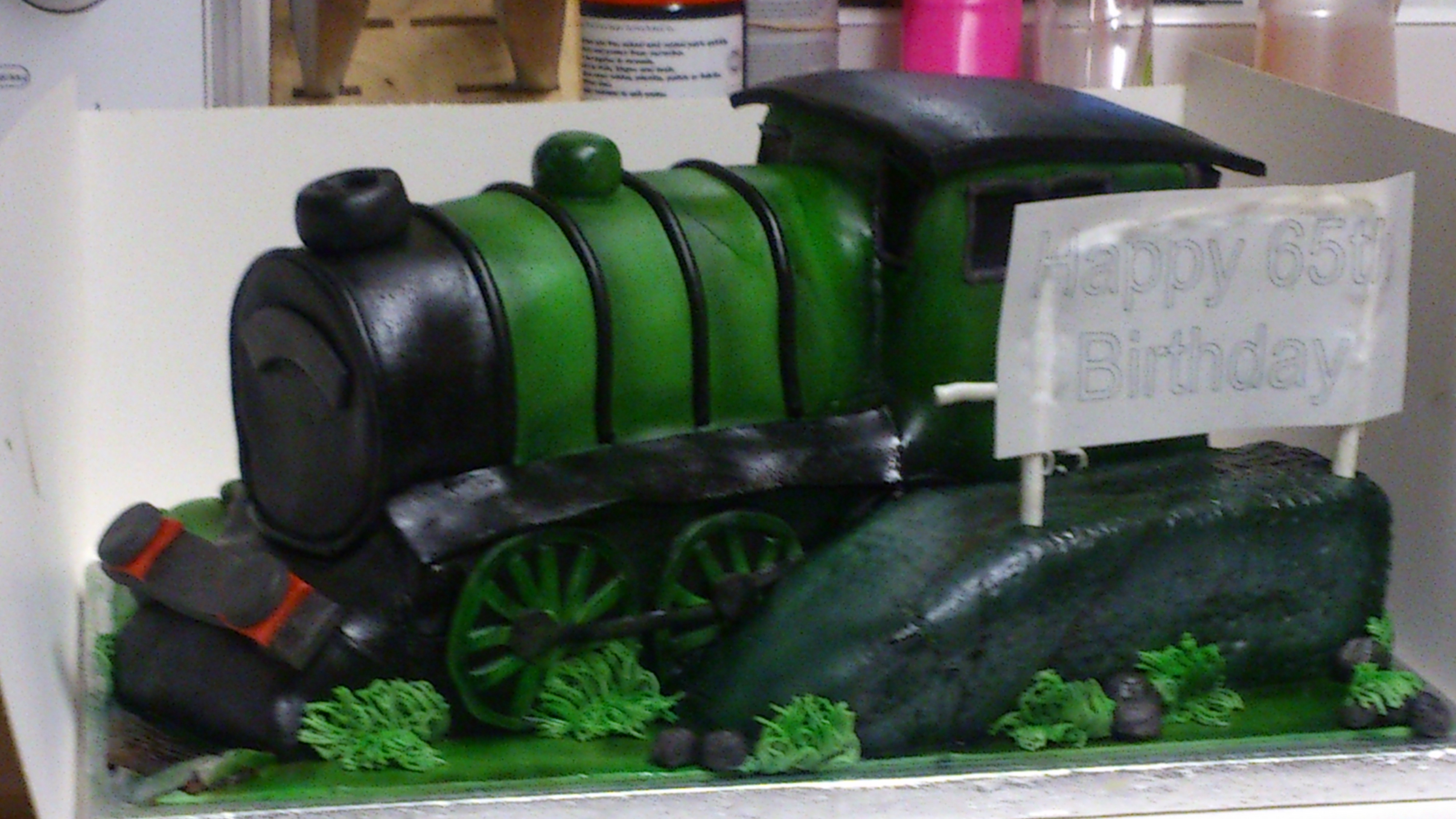