This mornings energizer was a game of volleyball to which eight of us went to. It was a good laugh, not too serious and just enough physically to wake you up for the days activities. Towards the end the residents decided to have a game, a proper game where the winning team would be the first to 15. Fine, a nice way to end the morning but then they said about the `rules`. RULES…REALLY? Well, I looked at the staff lady who was in charge and she looked at me and we both mouthed the word RULES. We never played with rules last week as we didn’t think they were really required. Suddenly this had the potential to be a bit more serious, that will never do, we don’t do serious. So we played with rules and it went well to be fair, some good rallies and some good points were scored but in the end the winners were…..Christ knows as I have forgotten, so that was absolutely worth while for me but at least we had a good wake up session.

Nine o’clock was the daily review where we spoke about the previous days sessions and made our comments on what we thought of them and how they could be improved if indeed that was the case or if they were relevant and then at 09.30 it was off for a session in the gym and on the ski plex. Again I was unable to go on the ski plex and so instead I went in to the gym where JP introduced me to some more apparatus and set me exercises, reps and sets to do. Today I would be working my upper body which I obviously need to do in the hope that I get strong enough to lift my fat ass and body off of the floor and in to my chair. He said to concentrate on the reps and sets rather than the higher weights which I did and felt that I had achieved a good workout when I had finished and was ready to leave the gym. I looked at the rope pull machine that I had enjoyed so much the previous week but refrained from indulging myself and instead thought briefly of other ways I could get the same feeling of enjoyment, one of which came to mind was heating a fire poker until it was glowing red and maybe inserting in to my ear, or possibly hooking my testicles up to the national grid. I obviously refrained from doing either of these things as they would be stupid and incredibly bad for me and decided not to use the rope pull exercise for exactly the same reasons. Happy in my workout and my decision to leave the rope pull exercise, I left the gym and returned to my room for a wash.

If I am honest I had a couple of chats with a few people and sorted a few e mails out before it was time for wheelchair basket ball last thing this afternoon. Although I am one of two wheelchair users who were playing, everyone got in to chairs to play. We had three on each side with the forth being a sub and we would change when someone wanted to come off of the court or after a certain time. This game had rules and referees too but it actually helped. We were all in sports chairs which have only just been delivered and put together last week which bought back memories of sports afternoon at Stoke Mandeville. I really worked hard and got up quite a sweat but not as much of a sweat as when it came to transferring back in to my chair. I had gone in to the sports chair from mine really easily and I was quite chuffed but I struggled going the other way for some reason, and then my spasms started too which did not help but with the assistance of Ian, Rob and another of the staff we got me in to my chair once again. A fantastic afternoon game which was not only hard work and enjoyable but a bloody good laugh.

There is not much else to tell you really but I want to tell you of an anniversary, a ten year anniversary in fact. Ten years ago today, this morning in fact at around half ten I believe, I was on my first operational tour. The tour was in Kabul in Afghanistan and we were there as part of the International Security Assistance Force (ISAF) attached to the 2nd Royal Gurkha Regiment. Our Battalion was called the Rifle Volunteers and we were made up of The Light Infantry (LI), The Royal Gloucester Berkshire and Wiltshire regiment (RGBW) and the Devon and Dorset regiment (D&D). We had all volunteered to go and serve on the tour as that is what we had trained to do. I was part of what we call RED ONE, you are on immediate notice to move if there is a problem or you are required to do so. On this morning ten years ago there was an explosion the likes of which I had never heard in my life, it shook the building we were in to the point we thought it was in the camp. We sprung up and were on our vehicles before the runner had even got to our building to tell us we needed to go. We were advised that we had to wait for an ambulance but we had two extremely capable medics with us and did not want to waste time, it would be at least ten minutes before the ambulance would be ready and we were not prepared to wait. We raced off to the location which we had been told of with the weapons made ready, and we got to the location in minutes few. Nothing could have prepared us for what we saw. A suicide bomber had driven next to the convoy of military vehicles and detonated sending the engine of the car some 200 meters forward. It had tipped a vehicle over and the devastation was incredible. One of the vehicles that was destroyed was a British Army Land Rover, one of ours, with our guys in it. One of the guys was being tended to by their team medic, a good medic who had not recognised his own injuries and had tended to the wounded in the vehicle. We took the injured guy he was working on and whilst speeding to the main medical centre a short distance away, our two medics were working frantically in the back of the open top Land Rover to save his life. Despite their best efforts and the efforts of the medics at the camp, Pte Jonathon `Kit` Kitulagoda became the first British Soldier to be killed in  the Afghanistan conflict. A 23 year old university graduate whose smile was rarely missing. A good looking, intelligent guy who was respected by all who knew him, who had volunteered to serve to help those people in a land we would come to lose so many more lives in and taken in the most cowardly way from his family and friends. Please if you can, spare a thought for him on this day, as those of us who were on the tour and those who knew him have done today. The medic I told you of who had not recognised his own injuries but instead had taken care of the others in the vehicle, what injury had he not recognised? Amongst other less serious injuries he had sustained, he had lost his eye. 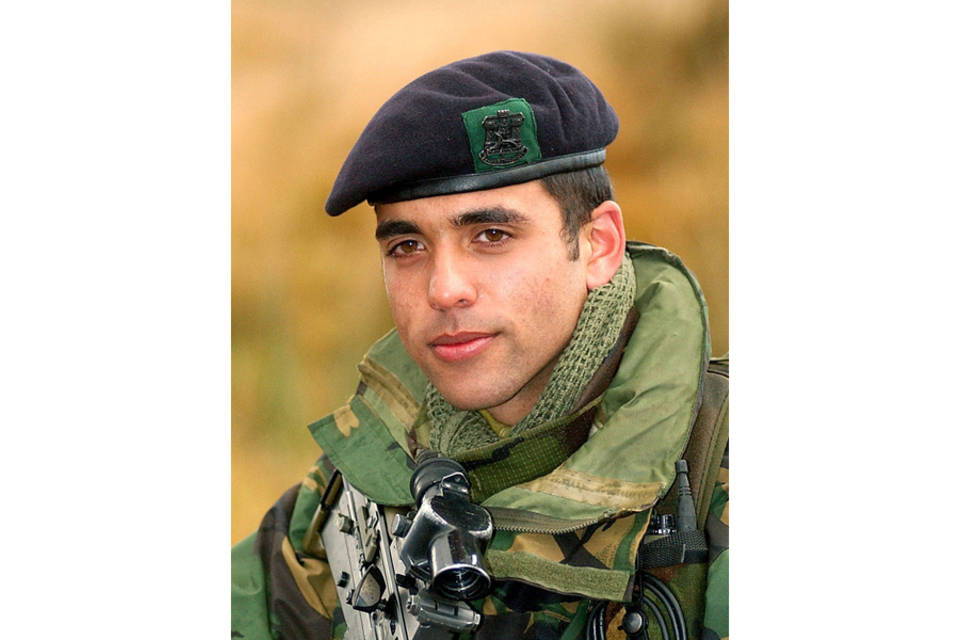