I was woken this morning by `Pickle`, she came in to my room and was excitedly telling me about the snow which was outside. She was only a little over a year old when she was last able to play in the snow which was the first time she had experienced it. 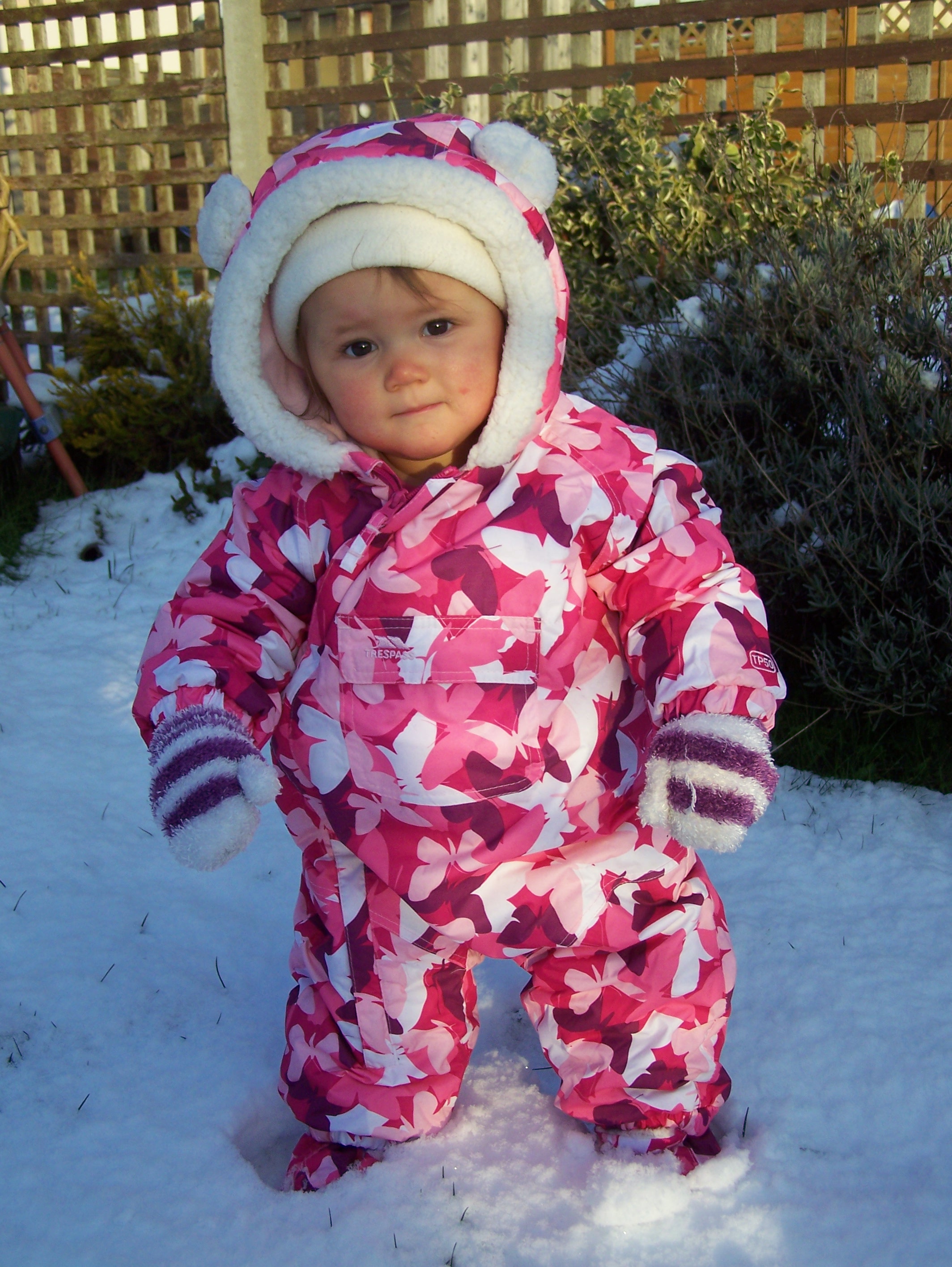 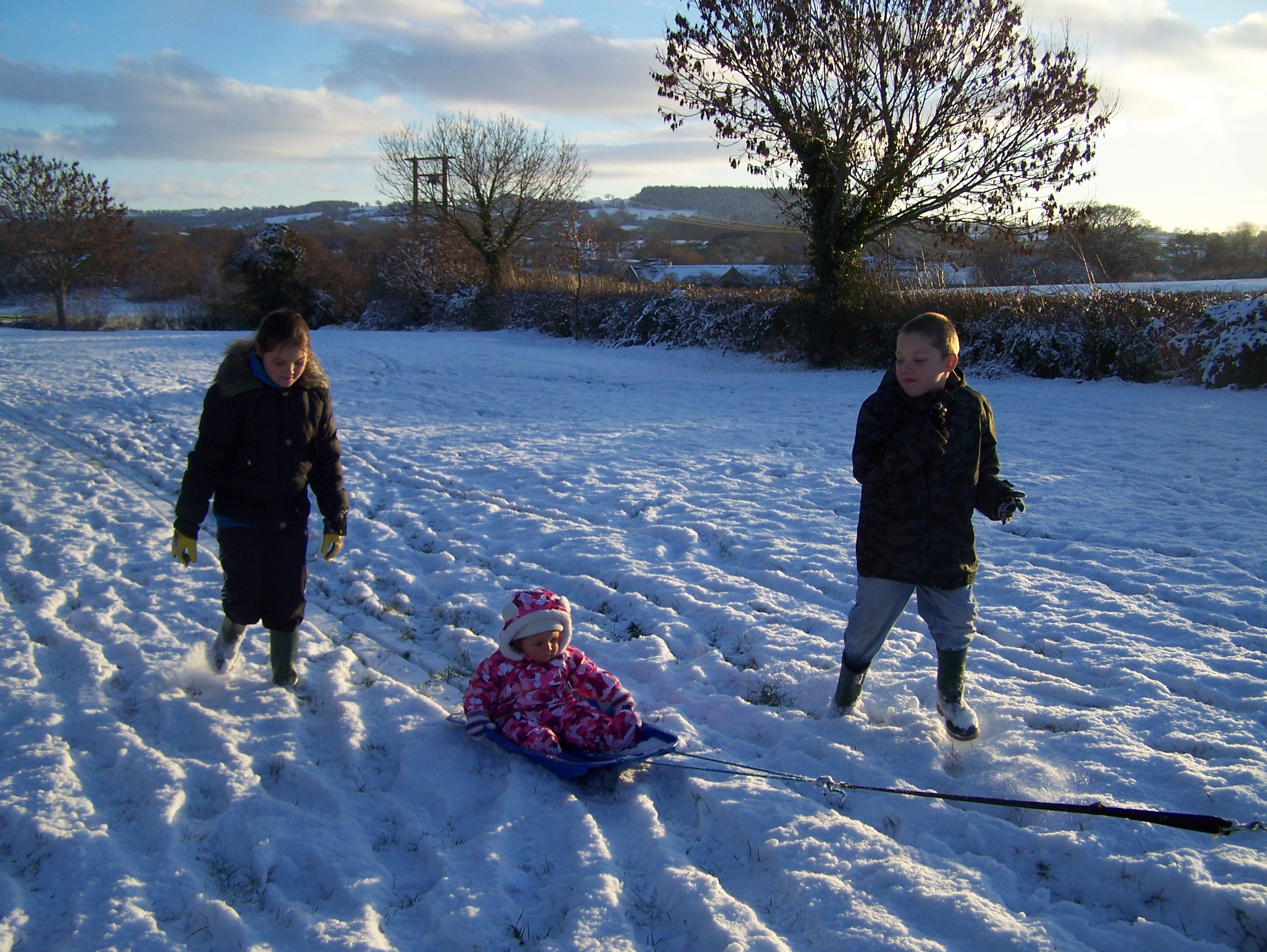 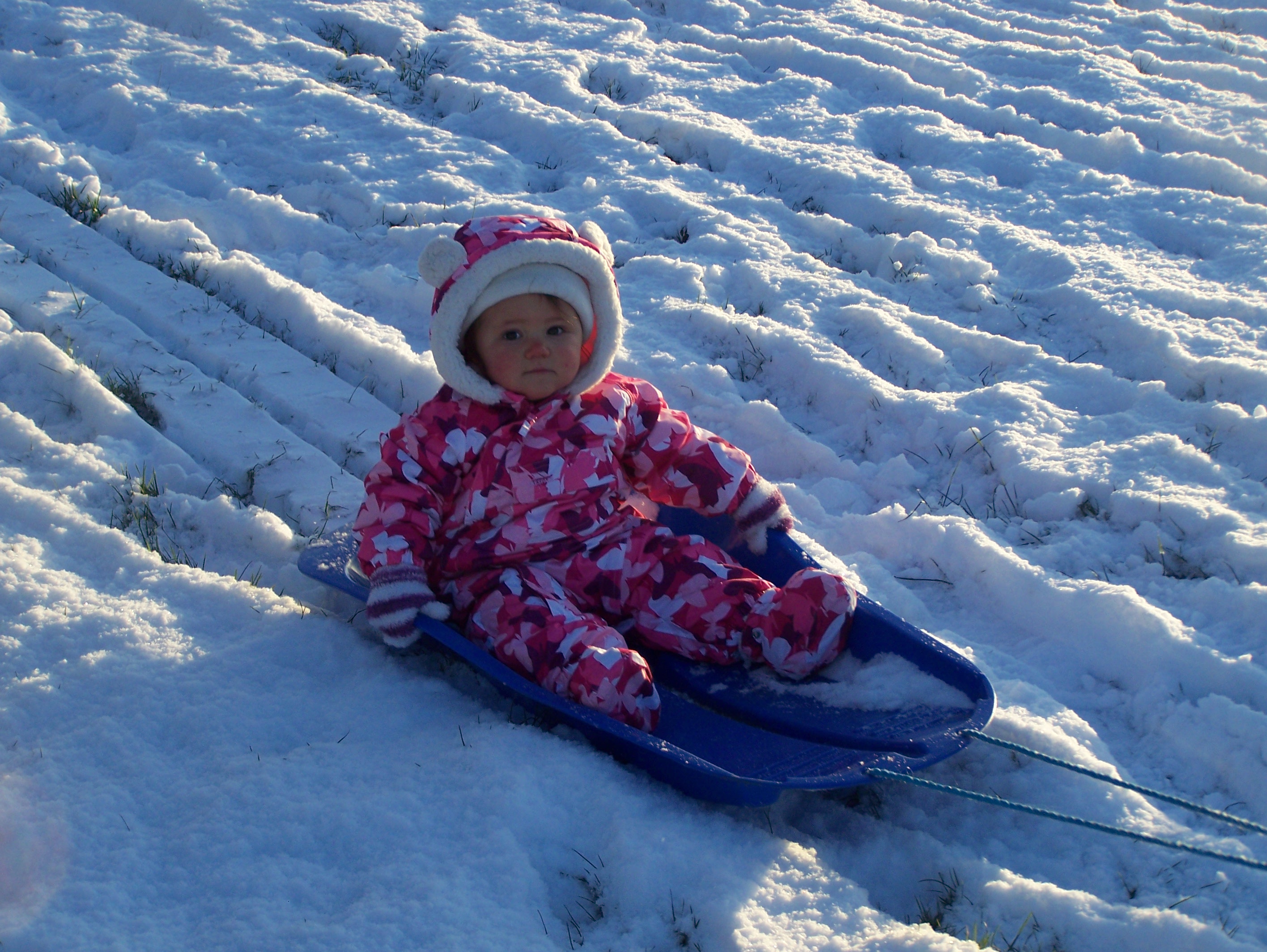 Today though she was well aware of what was falling and what was on the floor outside, she was telling me to get up and get dressed as we were going to build a snowman, it was lovely to hear her little voice so excited at the very thought of playing in the snow. 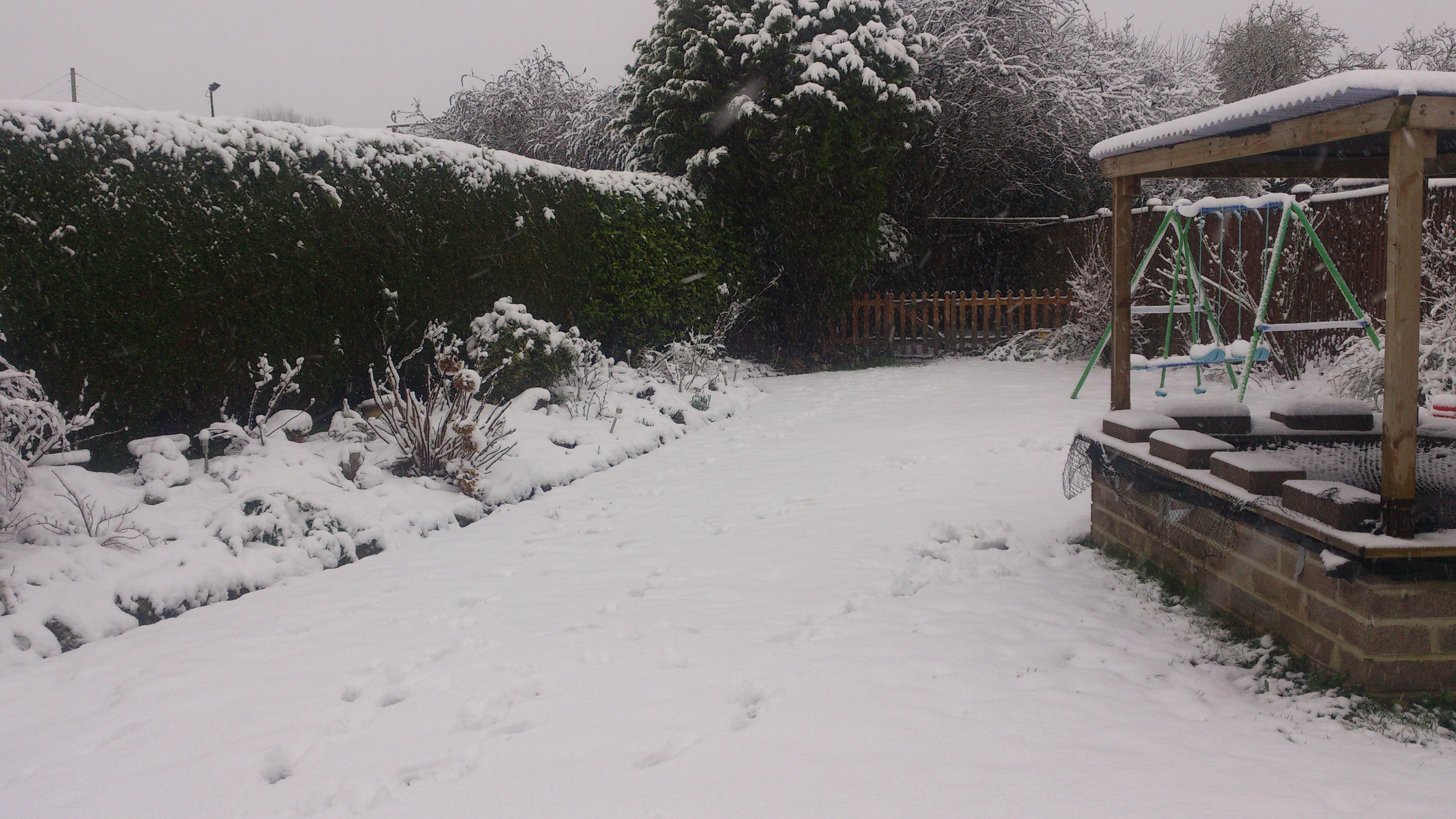 I called Maralyn as I did not want her driving over for my acupuncture treatment and risk an accident, I had beaten her to the call as she was about to call me to cancel, I would much rather postpone the treatment than her drive over in the snow. I got dressed and in to my manual chair, Darren and the girls came over and we went for a walk, unfortunately though my wheelchair needed pushing as I could not propel myself through the depth of the snow. We had kept our kids from school today as my Wife is not comfortable driving in the snow, it is what I used to do but obviously now I am unable to. We struggled to find out which schools were closed but were hearing almost all of the bus companies had cancelled their school runs, to that end we did not want to get the kids to school and then be told to collect them after a couple of hours, not that I had anyone who could take them anyway. So to that end, we all went out for the walk. 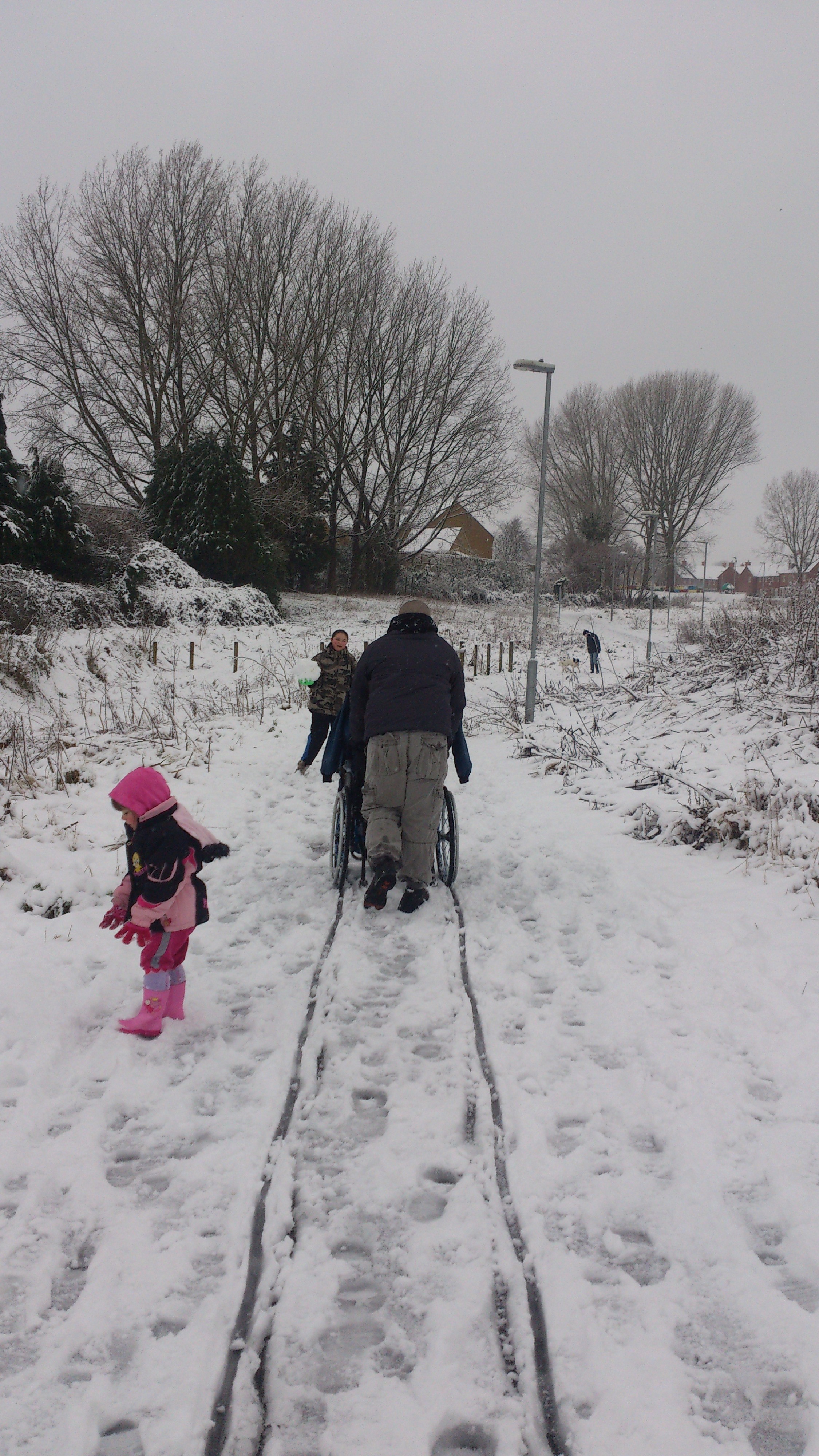 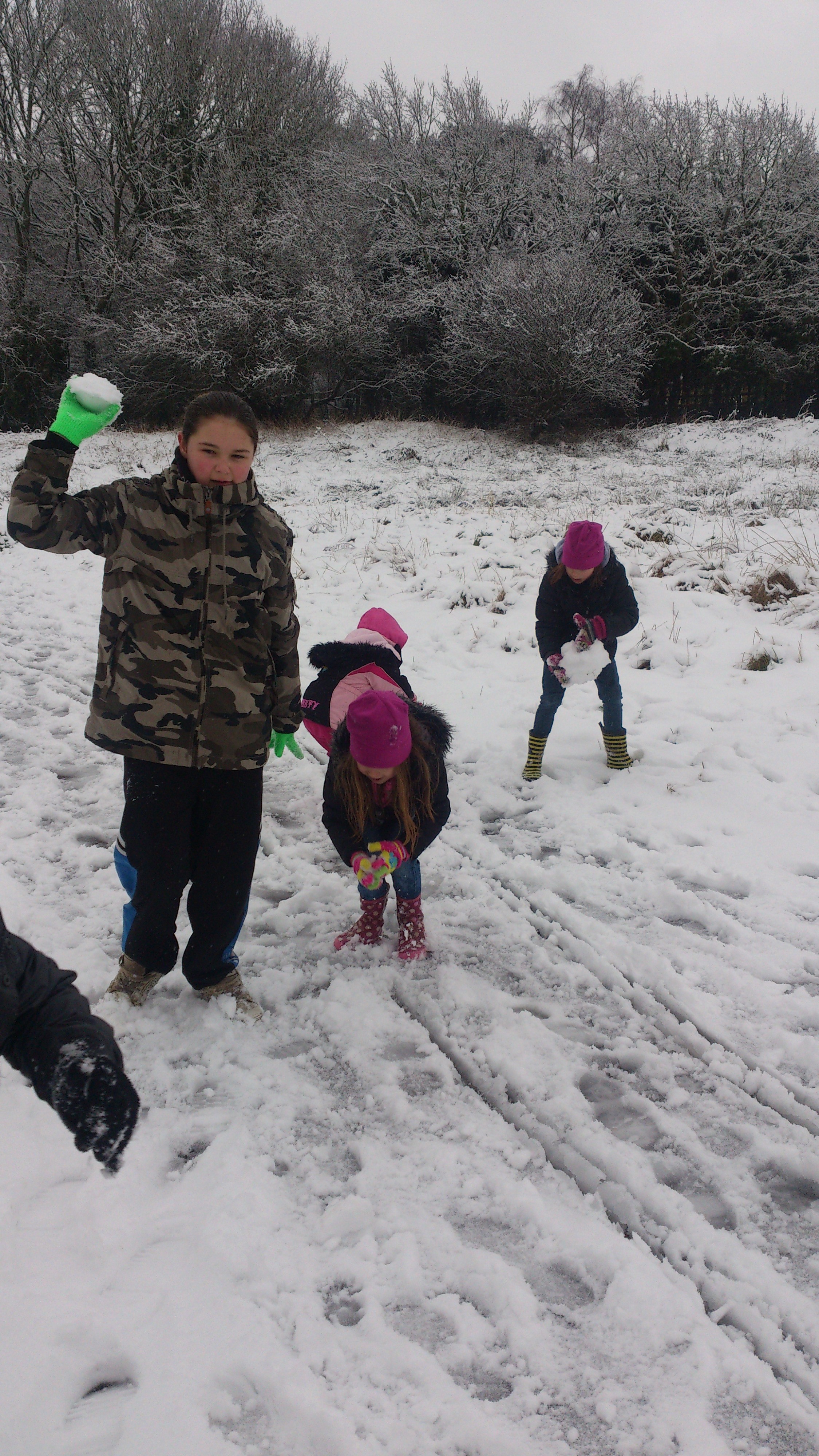 As the snow was still falling I put my poncho on and as I could not move under my own steam I pulled my arms in under the poncho and put them under the blanket I had wrapped over my legs. Seriously, I felt like an old man, but my legs get so cold, even though I can not feel how cold they are, I thought it best to cover them up. 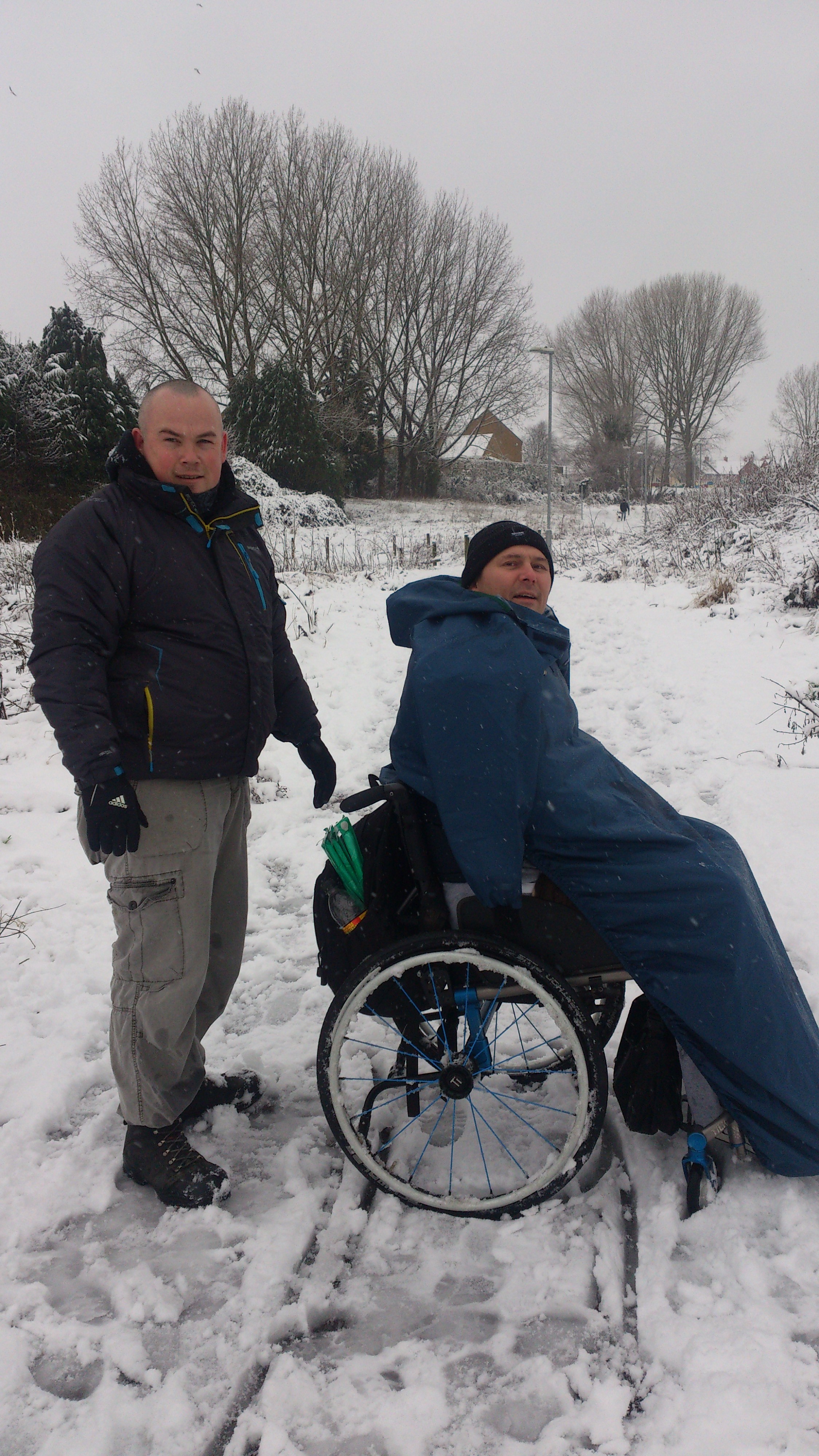 The snow balls were flying about and it was not long before I was being used as a shield, something to hide behind to avoid getting a lump of snow in the grid. 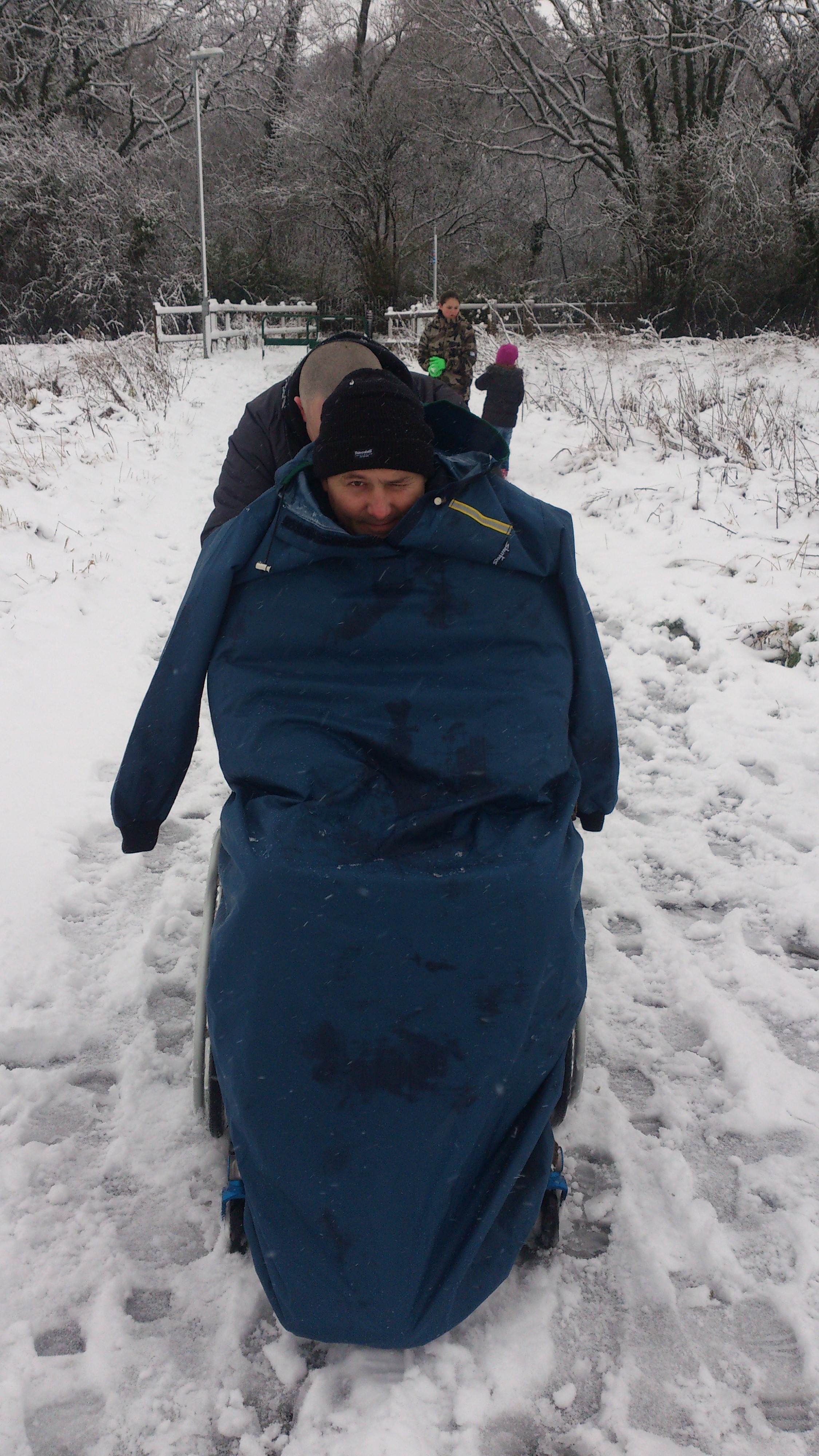 I had a plan to overcome the risk of an iminent attack from the youngsters though, if I pull my hood over my face it creates a completely sealed from the elements mobile home! 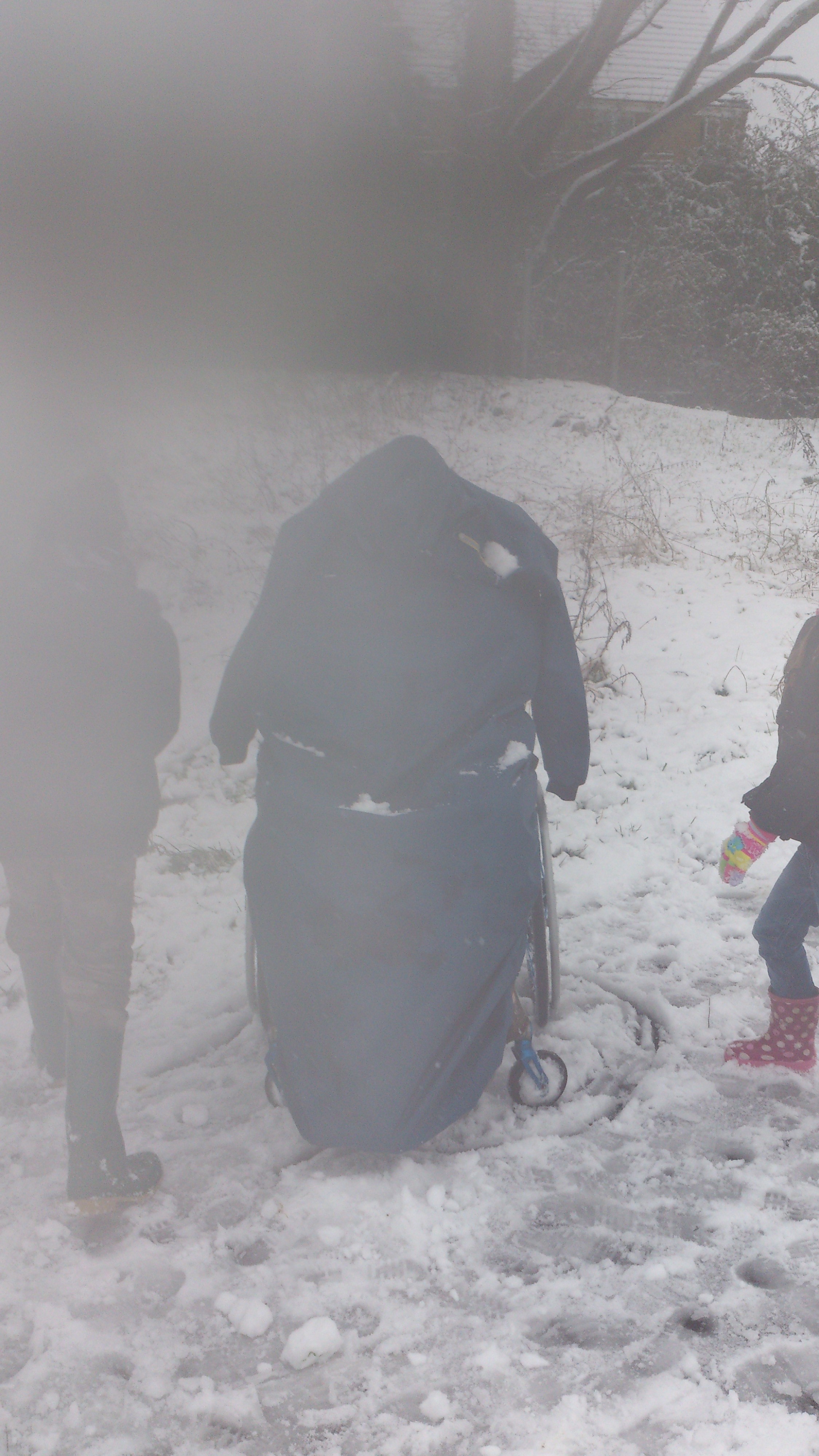 Needless to say that when I locked down the snowballs rained down making Darren run which left me, cosy, quite warm and free from snow despite the amount that hit me until the kids got bored and again targeted Darren.

It took quite a while for our little walk but as the kids hands were getting cold from the wet gloves after the snowball fights, we headed back to the bungalow. To make it easier we went back on the pavements on the main road. It was not very long before the only real option we had was to push me on the road as there was more grip. Cars were being very understanding and were straddling the centre white line, giving us plenty of room and more importantly keeping their wheels on the clear parts of the road and not in the slush. Even the lorries were doing it and if a vehicle was coming the other way, vehicles would wait and then go around us in the same manner. This was really good to see that the drivers could understand why we were on the road and ensuring that they not only gave us room but made every effort not to spray us with slush. Except for ONE vehicle. This vehicle was in a line of traffic, EVERY other vehicle straddled the centre line and kept their wheels on the clear road, but this vehicle, a home delivery van for ASDA did not follow ALL of the other vehicles in the line and instead drove through the slush and sprayed myself and Darren. I was lucky as I was covered by a poncho and therefore only the lower half of my legs got some at the backs where they are not covered. Darren however got covered. I was unable to get the registration of the vehicle but I don’t imagine that there would be more than one ASDA delivery vehicle on the main road out of Chard towards Hornsbury Mill next to Oscar Mayer Foods at around eleven thirty/quarter to twelve this morning. I have not called to complain but I think an e mail to ASDA will happen as it was not an accident, the driver deliberately did not follow the other vehicles who were avoiding the sludge. I appreciate that roads are for vehicles but it was not going well on the pavement and as the roads were quiet in comparison to normal, it was the necessary thing to do.

We arrived home to the bungalow, went in, got out of the boots, gloves and coats and sat down for a nice hot drink and some lunch. No sooner had lunch been finished and the kids, Darren and Wifey were dressed up again and out in the garden building a snowman. 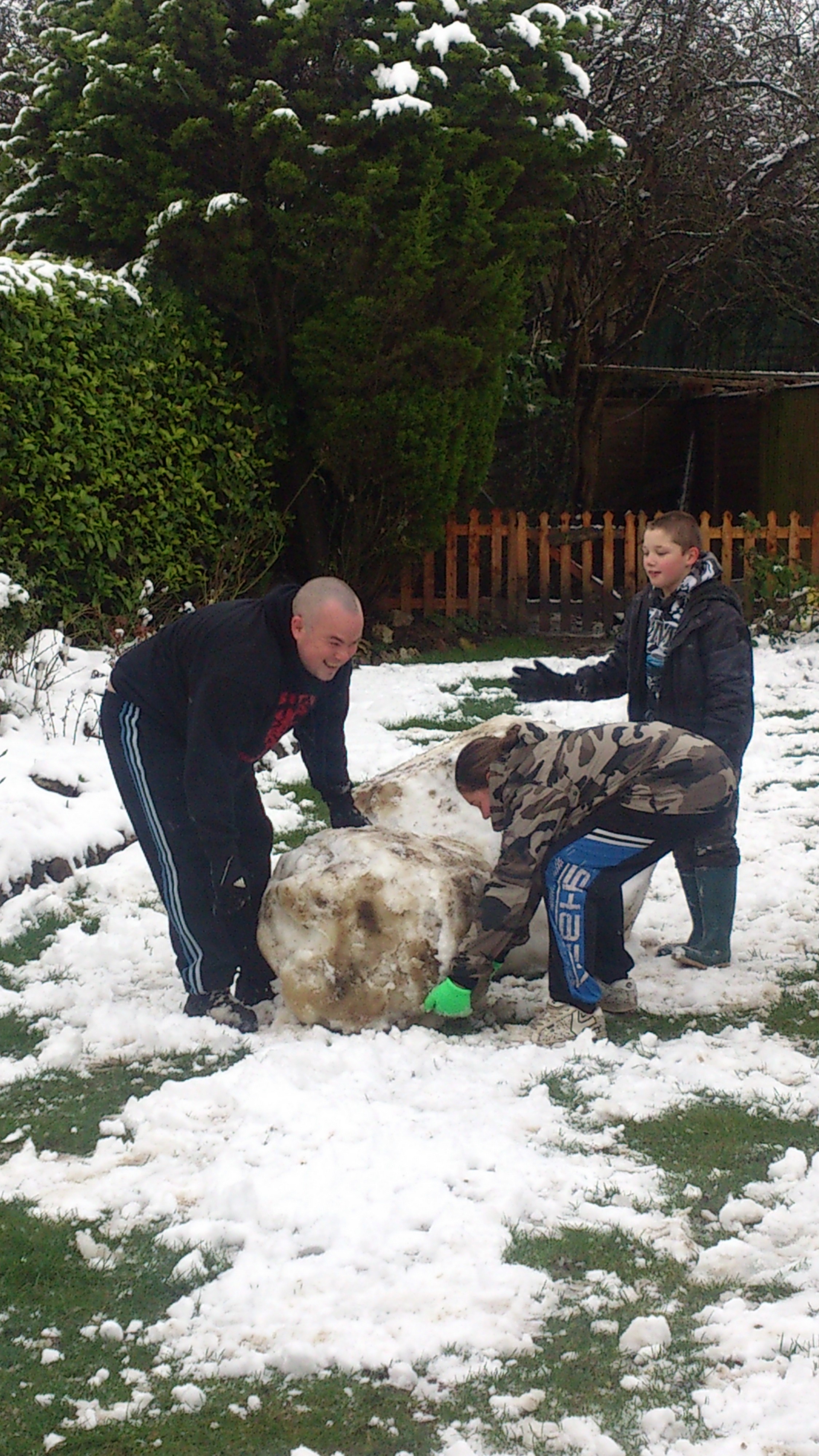 I could not get around in the garden if I wanted to and my physio had called to say that she was unable to make it today due to the snow so I stayed inside drinking more hot drinks and watching the television.  Eventually though, everyone came in to warm up again pleased with what they had made. 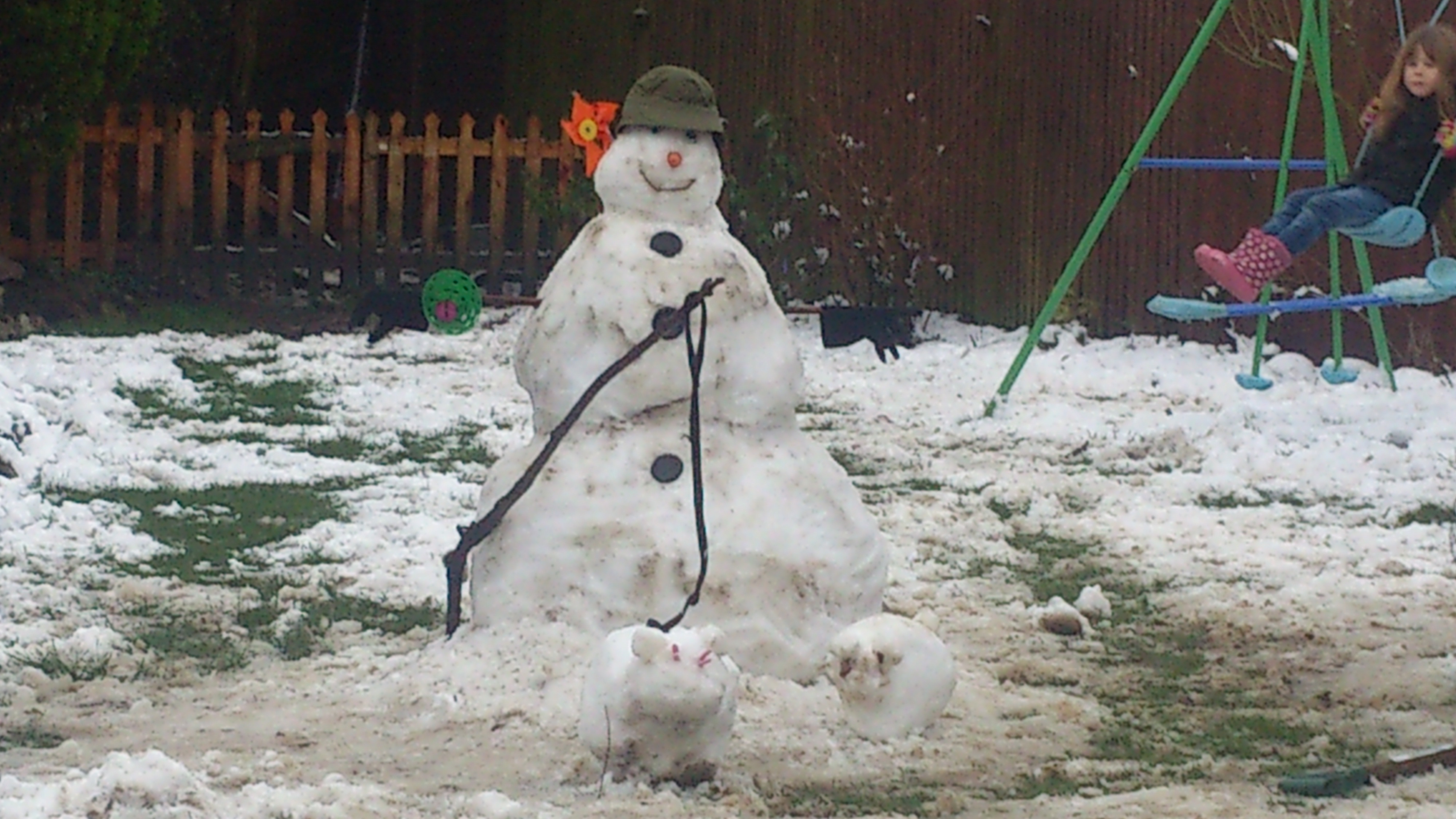 A nice end to the week, the snow should be gone by tomorrow due to expected rain but we shall see what it looks like when we look outside in the morning. For now though, Season 10 of NCIS!