Wednesday I had a large brown envelope arrive in the post as well as a couple of parcels which I had been waiting for. The brown envelope was the paperwork I had been waiting for to re apply for the disability award in the hope it would be extended so I could re apply for the Motability scheme, this would be something I would turn my attention to later on in the day with the the intention of sending it back the next day. I had to wrap one of the parcels after I had checked it so that I could ensure that was sent as it was a Christmas present for a friend, it would have to go first class recorded to give the best chance possible of arriving before Christmas and so the wrapping needed to be done immediately. This done, I managed to get it out the same day, so now it is just down to good old Royal Mail. I had my massage on my legs, last one of the year, had a good chat with Paula while she was doing the massage, spoke about Christmas, massage and some fundraising that she hopes to do which was interesting, ultimately the time ran out and she left until hopefully some time over the Christmas period for a drink and if not it would be in the new year.

I stayed up late last night sorting through all of the paperwork that I had been meaning to do for some time, filing the stuff we needed to keep and shredding the stuff we did not. This took a lot longer than I had anticipated and I still had forms to fill out and a couple of other bits to do before I was willing to go to bed. I filled the form in and located some dates that I needed from appointments I had been to by looking back through the diary. I then had to locate some reports that had been done with regards to my injuries to copy and send off as part of this re application for my award. This all took quite a bit of time, but I did get all of the information together and put it all ready to copy and send off. I sorted out the rest of the paperwork and eventually got in to bed at around two thirty this morning.

I woke around seven this morning but dropped right back off to sleep until I eventually woke and got dressed at around ten. I stay up late as I can’t sleep but then I am tired in the morning, hard to get it right at the moment, but I hope for this to be another thing I get sorted in the not too distant future. Today was going to be an exciting day, I was looking forward to my Physio coming round this afternoon. I always look forward to her visits because I always feel that I have accomplished something when the time is up, as well as this we have a bit of a laugh which I think always helps. So why would I be excited about today more than any other Physio sessions? Well remember that we had a delivery? 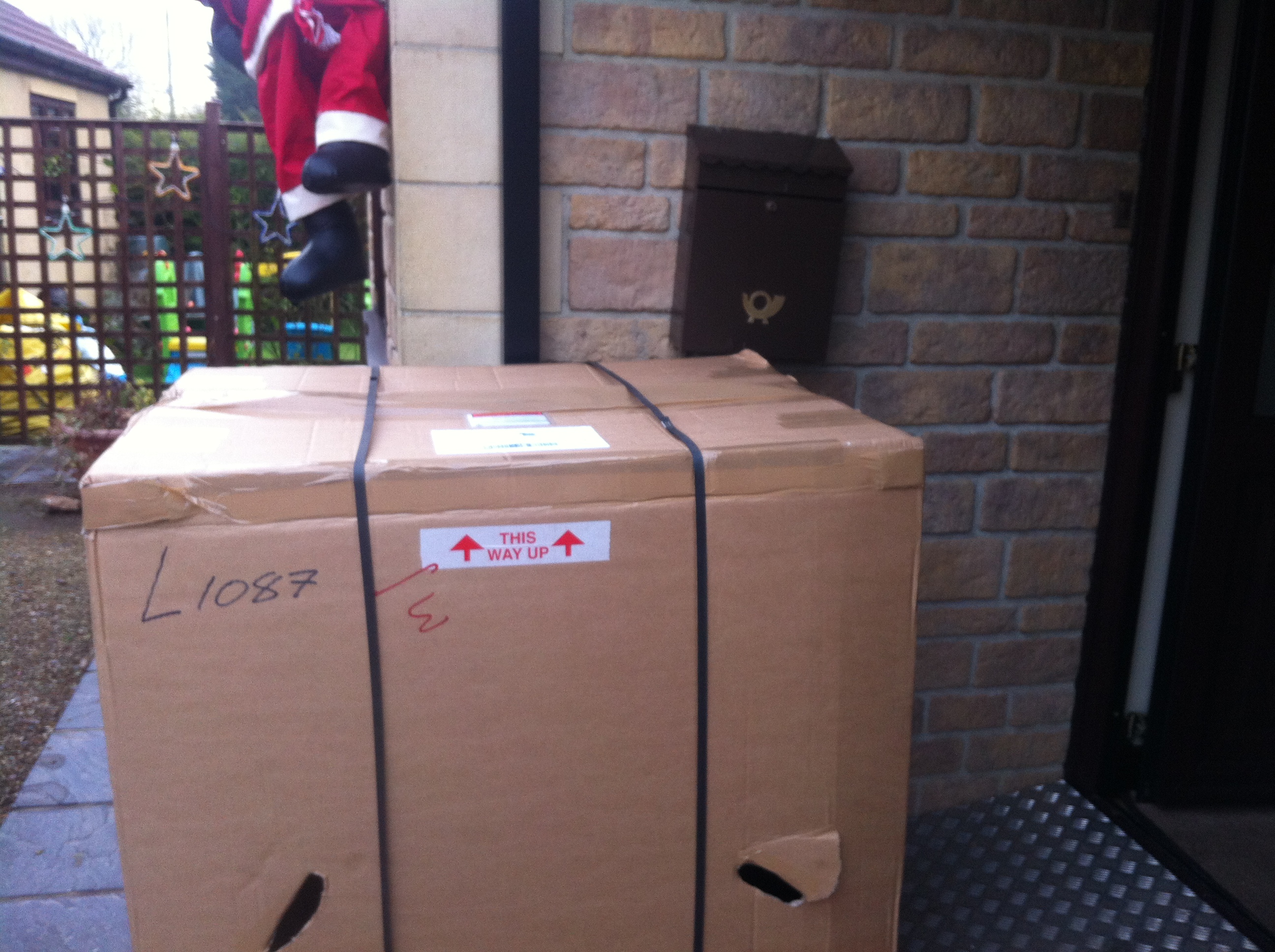 After my Wife had stripped all of the packing off to get it through the front door and in to the front room to the spot she had made for it, it looked like this. 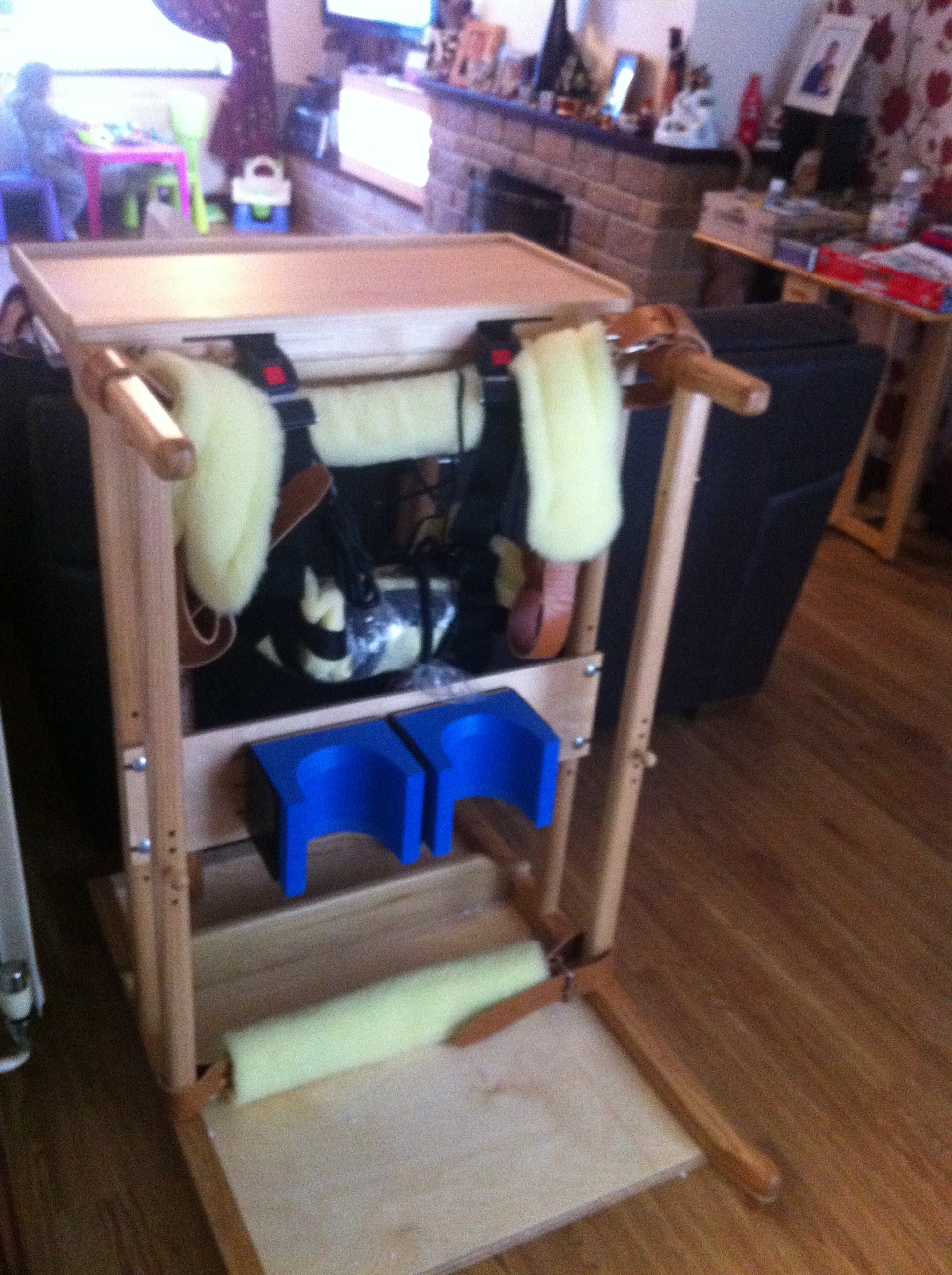 Only the uprights needed to be put in to place, these would hold the support straps for the chest straps which would stop me from doubling over if I had a spasm. So my Physio arrived with another Physio as it would be the first time we would be using the frame, to that end she wanted to ensure she had some help to adjust and observe. It did not take too long for us to set it all up, get me in to position and with me controlling the ascent…. 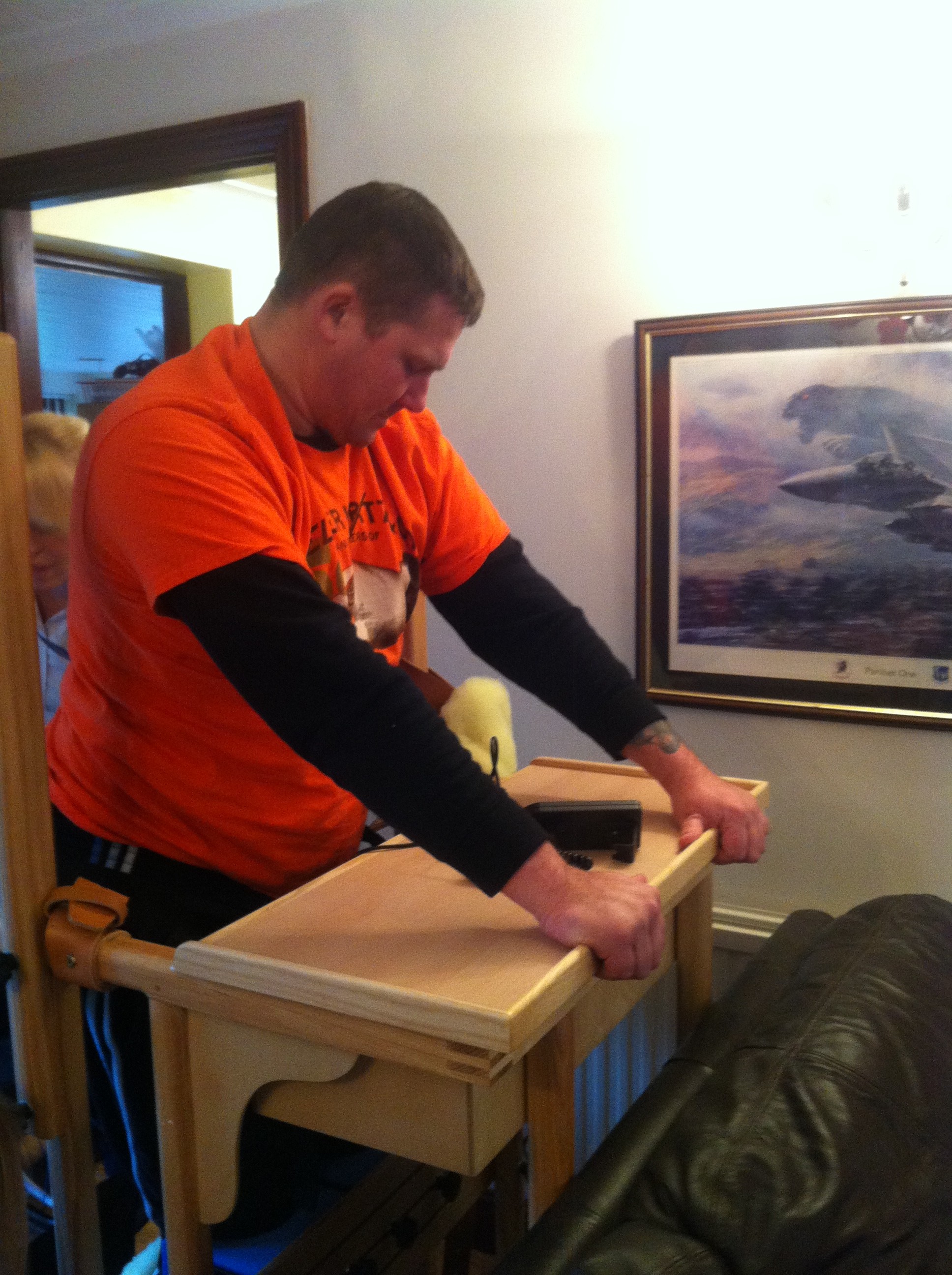 I slowly got in to a standing position. Now it was time for the Physio’s to look at the position of my feet all the way up to check and adjust my overall posture. All the time that adjustments were made they would keep asking if I was comfortable, if I felt light headed or sick and we kept an eye on my spasms. After some adjustments they managed to get me in to a much more comfortable and natural posture. 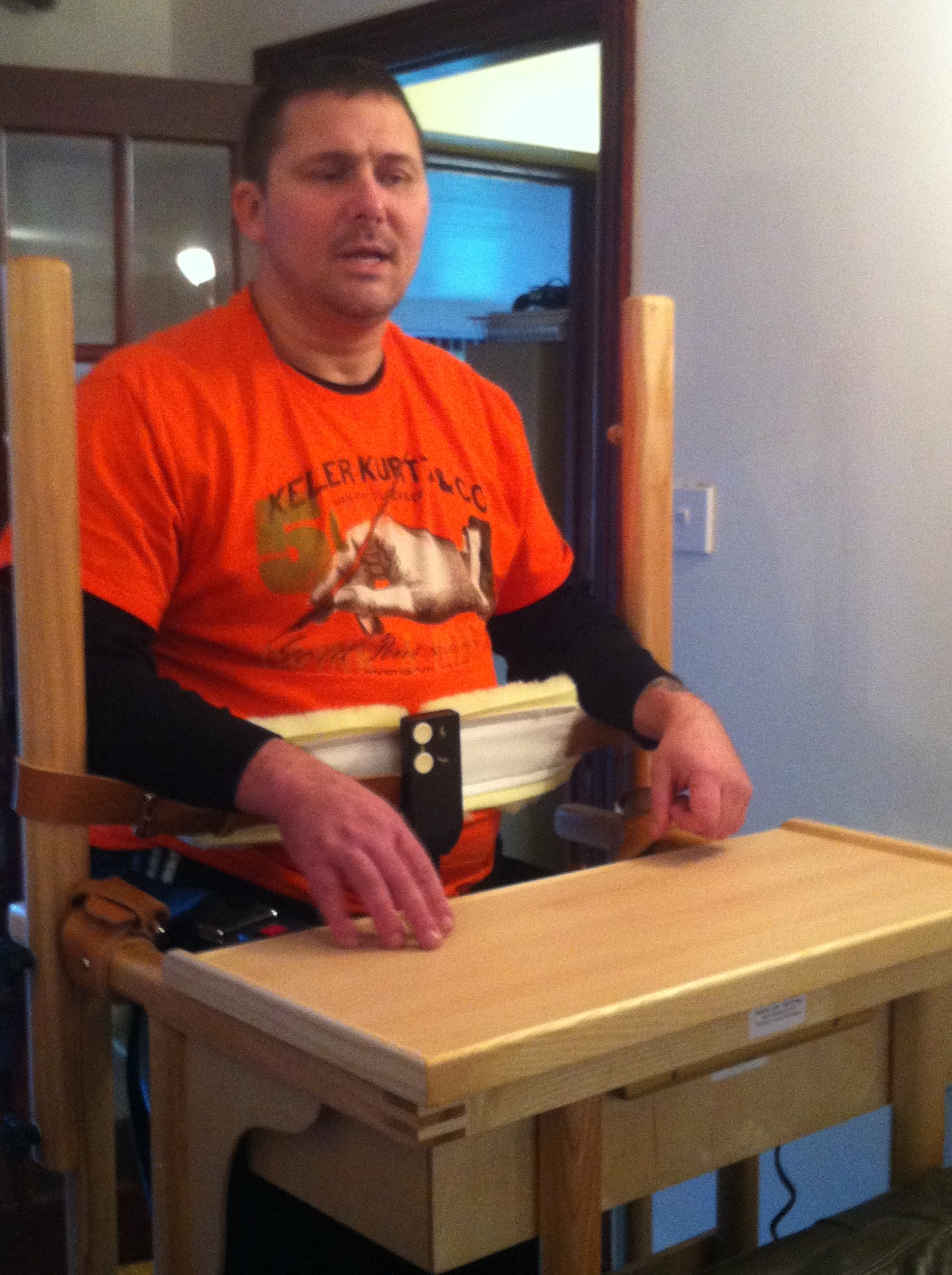 With their help undoing the straps that hold me in place I lowered myself back in to my chair and we took the harness that my butt sits in off. I moved the wheelchair away from the standing frame and then we got me back in to it from the start. From me lifting myself to get the harness under my butt, hooking it in to the motor to pull me up, locating my knees in to the support `cups` and getting me up in to the standing position. All in I stood for a good hour today. We then spoke about a programme of how often I would go in to the frame and for how long. It was explained how the straps work and which holes they will be secured in and then we put all of the straps in to their positions and on the holes they should be on. This way, when I am helped in to the frame tomorrow, it will be plain where everything should be and how tight it needed to be to give the support required. It was great to be stood up again but was amazing that I have the frame in my house and so I can stand every day. Who knows, maybe with spending as much time as possible standing as time goes by and we can extend the time allowed in the frame, my body might remember that this is how I am supposed to be and it may jump start my legs in to working again, what do you think? You have to keep thinking positive but at the same time stay realistic.

It was not all positive today though. It would appear that we had a bit of rain last night but nothing compared to what it has been like, despite this though my Wife called to me while I was getting dressed saying that the toilets were out of order again and that they were almost to the top with water. That’s right, the septic tank was again letting water in from the ground quicker than it could pump it out, not being helped by the fact that where it was trying to pump it to would already be struggling to cope with the water that it had to deal with normally and the additional from the rain fall. I called our neighbour who deals with the pump problems to let him know that again we were backed up and he said he would sort it. Unfortunately the only way for this water to be pumped out quicker than it was going in was to drop a second pump in and pump it out on to the garden and then for it to run across our garden for it to find somewhere to run to. At the risk of sounding ungrateful again, I am going to have to contact our landlords and insist that they now do something to sort the problem. We are lower than the tank which is a colossal cock up for a start, but aside from me being disabled, I have three kids that also need to use the toilet as well as my wife. This is now becoming such a regular occurrence now that I am going to have to push for them to sort it. I can’t believe that the old woman who lived here before us lied her ass off about any problems. The biggest bugger is that we had to cancel the couple who organised my 60’s dance night and my Wife’s auntie and Uncle tonight. We were having them round for some drinks and `nibbles` to wish them a Merry Christmas as we will not be able to see them as we all have other commitments, NOT HAPPY. I couldn’t stay with the plan for them to come here as we were still unable to use the toilets at five o clock, the water has receded now so that we are able to use them but it nevertheless messed up this evenings plans.

So that has been the last couple of days, I stood up which was the highlight for me and will be just as exciting for me tomorrow when I get back in the frame again. Monday will be interesting, I have an appointment with my Physio and her Physio mate who came round today which we are all excited about. Not going to say what it is but I am looking forward to it a lot. Now it is time to see if there is any NCIS left to watch and then off to bed. Last day at work for most tomorrow so enjoy