Submitting to the pain killers.

The weather has been great hasn’t it! Beautiful clear blue skies, the big round burny yellow thing in the sky and people able to wear shorts, tee shirts and sun glasses which is just how it should be for the month of May. We have had a couple of minor thunder storms and the garden has had a bit of a water with a bit of rain and the last couple of days have kept us guessing. I looked out yesterday morning and decided against taking the umbrella and even refrained from putting a jacket on and it turned out to be the right choice. Yesterday evening however it all changed. I was talking with a friend who was in town, I pulled over in the car as I had just taken my kids back to my Wife’s house having had them round for tea which was nice. They had played on the X Box while tea was being done and then we ate our food while watching a film which was really nice. Anyway, having taking them back to their house as I said, I pulled up to talk to a friend of mine and in less than ten minutes of pulling up to talk to him it went from a pleasant evening to very dark and threatening to absolutely piss down. We commented on a potential thunder storm and knowing how wet I get while getting out of the car and in to the wheelchair when it rains and with the skies looking like they were ready to dump a rather extreme amount of water upon us, I headed back to my bungalow. It would appear though that the threat of a thunder and rain storm was exactly that, a threat and as far as I could see, it amounted to nothing.

The past couple of weeks I have felt more useful at the parade evenings with 675 (Rifles) Squadron AAC. Last week I gave an introduction to the personal weapon system to the recruits which was really good for me to do. It is a subject that I know about obviously and I really enjoyed the feeling of teaching again, of being able to pass on my knowledge and feeling as if I had a purpose again. This week they did what is called “Ice Breakers”. They have to stand in front of the room and talk for a short period of time about themselves, this is in preparation for their main talk where they have to talk about a topic that they have been given by the recruit training Warrant Officer. This is something that they will have to research and have been given time to research, put together and practice before they have to talk to the room of other recruits. I have been able to assist them on the problems that some face with confidence. For some people, which is more common than you may be aware of, having the confidence to stand in front of a group of people irrespective of if they know them or not and talk about something which they are unfamiliar with and for some even if it is a subject that they are very familiar with, it can be a very daunting experience. I therefore encourage them to talk to me in front of the group and try to get them used to talking in front of the other recruits, I don’t of course let them know that this is what I am doing. I also try to get them to tell me if they are comfortable with talking in front of a group but again in a way that they are not being directly asked. To a degree I am able to figure out if they are confident or not even if they have told me that they do not have a problem with it. A good “combat indicator” is if you ask after an interest period if anyone has any questions. Most will say no or stay quiet and so it is a perfect opportunity to ask each a question, if they are unable to answer the question then it shows me that they have a potential problem with having the confidence to ask a question in front of the group, probably as they do not want to look daft. Something which I have told every soldier I have ever taught is that the most stupid question is the question that is not asked and that if you are thinking of the question then there will be others who are also too concerned to ask it. I believe also that if you have a student who is struggling to grasp what you are teaching, you must be able to adapt how you teach to help them understand. There is much more likely hood that there is a lazy teacher who is unable to think outside of the box to teach than an unteachable student.

I have been able to get people to march without their arms going with the their legs “Tick tocking”, which is right leg and right arm go together instead of right leg left arm which is normally how you walk, simply by making them march in a squad with their hands in their pockets. Once they are able to march in step with the rest of the squad I then have told them to take their hands out of their pockets and gradually their arms will swing higher and higher naturally until they are then able to march with the rest properly. This is a method which I have used a few times, several times on our remembrance parade practices. It can be frustrating when you have the ideas to help people grasp what they are being taught but because you have not done the instructors course in that subject you are unqualified to teach it. I have seen a lot of instructors in my time in the uniform who are what I call “pamphlet wallers”, people who have done all of the courses and teach word for word as per the pamphlet and yet are unable to think outside of the pamphlet to teach the subject. The pamphlet is a tool, a tool to teach the information but it is the instructors responsibility to take the information in the pamphlet and relay it to the students in a manner that they can understand and where possible relate to everyday or easy to remember uses or occurrences. So, as I started to say before I went off on a tangent, it has been a really good feeling working with the recruits again and has given me a feeling of purpose again.

Hoping that the weather holds off for Monday, I really am. My friend Sean, his Daughter and her friend and some of my mates from the new Air Corps unit which was formerly `B` Company which was my unit are also coming along to the Brecon Beacons where we are going to try to get to the top of the Pen Y Fan using the Overlander. I really hope that this goes well as I want to show others who enjoy the outdoors, who for whatever reason may not be able to walk in the hills and mountains any more, that there is equipment on the market to enable you to do exactly that. I will of course be getting photographs of the day trip and video where possible which I will share with you. I am trying to get organised enough to get back in to my model aircraft kits too. I still have several to build and enjoyed sitting and building them but I have been distracted and concentrating on other things which has taken over. I got real lazy for a while too where I just spent the time to watch the television instead of occupying my time with the model building, in the winter months I will be back in to it for certain but I want to do some during the summer months, I’ll have to see how it goes I guess.

My right wrist is is absolute clip at the moment and has been for a few weeks now. It is not like I can rest it either as it is how I have to get out of bed etc. It is how I move, how I get about and there is no resting it. I use the power chair as much as possible so that it takes the pressure of for a short period but even using the joystick to operate the power chair is agony. I have had it x rayed but there is no obvious dislocation, break or fracture and so it can only be wear and tear I suppose and as such will be something else that I simply have to live with and learn to ignore. I am not a great believer in taking pain killers for everything that hurts as it simply masks the fact that there is a problem and potentially causes more damage, I don’t like popping lots of pills which is why I stopped when I got out of Salisbury spinal unit way back in 2011, there were so many tablets I was given but with no explanation as to why they had been upped to the extent they had on the day of my release and so as I said, I stopped them. My new consultant at Stoke Mandeville reviewed what I should be taking when I went to him in 2013 so now I only take a few. I fear though that I may have to admit defeat and submit to the fact that I am going to have to take some pain killers for awhile, bugger!

Well the sun is back out, my Wife has just popped in to do the few jobs around my place that I can’t do and so Peppa Pig and Ben and Holy have been playing on the television for `Pickle`, now though I am going to be going out for some fresh air as the jobs have been done so enjoy the rest of the day and I’ll catch up soon.

One last thing before I go. One year ago today this brother soldier was taken, words need not be added as you will all know he who he was. I stand by the fact that photographs of him are the ones that should be shown and not even the names of those responsible should be mentioned. “We will remember him.” 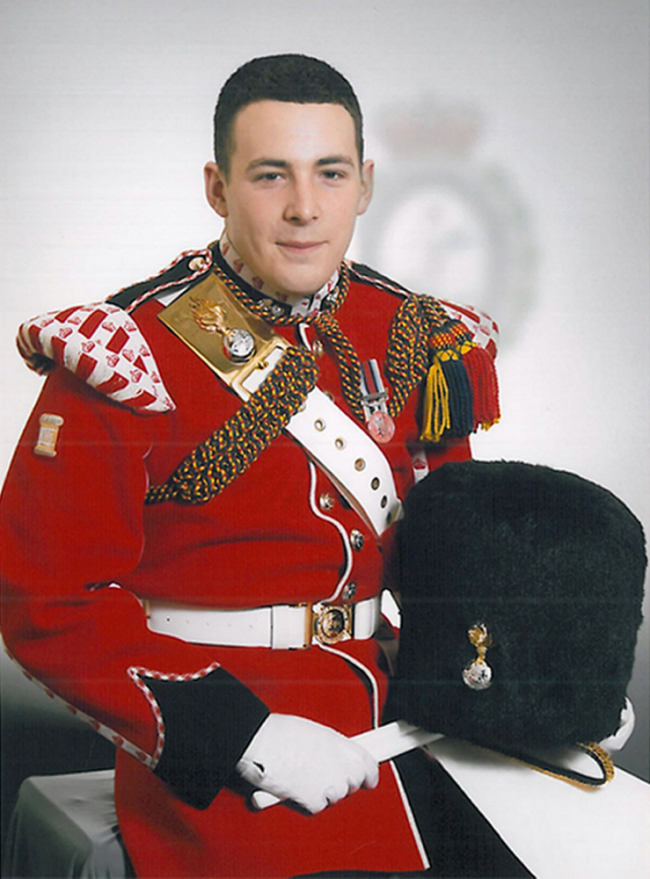