My second week in Stoke Mandeville was hard work as I was still not well with the infection which caused me to sweat like you would not believe but also because I tried a frame which allowed me to “walk”. It took a bit of setting up for me by Katie and Liv but they did spend some time during their lunch break and got it so I could use it. It was a very interesting experience which took some getting used to, to get the rythumn of rocking side to side and lifting the feet but after a few sessions on it, finally on my last day I managed to get it. Had I been there longer I would have used it daily and would have had to have set my goal to get to my ward and back, although I feel the slope just outside of the OT department would have maybe not allowed that to happen but certainly walking up and down the corridor outdside of the gym would have been a must. 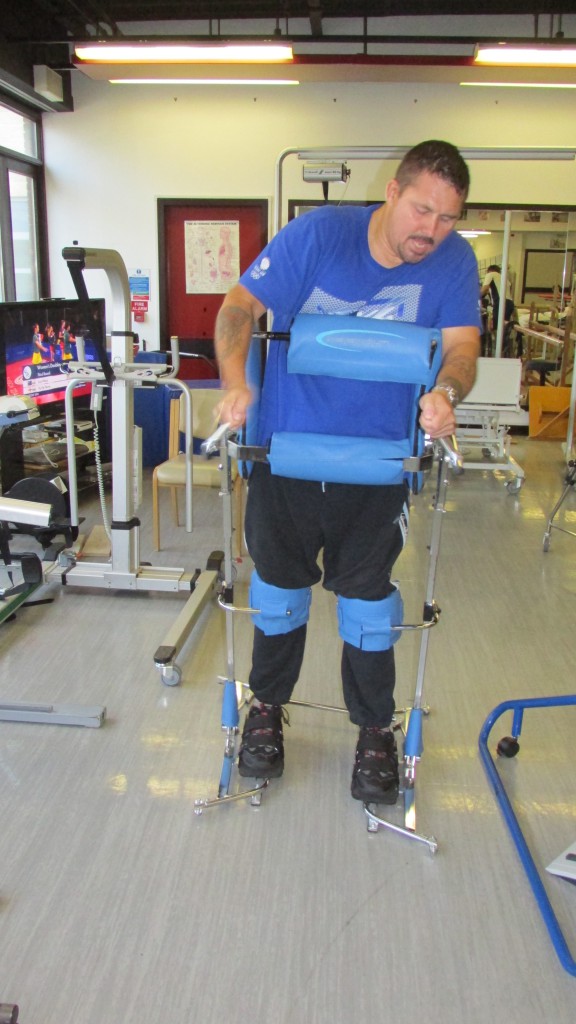 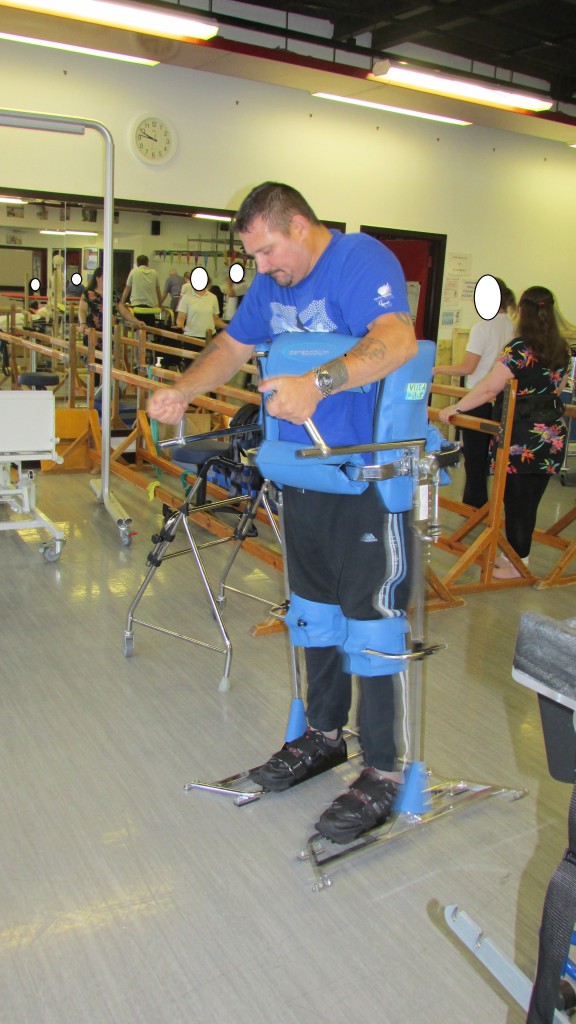 The frame wasn’t set 100% correctly as my chest rubbed across the front pad which when I got home yesterday and got undressed for a bath, I noticed I had rubbed the skin from part of my chest but it was not painful and to be fair, I did lean forward in the frame more than I probably should have done, but it was a bit of a learning experience for me and my helpers, I loved it though. Losing a bit of skin from rubbing was a very small price to pay for the amazing workout I got and more importantly, the feeling I got from using the frame. Whichever way I look at it, despite it not being in the traditional sense of the word, I walked around the gym and had spent at least four days all be it initally with help from Liv and or Katie, walking around the gym. In the early stages I had to have Katie or Liv pull the handles to help me move forward which it would appear gave them a damn good workout too, and when Liv was left to work with me as Katie had other patients, (I literally would slot in if Liv could spare some time), it resulted in both of us needing towels to wipe the sweat from our foreheads but after only a few goes I did more and more myself, which I think Liv was secretly pleased with especially as I trod on her foot. Here is a video of me on Friday morning, Liv went in to work early just so I could have a final go in the frame bless her as I was leaving that morning. To you it will look awkward, uncomfortable, hard work and many other things and I agree with all of the afore mentioned descriptive words, but what you will probably not be able to understand or appreciate especially if you are able bodied people, is the feeling that I personnally got from the fact that although I was in a frame, I WAS WALKING!