What’s been happening then?

Last weekend I took my Son to a WW2 living history event. There were a few vehicles there, some replica aircraft, some static displays and some reinactments. It was actually quite a small event and unless you wanted to wait around through the day for different bits then there was unfortunately not enough to fill the day. I am sure that each year it will get bigger, indeed I hope so, but for me, this year was a bit of a dissapointment. Here are some pictures though. 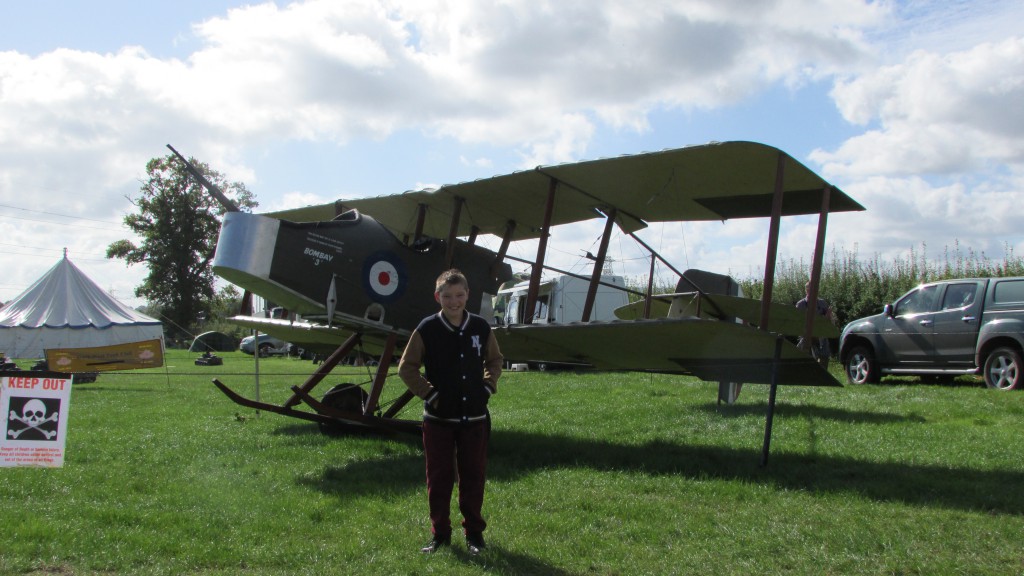 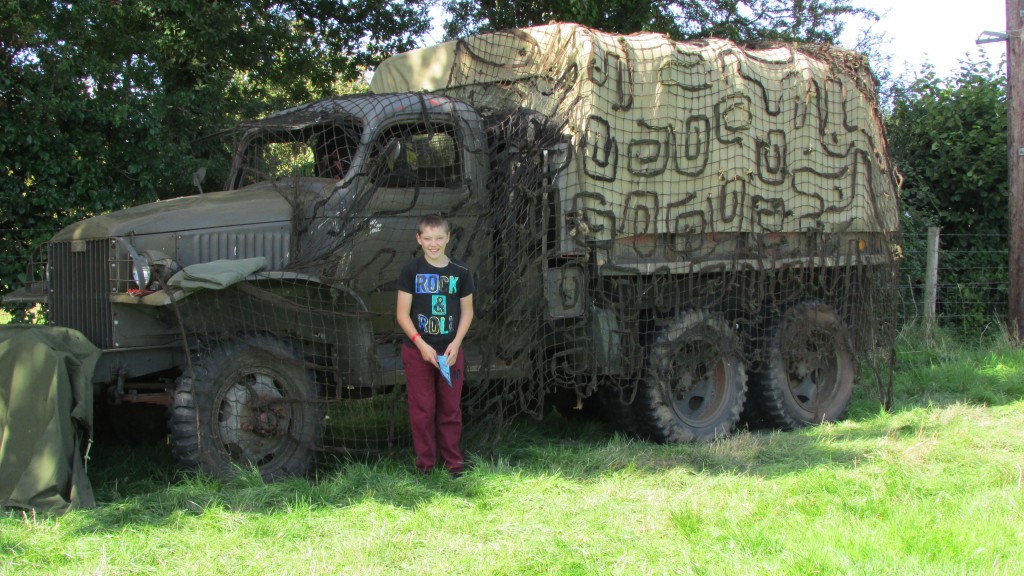 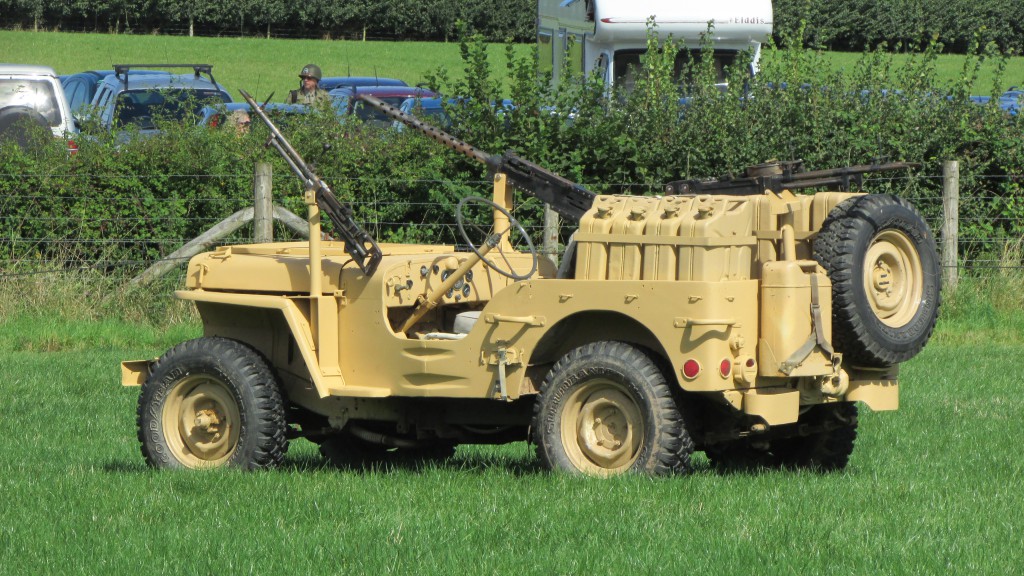 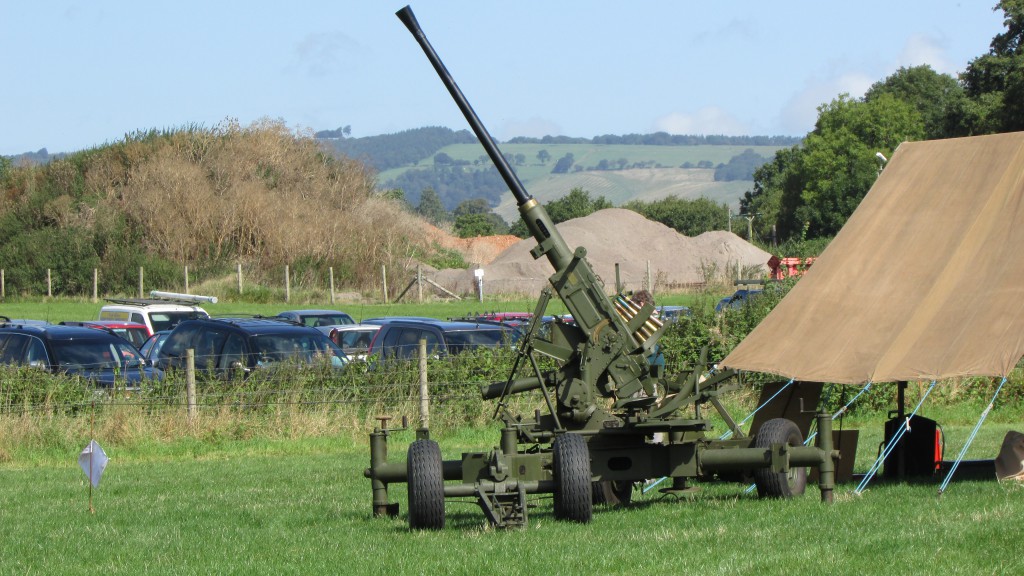 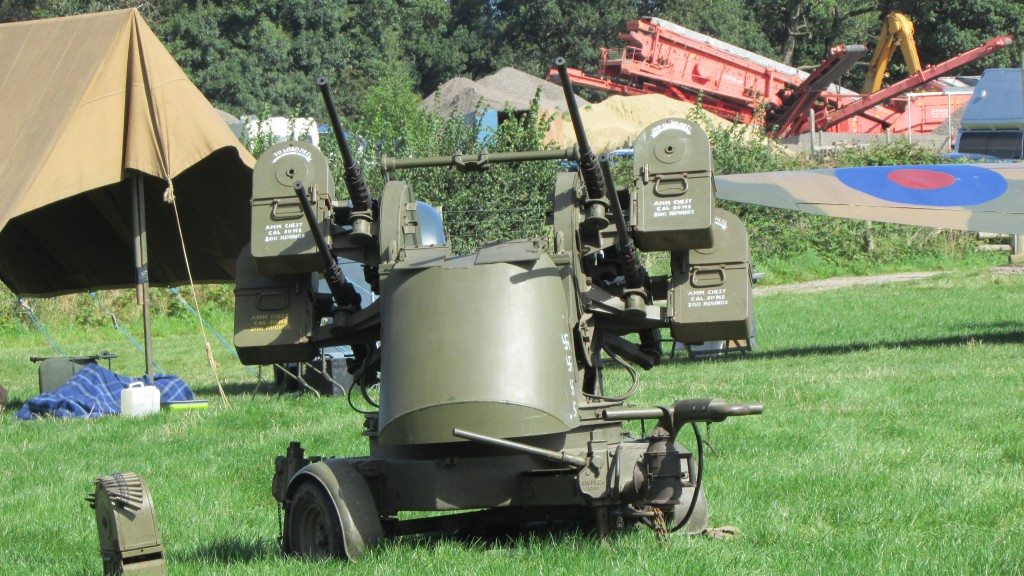 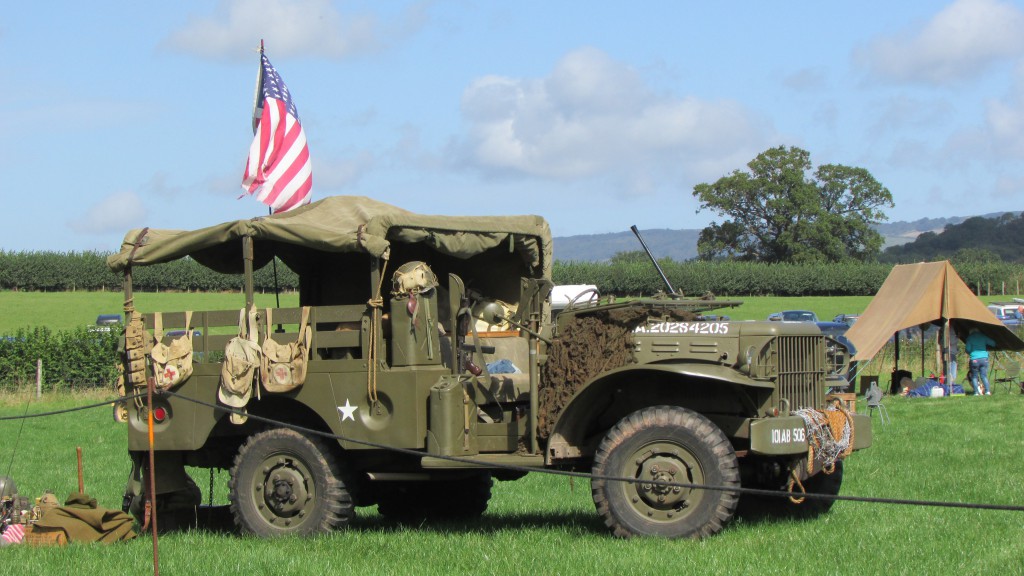 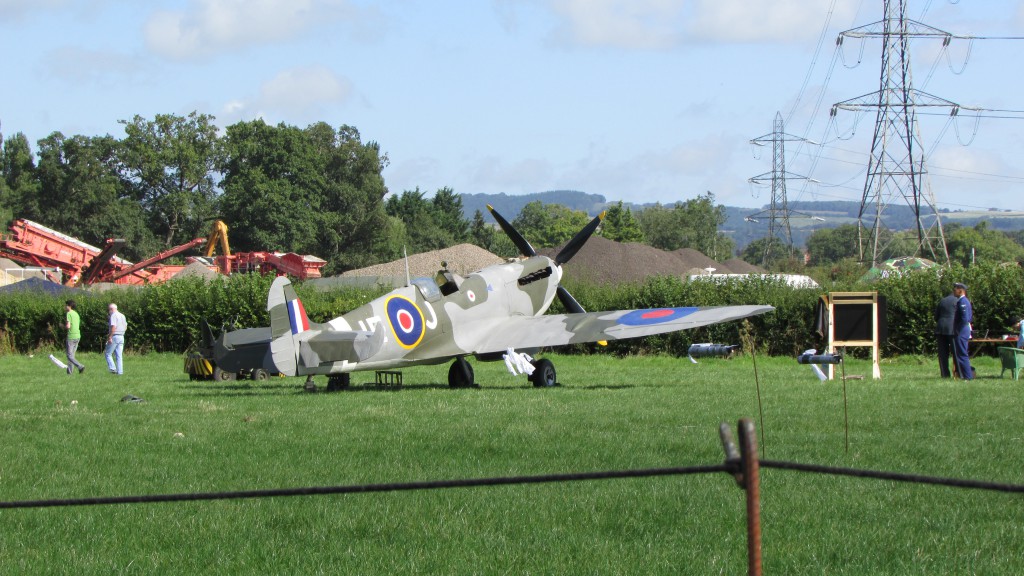 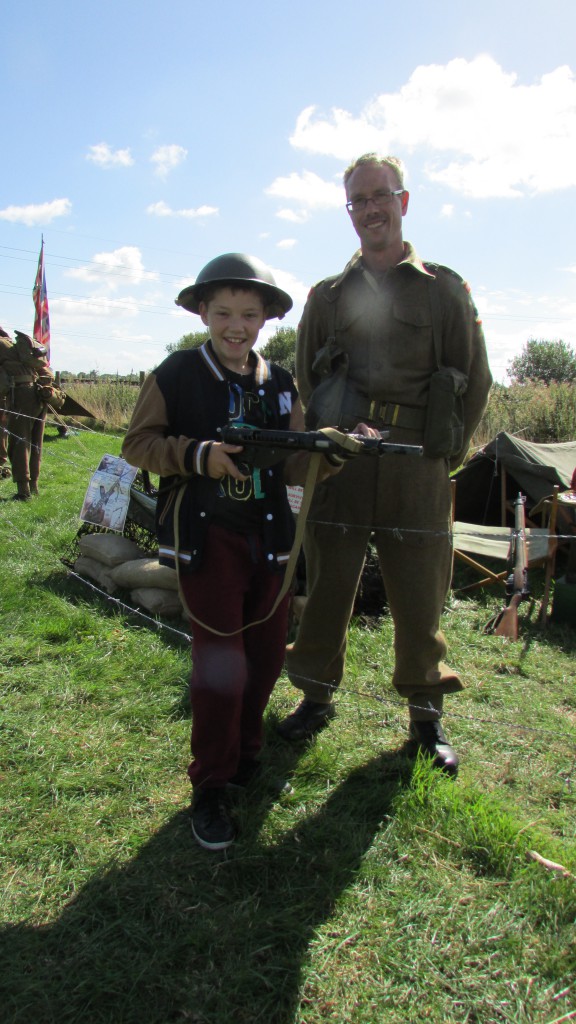 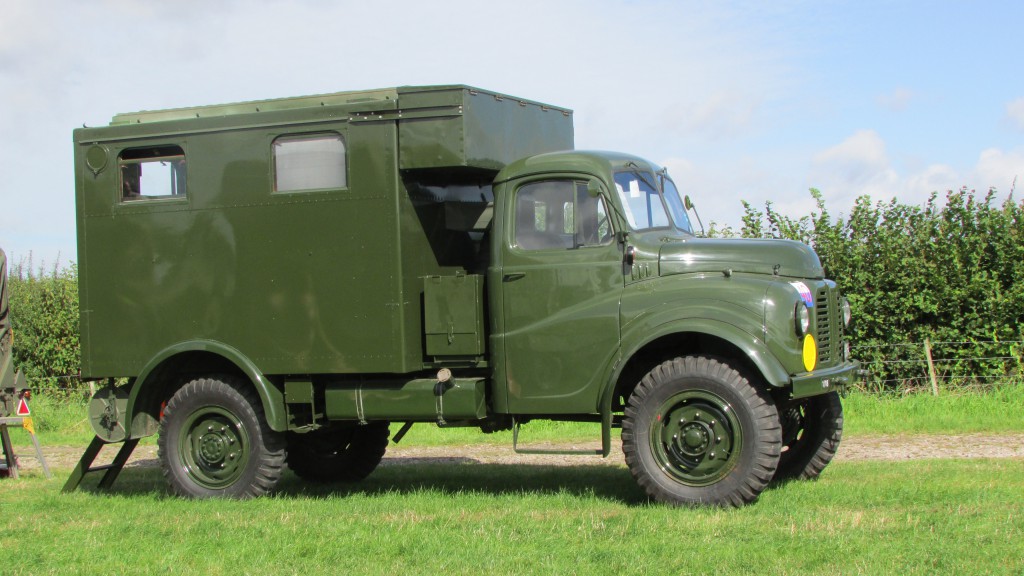 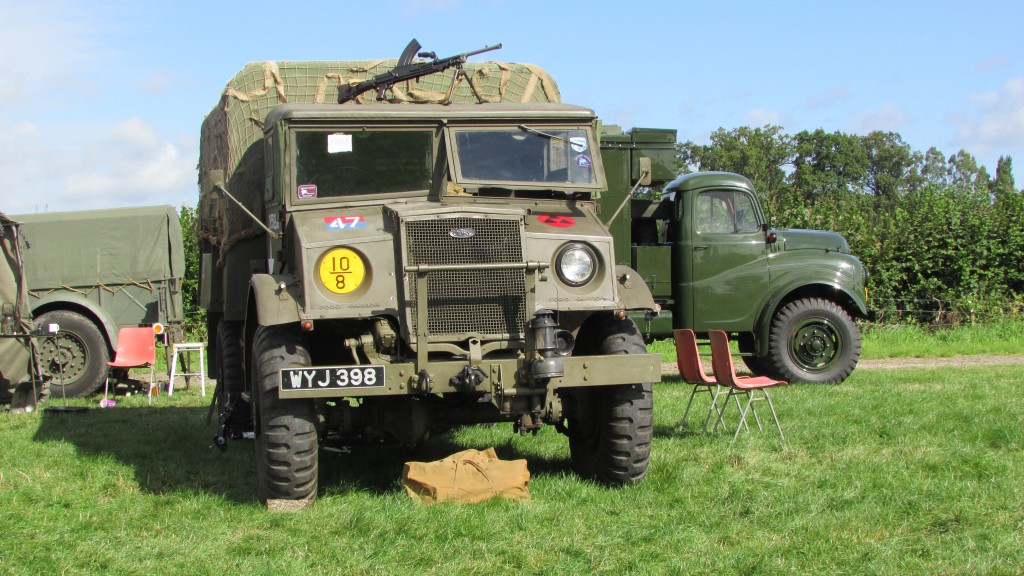 Believe it or not, these tanks are radio controlled, and they were amazing! 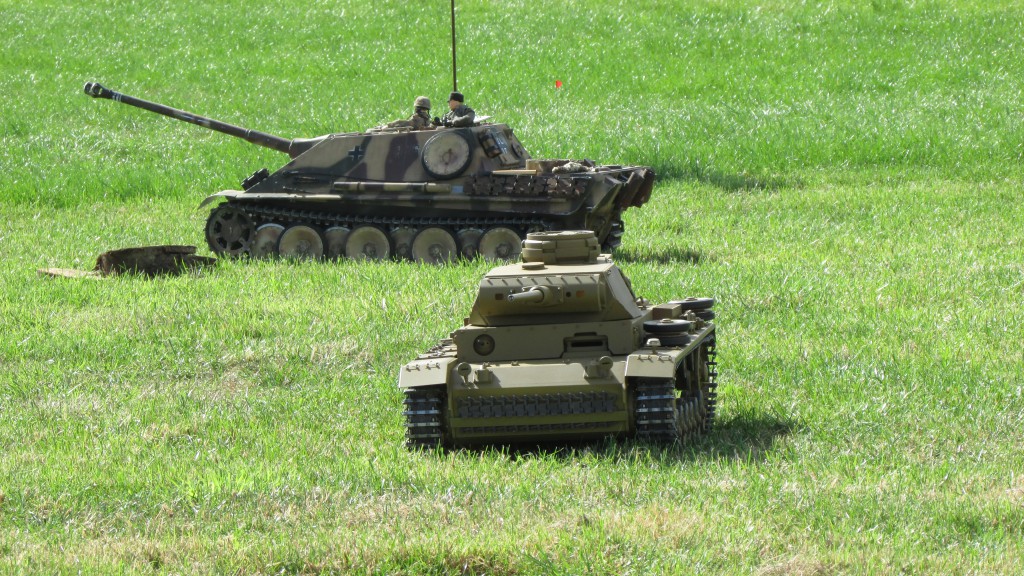 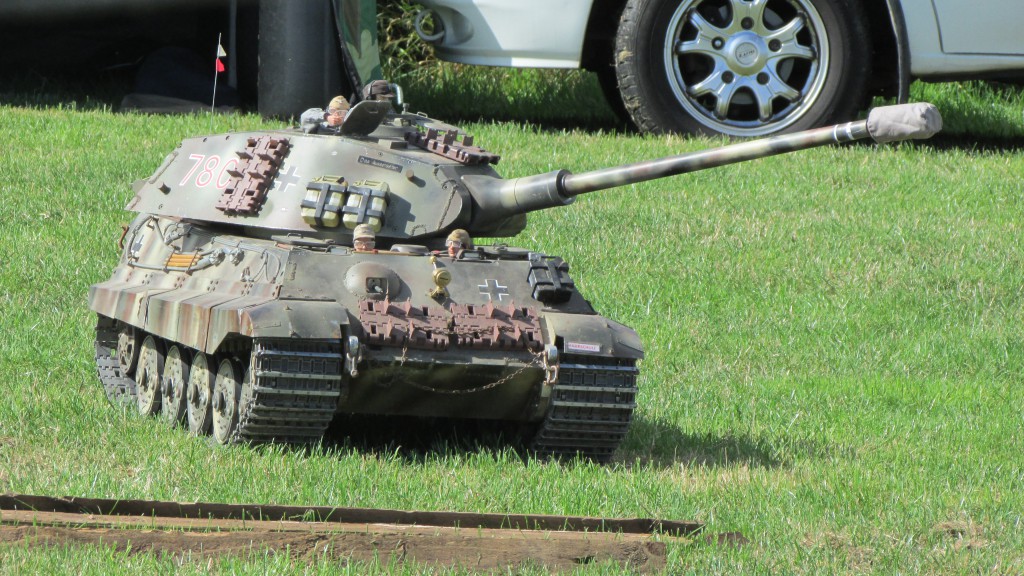 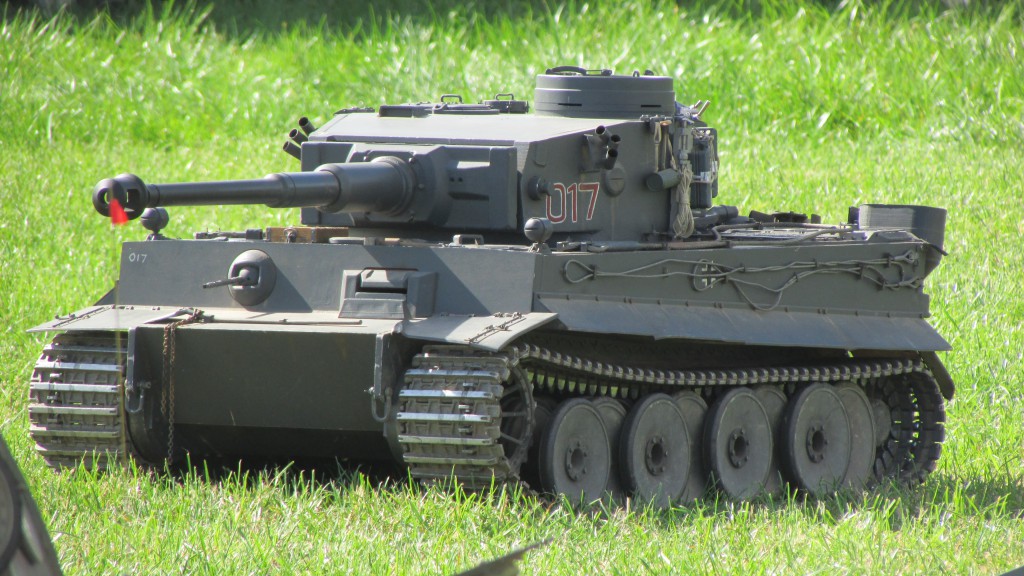 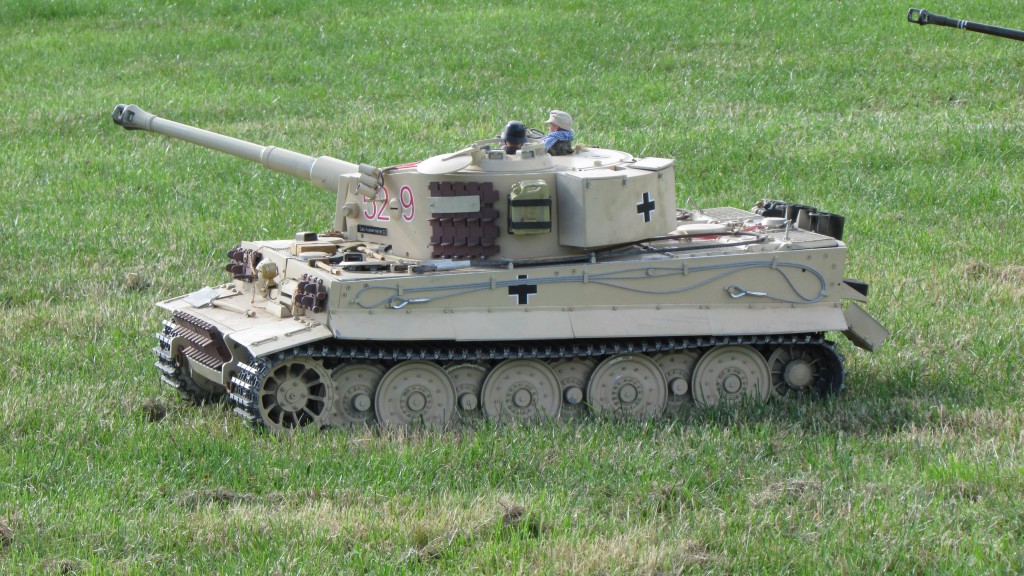 This next one isn’t though! 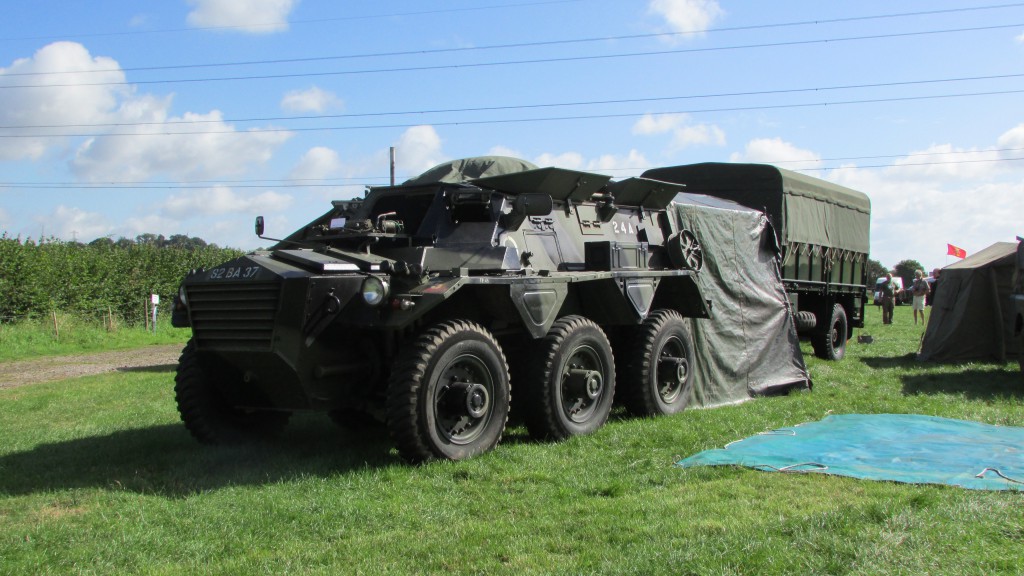 Well the school holidays ended which meant that it was the first day of school for “Pickle’. She was really excited but as she had been accepted very late to the school after an appeal as my Wife and kids had moved to a new house, she had not had any visits to meet her teachers or anything. To that end I went up to meet with my Wife and “Pickle” for her first time at the school. We got there early as had been arranged and we went in to the classroom and met with her teachers. She was shown where her snacks would go, the cloakroom and toilet and was given a little time to get used to the room and the people in it. Then it was time for the other children to arrive. For the first day, as she had not visited and would not know anyone due to her nursery being in Ilminster and not Chard, she was allowed to have her first time at the school in the afternoon which is when her best friend would be there also. As “Pickle” is one of the eldest in the class she was supposed to go in the morning as they are only doing half days to begin with, but we were able to sway the staff and allow her to have her first afternoon with her friend.

Up until this point “Pickle” had been fine but as the children started to arrive in to the classroom she reached for the hand of her Mum, and she would NOT let go. There were a few nervous tears and then, in through the door came her best friend from nursery. My Wife took “Pickle” to see her and then to one of the activity tables where after a few minutes she let go of her Mums hand and we simply watched for a few minutes. There is the time which arrives when you have to let them get on with it and so we said goodbye briefly and left. When we arrived to collect her though she was all smiles and very much looking froward to the next day. For all of last week I met with them to take her to school with my Wife which was great, being able to take her to school and collect her but as I can’t easily get in to the classroom due to the amount of people I have to sit in the playground while my Wife takes her in and so I doubt if this week I will go. I really enjoyed `st-rolling` to school with her but it’s just not really practical now, we’ll see what happens and if she asks me to go then of course I will. She looked proper smart in her uniform.

The following day it was the turn of my Son and Daughter to go to school, this would be the first day for my Son at the school and a return to the school for my Daughter. My Son was looking forward to his first day and was excited to go which was good, my Daughter also happy to be going back. Five minutes, five minutes my Daughter had been in school and she was told that the following week she would be in what is essentially detention for the following week because of her hair. Over the holidays she had part of her hair dyed blue (like you do), and some highlights which are a blonde color. Now my Daughter is about as far from being girlie as you can possibly get so the fact that she was taking an interest in highlighting her hair we actively encouraged. She has had it styled so that it falls across her eye and she looks great. The blue washed out and the blonde color remains. I have to say that I think it looks lovely and suits her. So yesterday, (Saturday), my Wife and Daughter went to the hairdressers to ask their advice having washed the hair with a mixture of shampoo, washing up liquid and bicarbonite of soda. The hairdresser told them straight that any dye will make the blonde areas a darker shade of brown and that in any case, the blonde is a color. I have to say that the hair color is not offensive, it does not make my Daughter look any less smart, it does not affect her learning and if I decided to pay to have her hair dyed blonde to all match, she would then not have her natural hair color and as a result would also suffer the same detention. This, in my opinion is a rather pathetic attitude and as such I have instructed my Daughter to tell whichever teacher puts her in the detention to call either myself or my Wife BEFORE HAND for us to discuss it, during the discussion I hope they will be able to explain to me the justification of the detention and the reasoning behind their opinion that her hair color is affecting her ability to learn. I have not met the teachers of this school but I am assuming that the teachers are not allowed to have highlights either? UNBEFRICKINLEIABLE!! Here is a picture of my kids ready for school, I honestly can’t see what the fuss is about. 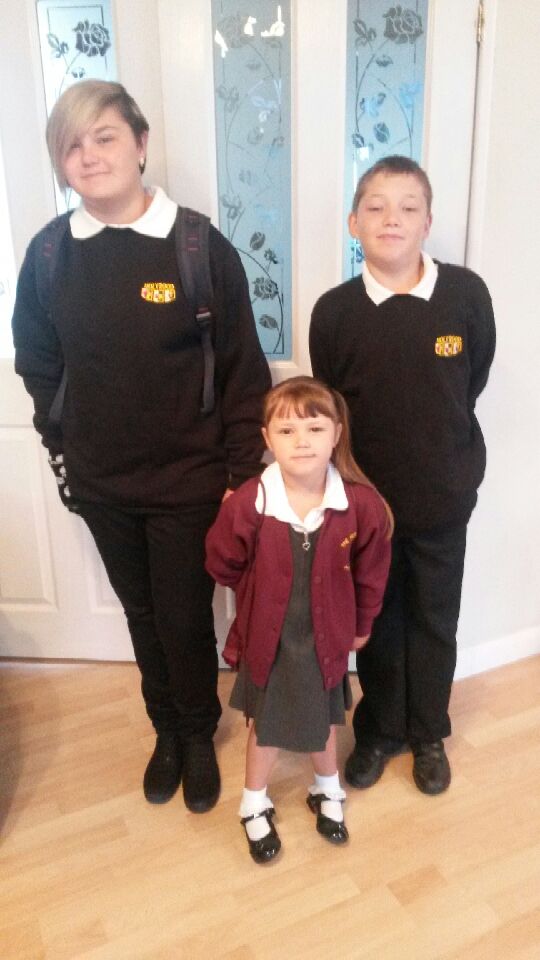 Yesterday, (Saturday), I went to the Somerset Military Tattoo at Taunton Racecourse. Darren drove the “Chucklebus” for me as I needed to take the Overlander, and as a thank you, he and his two children went for the day and they had a great time. I had been asked by the ABF The Soldiers Charity if I may be able to attend and support their stall to which I said “Yes”. I am as you know about “Giving Back” to the charities that have assisted me and I thought that if the Overlander and I were there then people would be able to talk to someone who has benefitted from the charity funds and also to show how the money has helped. ABF The Soldiers Charity were one of the charities that assisted me in the purchase of the Overlander which as you know allows me to get out in to the woods and fields which I can’t do in my manual or powered wheelchairs. 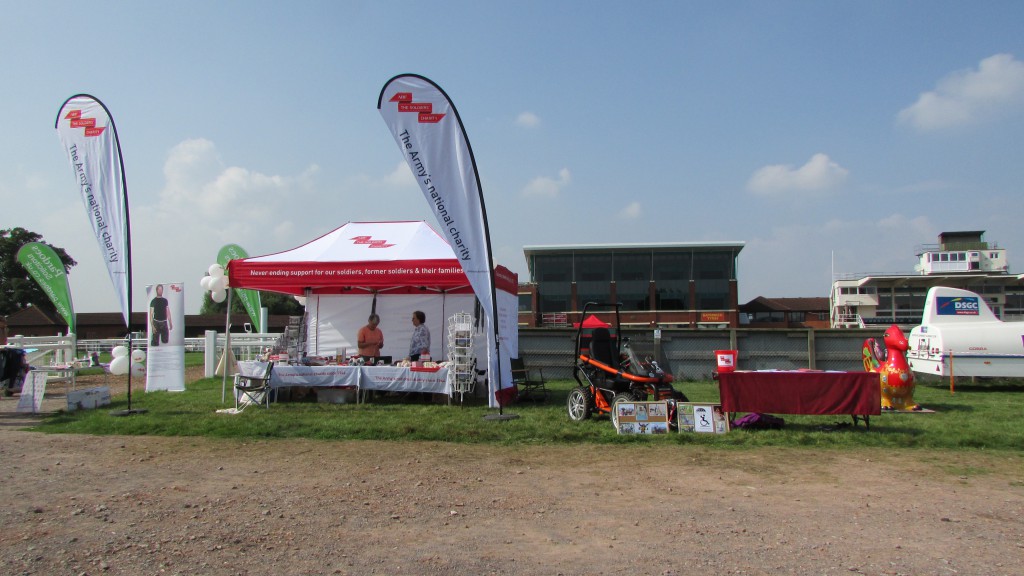 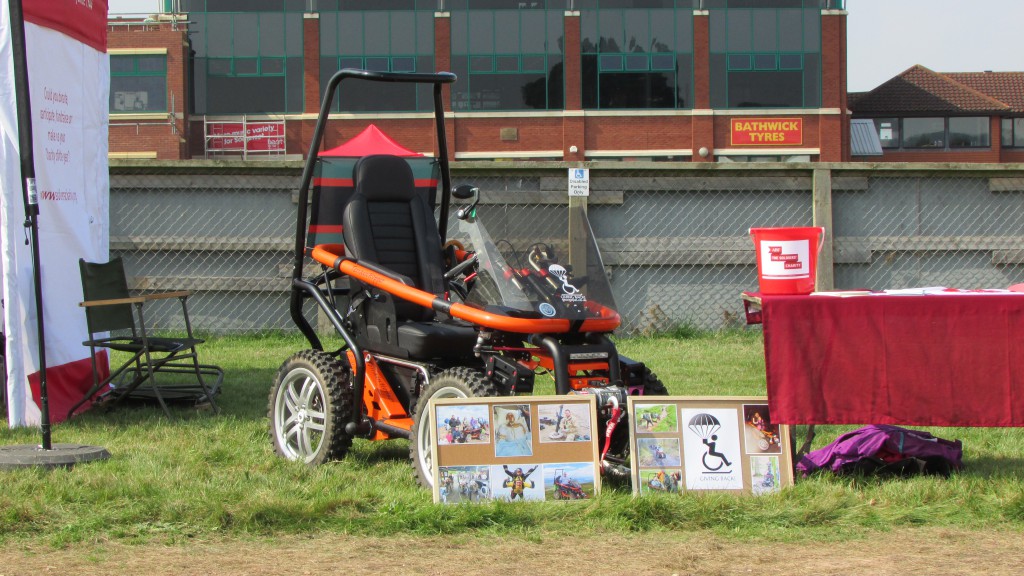 People will put money in to the collection buckets for charities but rarely see how the money has been spent and so I thought that giving people the opportunity to talk to a beneficiary was a good idea. I spoke to so many people and despite the rain for a half hour or so first thing, it soon dried out and the sun shone for the best part of the day. I did not get to look around as I was there for the ABF stand and although I could have looked around I chose to dedicate my time to talking to the public who came to see me. I did get to watch the parachutists of the REME (Rough Engineering Made Easy) or as it should be Royal Electrical and Mechanical Engineers whos landings were actually very good. 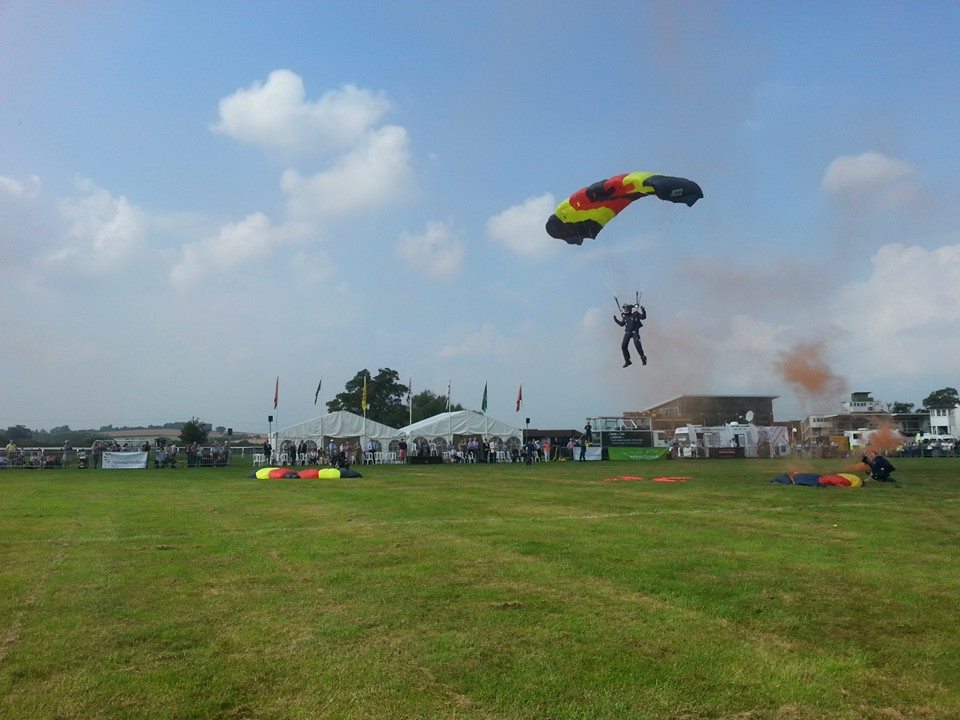 I have to say “sorry” too. Sorry to the two young children who desperately wanted to go and sit in the glider of the Devon and Somerset Gliding Club which occupied the space next to us. They had wanted to go and sit in it when I started talking to their Mum. The conversation continued with their Dad also and as a result there was no time left for them to sit in the glider as their Mum had to get back for work. They were so very patient and well behaved though even when they were told that there was no time for the glider. So, “Sorry” kids, but well done to you for being so well behaved! I do not know how much was put in to the bucket that I had but however much it was, was more than the empty bucket I put on the table so “Thank you” to all who put in to it, the money can go to helping another individual who will also appreciate it.

Today then. Well today has given us some very nice weather for a town centre event. The road at the top of the town was closed off to traffic and a water slide was put in place. People had booked up a time to slide and it ran very much on time from what I was hearing the organisers say, and then came an announcement that there were places if anyone wanted to have a go who had not booked. So that was my Son racing off then bless him. 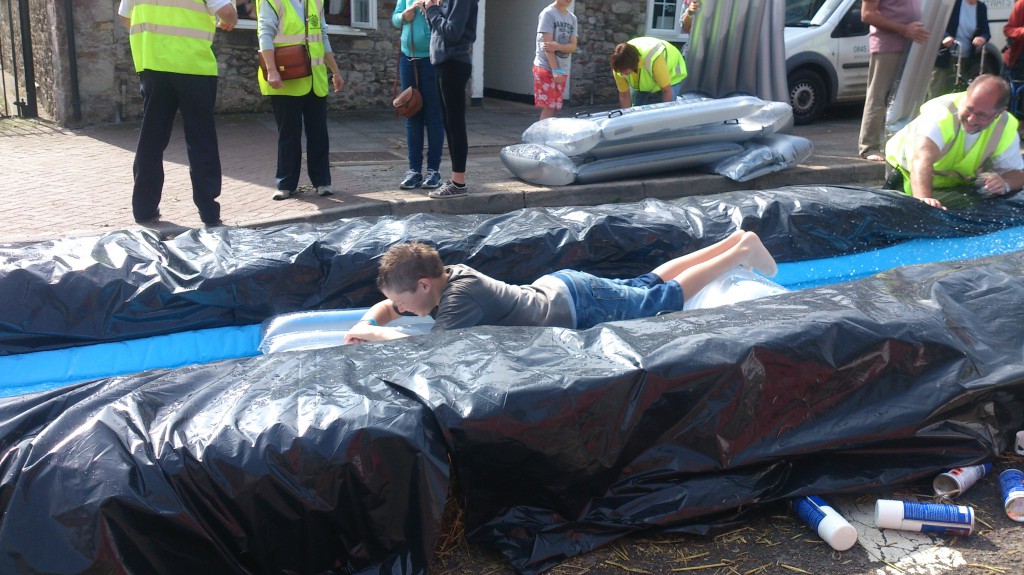 He had another go too, and they splashed water on him as he went down which he found hilarious. It was clearly quite warm today though as he dried off in no time at all.