A frustrating time for Karl.

Karl didn’t come with us on to site on Friday morning due to his foot giving him too much pain. It had to be re-dressed and this delayed his arrival so Jo helped with the sieving and finding of the mosaic pieces, pottery and marble. The week had really taken it out of her leaving her really tired and so to be sitting down instead of digging was a blessing in disguise. The soil being delivered to us for us to sieve seemed to be relentless and kept us busy for a good couple of hours during which time we were finding an abundance of small mosaic stones, or tesseri as it is called even if I haven’t spelt it right! It was just as we had finished our last bit of soil that Karl arrived having been driven up with our days visitors. The visitors today were also obviously from the military and were really interested in the history of the site and also in what we were doing; this meant that they addressed us to get our take on the Op Nightingale dig in Cyprus and what we were getting out of it. It is nice that they do ask us, some of the visitors are very high up the “food chain” and as such are people that I certainly wouldn’t normally have any contact with and whilst it is easy to say that they are only really coming to talk to us and engage in what we are doing because it looks good and is probably the done thing, I would have to disagree. As a general rule even if someone is very good at hiding it you can tell by either the length of time that someone spends talking to you or if they look around whilst you are talking to name just two ways, if they are there out of a genuine interest or because they feel have to. On the occasions that we have been visited and spoken to at no point in time have any of the visitors seemed like it is a duty to visit. After speaking to us they are given a guided tour and `history lesson` by Helena who is the head archaeologist on the site.

Karl sat down to sieve with me while Jo retired to the shaded area to sit and relax, it would have been better for her to have had a day off I think but sitting on site without having to dig was one step towards the relaxing that needed. It was really unfortunate though that due to the nature of the dig and how what they had exposed and were now finding, there was nothing more for Karl and I to sieve. Now this is fine for ten, twenty or even thirty minutes but after forty minutes Karl did get frustrated. For him it was too frustrating to be sat doing nothing effectively watching others work and so he took himself off for a walk to the minibus and I can see what he was saying. It is much the same for me as I physically can’t go and dig or trowel due to my reliance of the chair, my inability to be able to sit on a hard surface and my balance or lack of, (even though I have put on so much circumference I still don’t right myself like one of those “Weeble” toys from old!), I guess the difference is that I have either reached the point of “nowt I can do about it” and therefore have learnt to ignore it and so as far as people can see it doesn’t bother me (even though this couldn’t be further from the truth) or I have become a right lazy bugger! Eventually though the day came to an end and we returned to camp which is where I spent the afternoon and evening.

On Saturday we went in to Pafos for a day out. The forecast had been for thunder storms but this was simply not the case and we had clear blue skies and sun all day. I really like Pafos, although the pavements are not in any way shape or form wheelchair friendly and the roads are shall we say, interesting if you decide to take that route in the wheelchair. Zebra crossings are only a go if there are no cars as the rules with regards to stopping for pedestrians simply are not there or certainly if they are, they are not adhered to. Stopping at red lights also seems to be optional for the vast majority of drivers so you really have to make sure you have written a will if you are a wheelie. The shopkeepers do their best to make their shops accessible although I was able to get in to some shops but there was no way I was going to try to look round them or I would have needed to be sponsored by MasterCard (other credit cards are available and I have none of any of them). The bars though, they are more than helpful which was unfortunate for me as it meant that I spent quite a large proportion of the day sampling the drinks on offer. I think we all know where this is going don’t we. I did have a mixed mezze though. A fish and meat Mezze for lunch accompanied by a salad (healthy!) and chips (not so healthy) which was absolutely beautiful. I had to wash it down with a beer or two obviously and then I decided to try a cocktail.

Cocktails are not something I had ever tried, or had any desire to try but as the sun was out, and it felt like a holiday I thought I would sample some. Two bloody pages of cocktails in the menu, TWO PAGES, immediately my brain shut out the logic that this was going to get both expensive and messy and as such the red warning triangle was absent which in my head meant all was fine. Clearly this was not the case as the last thing I remember was talking to Diamaid on the drive back to camp. I have no idea at all how I got to my room or in to my bed. I was rudely awoken this morning at 02.00 when my legs were doing the Riverdance again which normally I sleep through unless they are bad and while I lay there watching the dancing; I felt a nasty spasm developing. Powerless to do anything to stop it I tried to sit up in the hope it may subside but no, my legs were not having a bar of it. Super spasm erupted and my legs kicked up and back whilst bending and hit my chest resulting in a huge amount of pain and a very girly yelp from me. I am allergic to pain at the best of times but this one spasm was so violent I genuinely could have cried. As quick as the legs thumped up in to my chest they threw themselves back again with such force I actually yelped again as I stretched out, and of course when my legs were stretched they flick and shake so fast that it also continues to hurt.

At 07.15 I was awake again and decided to get up. The sun is again beautiful and a light breeze exists. There was another day trip today but I did refrain. I wanted to write the Blog and be sponsored by Nescafe today and as a result I have spent the entire day today in the Sergeants Mess lounge. I have met more people and at the moment I am sitting with three other regular personnel. We have been chatting and it would appear that the one thing that I have in common with two of them is that we were all shitfaced last night and we have had some proper giggles about our days yesterday.

Finally, it is of course Remembrance Sunday. There is the distinct possibility that this will be the last Remembrance that I will be in uniform. I really wanted to parade with the Squadron that was `B` Company today but I chose to go to Cyprus. I have been thinking of the three guys we lost “Kit”, “Reedy” and “Marshy” today, one thing that did dawn on me and kind of make up for the fact that I am not in Taunton and Ilminster is that it was in 2003 that I was in Cyprus with “Kit” on exercise. Rest in Peace all those brave souls who have given their lives.

“WE WILL REMEMBER THEM”

The soldier stood and faced God, Which must always come to pass. He hoped his shoes were shining, just as brightly as his brass. ‘Step forward now, you soldier, how shall I deal with you? Have you always turned the other cheek? To My Church have you been true?’ The soldier squared his shoulders and said, ‘No, Lord, I guess I ain’t. Because those of us who carry guns, Can’t always be a saint. I’ve had to work most Sundays, and at times my talk was tough. And sometimes I’ve been violent, because the world is awfully rough. But, I never took a penny, that wasn’t mine to keep… Though I worked a lot of overtime, when the bills got just too steep. And I never passed a cry for help, though at times I shook with fear. And sometimes, God, forgive me, I’ve wept unmanly tears. I know I don’t deserve a place, among the people here. They never wanted me around, except to calm their fears. If you’ve a place for me here, Lord, It needn’t be so grand. I never expected or had too much, but if you don’t, I’ll understand. There was a silence all around the throne, where the saints had often trod. As the soldier waited quietly, for the judgement of his God. ‘Step forward now, you soldier, you’ve borne your burdens well. Walk peacefully on Heaven’s streets, you’ve done your time in Hell.’

REST IN PEACE MY FRIENDS. 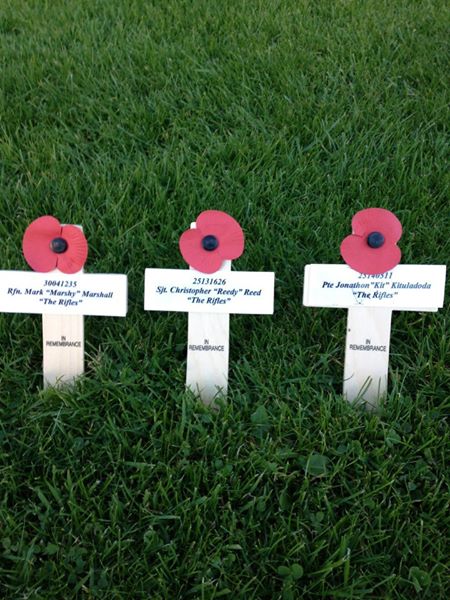