On Sunday I spent a good part of the day with my children at my Wife’s place. We wanted to see each other as it was Fathers day and they had some presents for me. The weather was really quite good on Sunday, so good in fact that when I arrived to see them, they were already having water fights and splashing in the large paddling pool. My Son had stayed with me overnight which was great, he had enjoyed himself, we had been racing on the game on the x box which was really funny. He would race and I had to try to beat it. He accused me of cheating because the race would restart if I was doing badly, I tried to tell him that it was a glitch in the game but he wasn’t having a bar of it. I am sure the game was faulty as I repeatedly lost! As he had stayed with me it meant that he had some catching up to do but in no time he was in the paddling pool and armed with a water gun. It was really good to see them all playing together having fun. 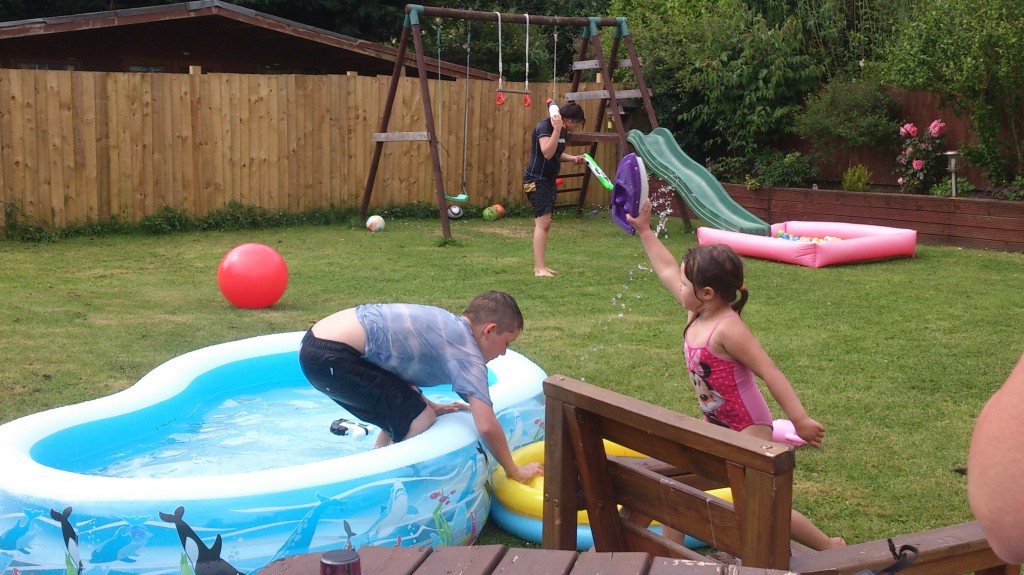 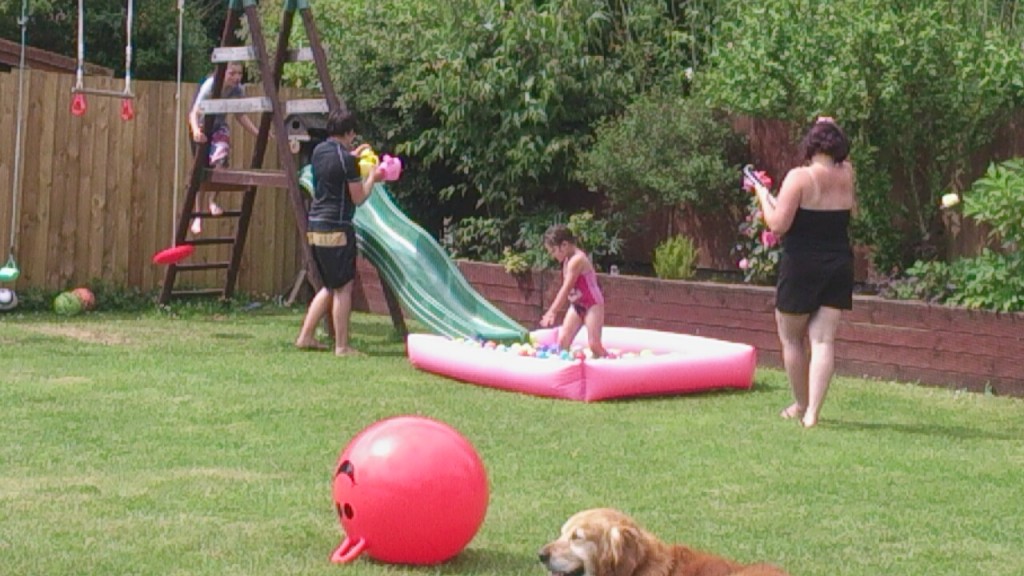 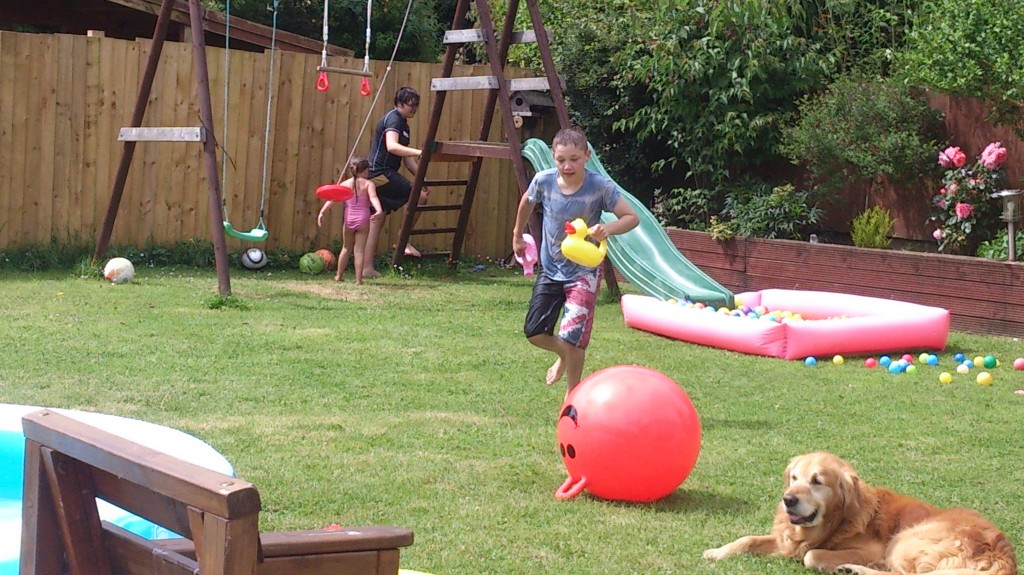 In amongst the throwing of water, and attacking each other with water pistols I was given some cards and presents, and they were excellent as I have excellent kids! 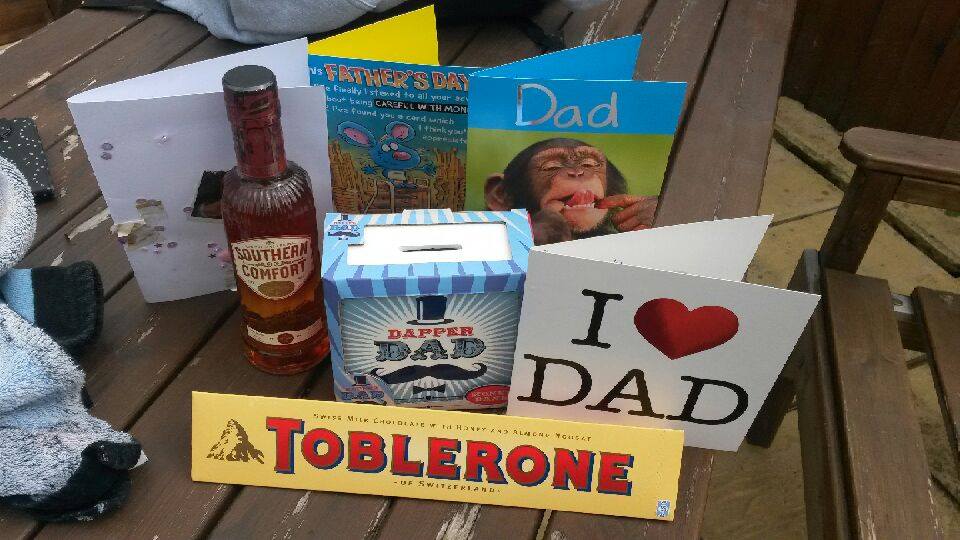 As the weather was so nice the rabbits were let out to run around the garden, “Pickle” was really happy with this and spent some time playing with “Honey”. 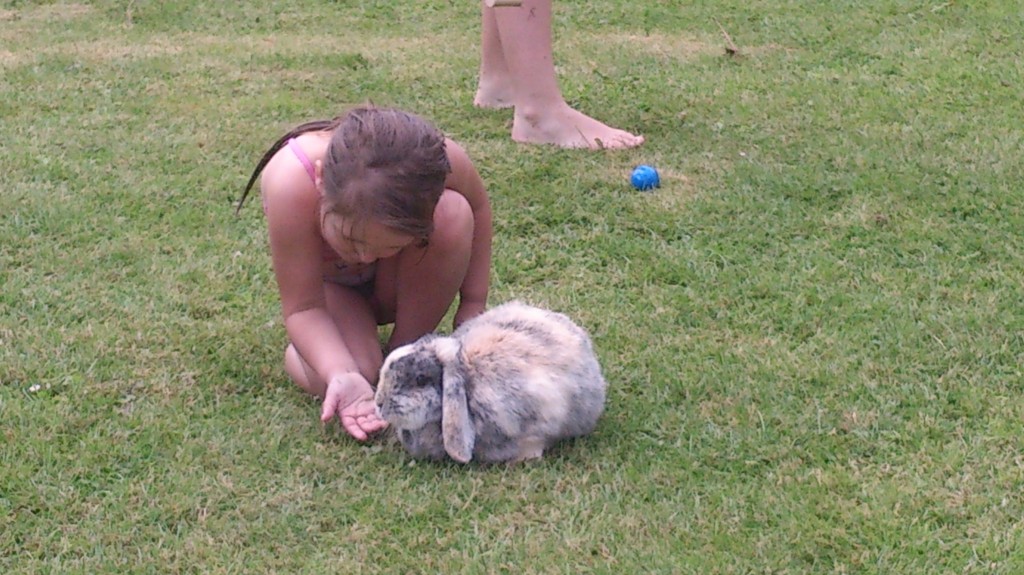 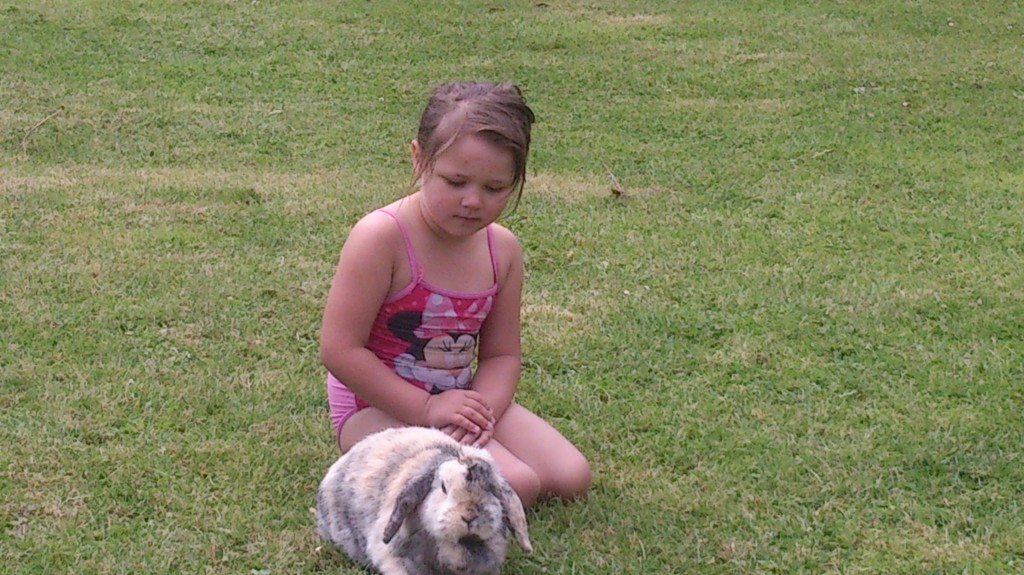 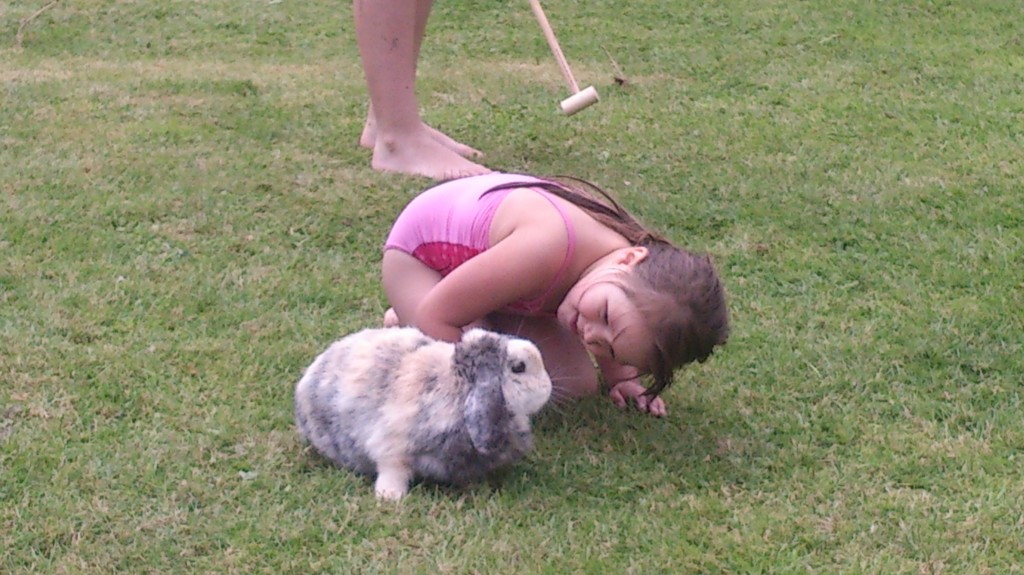 At around two in the afternoon I headed back to my bungalow having had a fantastic time with my kids. For the last hour, the four of us sat and played garden dominoes. Large wooden dominoes that my Wife had bought for them to give them something to play in the garden in the good weather. Believe it or not, “Pickle” somehow manages to win more times than not when we play which just made us laugh in disbelief!

I returned to my bungalow to do some bits and bobs and I had a visit from one of “Team George”. Hannah, who was part of the team that had worked with me on the adaptive skiing course back in March in Germany. She had got in touch with me as she would be in the area and she had asked if it would be ok to meet up. It was nice to catch up with each other, and to share what each of us has been up to. As she will likely be in the area several times we spoke about her popping in occasionally and the possibility of her accompanying me on a bike ride as I am not going to be going on my own until I am more confident, if at all to be honest as I am not able to get back out of the hand cycle for a culmination of reasons. She stayed for three or four hours and then finally had to head off, leaving me to finish up the few things that I wanted to do before heading off to bed.

My good friend “Jim” agreed to drive me to Tedworth House yesterday (Monday). I needed someone to drive the “Chucklebus” as I had been asked if I would take the Overlander in to show the residents of the recovery centre and talk to them about things I have done and intend/want to do and offer them the chance to ask any questiuons. We arrived and “Jim” got me out of the “Chucklebus” allowing me to go and ask the reception desk to let Jenny know that we had arrived. It was here that I bumped in to Lee, wonderful, hard working Lee. I was really glad that I had bumped in to him even if it was only a short “Hello” as I have come to regard him as a good friend. I would love to be able to afford to travel to catch up with him more often but at the moment it is not possible however that is not to say that it may not change in the future. Having said “Laters” to Lee I went back outside and in no time at all Jenny came out to greet us in her usual larger than life way and very shortly after we were also joined by Ian and Rob. It is always great to return to the house as the staff talk to you as if you have never left, obviously there is always lots to catch up on with each other but you never feel like you have been away for any period time as they make it so you almost continue any conversation that you had been having just before you left which is great. Amy came out to see me and after a very short chat it was time to take the Overlander in to the library which is where I would chat with the residents, we decided that Amy would drive it in which she was very hapy with and after Jenny and I had taken the piss out of her for a short while and Jenny had got “Jim” and I an all important cuppa, we all headed in to the library.

I banged my gums for probably 45 minutes or so and answered a few questions that came from the residents. It was nice to talk to some people about what I had been up to and things that I wanted to do and that it may mean something to at least one of them. I have never claimed to be an inspiration, nor do I expect or more importantly WANT to be referred to in that way as I am not. I am a person, a person who has had an accident and has ended up unable to walk which truly is the tip of the iceberg believe me. But I have lost family, friends and associates not just in areas of military conflict but also in road traffic accidents and through ill health and it is likely that those people would like to have the chance of life even if it is in a wheelchair which is just one reason why I crack on, the reason why I want to try to do different things and if that can give people a kick in the ass to motivate them then great but it’s not being an inspiration, it is simply giving people a wake up call that there is more to life than letting life beat you.

After the chat in the library, the residents headed off for some lunch, I left the Overlander in the library and headed outside as I had been asked if I would mind taking part in an interview. You will know by now that my logo is “Giving Back!” and this is not limited to money. Sometimes giving time is just as valuable and so I agreed to the interview and as such they can use it for what ever purpose they feel fit. With the interview finished we went back inside and Amy took “Jim” and I to the servery for lunch where we sat and chatted some more before returning to the library where a few of the residents asked about the Overlander and some of the things that I have been doing and was trying to do. I had one of the guys drive the Overlander out to the back of the house where the gardens are and a few of them tried it out while we spoke more and more about my `challenges` and it gave me a chance to talk to them about the house and things that they have been up to. The great thing about the military is that you can just talk, you will all have at least one thing in common and so striking up conversations is easy. I chatted for a while with a guy from 1 reg AAC which was ironic, and also with some more of the staff. Amy from the BoB crew was present whilst the interview was taking place and it didn’t take long to find Steve either. We had a good chat where I ran some ideas past him, ideas that I had shared with Ian and again it was great to talk to them.

I took the opportunity to show “Jim” around Tedworth House and the recovery centre’s sports rehab facilities. It was at the Skiplex that Lisa was working with a single amputee who was adapting to skiing with his prosthetic leg. I think “Jim” was quite taken aback by the facility which was good as he has seen first hand what the donations made to H4H fund. It was great also to chat with Lisa who I had not seen since my last visit, visits which are infrequent. I will be staying at the house again shortly though and whilst I won’t be there all day, I will at least be able to catch up with these people again. Whilst in the sports buliding Rosie and Emma, who were on their way to a meeting, poked their heads in to say hi and asked how long we would be around for as they wanted to chat and also to see the Overlander. I had spoken about the Overlander whilst I was in the house before and they were excited about seeing it if I was able to get it to the house. The invitaion to come up to talk to the residents provided that opportunity and as such all of the staff were interested in seeing it.

I had just finished giving “Jim” the tour of the place when Rosie and Emma emerged from their meeting and we headed out to the Overlander. Rosie was like a big kid and couldn’t wait to get in and have a go at it, purely for reasons of “research” you understand as she is an Occupational Therapist and it is therefore of utmost importance that she is able to offer residents that may benifit from such equipment or who may ask about such equipment, information which she is able to give from experience. (That should be justifaication enough in case anyone saw you playing on it, no, testing it Rosie!). 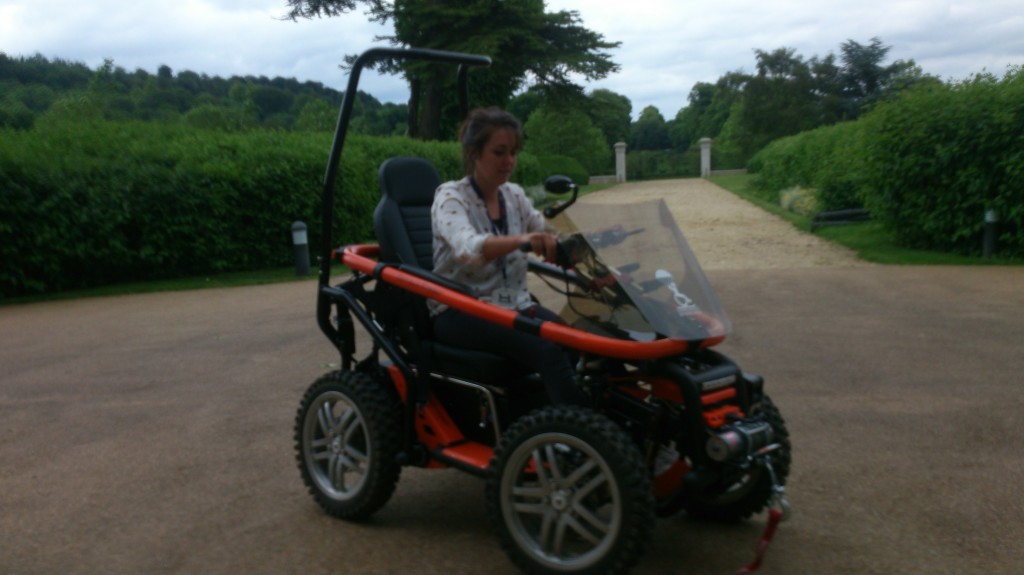 It was around four o’clock before we got away from the house which was somewhat later than we had been expecting but traffic was unexpectedly good on the way back which meant we got back to my bungalow in good time.

Today the work started on the inside of my bungalow, the extractor fan has been fitted in the bathroom and I am waiting for the gas engineer to arrive for the annual inspection and then other works will be continuing this week. The SCI Owners Club has got busy too which is amazing. So much going on, it’s great, I actually felt tired yesterday!