My Brother drove us to Ferndown today to go and visit our Dad and collect our Step Brother and our Nieces to come down and watch the carnival in Ilminster tonight. My son and my Nephew went with us whilst my Daughters went with my Mother in Law and my wife to Taunton shopping. It was nice to catch up with my Dad and it was also a bit of a test to see if I could get in to and around his bungalow. We spent the time chatting about how I was doing, how my wife and kids were coping and then we got on to the subject of my model building. I told my Dad which model I had been building and how it was coming along and the other models I had bought ready to build. I mentioned a Sea Vixen kit that I had seen and should have bought but didn’t and that I wished that I had. It is a bigger scale than I have been building but that the detail would be so much clearer. With that, Dad lifted a model from on top of a display cabinet in the front room and showed me a model he had built. It was the model Sea Vixen I had missed out on buying and to be fair, he had done a really good job of it. The best thing of it was the personal touch he made. The model came with decals for several squadrons, he showed the tail of the aircraft model and pointed to the marking, I recognised the insignia and said, “That’s your old squadron ain’t it? I’m sure you had a tie with that on.” I was right, and when he showed me the decals he had not used, I recognised those to be of a squadron from Yeovilton which used to be Harriers until our all knowing Government got rid of them all. He showed me a kit he recently bought as well, a small compressor and air brush kit for painting the models. This is something else I would like to buy later on as I get better at the finish of the model building itself. Then I want to perfect the air brush painting as it will give a much more realistic finish. I’m proper getting in to this hobby now.

So we got back from Ferndown and my Brother went back to his place, we would all meet up in Ilminster later for the carnival. So me and my tribe and my Step Brother and his two children loaded in to the Chucklebus and the Mother in Laws car and we headed over to meet up with my Brother and his tribe. We found a spot that was clear of people at around 19.00hrs next to the Chinese at the Triangle, in front of a large HGV recovery wagon that was in the entrance to the car park. This was ideal, a good view for the kids and opposite the chip shop if they were hungry or thirsty. Half an hour we waited patiently knowing the carnival started at 19.30hrs. Around twenty to eight some more people stood next to us, the roads were filling up with people and it started to resemble the carnival atmosphere. Not long after this we could hear music, the kids became excited and were telling us that it wouldn’t be long before we would see the floats. Sure enough, the lights came round the corner and we were all set to watch the float come up the road towards us, that’s when this happened…. 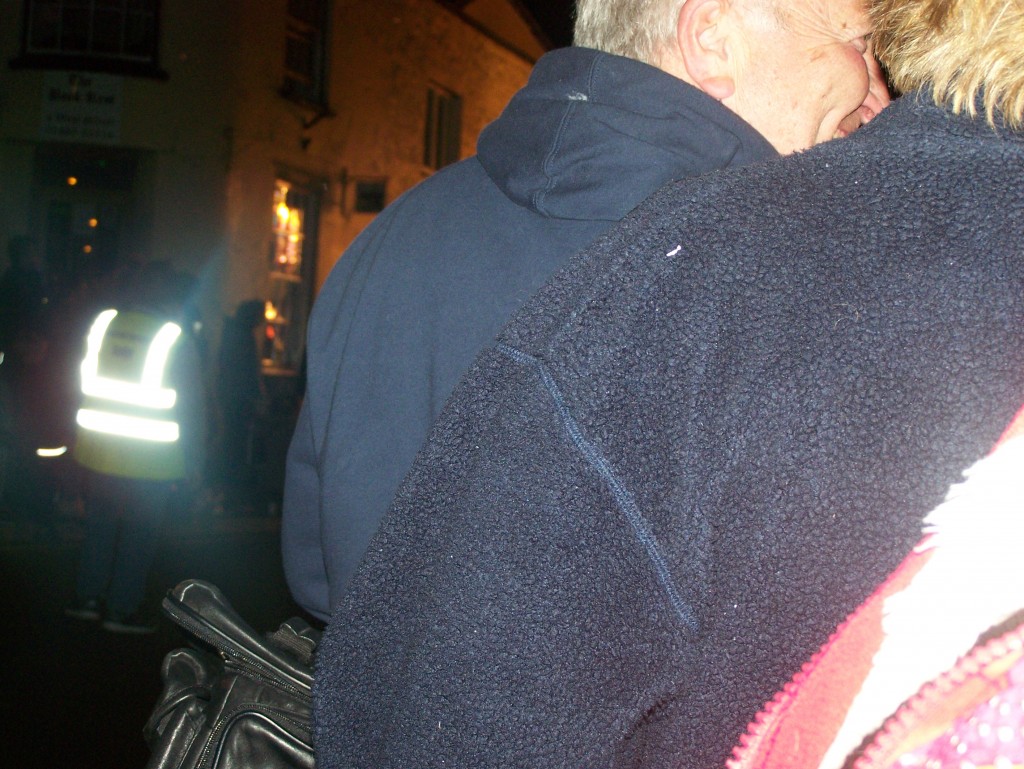 Now the fact that they stood right in front of my wife was one thing, but stood at the feet of my wife was my youngest daughter aged nearly three. It doesn’t take a rocket scientist to figure out that she would not be able to see. Furthermore, they had made eye contact with me several times so were well aware of my being in a wheelchair. My wife asked them if they would mind moving back, which they ignored. She pointed out the fact that my Daughter could not see, and it was ignored. Needless to say this p****d my wife off a touch and so she pointed out the fact that we had been stood here for over half an hour because it had been clear of people which meant that when people did eventually decide to stand here, the kids and myself would be able to see, that is unless of course the people who decide to stand there are so ignorant that they believe they are the only ones on the planet. The guy obviously had delusions of grandeur thinking he was some kind of Spielberg with his video camera, taking video of his friends watching the carnival whilst he denied others of the view which we had come to see. I do not expect special treatment, (although the occasional free parking is quite cool!), but I can not and will not tolerate inconsiderate and ignorant a**holes. You would not believe how many people ignore you because you are not the same height as them, or how many people will talk to the person you are with rather than ask me. “So how is he doing?”. “HELLO! I’m right here you know, I can speak!!!” I went for lunch with my Brother in Law and his girlfriend a while ago. We went to the till, I was obviously in my chair, they informed us of the total and I handed the money over, what happened next did not impress my Brother in Law OR his girlfriend, they gave the change to him and not me! True story.

When I am out and about, I want people to talk to me. It’s nice to catch up with people and find out how they are and what they’ve been up to. More often than not though I have to reverse my chair from them a couple of meters. This is not me trying to get away from the conversation but merely allowing me to see who I am talking to without causing me to have a bad neck. A lot of the time it is people who you don’t know as friends but they stop you to talk, which is really nice that people are interested. It is however, through no fault of their own, a bloody nightmare trying to get to a position whereby I don’t get a bad neck having the conversation. Before I had my accident I didn’t think about it, but because of this I try to have enough of a gap between myself and the other person to not have to look up so high. I have lost count of the amount of “cocks” I have spoken to since being in my chair, and I am not using that word to describe a person. I spend a fair bit of time talking to peoples private parts if they insist on closing the gap when we are conversing.

So tonight I would ask you to try to remember, when talking to someone in a wheelchair, try to give a bit of a gap so that they don’t have to tip their head back so far. While you are having a conversation, LOOK at how the person is when they are talking, do they look uncomfortable, do they keep dropping their head down then looking back up again. If they do, then this would be a good combat indicator that they are straining their neck to talk to you. Move back a little or see if you can “perch” on a shop windowsill, or better still, see if there is somewhere very close that you could sit down. This is not wanting you to feel as if you have to avoid talking to people in wheelchairs, it is just trying to educate the “walkers” about various problems that I have encountered which in hindsight I wish I had been aware of when I could walk.

On the plus side though, wifey stood up for what she belived to be right and we eventually got a clear view. 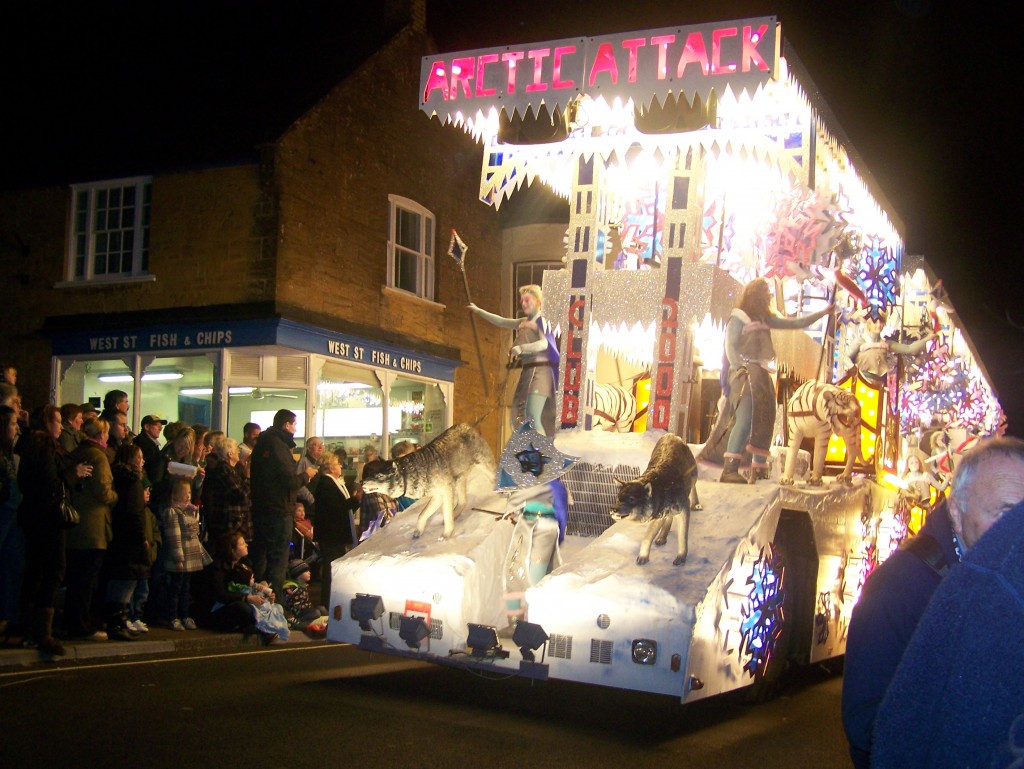