My first visit to the digging site.

Darren drove me back to Caerwent on Monday ready for the second week of Op Nightingale’s dig on CTA. The traffic was much kinder than on Friday when we were caught up in the traffic on their way to their holidays and as such it took a great deal less time to get there. I was hoping to catch the Royal Marine Cadets before they left after their weekend of training on the area but I had sadly missed them, the building that they had been using was not empty though, it was now inhabited with other troops who were training on the area. I needed to check that the area had been left tidily by the cadet unit which it had been as I had been under no doubt that it would be but then I noticed a problem. The extension cable which was powering our eating area had been cut leaving me with some problems to sort. We needed the power for the lighting and the Burco for the brews and the `Norgy’s` for hot water at the site. Then there was the problem of where the cable went to, I somehow needed to ensure we had power to that building before the rest of the group arrived as they would be needing food. I spoke to the unit now occupying the building which the lead had been plugged in to but they knew nothing about the missing wire. Unable to know either way I asked if we would be able to use the power socket in the building if we could make a new lead to which they said “Yes”. That problem dealt with I now had to find some cable.

Taff, my Chef, arrived and between Darren, Taff and I we searched for cable. Result, a reel of orange cable was found amongst the Op Nightingale stores, this was plenty long enough for what we needed; now we just needed a plug. Taff wasted no time and headed off to his home to get one and on returning it was wired up. The other end needed to be wired in to the socket end, with this done Darren and Taff set about feeding the cable from our building to the building which would provide us with the power we needed. Plugged in and routed out of the way of the occupying unit’s vehicles we plugged the lights and the Burco in……nothing. “Taff, was the fuse ok?” I asked and the reply was that it was a brand new plug which came with a fuse and so logic would suggest it was ok. Darren and I decided to check the wiring to see if there was a fault with this, it was not exactly as I had expected to find it, with the live hooked to the earth terminal it was a non starter from the off. We wired the cable correctly and plugged everything back in….success, lights on and Burco heating up. Taff cracked on with preparing the food and the rest of the group arrived, they then went up to the site to begin working, they would spend the rest of the afternoon digging and recording until evening meal. Taff did a fantastic job with evening meal again and once we had washed up the dishes and people had washed and got changed, we went up to the Coach and Horses for a relaxing drink and a catch up. I had nothing really to write about and so last night I did not hesitate in getting a slightly earlier night and was in bed with eyes shut around half eleven, get in!

This morning I woke bloody freezing, there is no one called bloody freezing in my room so what I should have said was I woke UP bloody freezing. In any case, I woke up bloody freezing which caused me problems. EVERY time I made a move I would spasm, consequently I could not get myself upright which in itself was a problem, just like everyone else first thing in the morning, I needed a pee, no pressure then! God only knows how but I did manage to hold it and finally managed to sit myself up and take care of my personal admin. I had slept really well and was looking forward to the day ahead, which was already a really good day. I had managed to get the right boot on in less than three minutes, I think I may have actually cracked it now, tomorrow will tell. With Breakfast finished we went back to the accommodation block, where the `diggers` waited until it was time to load on to their bus to take them to the site. Dave came in and asked if I would mind going to the Post Office to post a letter for him, this was not a problem for Darren and I to do and so we set off to do it. With this done we stopped in the Coach and Horses for a coffee and to quickly use the WIFI, I got to the door and was chuffed to bits when I saw this…. 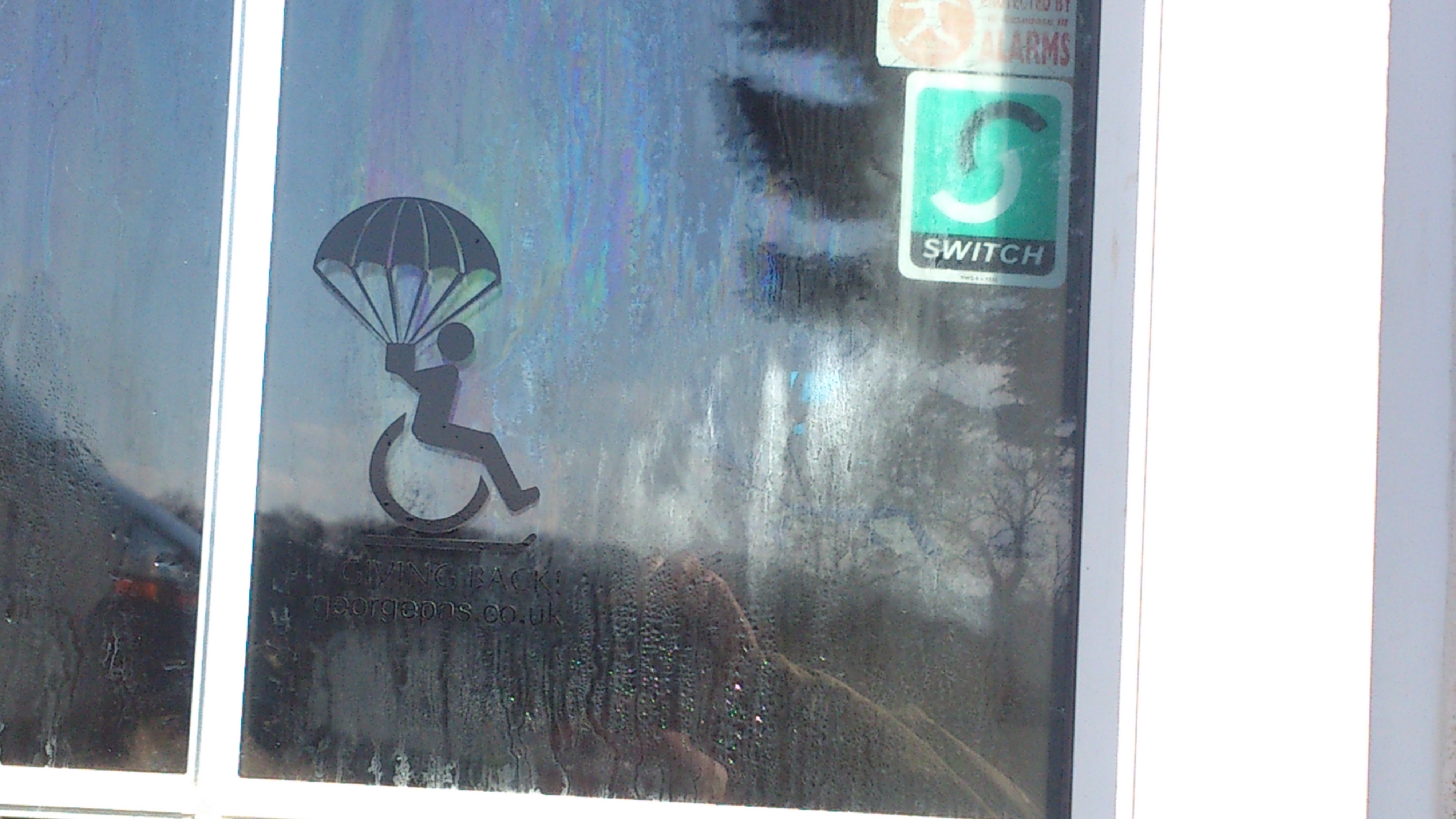 The landlord had asked me for a sticker and I was so pleased that after talking to me about what the sticker and my Blog was about, and about the fundraising I have done and want to do in the future, that he had put it for all to see on the door of the pub.

After finishing our coffee and finishing up what I needed to do, we returned to the training area, and got ready for everyone to come in for lunch. Taff did us proud with the soup again and with lunch finished and freshly boiled water given for their brews, they returned to the dig site. I changed my wheels and Darren drove me up to visit where they were digging. This is the first time that I have managed to get on to site and although I was unable to move myself around without help, between Darren and Harry I was able to visit each of the trenches and excavations. I was given a guided tour by Simon, a professor at the University, who also explained what was what, why they had dug where they had dug and the significance of different stone formations which was really interesting. I am not going to even try to explain but I hope that the group will furnish me with some of their own words explaining what they have done, what Op Nightingale has done for them and various other things so watch this space. For now though I will show you some of what has been going on by way of the photographs taken today. I have to start though with my good friend Dave, a picture which I doubt very much he will thank me for showing. 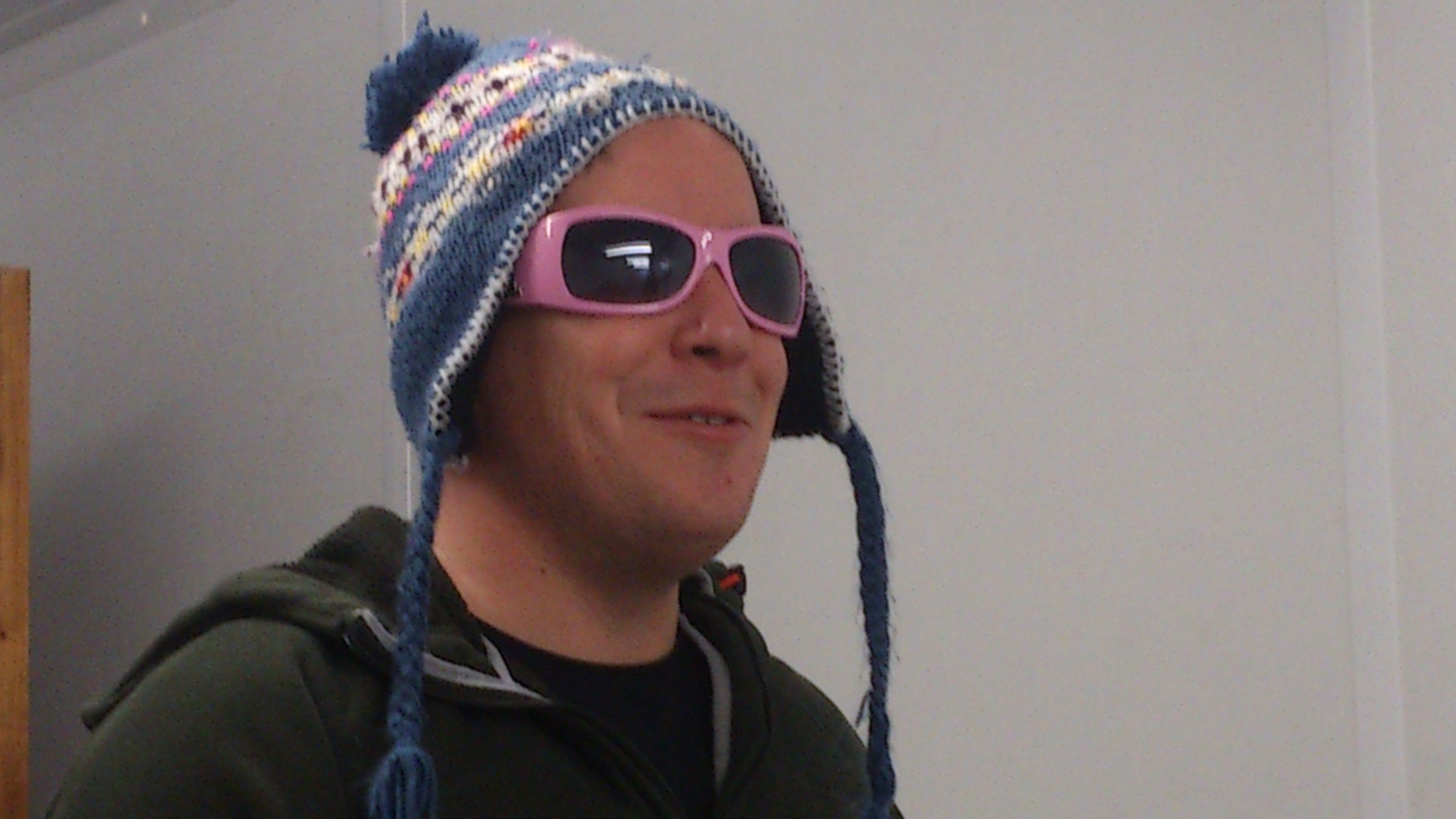 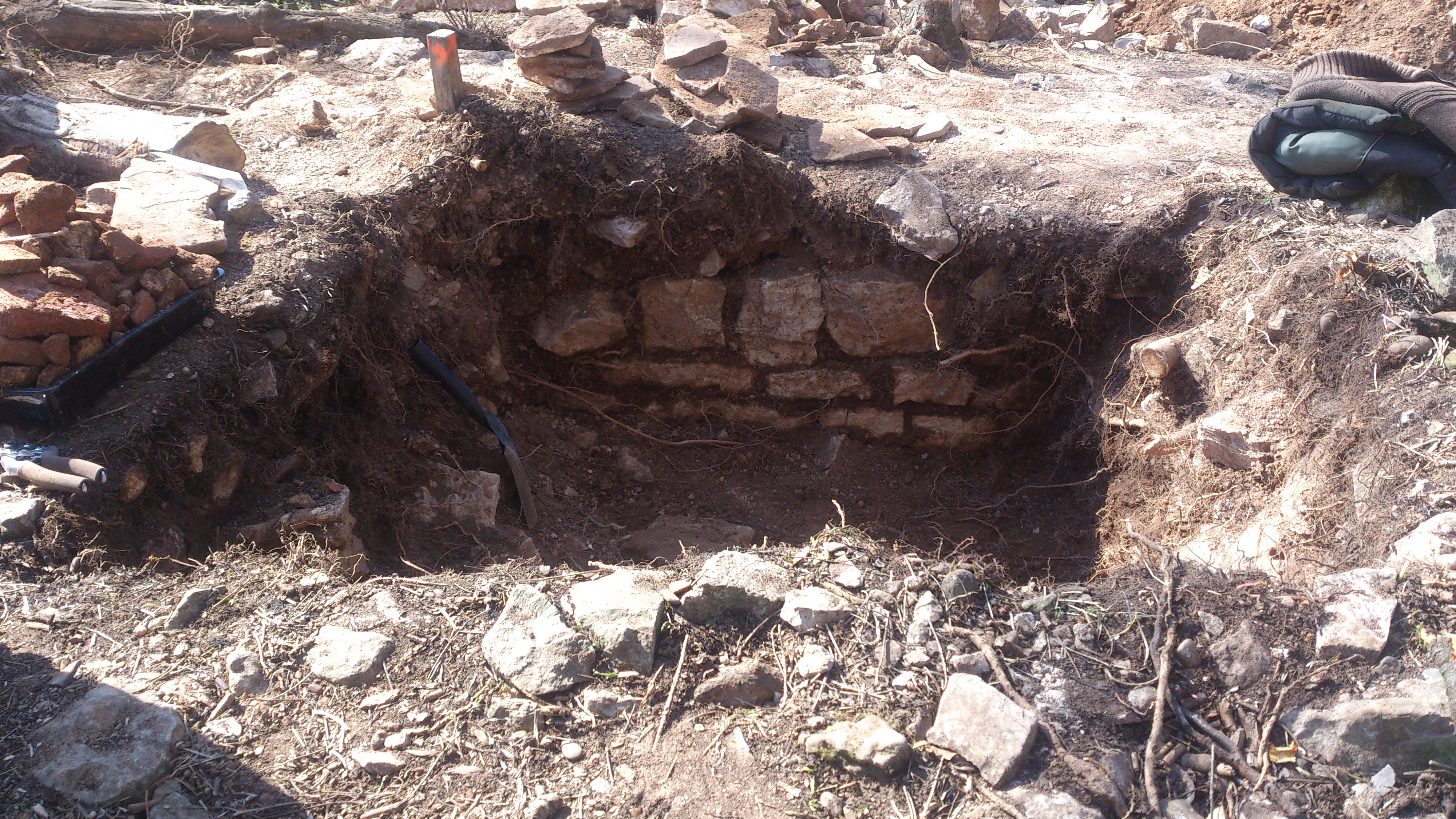 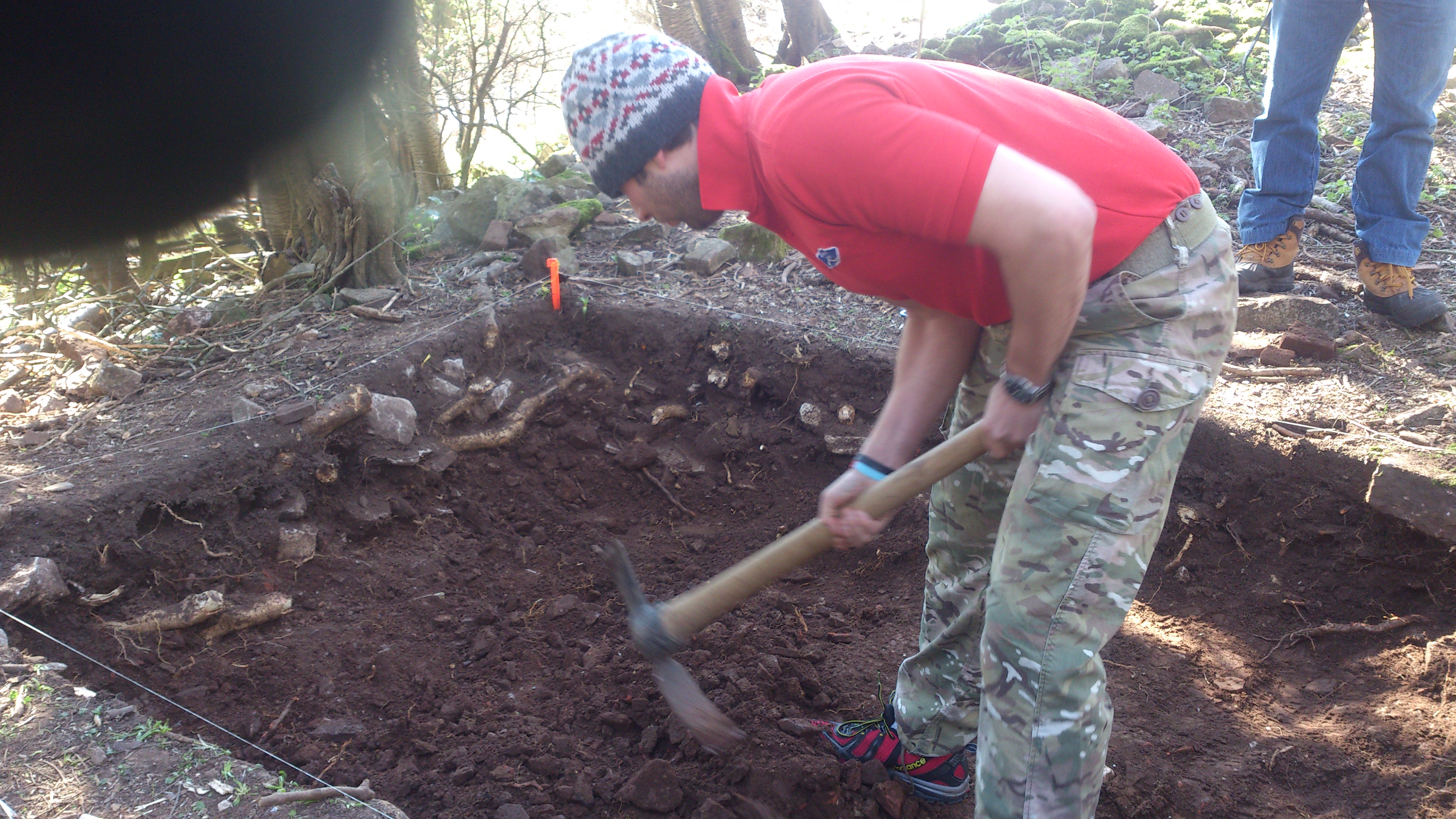 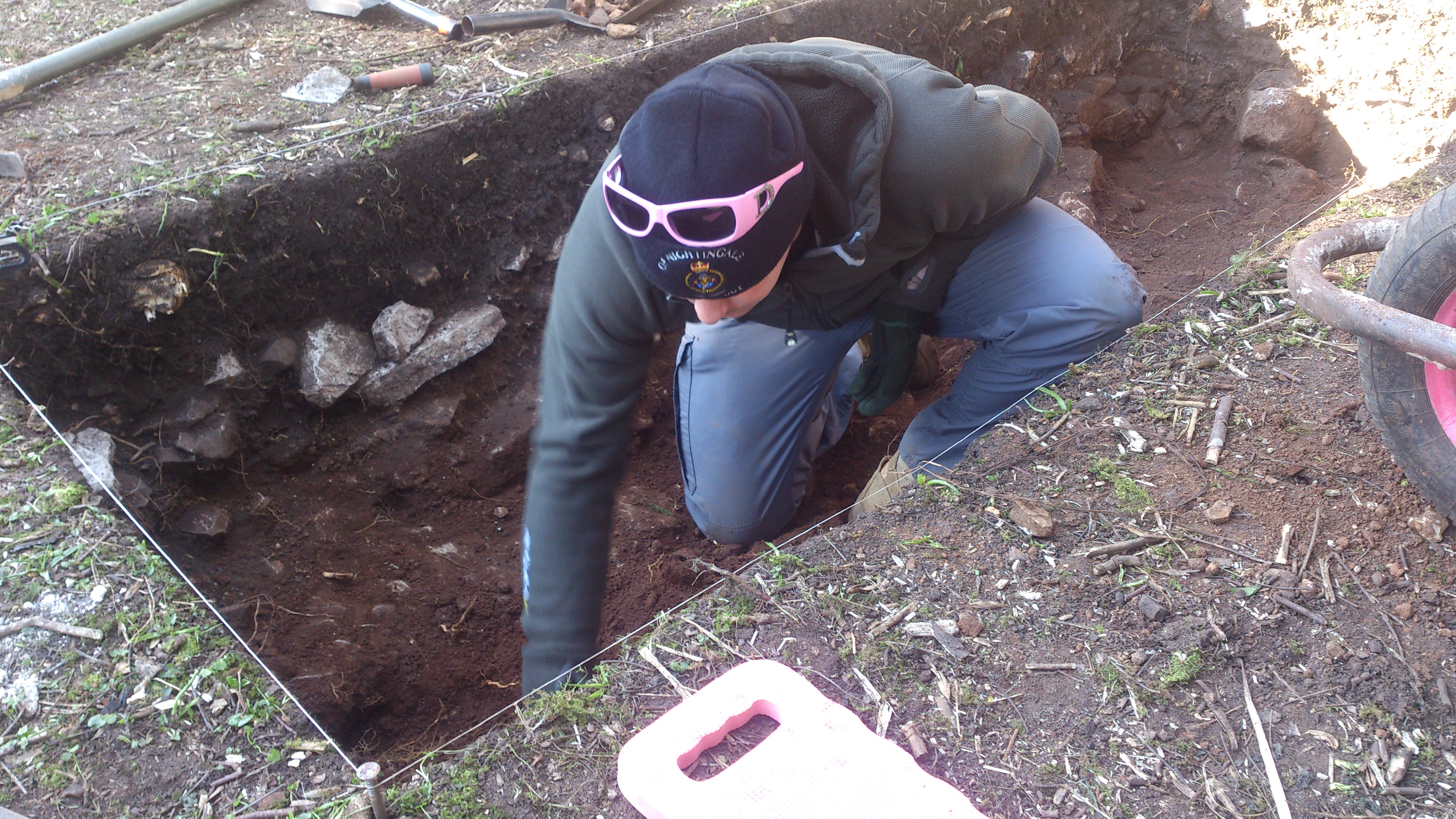 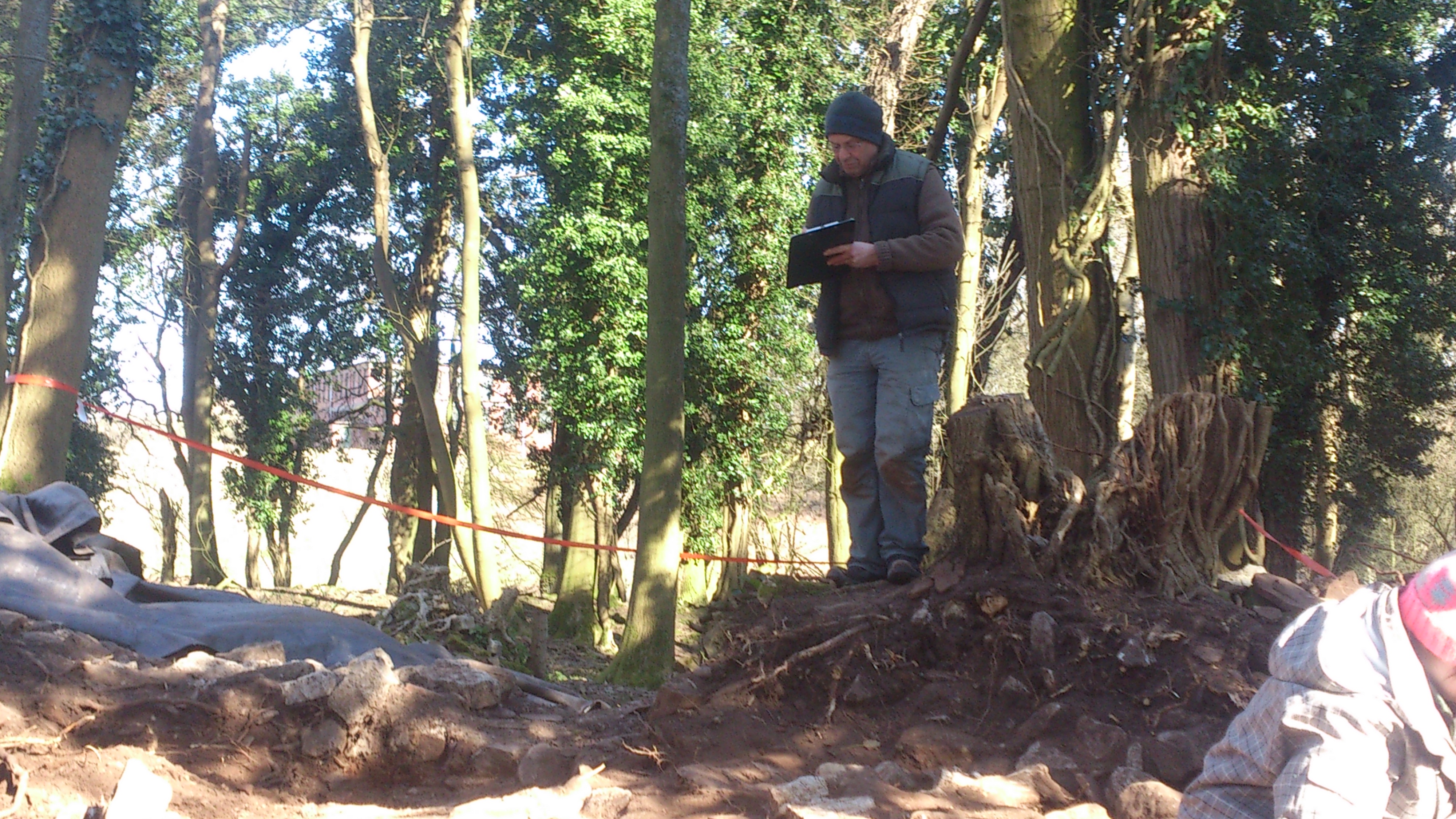 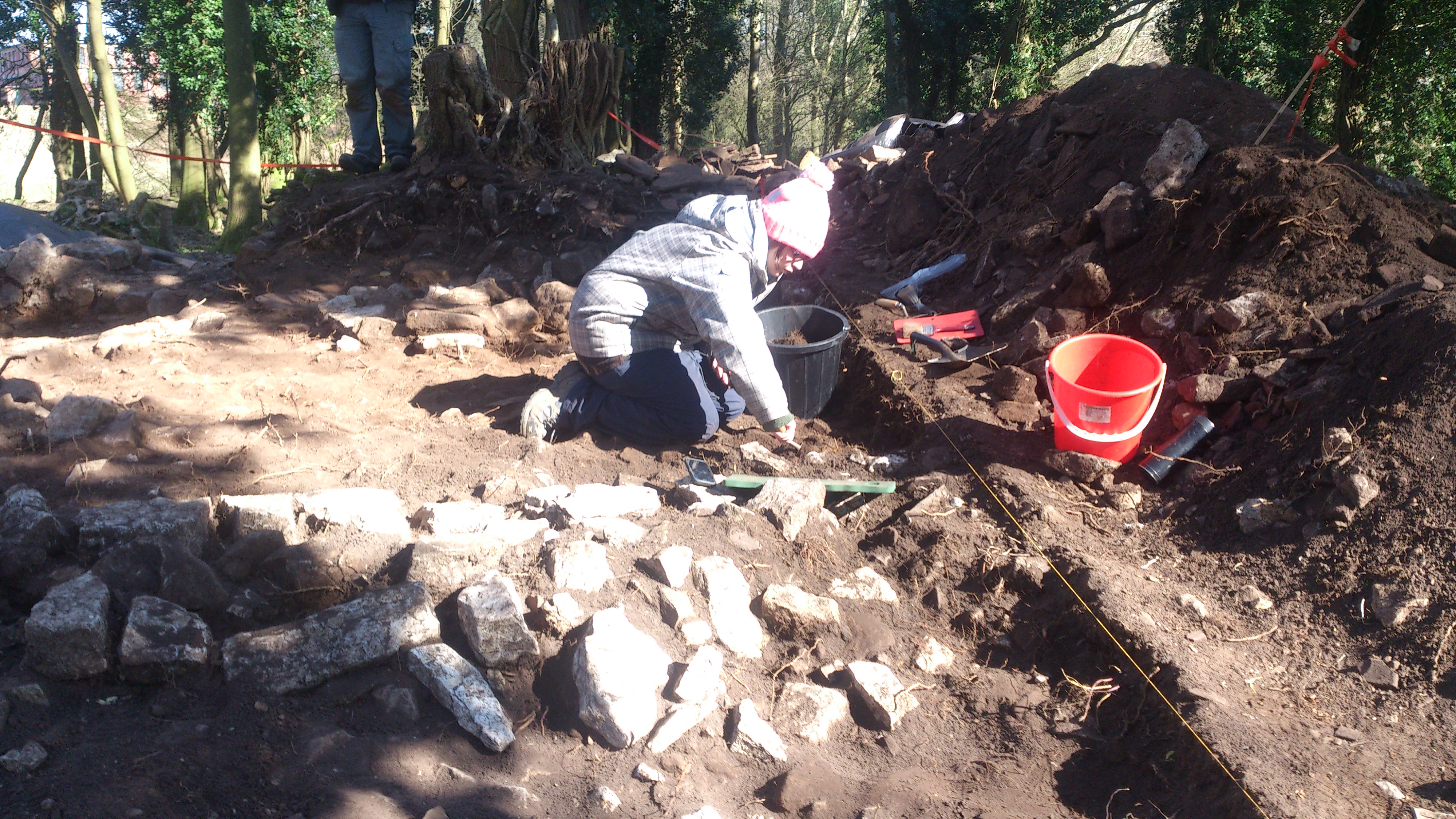 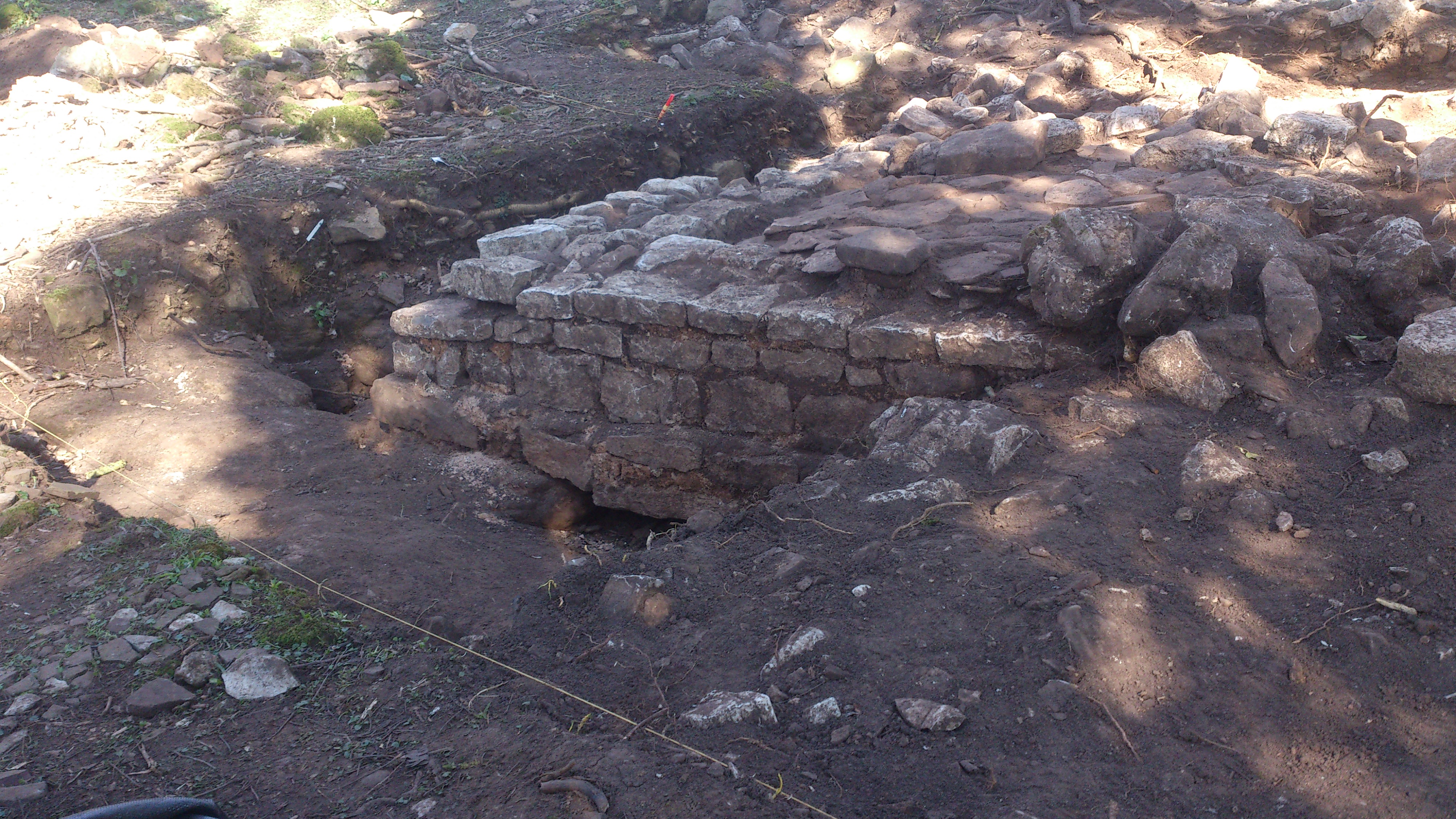 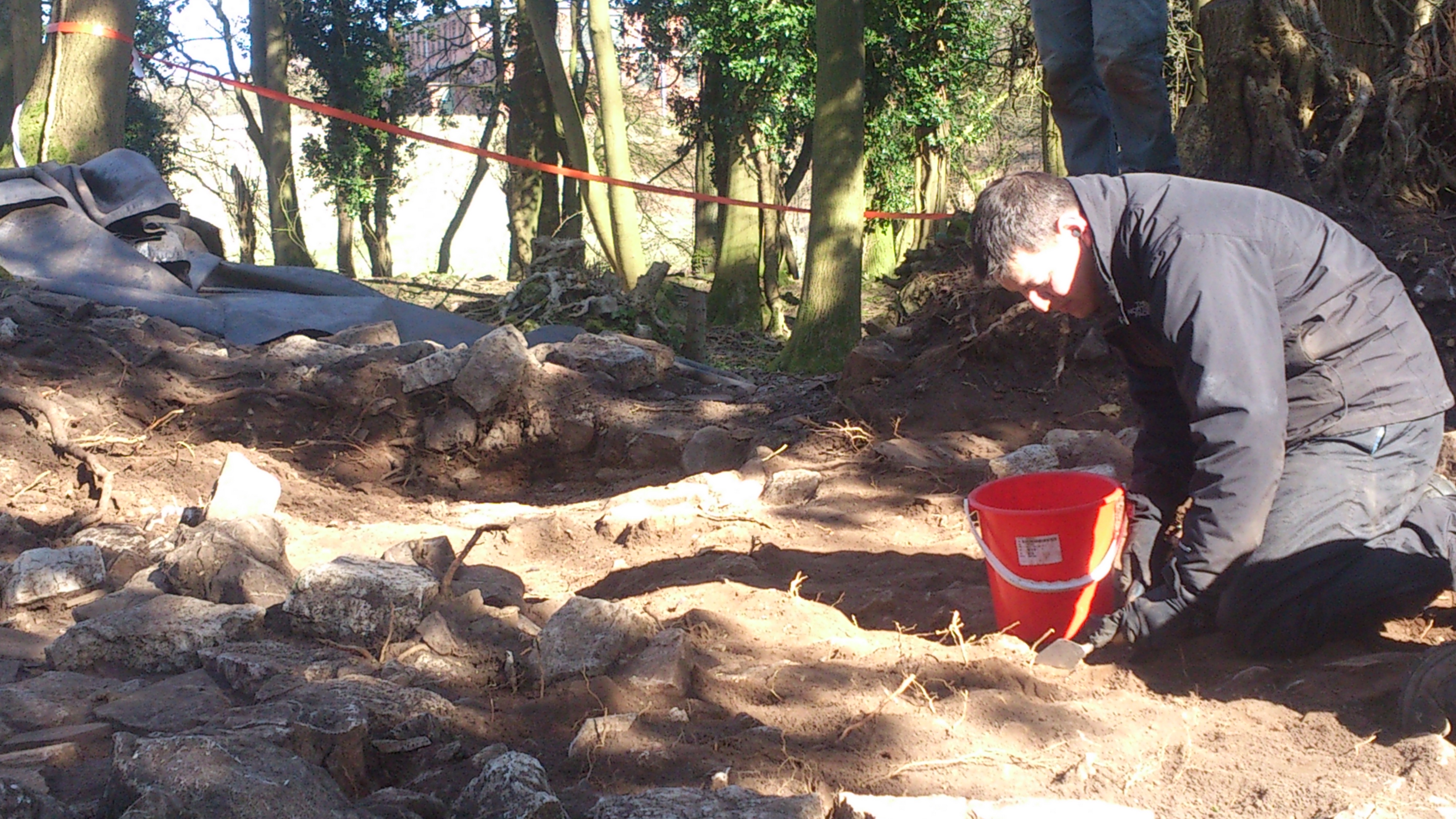 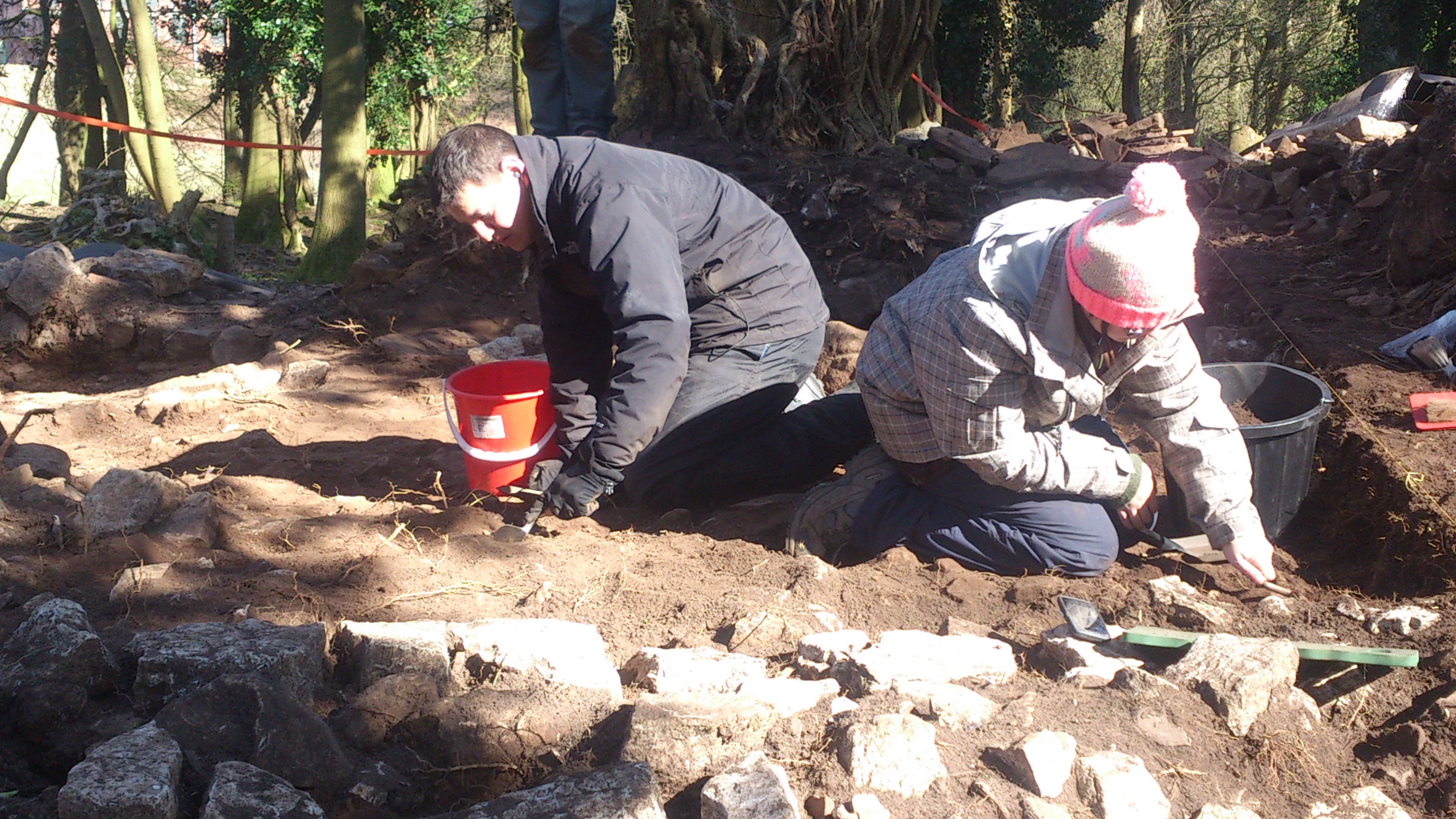 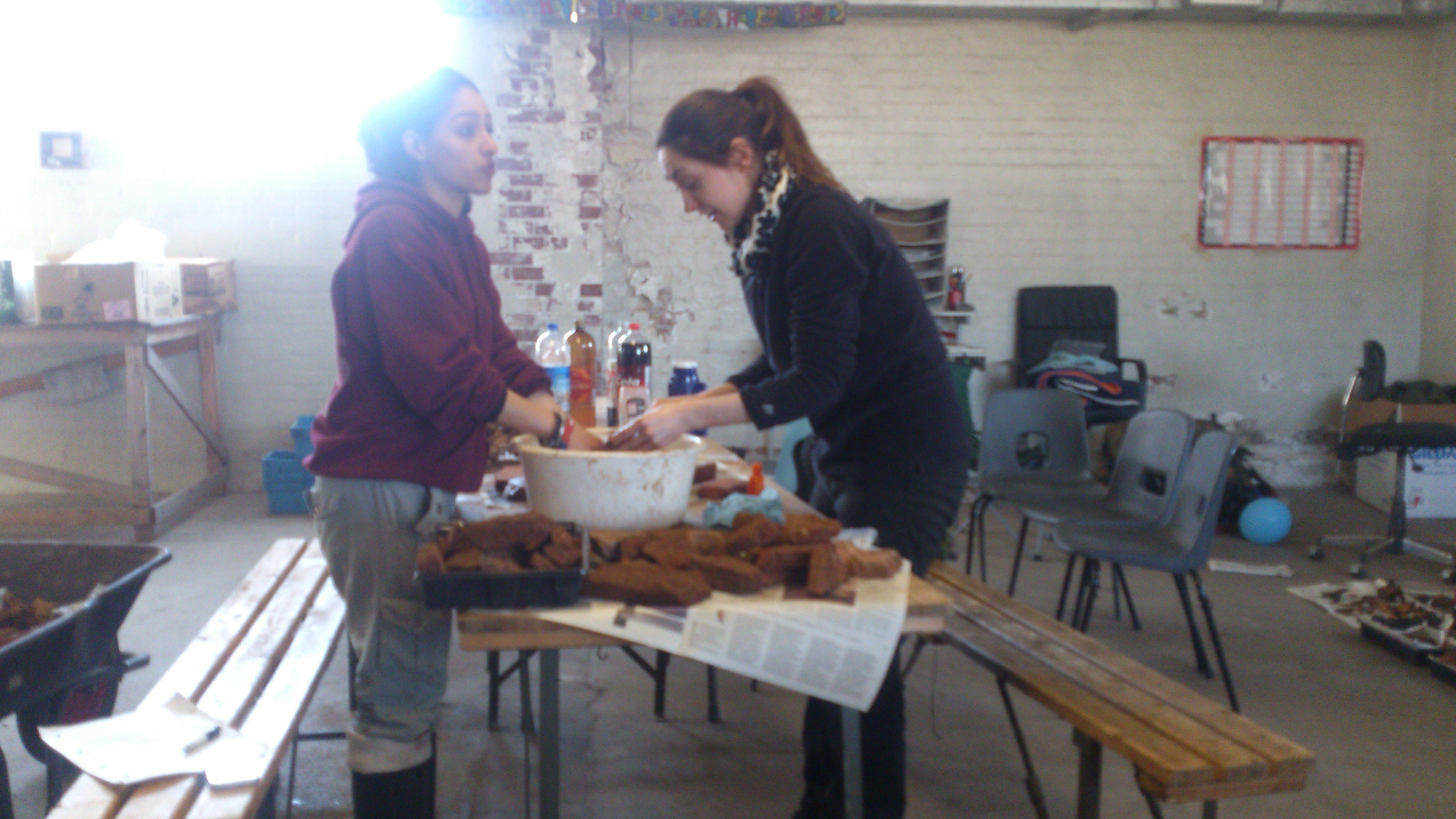 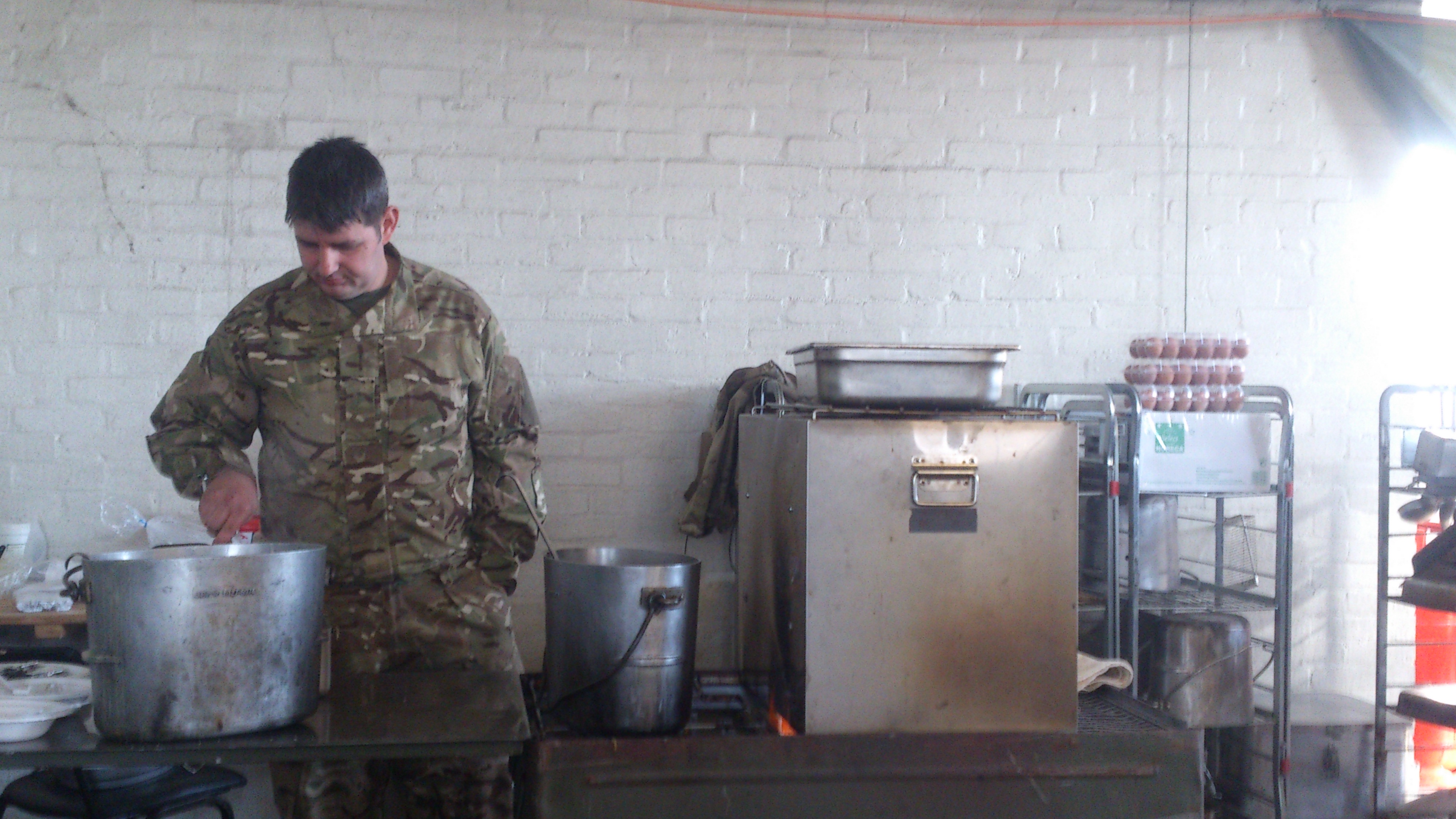 This evening Mike was telling the group of his archaeological background and experiences. I, as was many others in the room, amazed at some of the things that he has done and the places at which he has dug. He spoke of his hopes with regards to employment in archaeology and gave valuable advice to the students with regards to their degree work. It was really good to see how confidently he imparted his knowledge on to them and even better to see how interested they were. All in all a really good day today, and I hope that tomorrow will be much the same.