Last night my Wife and I travelled to the TA centre in Dorchester for the Serjeants Mess Christmas doo. Although I have been a Serjeant for a while this is the first mess doo that we have been to. It wasn’t something that interested me if I’m honest, I wanted to be a Serjeant so that I could work hard for my blokes, to be there to support them and to fight their corner if the need arose. The perk of this is obviously the Sjt’s mess. I have had a lot of time to think since my accident and I thought about the fact that I have never taken my Wife to experience the mess doo’s or indeed experienced it myself, and whilst I was thinking this it dawned on me that I had been ignorant since my promotion, ignorant in the fact that there are many people who despite serving many years will never get promoted to Serjeant and therefore never get the chance to experience a mess doo and that, mixed with the uncertainty of how long I have left in uniform, I felt that we should at least attend one mess doo to know what we had been missing out on. To go you obviously had to make a bit of an effort and so it meant that I had to treat my Wife to a new dress and that I had to leave the tracksuit bottoms behind for the night. 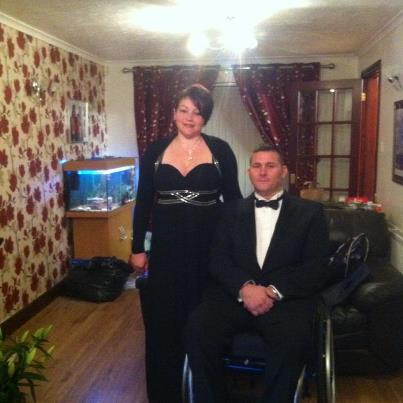 We arrived at the TA centre and immediately bumped in to the RSM who greeted us with a large smile and a firm handshake. It was really nice to see him, he had visited me a few times when I was in hospital and was a very supportive figure who would tell me of things that were happening within the training weekends so I kept an idea of how things were going. This also helped me as it kept me determined to get stronger so I could leave hospital and aim to get back in to uniform and attend training again. The RSM opened the bigger double door to allow me to enter the centre as the single door was not of a suitable size to allow me through, once the door was opened my Wife and I went in. Initially everyone heads up to the bar for a drink and a chat whilst waiting to be called to be seated before food. As this was upstairs and it would be only ten minutes or so before we would all be called I decided to wait downstairs in the foyer area rather than have four people lift me up to the bar. One of my friends did come down with a coke for my Wife though which was nice.

Whilst we were in the foyer area waiting to be called my friends husband, Rod, came to introduce himself to us. He too is a biker and had a friend who sadly did not survive a collision that had occurred. Rod is a cracking bloke, really nice to talk to and not short of a funny comment when the opportunity arose. It was really good to finally meet the guy as I have known his wife for at least ten years and I am hoping that they will both come round over the Christmas period for a coffee or possibly an alchoholic beverage.  Sure enough, ten or fifteen minutes after we had arrived, during which time we had met Rod and spoken with a few other people that I had not seen for over a year, we were called for dinner. The door to the main hall was opened and as my Wife and I were already downstairs we went in and found our seats. At no point did it feel as if we were in a TA centre. Baz had done an amazing job at transforming the hall in to what could have been mistaken for a functions hall in a hotel. Right down to a small glitter ball for the disco and mini chandeliers, it looked fantastic and really set the mood for the evening. Slowly the other Serjeants and their partners entered the room and took their seats. 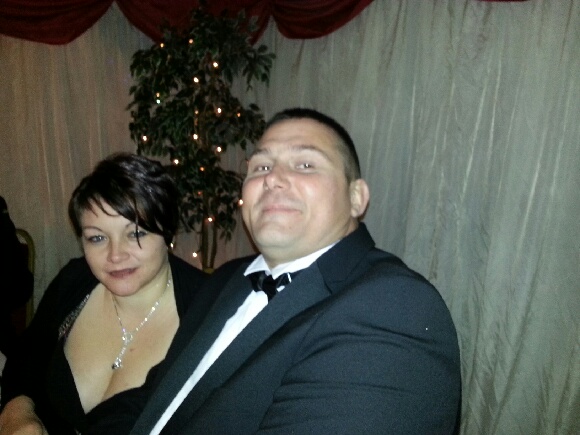 I did not recognise the names on the place sittings that we were with and so I sat talking with my Wife, as people filed in to the room the chairs on our table began to become occupied and we introduced ourselves so that we all at least knew names. They then informed me that they were senior NCO’s of the band, this meant that there was a whole different lot of conversation that could be had. I spoke with them about the concert that I had been to at the Royal Albert Hall to watch the Rifles band and they told me that some of them had played in that very concert, and that one of the females on our table had been the female who had played the solo Saxophone spot during the concert. They were lovely people who we had a truly pleasant evening with, not to mention a number of very funny conversations, an absolute pleasure to have met them and I hope that our paths will cross again.

After the starter, main course and pudding one of my closest friends came over to see if we had enjoyed our meal and to let us know that she had possibly had a couple of drinks and that she was a little tipsy, love this friend to bits, and both me and my Wife class her as a real family friend as do my kids. 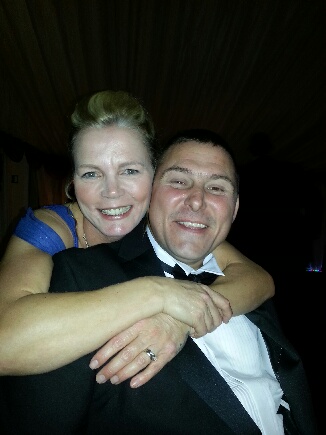 After the meal had finished I took the opportunity to talk with other friends that I have not seen for a year or more, it was good to hear what they had been up to and what courses they had been on and of course how things were going outside of the TA, I went back to our table for another glass of wine when I was approached by a familiar character who wanted a chat. And what do you know, I must have been a good boy so far this year as I was given a present. 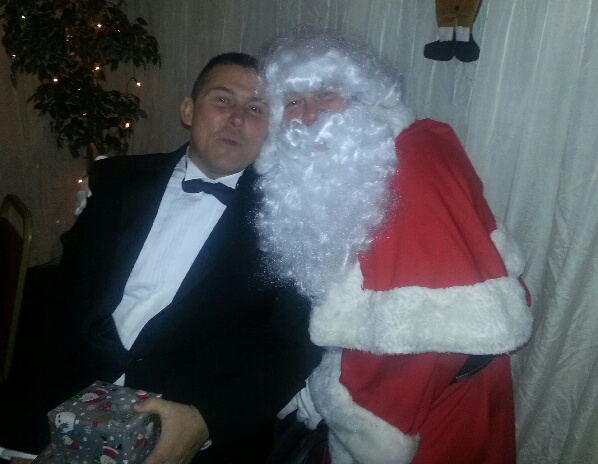 The evening continued in to the night until finally we had to leave. My Wife had to drive us home and my Mother in Law had work today, as she was sitting our kids at our house we did not intend on getting home too late with the intention of it being a reasonable time, although still not early, for my Mother in Law to get a decent enough amount of sleep before her days work. This didn’t quite go according to plan as it was around half past one this morning before we got home. It was a fantastic evening set in a beautifully decorated hall with delicious food and great company. The achievements of Baz and his staff for the transformation of the hall, the chefs for the beautiful food and the lads and lasses who waited on us and tended the bar should not go without a round of applause and thanks. Both of which I would imagine were done at the end of the night when we had left, so as we were not there to join in then this is where our thank you applause is made known.

It was around two thirty this morning before we got to bed and to that end a lay in was definitely on the cards. This was the case and it was around ten this morning that `Pickle` came to let us know that it wa time to start the day. Today we had promised the kids that we would go and choose a real tree and get the Christmas lights from the Mother in Laws to sort through with the intention of decorating the outside of the bungalow like we used to do to the in Laws place. Since the passing of my Father in Law this no longer happens and so we have said that we will do som e external decorations of our place instead. It makes it a bit more special and exciting for the kids, especially when it comes to turning the lights on in the evenings.

We went to a couple of places to look for a tree and finally we all agreed on one tree, which had taken a while believe me, the garden centre that we purchased the tree from had brought out at least seven different trees for us, the patience of a saint springs to mind but for all their efforts we bought our Christmas tree. 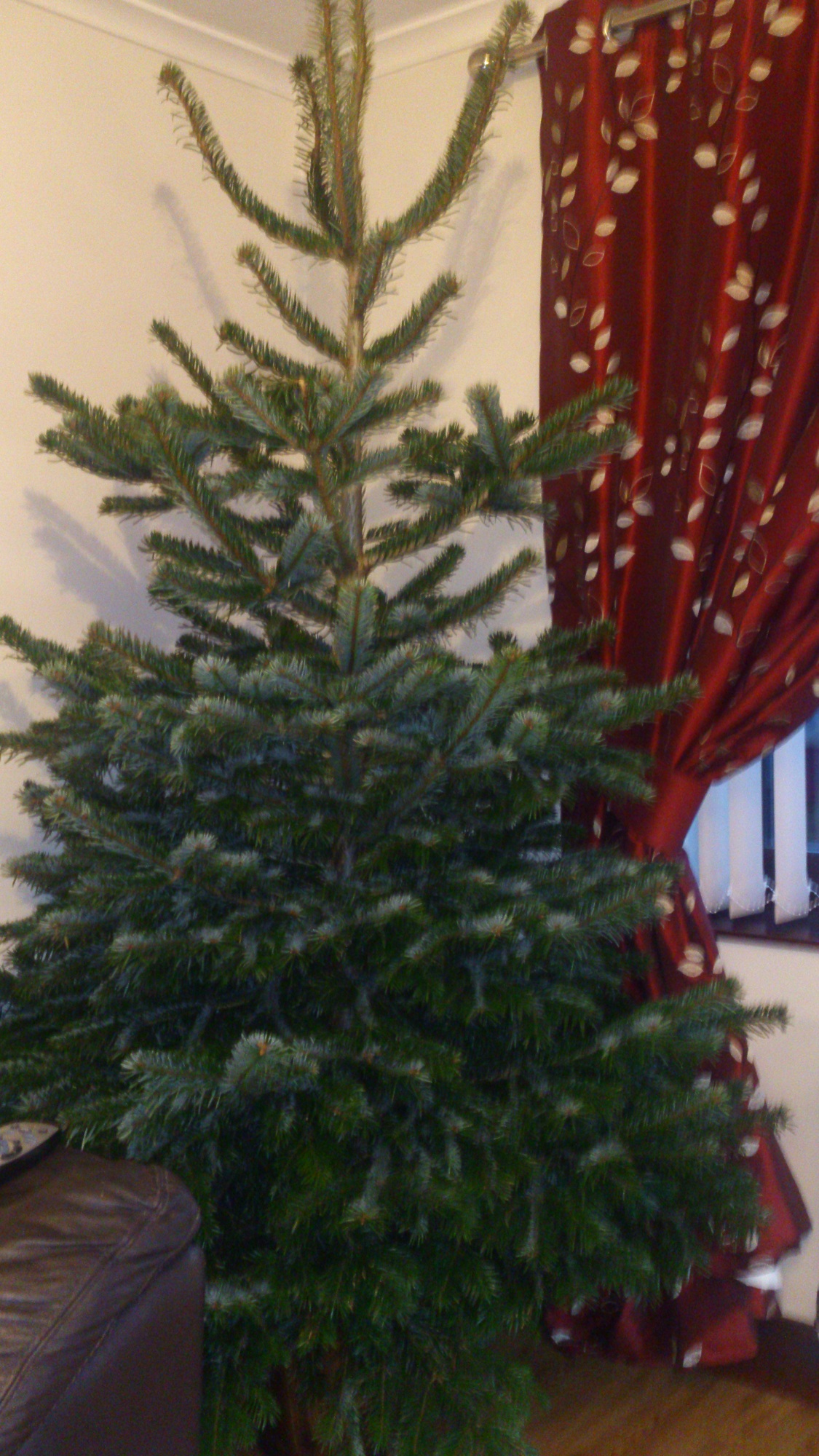 The next thing that had to be done was to sort through the boxes and bags of lights and check that they worked. Also then they had to be put in to seperate areas for ones we want to use inside, outside and those that we do not want to use as well as those that do not work, here is a small selection that took over half of the living room. 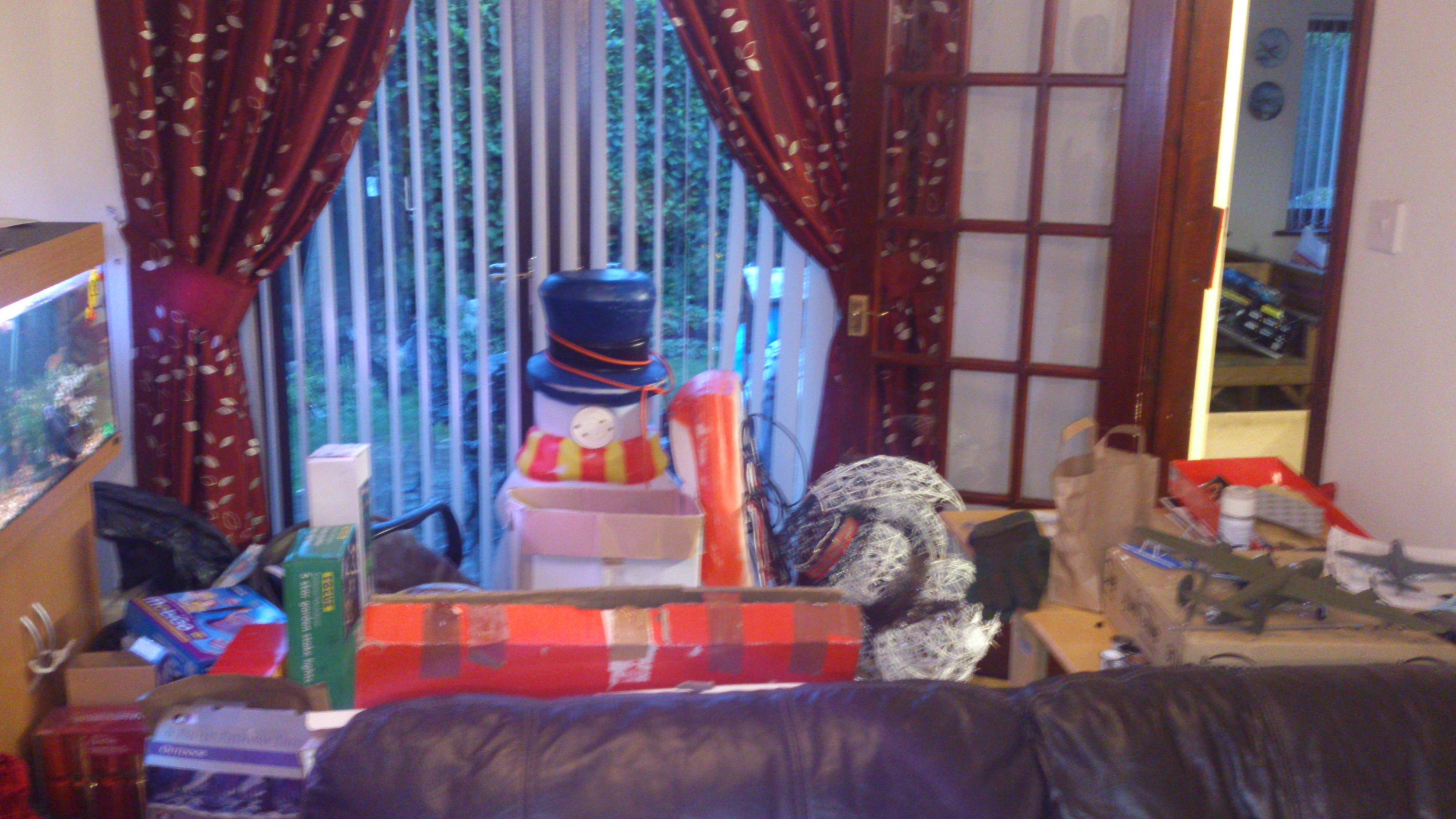 So once this little task was done it was brought to my attention by me darling Wife that this was only the stuff form the in Laws loft and that we had not sorted through our own lights and decorations yet, well there is something to look forward to eh?

Now the children are tucked up in bed and the lights have been pretty well sorted it is time for Wifey to work her magic and decorate the tree ready for the kids in the morning. It is just another thing that I am unable to do successfully in my chair, but to be completely honest it was never my strong point before my accident! I am looking forward to the tree being decorated, it is a little earlier than I would normally have put the decorations up but this Christmas I have promised will be a good one and will last for as long as we are able. Last years was very difficult and was only possible due to the members of the football team that my Daughter had been playing in, they did a sponsored walk to raise money which they gave to us to help with Christmas. As it turned out the money they gave to us was the only reason that my children had a Christmas, to that end this year was and is going to be a good one.

So as you all get your heads down to sleep my Wife and I will be staying up for a little while, Wifey will be decorating the tree and I shall be taking on the hugely important role of….supervisor”