It has just been normal run of the mill days so far this week, nothing to write about as such which is why I have not written anything since Sunday. I have done some sorting out of some boxes and we have had a day trip to Taunton. My Wife has been sorting through some things to put on to e bay and Darren and Tabatha have been spending time at the bungalow with us. My Wife started a bit of a fitness drive on Monday, kicking off with a ten mile walk and then an hours swim in the evening. I am really proud of her for diving in to it head first and I’m going to encourage her as best I can. I got the games console set up with the on line capability with the free one month trial and this has meant that Darren and I play against each other when Tabatha is at work or just when the kids have gone to bed. I don’t spend all of my time on the console, it is just something that I can do with Darren and slowly other friends.

Tuesday was TA, I went in to start finding out the new layout of the recruit training and to see when they are taught which subject, revision, what they learn on each weekend and to see what lesson plans had been developed. Gerry drove me in again which is good, I am fortunate to have Gerry living not too far away as he is happy to call round and drive the Chucklebus in for me. I’m really missing not driving myself obviously, but as long as I have good friends to drive me, it is not too frustrating. It is frustrating though, having to ask people to drive me if I want to go to different places, but as i said, it is not too frustrating. In the daytime,  I also telephoned my spinal unit to chase the letter I wrote to them requesting my transfer to another unit as I was not happy with the service at my current one. They politely told me that a letter had been dictated and that they would look at it and call me the next day to tell me what the letter was saying. No phone call as of yet, so I would like to think that I would receive a call tomorrow, as it is Friday and therefore the end of the week, but as the main reason I have requested the transfer is because I had received such little help, I am not holding my hopes out for the said call.

Wednesday did not see me and Alison undertake our normal `Wednesday walk` as she had to work, Darren and Tabatha, me and my Wife did go for a little walk to see if I would be able to get down through the cycle path as the snow had brought several trees down, with this in mind, we took a saw! 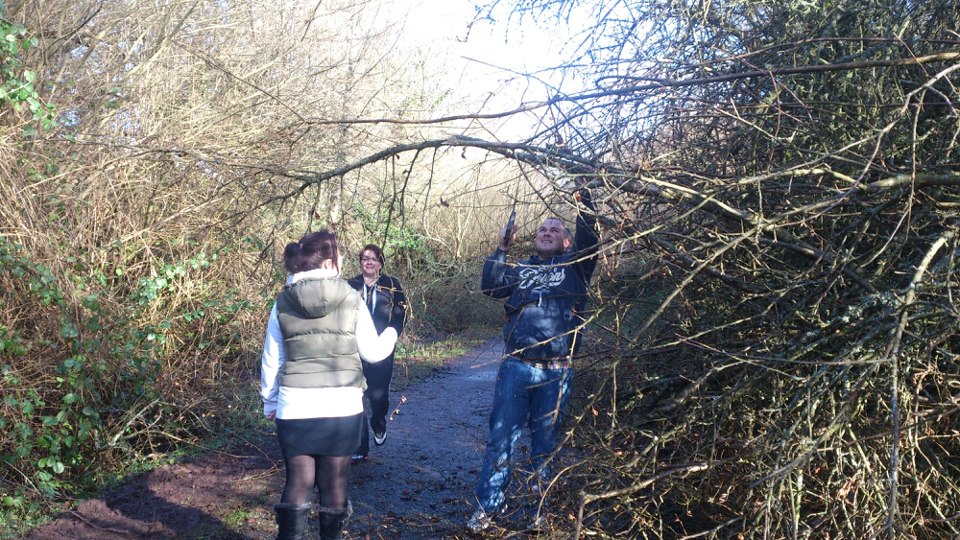 The first tree was not too bad and in no time we were through, this will be fine if any more are like this.   BUT….. 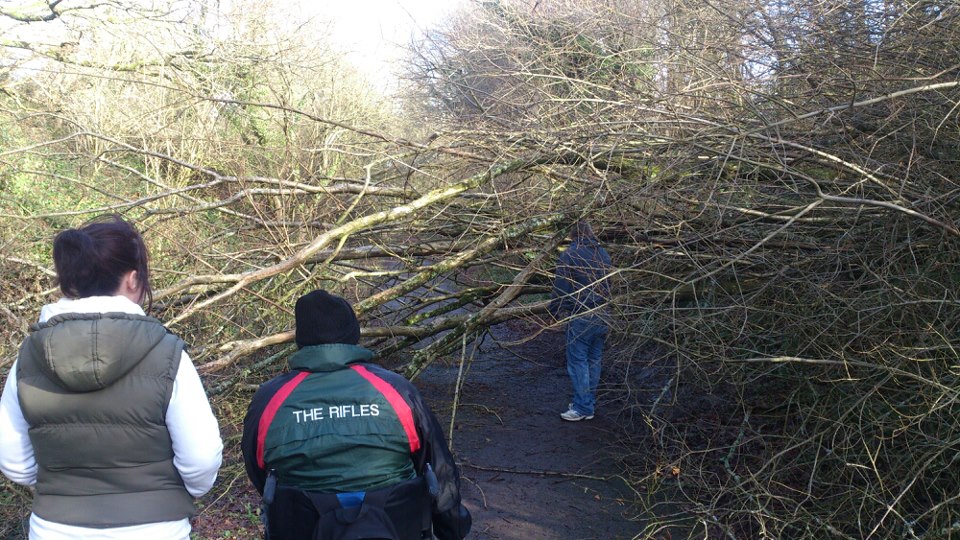 This was not going to be safe to continue with, out of camera shot, the tree root which was over a meter in diameter and heavy with soil was perched. The only thing holding the roots from falling on to the cycle path were the branches that we needed to cut. Wisely we decided to discontinue and we would turn back to the bungalow. I called the council office in Yeovil and informed them requesting someone clear the cycle path of fallen trees and pointed this particular one out by way of giving a location. They thanked me and politely told me that they would investigate who owned the land, (it’s a bloody foot and cycle path???), and then they would call back. No call yet so I am guessing that they are still investigating. My Sister in Law Sarah came round for a coffee which was nice, it’s weird now that the bungalow is pretty well sorted as my Brother and his clan were round loads, now that there is very little that we can not do ourselves now, he is squaring his own stuff away and so hence we don’t have the full house so much. It won’t be long before we hopefully get some better weather and then the BBQ will come out and it will be just like when we first moved in, busy. It was nice to see her though and hopefully we’ll all catch up again soon.

Today then was the day that Alison and I went for our `walk` or `st-roll` as she calls it, but due to my inability to get through or around the fallen tree, we had to walk the mile and a bit or so on the road to the next entrance to the cycle path. Today though, I had my “Freewheel”, I do not unfortunately have a photograph of it but it is a single wheel on an arm that I attach to my modified footplate and when I roll forwards, it lifts my castors off of the floor and makes it a bit easier for me to move along the slightly rougher surfaces such as the road and the cycle path. When my two main wheels arrive I will be able to move over grassy areas as well. Alison is not impressed with the new attachment to my chair as it means I can now travel ALOT faster than before over the rougher surfaces and down hill, well, she just catches me up when I have finished rolling and we walk together from there. I did however surprise both of us with how much easier it is. I know that it is about building myself up and keeping fit, but if you don’t enjoy it and it is too hard work then you do not want to do it. Especially for the same route every time, it can become frustrating, but now I am able to enjoy the walk, keep fit, look at the scenery as we walk and not be too knackered at the end of it. Because of this, I am hoping to do more than one walk a week to Ilminster, and I am going to see how I get on doing the return journey. The only thing I regret today was not timing the st-roll. It would have been very interesting to see the time difference but then as we took a different, more difficult route, it would not have benefited us anyway.

My Wife cooked a beef casserole in her slow cooker for tea. She had never used a slow cooker before but I think she nailed the meal today. The beef was absolutely perfect, it was like the beef melted in your mouth, no chewing required. Honestly, if you had no teeth you could have eaten it with no effort, it was amazing! I can’t wait to see what she cooks next.

And so that has been about it really for a few days, some laughs, some getting stressed about console games, (I keep getting dead), some tree surgery and some fitness. And now it is nearly the weekend where we will try and relax a little until Monday where it will all start again. Had a couple of rubbish bits of news today which have got me angry, worried, frustrated and irritable. It has put even more stress on our fragile relationship in the home and has got me wondering why we have bothered with a lot of things and why I don’t just admit that if there is a God, he has tested me and tested me and tested me to breaking point, and that he is going to keep testing me until I break, which won’t be long the way it is going. To that end, why not go and test someone who has never done anything for themselves in their life. It feels right now that the line is straight and despite my sticking to it, there is some bastard following who erases the line and repaints it with bends and curves which unfortunately shows that the line you have taken, in the eyes of everyone else, is not the one you were actually on.